Submitted by Insane Scatterbrain (@InScatterbrain) — 1 hour, 41 minutes before the deadline
Add to collection 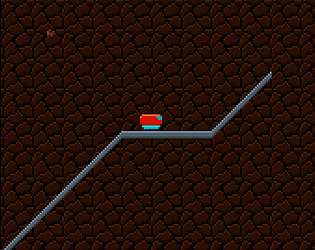 Which song(s) did you choose for the theme and how did you incorporate it/them?
I used Two Buttons in the game. It sounded to me like something you'd hear during an escape scene.

Which parts of the game did you create BEFORE the jam STARTED?
The tools and code that come with my own Unity asset: RetroKit.

Which parts of the game did you NOT create?
The music.

Nice job. Like you commented below the rocks can be really cheap at times either falling directly on you or at the top of a slope and you can't jump over. That tweak would help a lot. Cut and fun idea.

Yeah, that needs a little work. ;)

Yeah, I didn't have enough time to balance the difficulty, so it's a bit unfair sometimes. Visibility is part of the problem I think, maybe I should've made less steep slopes so you can better see where you're going. :)

Thanks for playing and for your feedback! :)