Sneaky-speady-cyber spider viruses try to crash into your files...
Submitted by BattleLicorne (@SamuelF55440958) — 56 minutes, 12 seconds before the deadline
Add to collection 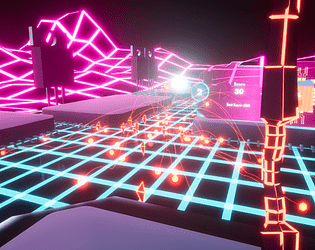 Gameplay Instructions
CyberBow is a virtual reality game made with Unreal Engine 5.

-- Oh it seems that you don't have a VR headset with you ? What a tragedy ! No problem ! Beside the VR version, we released an FPS version just for guys like you and with raytracing --

So where we were at ? Ah yes : what's the point on playing CyberBow ? Well, Cyberbow is about surviving a huge way of spider viruses who will try to sneak into your computer motherboard...

It is where you will act, Player ! First step : Take your VR headset with you and teleport yourself into the Cyberworld. Then arm yourself with the Cyberbow and smash these cyperspiders for us. Destroy them with the bow like if you are using it in the real world. But be aware that the more you smash them, the less easier they will be !

Try to play attention at the number of spiders that you missed, if too much viruses are downloaded, you will be desintegrated within the Cyberworld you played in...

Show us your bow skills and try to beat your little sister score. We're sure that you don't want her to tell her friends that she is better than you...


Be careful to choose the right version to play with:

The VR version is different from the FPS version but both of them are named in ".EXE". If you want to play the VR version, you need Steam VR to do it.


Soft required : Steam VR
Headset : HTC vive, Oculus (PC)
Touch A (Oculus) for to click on the (PLAY or QUIT) button with the help of the laser
For FPS version: press the key (E) and press the HUD button

List any content that was created before the jam.
We created all of the game assets. This includes HUD, gameplay, sound design, music, 3D assets.
And The game was finished and posted before the Game Jam deadline.

Really cool art style! I played with with my Vive Pro via SteamVR and was able to grab the bow and shoot arrows, but I could never get the game to start (or quit). I tried pointing at the menu and pulling trigger with my hand and I tried shooting arrows at it (and they did hit), but nothing seemed to work, so I wasn't able to get past your menu system unfortunately.

sorry to hear there was an issue. We originally build the game with the Oculus Quest. I'll tell our dev about it.

I'm sorry you ran into this problem, I have an oculus and I couldn't verify the inputs of HTC Vive :(

I dig the general aesthetics, but gameplay wise I found it rather difficult to aim and shoot the bow ( was playing with Rift S )

You need a good grip before you can hit, the game experience is difficult, whether in VR or FPS version.

PS (My shoulder was hurting after shooting)