It’s time to live your dream in this week’s itch.io Recommends post. Well, you’ll live your dream so long as you’re thinking of becoming a monarch or playing tennis. You know, those two common dreams. Anyway, read on for this weeks’ recommendations. 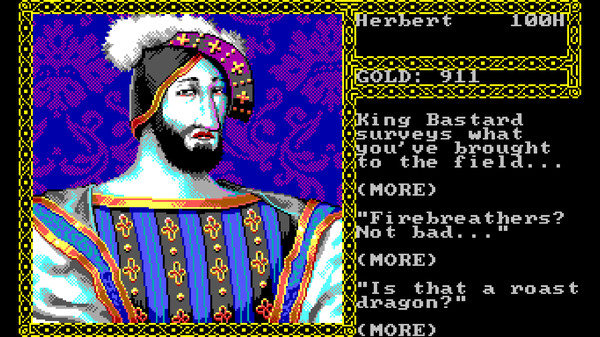 Fit for a King

I don’t think I’ve ever played a game with a dedicated marriage button before but hoodoggy do I love this thing. Fit for a King is the Henry VIII simulator that the world needed where you get to text adventure your way through the perils of managing a kingdom, several partners, and a name-able rival monarch. There’s a tongue-in-cheek comedy to the game that comes from playing a monarch with the sensibilities of a professional wrestler straight. At one point I was mashing my marriage button on every character I encountered and once I divorced/executed my current spouse the game was happy to let me marry just about whoever I wanted.

Unfortunately for me, my goofy reign was brought down by the exact things that made me love it. My philandering ways were my undoing in a way that was somehow both serious and hilarious. Fit for a King that is goofy enough to invite antics and just serious enough to punish them. I had a great time playing the game, but can’t claim to have seen most of the game. There’s a lot to do here and I’m hoping my next play session goes as well as my first.

Hot take alert: I maintain that Mario Tennis for the Gameboy Color is the best sports game ever made. It had an engaging story, massive open world, and the most accessible--yet-complex tennis gameplay I’ve ever felt. Evidently the crew at Pico Tennis feels the same way because they’ve managed to take the fundamentals that made Mario Tennis, update them for 2019 and somehow fit it all inside of Pico-8.

The controls are simple, you move in four directions, one button hits the ball and the other does a “power shot.” Yep, that’s it. No fancy nonsense here, just good old fashioned tennis. It’s a great ride and you can’t top the fact that it’s free.

Fit For A King
$9.99
Henry VIII's simulation sandbox. Marry everything, execute everything!
Kitfox Games
Adventure
Pico Tennis
Play against AI or with up to 4 players in local multiplayer.
Paranoid Cactus
Sports
Play in browser