Our favorite jam games of 2017

We’re huge fans of game jams at itch.io. We’ve got the best jam tracking page around and a good portion of our team takes part in jams on the regular. Even now, at the end of the year there are nearly 40 jams running on the site. Jam games are typically shorter and less-polished from games developed under more open circumstances, but a good jam game shows off the ingenuity of its development team. Here are a handful of our favorite jam games from 2017.

I feel a bit like a broken record when it comes to the Sofdelux catalog. They’re consistently fun, funny, and due to a team stacked with visual artists -- gorgeous. Disaster Log C continues this pedigree beautifully. Originally designed as a part of this year’s Yuri Jam, Disaster Log C is the tale of survivor of a seemingly unending rainstorm and their life aboard a boat with a murderer. This may sound like the set-up to a horror game or an asymmetrical multiplayer game (that actually sounds great) but it somehow blossoms into an adorable romance that will warm the heart of even the most cynical player.

As a visual novel, there aren’t a ton of mechanics to recommend as there is little outside of reading and deciding but DLC really leans into what makes the genre special. The characters have an interesting relationship and straddle the line between realistic and ridiculous which directly feeds into the surprisingly light-hearted story. 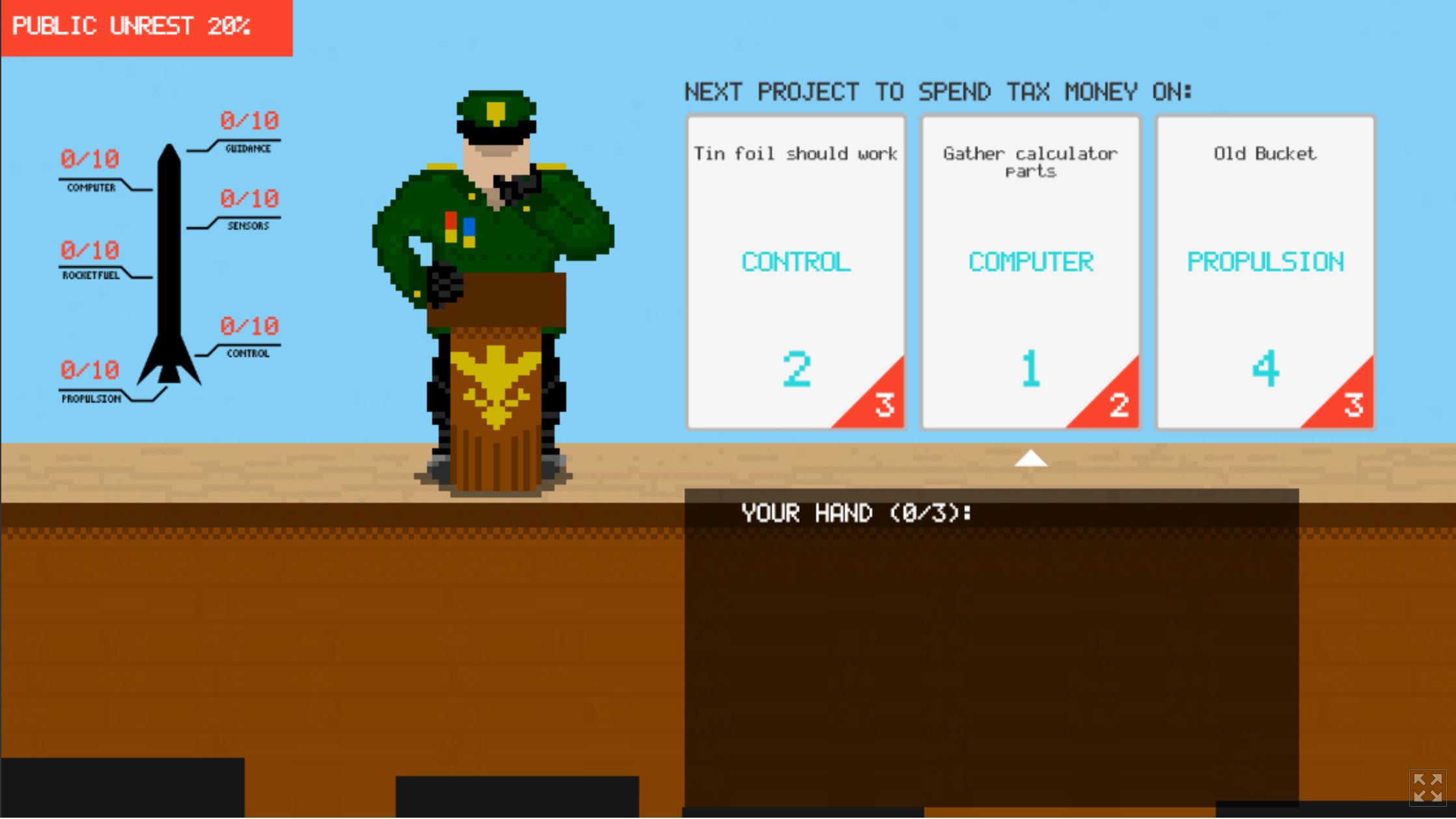 Who doesn’t want to be a malevolent dictator? Nobody? Just me? Oh ok then. Oh No! Democracy is the tale of a dictator with a dream: they want to go to space. Experience the thrill of building a rocket from discarded buckets! Build new playgrounds for your populace! Enjoy the peril of actively killing off your constituents to fulfill your own selfish plans!

Ok, in seriousness: Oh no! Democracy is a fun-yet-light resource management game that has you pulling cards from a deck while incurring costs in addition to fulfilling rocket-themed goals. It’s a simple and short game but feels like a spiteful look at the power systems that dominated 2017.

Deconstructeam knows how to perform in a game jam. Their first commercial release, Gods Will Be Watching was adapted from a jam-winning prototype, and now they’ve returned with the deeply impressive Engolasters January 2021. One of the most impressive elements of this project is how polished and expansive the game is despite being created under a firm time limit. The pixel art is dense and lush, the writing is interesting-yet-restrained, and the world is just curious enough to get you invested.

Engolasters is a sort of survival game, yes you’re managing continually dwindling resources but this is way more The Thing than Into Thin Air. I won’t spoil too much, but you’re hunting aliens while living with a team and contributing to a larger society as a whole. Yes I know that’s frustratingly vague but trust me, Engolasters January 2021 is great and about a totally real event that will definitely happen in 3-ish years.

Before we dive into the hard-to-pronounce astro-rhythm game Syzygy we should mention that this game is hard -- REALLY HARD. Sure the premise of timing button presses to the creation of the universe may sound simple enough, but what develops after a few levels is akin to juggling all of creation in your hands. On its face Syzygy is a straight rhythm game with two lanes of notes to watch, but as I began to float about in rhythm-space everything congealed into a really focused and fun experience.

At the core of any rhythm game is its soundtrack, and Syzygy doesn’t skimp on it. Sure the beats are minimalist and light but they add an alien texture to the lo-fi visuals that feels like what space would sound like if it could conduct soundwaves.  If the screenshot above and this light description seems at all intriguing to you, you’ll probably love Syzygy.

Jam games not your thing? Come back next week for another year-end round up or take a look at our favorite free games of the year.

Well this was unexpected! Thank you so much for including "Oh No! Democracy!" on your list :)

So honored to have Sofdelux mentioned! Thanks a ton! <3

GIF
SYZYGY
A rhythm game based on aligning the stars [agbic17 post-jam]
borbware
Puzzle
Disaster Log C
It has been raining ceaselessly for 7 days...
Sofdelux Studio
Visual Novel
Oh no! Democracy! (Ludum Dare 39)
A little card based game created in 48 hours for Ludum Dare 39. Build your rocket before democracy robs you of power!
Tim Eriksen
Strategy
Play in browser
GIF
Engolasters January 2021
The events depicted in this game are based in a real incident that will happen in January 2021; Engolasters, Andorra.
Deconstructeam
Adventure