Games of the Month: Treachery in Beatdown City, Mackerelfish Media and More!

We’re back, back, back again with a brand new edition of itch.io’s Games of the Month! Yes I know it’s been a bit longer than a calendar month but that doesn’t mean the games are anything less than amazing. There are a ton of different genres represented here and something for everyone to love. Read on for the full details.

Despite overwhelming evidence to the contrary, good things are able to happen in 2020. Treachery in Beatdown City, the Beat ‘em Up/ Tactical RPG hybrid has and is just as good as I’ve been hoping for all these years.

If you are anything like me, seeing Beat ‘em Up and Tactical RPG listed next to each other is confusing. One genre is known for slow strategizing and the other speedy button mashing. It’s an odd couple to be sure but it works surprisingly well. Once you move into combat from the game’s overworld you are dropped into a pretty traditional Beat ‘em Up screen. You’re pacing back and forth along a (mostly) 2D plane and trying to work your way through crowds of enemies to deliver some street fight-based justice. What makes Beatdown City’s approach unique is that at any point you can hit a button to open a menu of skills which use the game’s quickly replenishing skill points. Not only do these attacks do more damage than your non-menu based ones, they apply status effects which then open your opponents up for more attacks and damage. It’s a really smart system that ends up opening up massively as you unlock more moves and characters.

Narratively Beatdown City is set up as the explosive tale of rescuing a kidnapped president from ninja terrorists, but the game finds its footing in its portrayal of the problems affecting developer NuChallenger’s real life home of New York City. Gentrifiers, racists, cops, and joggers are all on full display here and while this may seem a bit heavy, Beatdown City is funny -- really funny. It’s rare for me to laugh this often in a game, and even rarer for me to laugh this consistently. Every element of the game’s presentation is a vector for goofs and there’s a real sense of banding together and supporting your pals through comedy. Throughout the game’s modest play time I was tickled by its insistence that while things may be bad now, you can still find pockets of joy in the darkness and honestly, that’s exactly what we need in 2020. 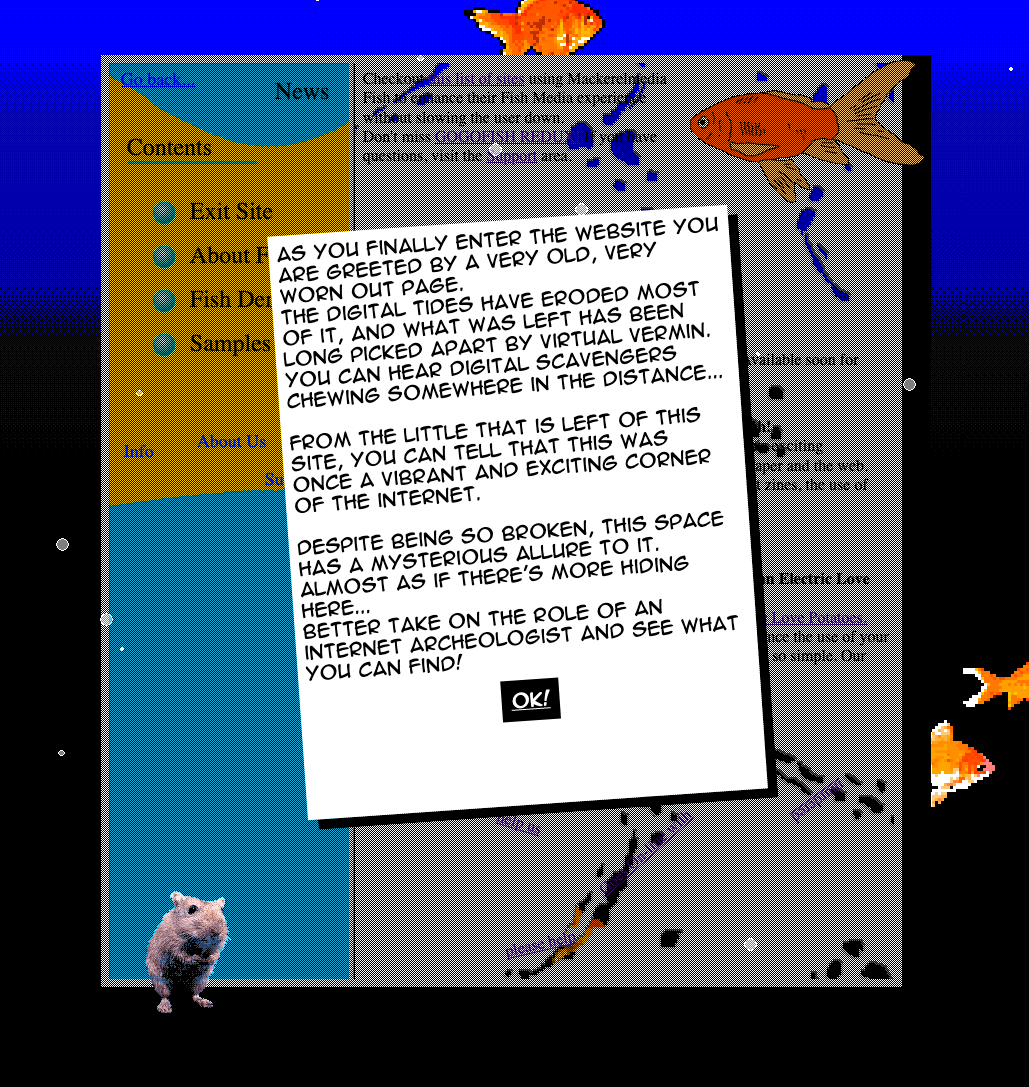 I love a good alternate reality game (ARG). At their best they’re vectors for people to come together and sort through really obtuse clues to progress a strange narrative. Famously these sorts of games have involved running files through spectrographs, hiking out to the middle of nowhere to dig things up, and occasionally entering buildings fully staffed by actors. Unfortunately ARGs can only be played once which leaves the rest of us to play archaeologist reading through forum threads and Wikipedia pages if we miss the boat. Luckily for everyone else who wants to play an ARG but can’t drop everything to play an ARG for weeks/ months at a time Friend of the Blog Nathalie Lawhead has released their very own ARG, Mackerelfish Media. Much like a normal ARG there is a mysterious webpage that requires investigating, but unique to Mackerelfish Media is the fact that all of the players involved are cute fish. The dev says the game is designed like archaeology and it’s a sentiment that comes through in the game. Much like coming to a normal ARG late, something has gone down before you showed up but this plays with that fact repeatedly. But what really sets Mackerelfish apart is the fact that this ARG is played single player. Sure you could talk to some friends about it, but there’s no “call your friend in rural Canada to drive an hour and a half to dig up a capsule in the woods” element here. If you’ve wanted to check out this weird genre but were too scared to jump in, this is the perfect chance.

There was a scene in the early to mid-2000s dedicated to making horror games in RPG maker. Somehow the engine dedicated to making turned-based RPGs got bent into providing scares for a generation of indie game developers. The sub-genre died out by the 2010s, but Project Kat harkens back to this era in a bunch of great ways.

The tropes of the genre are largely present here: you’re a spooky high school girl in a spooky school in the (spooky) middle of the night and just like those old games, the mechanics are largely based around talking and exploring for items. Fortunately the puzzles in Project Kat are a lot less obtuse than its predecessors which gives the game’s writing and characters more breathing room to really come into their own. The game itself will only last you one or two play sessions but it was more than enough time to make me like the small cast of characters in the school.

That said there are some clunkier elements to Project Kat that are more-or-less era accurate for the early 2000s but can potentially put off some players who are less experienced with the genre. I’m specifically thinking of the game’s menu system, but none of Project Kat’s rough edges are enough to keep this great little game from shining.

This, Too, Shall Pass

I hope you’re quick, because this game won’t be available in about a week. This, Too, Shall Pass is a game of exploring a beautiful desert but it's more politically minded than you are probably expecting. TTSP is an art project highlighting what we’ll lose in the climate crisis. This build of the game highlights the desert but there are a pack of USBs roaming the world with other biomes on their version of the game, all of which are tracked on this Twitter account.

I’m not going to lie, the content of TTSP that is installed on your harddrive --while good-- is less interesting than the content that the game generates in your mind. Considering the real life implications of our global lifestyle is sobering but becoming more important by the day.

If you’re a bit too slow to grab TTSP (or if you want to support the developer) there’s also a purchasable “b-side” to the game called This Too Has Passed which acts as a sort of epilogue to our planet.

It’s not often that I get wowed by a demo, let alone one for a puzzle game but Sizeable breaks the mold. On one hand it’s a game about resizing the elements of the world but this combined with the game’s diorama aesthetic makes for a really engaging experience. Each of Sizeable’s puzzles comes in the form of a small stage with a handful of interactable objects scattered throughout. Where the puzzle solving comes in is in the fact that each object in a stage can be grown or shrunk via the mouse wheel.

There’s a real playfulness in how you solve each of these stages as well-- on a beach level I made the moon smaller to lower the tide, in a jungle temple I was stretching and contracting snakes. These stages are all unique in their settings and solutions but because this is a demo there aren’t many to go around. Top to bottom this demo is going to take you a half an hour if you’re going slowly, but there’s hope that the team will go on to make a full game out of this really promising slice.

What have you been playing lately? Let us know in the comments below!

Awesome! We had an absolute blast with Mackerelfish Media.