*SPOILERS* if you aren’t finished this ending 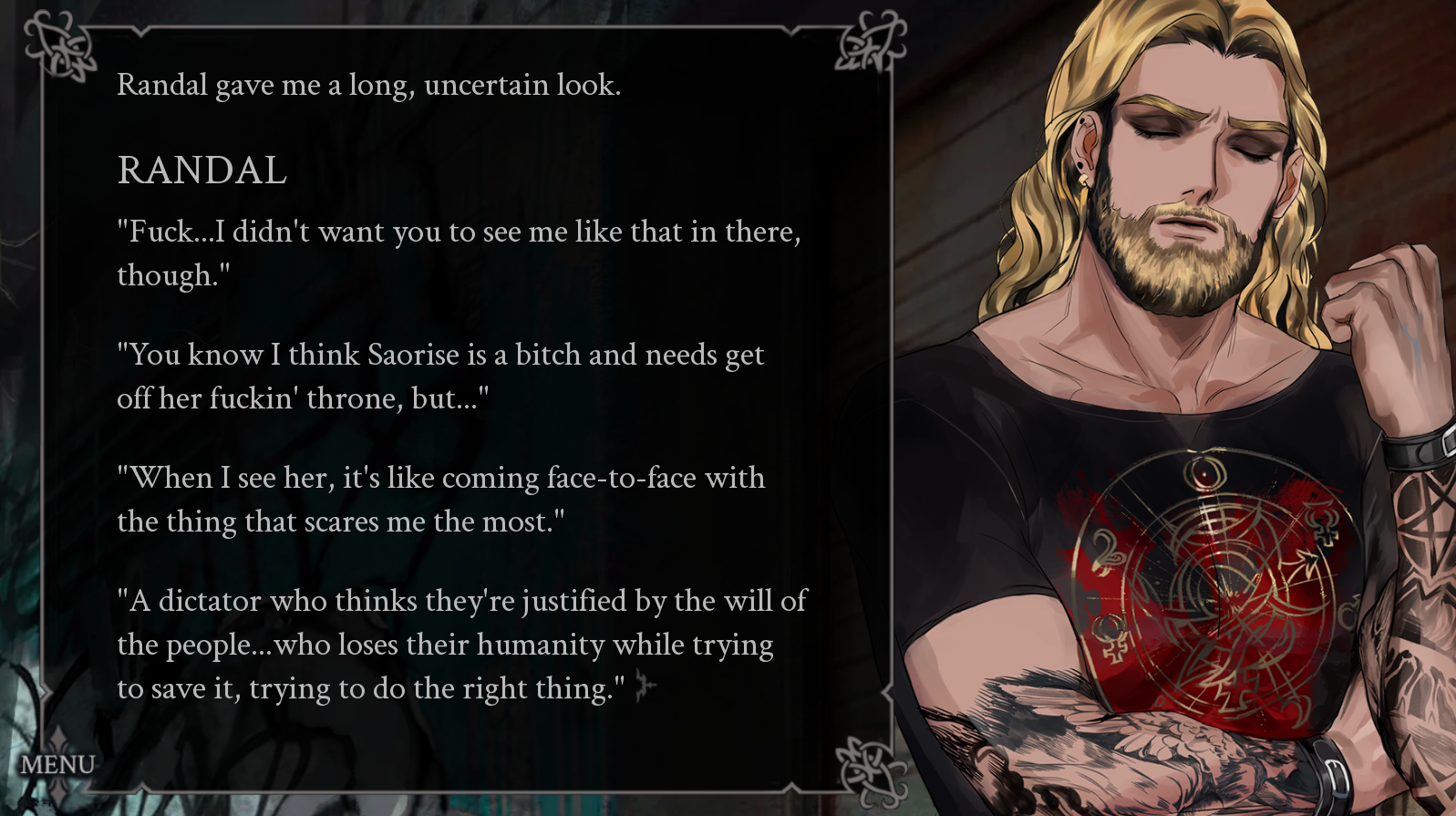 Can we just talk about that for a moment?

I have DEVOURED this content so far (Except for Marcus’ special end so far). Last night I finished this route for Randal and I just can’t stop thinking about it and trying to headcannon my way around it. Soul destroying!

I understand that the game is not a dating sim and that the story is not a romance. This story is… a tragedy in essence. I honestly love it. The romantic and gothic 90s undertones are on point. Hell, give me Rice over Meyer any day. Still, this one shook me to the core. The fact that he turned into something that he feared so much is just crazy nightmare fuel (I did have crazy nightmares about it last night).

Full disclosure, Randal is my favourite character I deeply sympathized with him (and his demons) and that is maybe why I want to discuss this one so much. While Heath’s endings left me feeling sad, I did not greatly empathize with his character and even on replays straight out had to roll my eyes at some of his narcissism.

I wish we at least have the option to unlock (bitter)sweet endings for each character after we understood them more completely. But the fact that we can't and have to accept the horror is what will make this game memorable to me. I really wish there was a way to replay, to have more choice over outcomes (ie to help Heath step back and into his own will or to guide “Randal” out of hiding slowly instead of so suddenly with no consideration) but I guess the whole point is that there isn’t.

Some criticism though: I did not appreciate some of the conversation choices that MC was given—especially around their sexual encounters and especially with Randal. There was something so abhorrent to me about either having to confirm “Randal’s” fears about him being too corrupted/dirty and have that crazy sex scene or… confirm that he was too corrupted/dirty and say that he was “right”, and implying you shouldn’t “dirty” yourself with him since you were responding to his statement. All responses were nothing I would dream of saying to anyone EVER but I think it is heavily implied that Randal is a victim of SA… and oof. Maybe this wouldn’t be a trigger to most people but holy hell I had to close my laptop.

I think that most of the fan unease about how the game approached these scenes is warranted. I understand that the story is trying to unnerve us but I wonder if they could have done so without being so sex-negative.

I don’t want to harp on the game—I still love it. The responses were scripted to add to the tense and tragic undertones of the story. Other than that haunting little detail I greatly appreciate the tension and word-building.

Anyway, some questions for you guys:

1. Who do you think that phone call was from, the one right before you visit Marcus’ shop where you could hear a male voice crying on the other end?

-are we supposed to think it was from an over-loaded and weary Randal?

2. What house do you think that “Randal” belongs to?

-this one I really want to know. He is described to have “glowing eyes” a couple times which could indicate Gol. His perception and the way that “he can usually detect lies” could really be either.

3. What the hell were those bandages for anyway?

Tl;dr: Wow that was messed up—tell me what you thought!

I've really enjoyed this game! It is very grim and like you say it would have been nice to get some happier endings with Randal and Heath. In my own headcanon I at least think in the endings where they stay with you, as vampires you have eternity to try and make things better, it's only been a few months in game.

In answer to your questions:

1. I'm not certain, but it only happens if you have Randal as a mentor and he's close to you, which makes me think it's him.

2. I definitely thought Golgotha because of all those drawings he does, both the weird figures and nonsense words. I didn't pick up on the lies thing but that makes me think Gol too.

3. I don't know! That's what I googled to end up here :-) It does mention at one point he makes them bleed by digging his nails into his palms, maybe be does that in his sleep?