I had to. I love this scene so much I had to replace my last background. 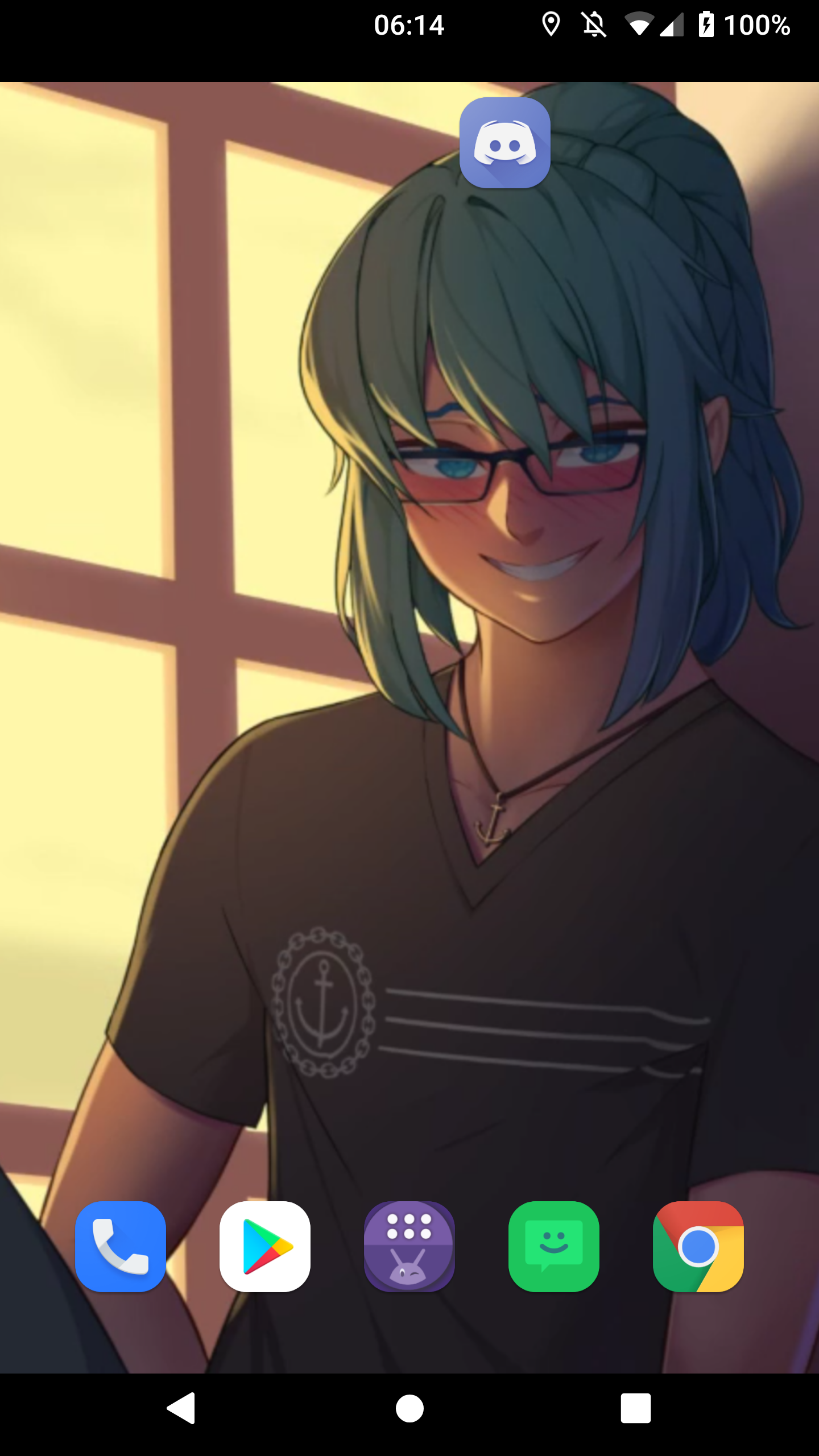 Okay. I love the concept anyway! Thanks for clearing that up.

Since they're asking about art styles for a Cove older than he will be in Step 4, I figured it'd be a sequel, but it's true they haven't revealed much. I haven't gone through all their posts, but I haven't seen anything that specifies what OL2:N&F will be like.

I'm guessing David's never going to have a route?

I know this is Tom's route update, but I like to re-read other routes when the game updates and there's some issues with John's sprite at lunch on day 2 of his route.

First his sprite drops to where his head is just above the dialogue box, then his body disappears. His disembodied head 'bounces' up and down when Tom comes by later (while hilarious, likely not intentional lol). Maybe you've already caught these and have fixed them in the next build, but just in case I thought I'd point them out. 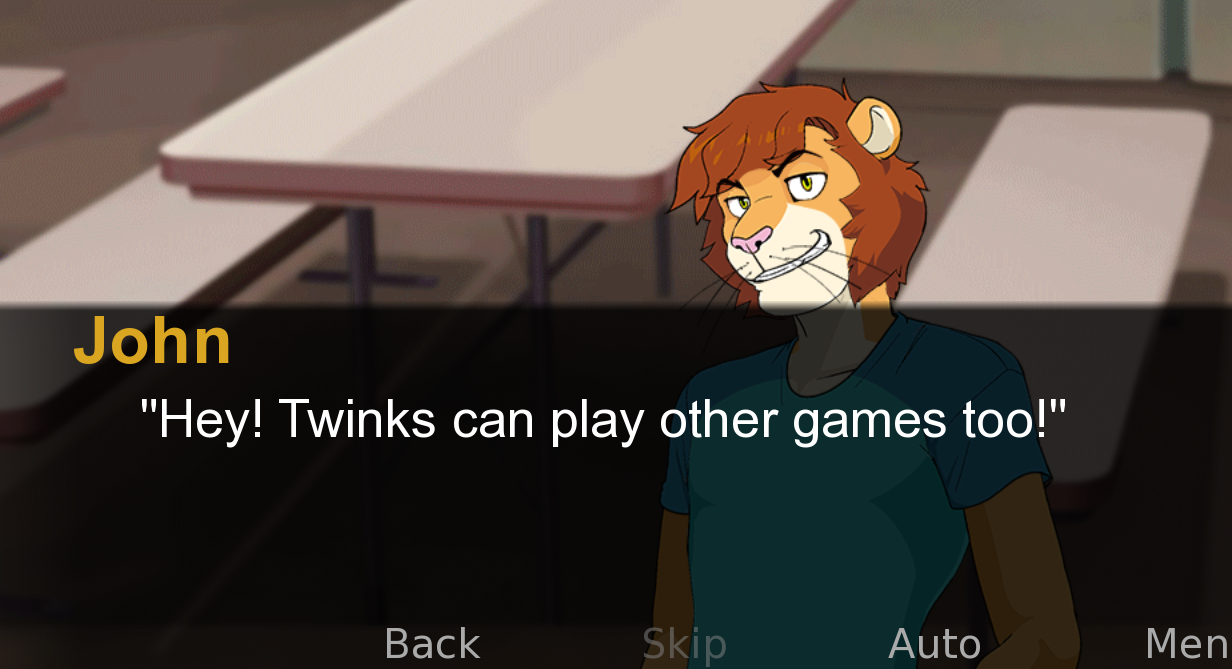 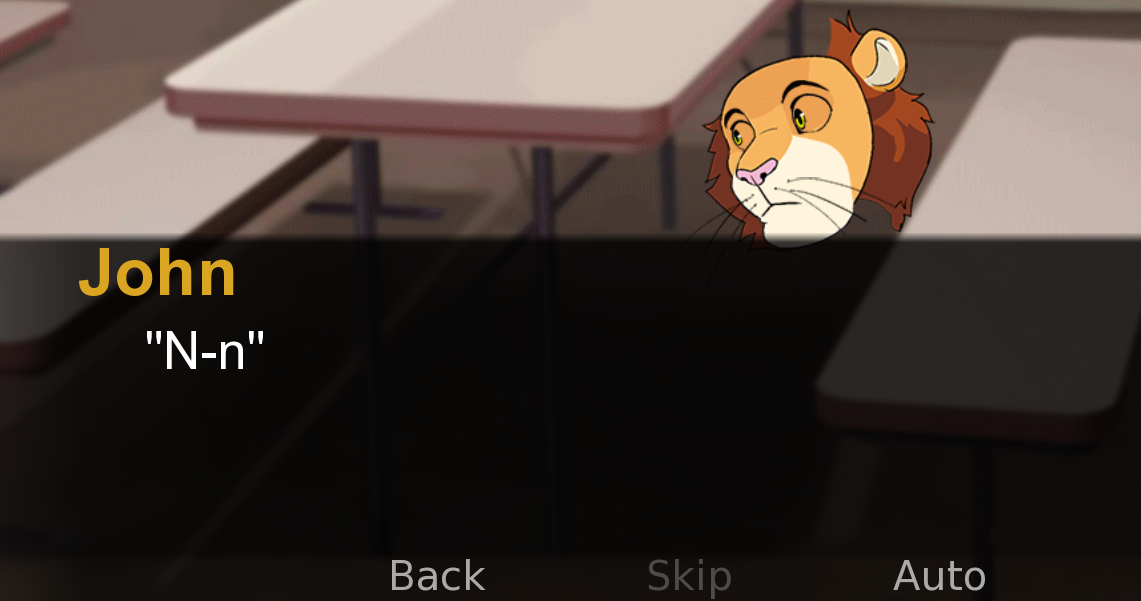 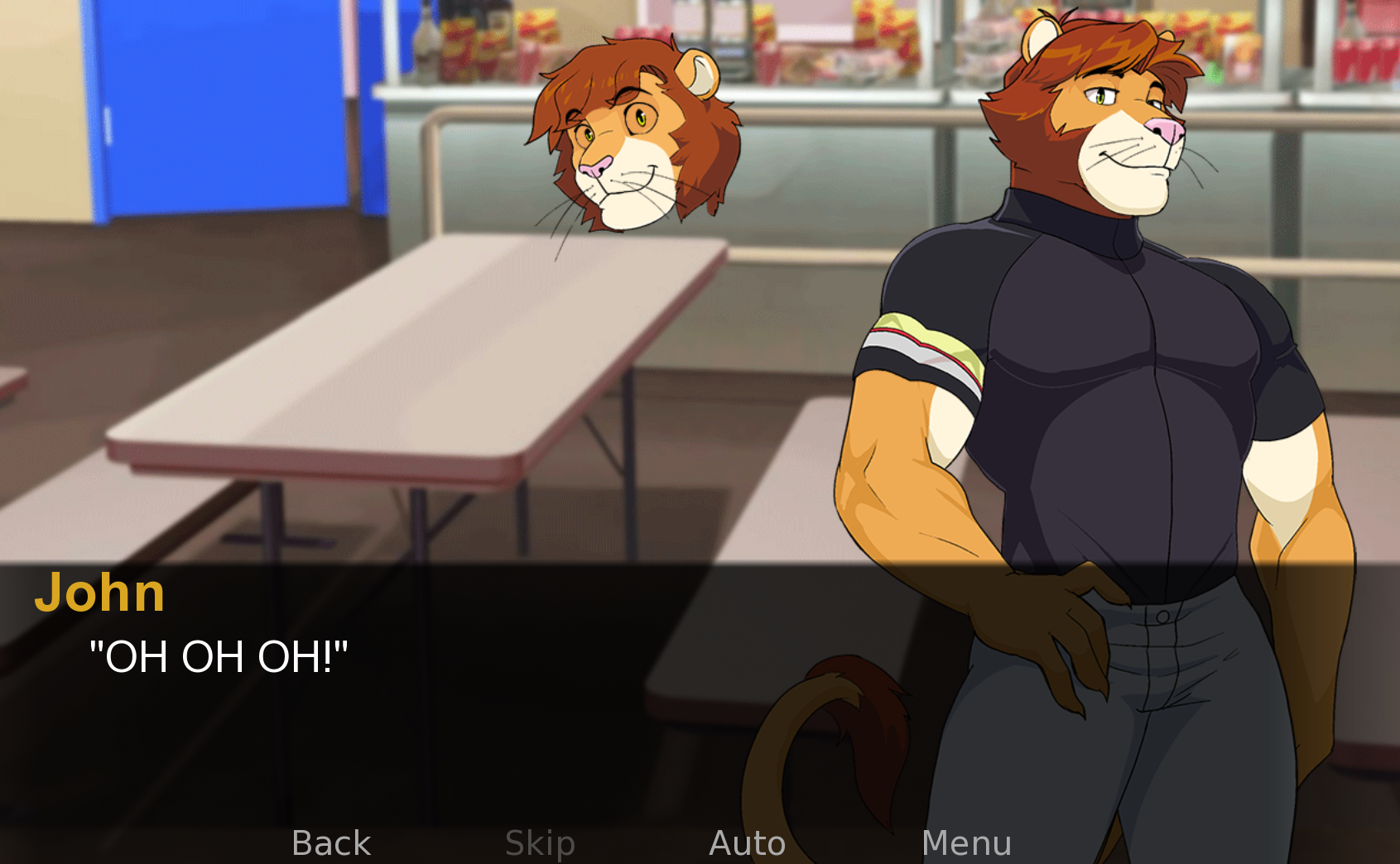 They do already have plans for a sequel. They've discussed it on their Patreon.

So, I didn't even go 5 minutes after finding out about the release before buying the DLC. Since the release, I've lost track of how many times I've played. The first time after the release I cried several times while playing because some scenarios hit really close to home (it was a good, much needed cry).

Seriously one of the best, if not THE BEST, game I've ever played. I'm waiting so impatiently for the Step 3 DLC, but I'm trying to reign it in. I know perfection takes time!

Sad to see my Jeremy be so angry, but kinda cool to see how he was before entering high school. I couldn't imagine him being angry when I played XOXO Droplets, now I'll always know how much of a jackass he truly was...

Kinda wish the Android DLC played nicely all together rather than having to install it whenever I get to that Step, but I keep playing on my computer anyway.

Apparently most of us prefer the digitigrade legs.

When I think of Ferals seamlessly switching modes, I think of werewolves in Skyrim. They fairly easily go from two-legged walking to four-legged running.

One person said that if they're kicking then human-like legs make more sense and I disagree.

Think of a kangaroo, they balance on their tails to kick.

Cats use their front legs to hold onto something, then use their back legs (and claws) to rip into them and can then easily let go and run away.

Since dogs lift their legs to pee on things, it's not hard to imagine their knee extending a bit to kick their opponent.

Just a few examples off the top of my head how even with digitigrade legs the ferals would have no trouble fighting.

I'd recommend not bothering to reply to comments like that, Ranli... It's just someone being mean to be mean. They're not even giving any constructive feedback, just bashing your hard work (what happened to "if you can't say anything nice, don't say anything at all"? Is that void on the internet?)

I admit the MCs stupidity annoys me at times too, but I love the work you're putting into the game and look forward to the updates every time. It just keeps getting better and you even go back over the older parts to enhance those. It's awesome. So few pay attention to the older content in addition to the newer.

It looks like a lot of people are having issues installing the full android version.

If you know how to copy the demos backup data somewhere else then you should do that (Google it if you don't know how).

The demo then needs to be uninstalled before installing the full version. If you open it just to the main menu then the folder will appear in android and you can copy the demo files over (saves will probably work? I just started over.)

I didn't have any problems. You need to uninstall the demo first. That seems to be the issue most people are having.

I didn't have any problems. Did you uninstall the demo first? That seems to be the issue most people are having.

Everything for that price.

I'm enjoying the game as I knew I would when I played the demo, however I encountered a few errors while playing on android.

Choosing to take a pic of Arlie leads to this (repeatedly): 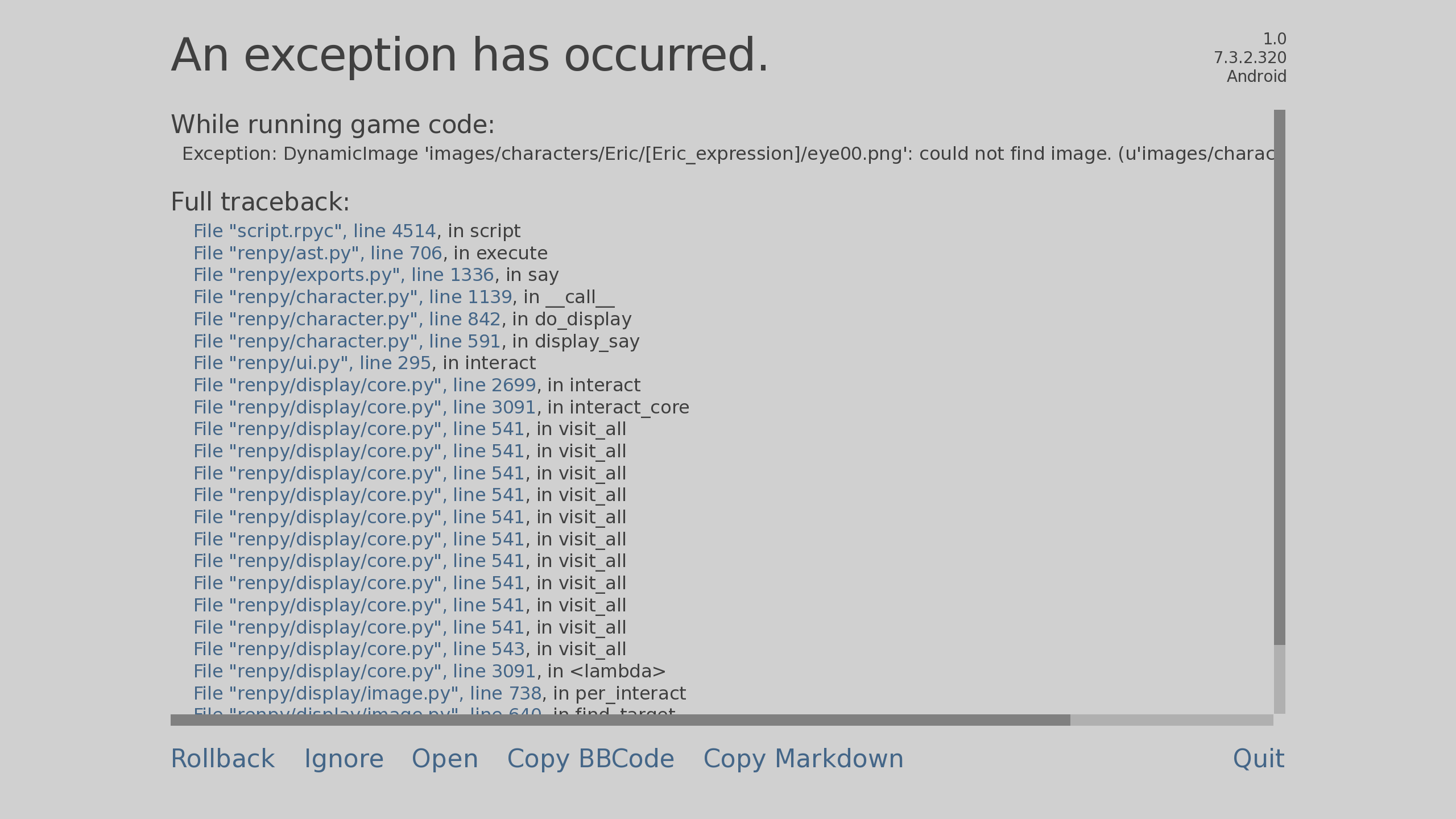 Convince 'friends of Louis' has this one before showing the ship map: 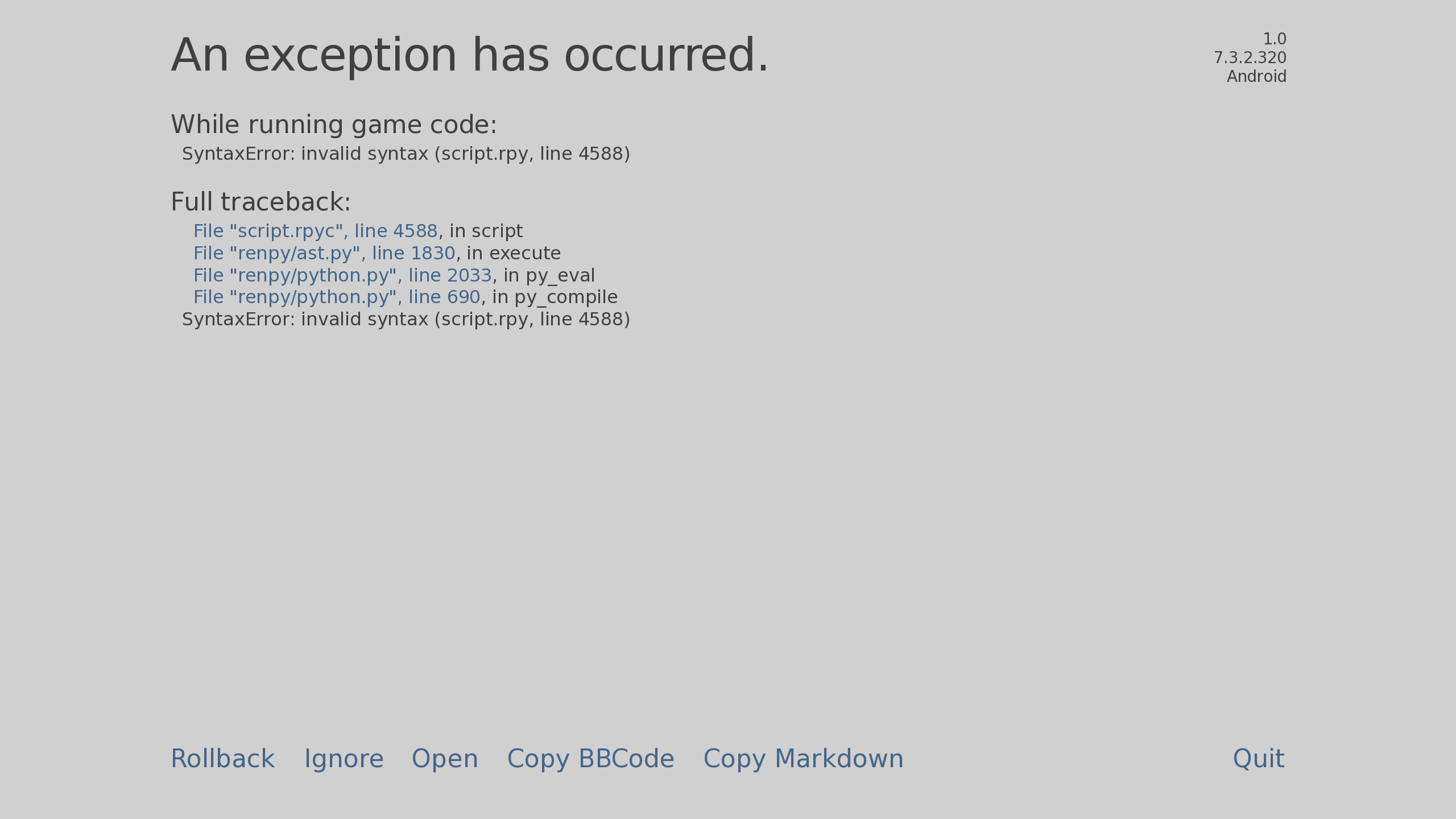 I'm certainly enjoying it so far, though some of the text is hard to read with the colors chosen.

"Is a pizza a sandwich?" Yep. Watched the Food Theory on the Food Theorist's channel. Laughed my ass off reading their arguments though lmao.

Too bad... Daren's my favorite as well... I'm guessing it would be too much to ask to make them step brothers instead and make him dateable?

Just started it, I just arrived at the cafeteria, but I think it would be adorable if Zale can't help but blush at Jayce's super innocent cat look... Maybe David too.

Will there only be the four love interests?

I'd love to see more, but I freaking love John and Rask, so I won't be disappointed if the main four are the only ones that ever will have routes, or if you focus on them and add more when their routes are finished.

Haha, yeah I understand. I wasn't trying to rush you or anything, it had just been a while since the last update so I wanted to know if it had been abandoned or something. Glad an update will eventually come, but yeah focus on feeding yourself and your poochy!

Is there an update somewhere on the horizon, by chance? I found it surprisingly hard to put down once I started.

Awesome, an update! Thanks for all your hard work!

Despite being a "shitpost dating sim", this is one of the funniest best dating sims I've seen. It really would be awesome if there were updates in the future. Nice Ace Attourney reference.

Kay, finished the game first with the bad end then with the good end (didn't take long to figure out what I needed to change). The good end is hilarious...

I really hope you're not dead and will come around to add to the game at some point. 3;

I'm another +1 for a Mochi route, and save function. If you're not planning to come back to it, it'd be awesome if you could give someone the source materials to continue it instead.

I said I'd post again when I tested it, so here it is.

It's a good start, obviously not a lot going on yet. On the first choice I picked 'No' just to see where it went, and naturally got nada overall. I laughed at it though! It was a cute way to be like "Nope, don't choose this (yet?)"

I look forward to seeing more.

Also, as has already been requested, a save/load feature would be nice.

Yeah, even your reply only appeared on my phone once without a problem, then I couldn't get it to appear anymore.

For whatever reason I couldn't bring up this page on Android Chrome, but had no issues on PC Chrome... Had to download the .apk on my computer and transfer it to my phone. I don't know why or if there's any way to fix it. Maybe it's the name of the game or something? I don't know.

Anyway, I'll post again after I've actually tried the game. Just wanted to give a heads up on the Android browser issue. It could just be my phone, but there could be some people unable to try the game if they can't access the page.

A guide would be nice for this game. I finally figured out how to NOT date Elias after some trial and error.

Given there's 4 sempai and 8 endings, I assume that means there's good/bad endings for each character, but I can't get Elias's bad ending or Jerico's good ending... I haven't tried with Genesis yet, and accidentally got Shania on my first playthrough (correctly finishing most quests) and a bad ending for her... somehow.

I feel like Rask's charm is back~ Sooo happy with the changes now, he's so adorable. Still my favorite. <3 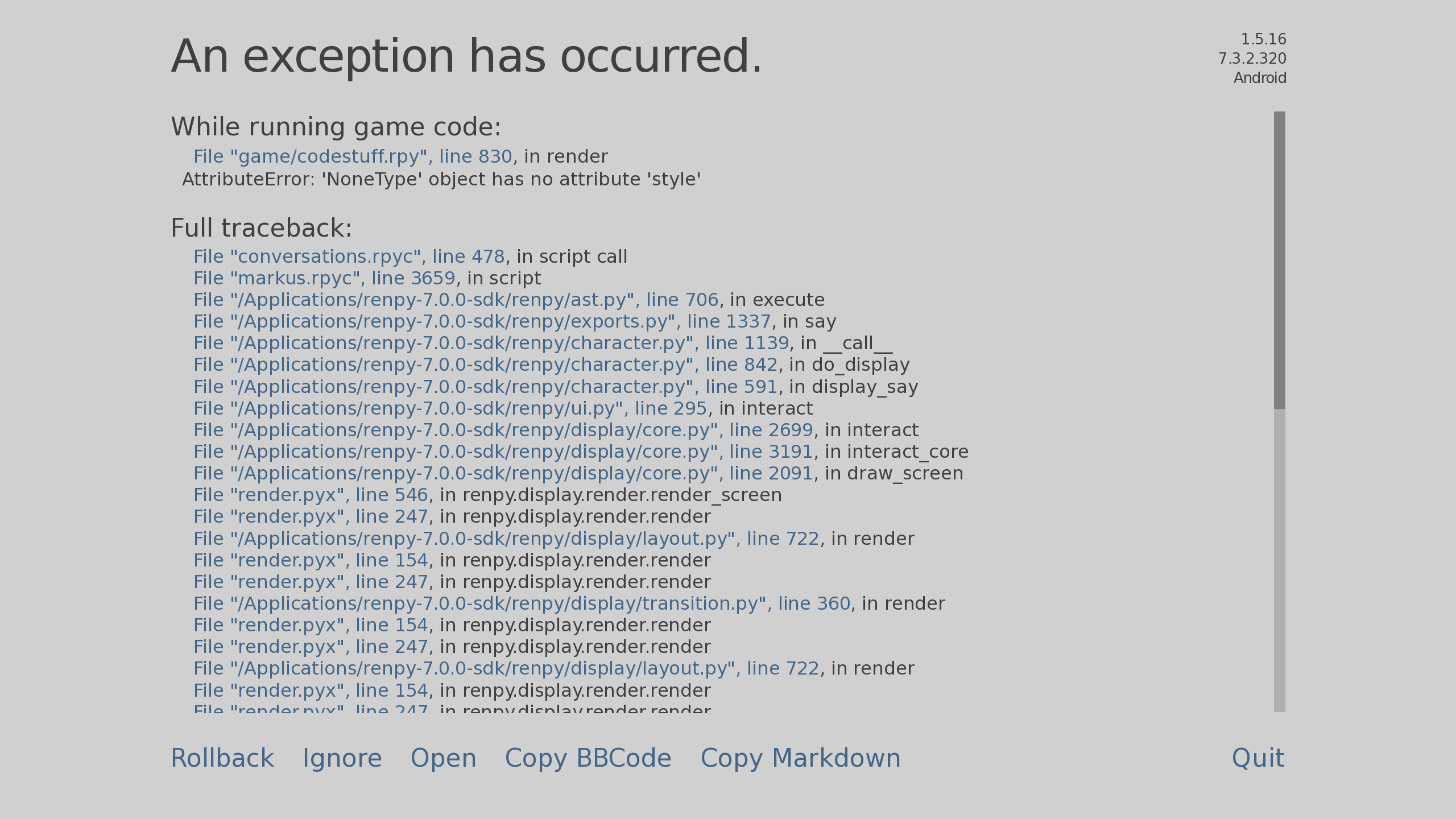 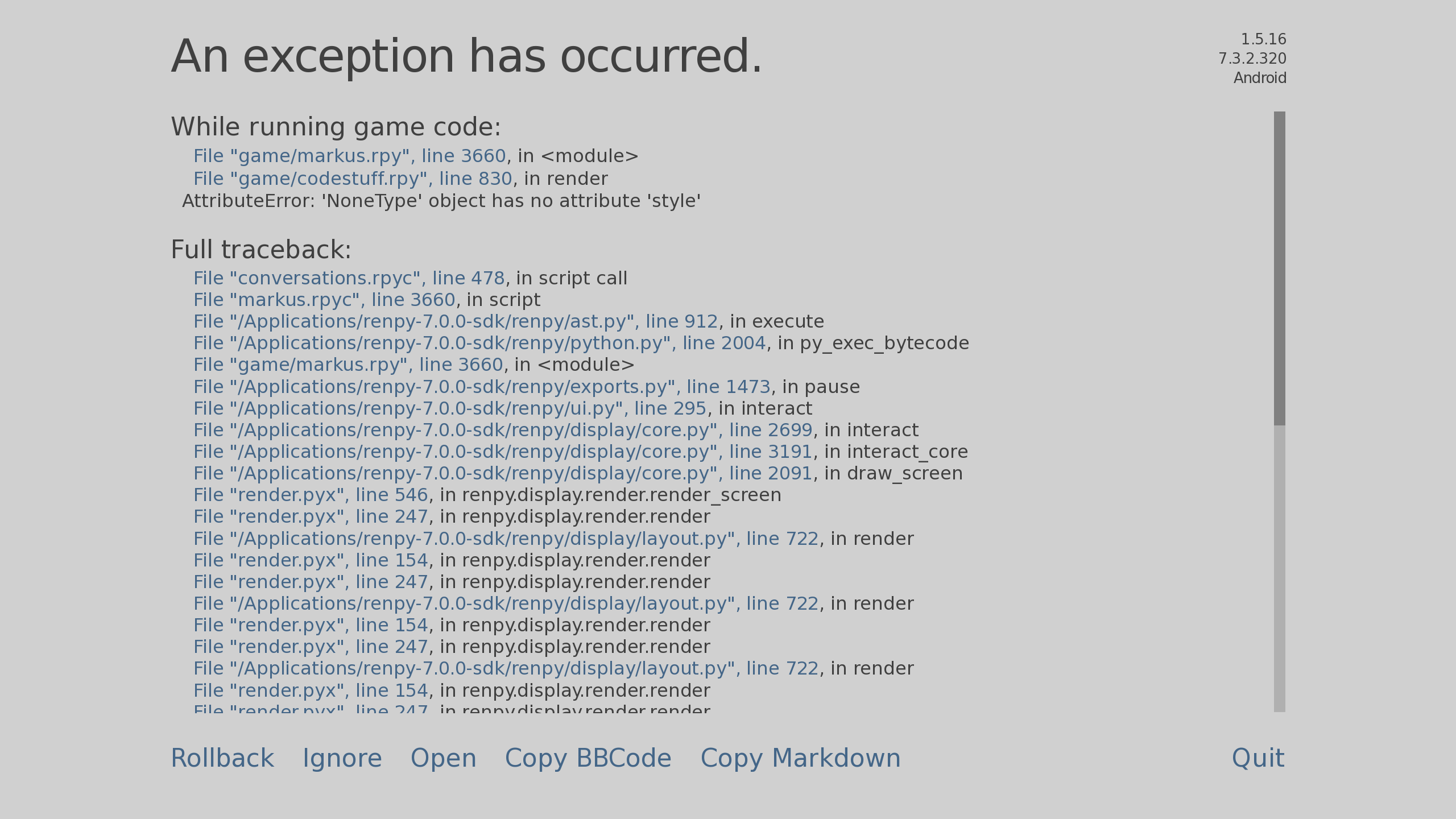 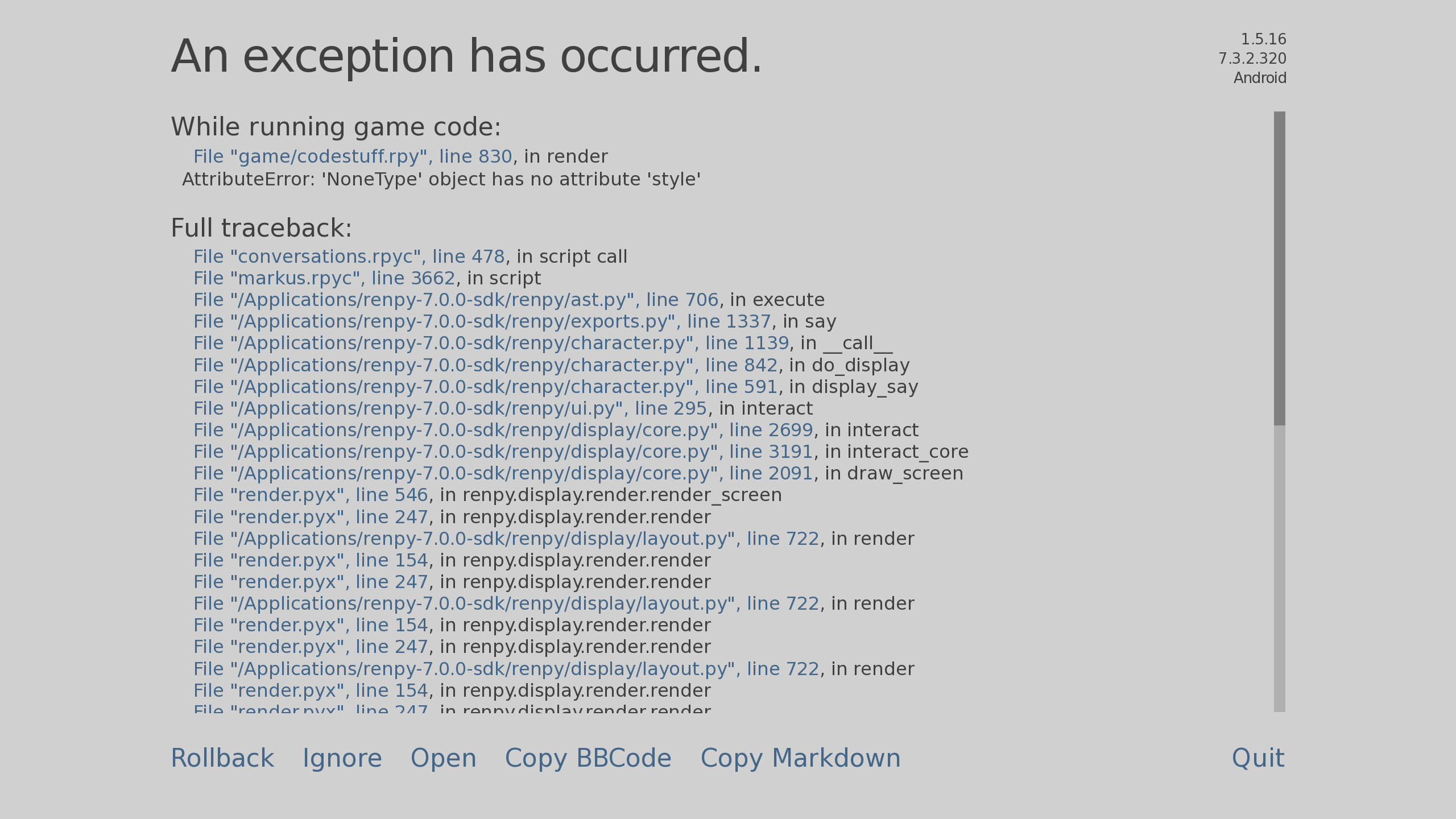 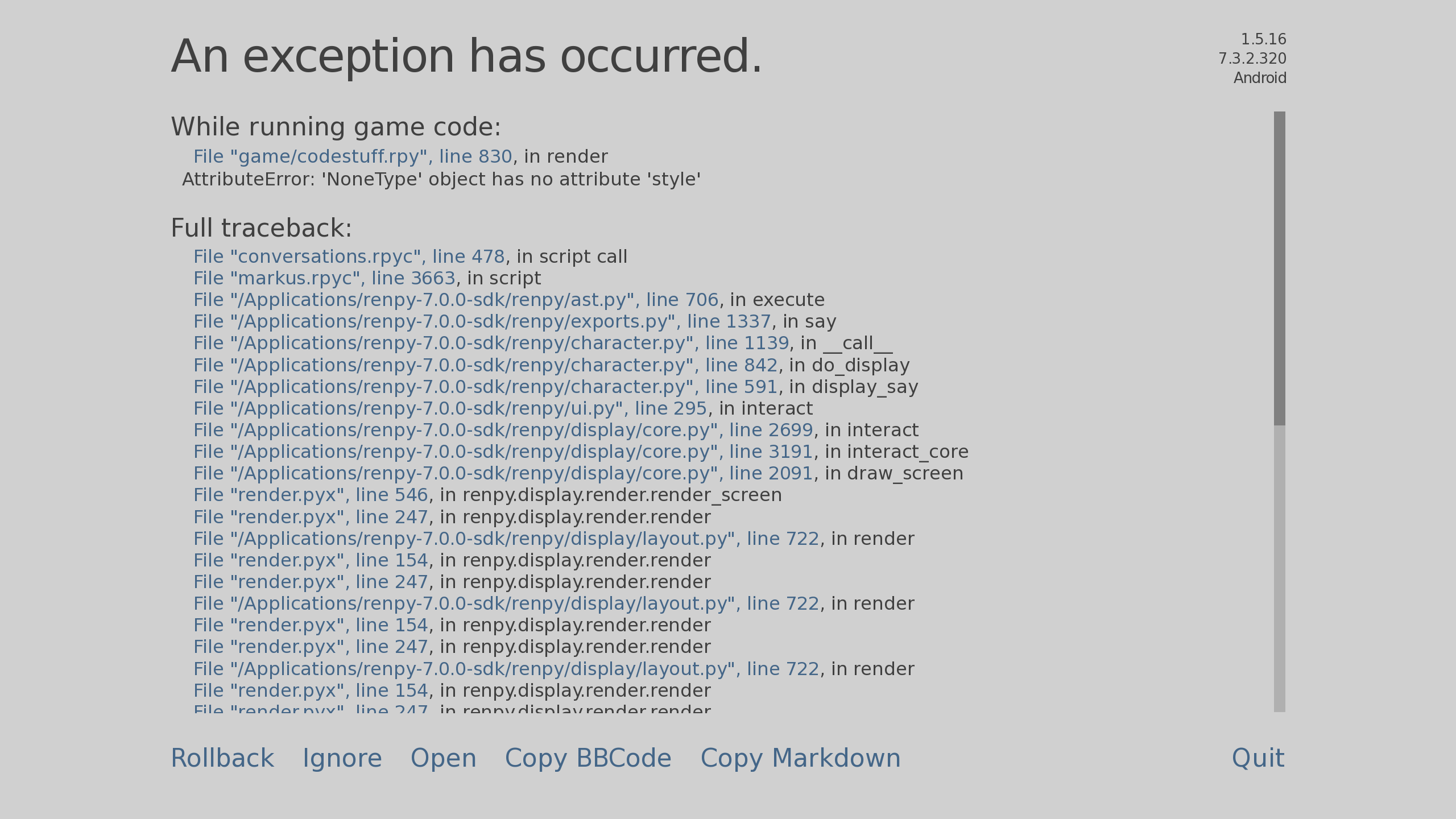 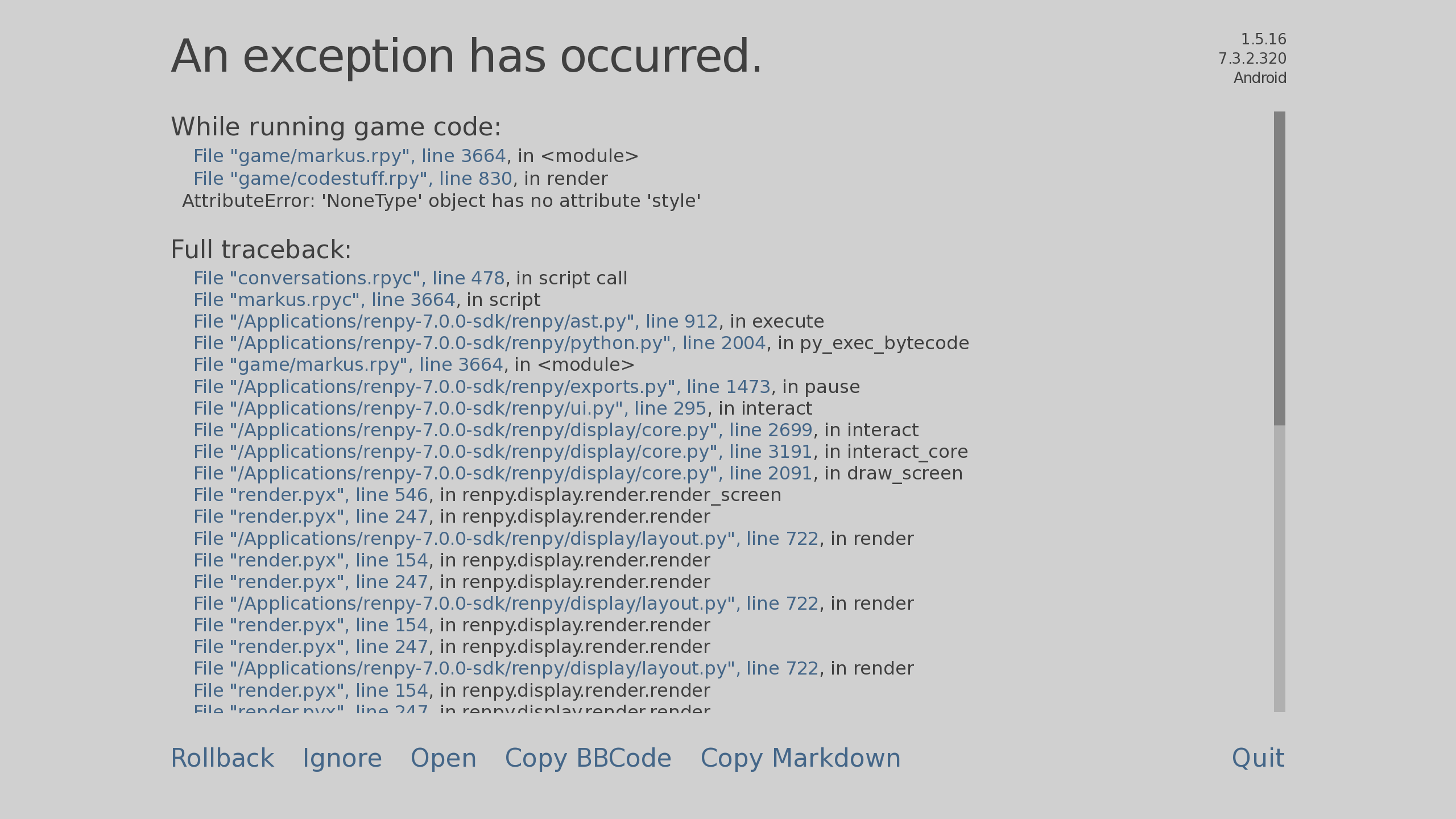 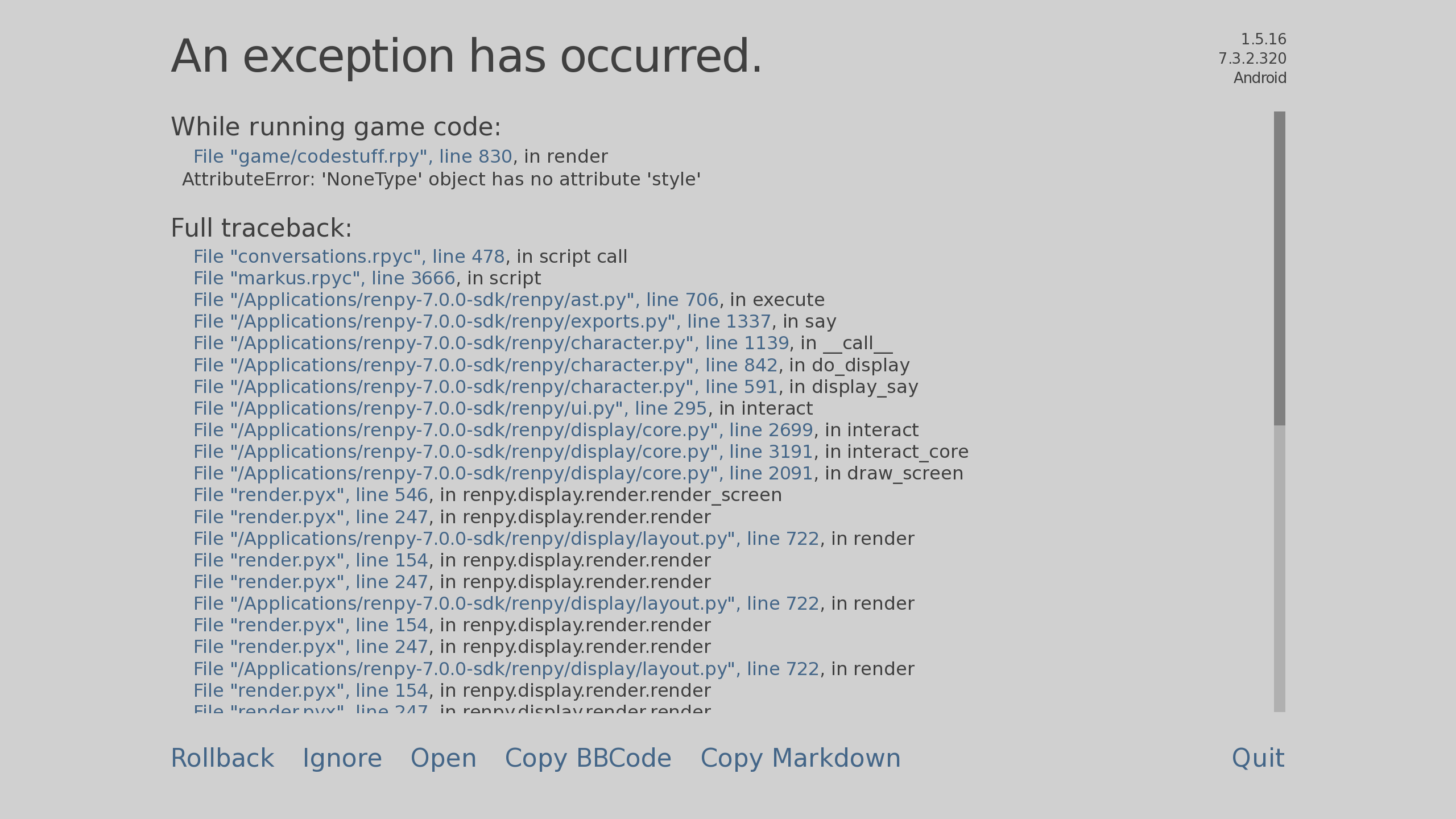 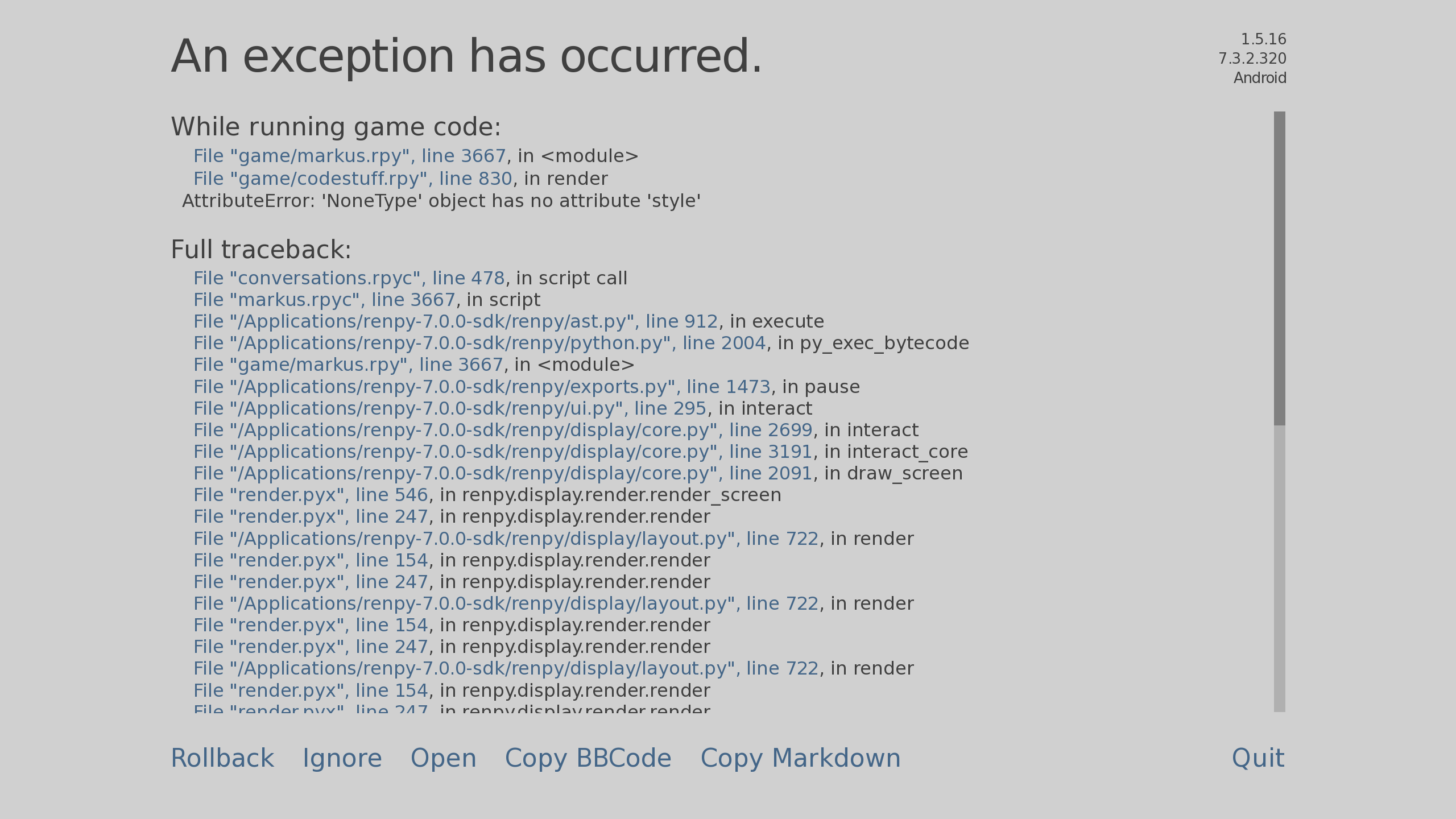 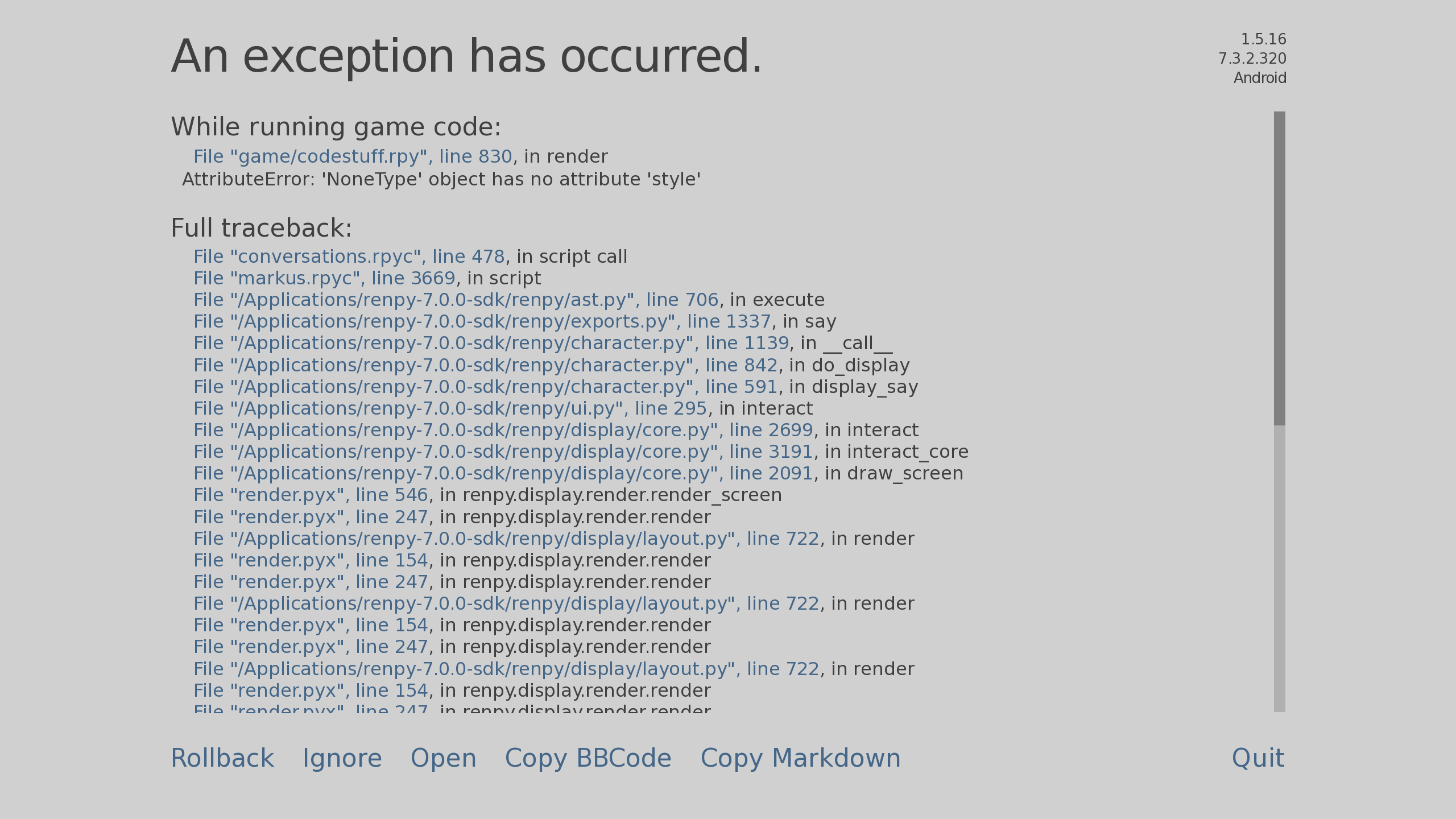 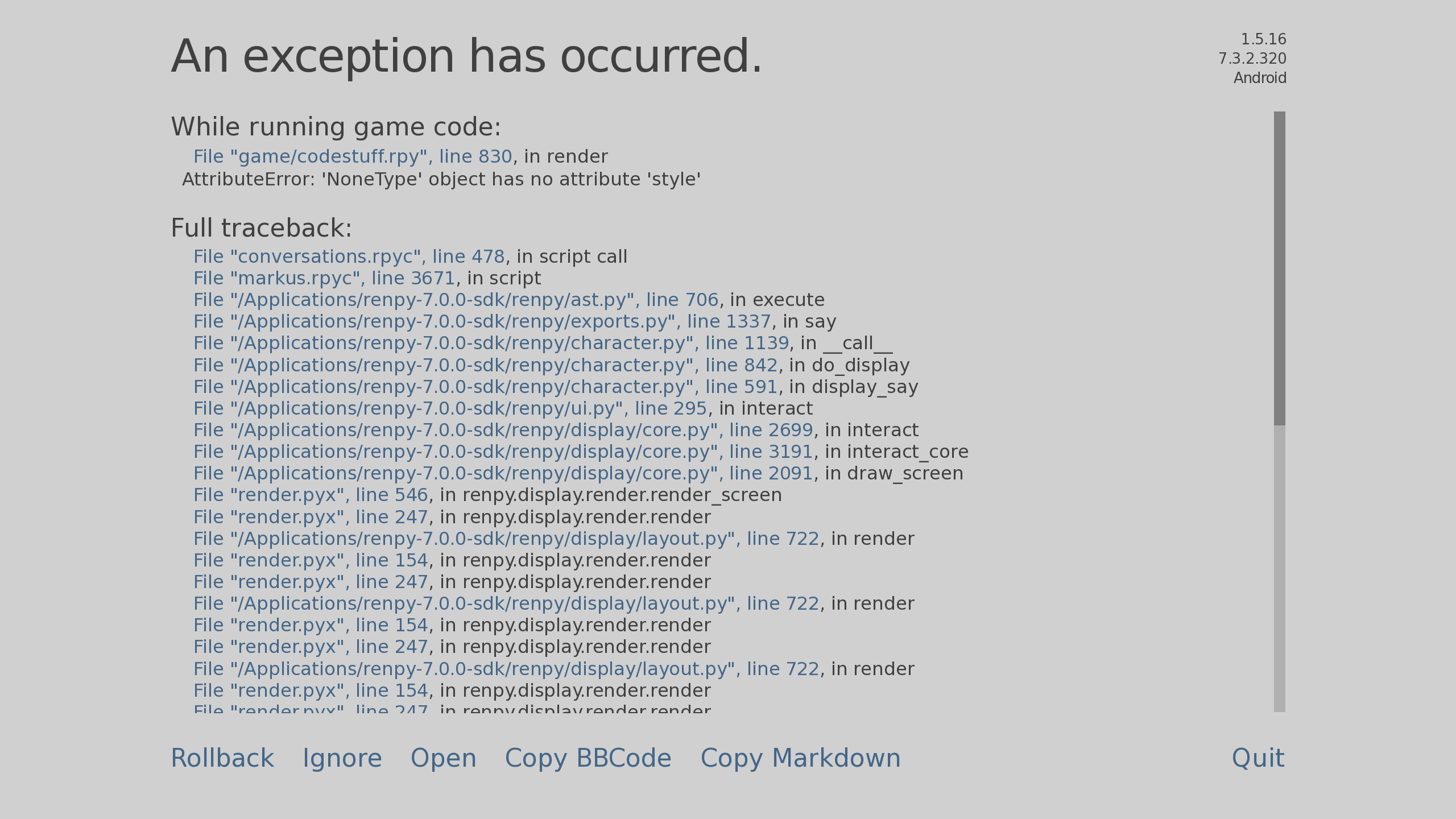 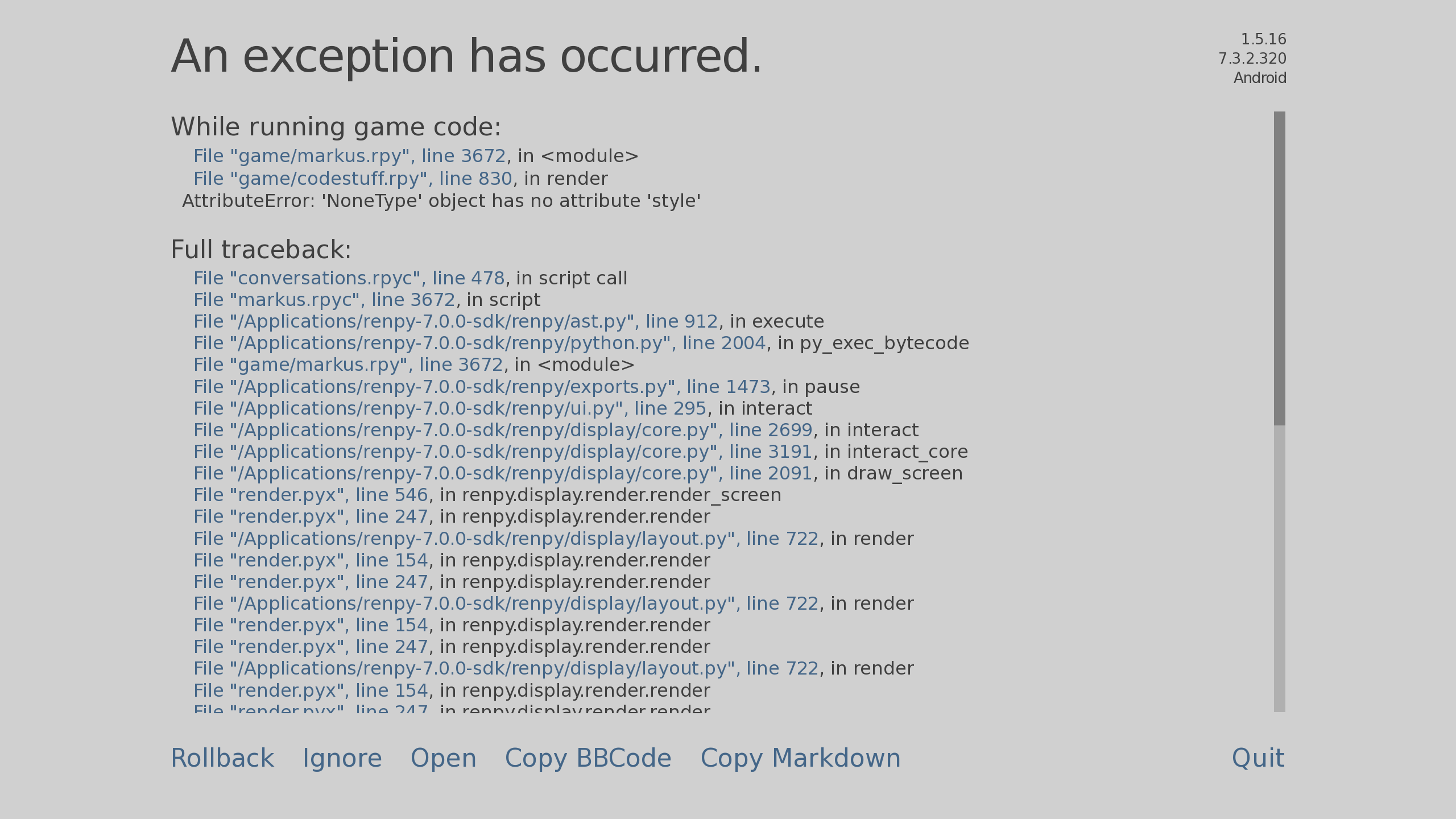 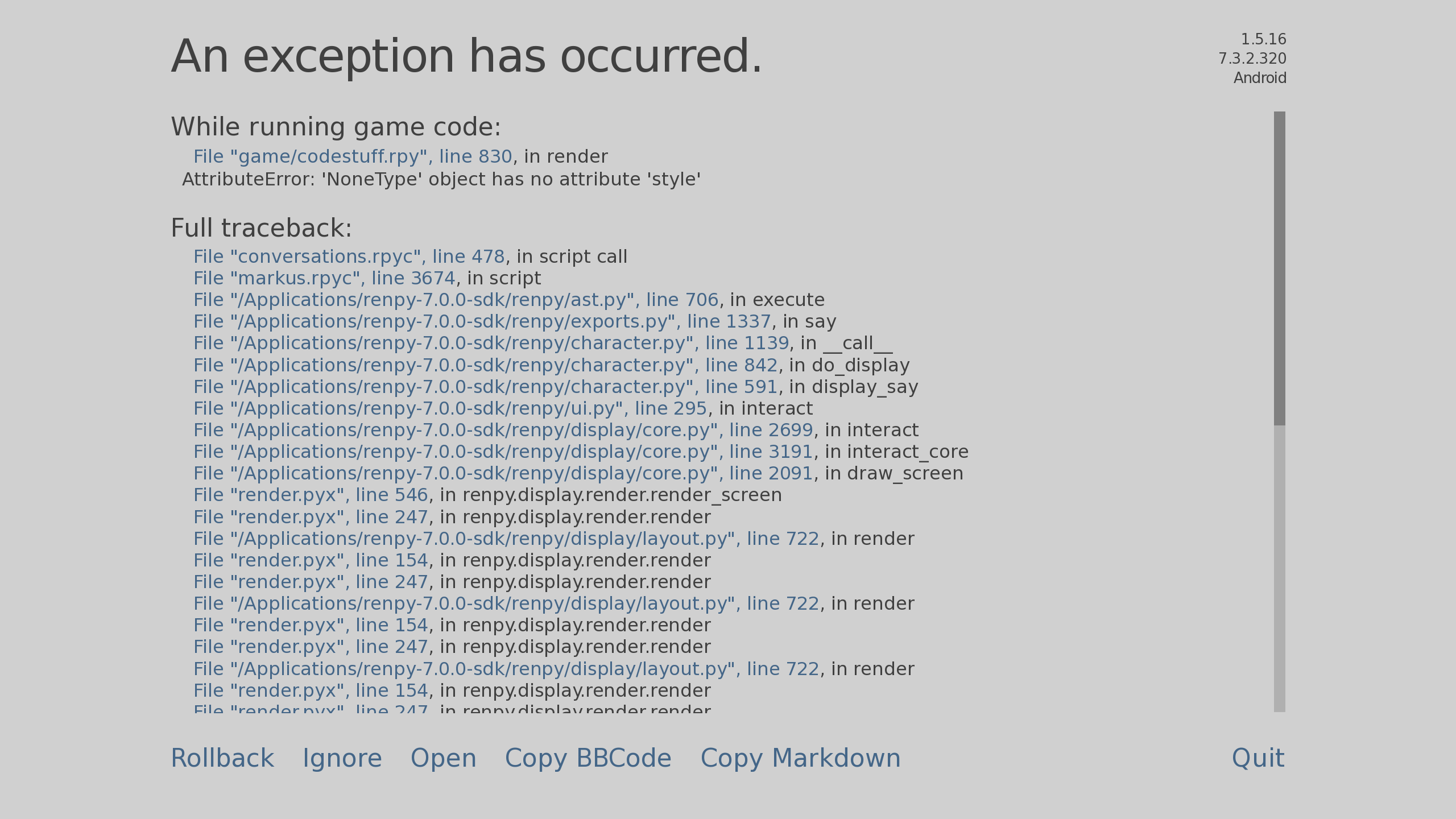 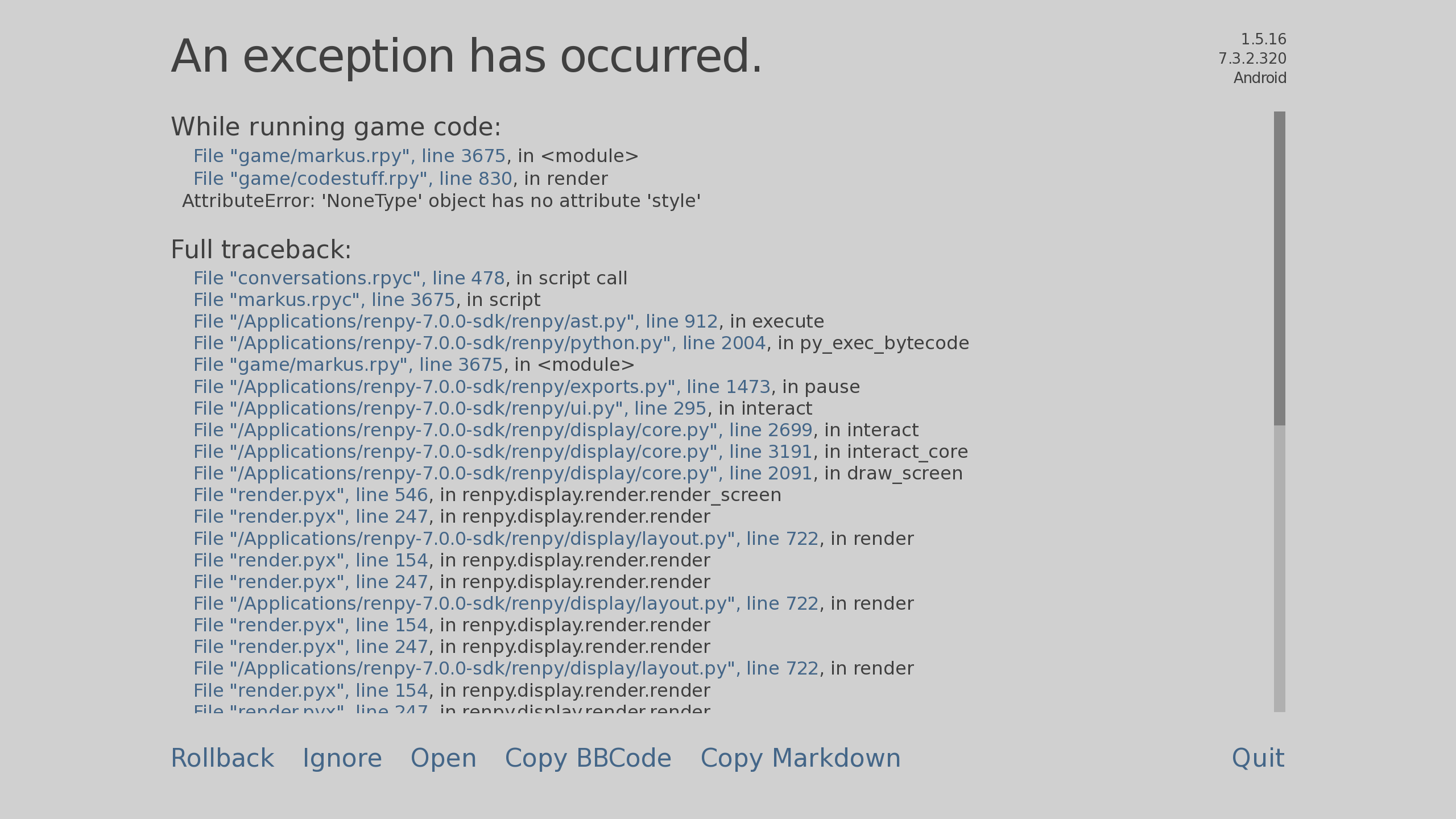 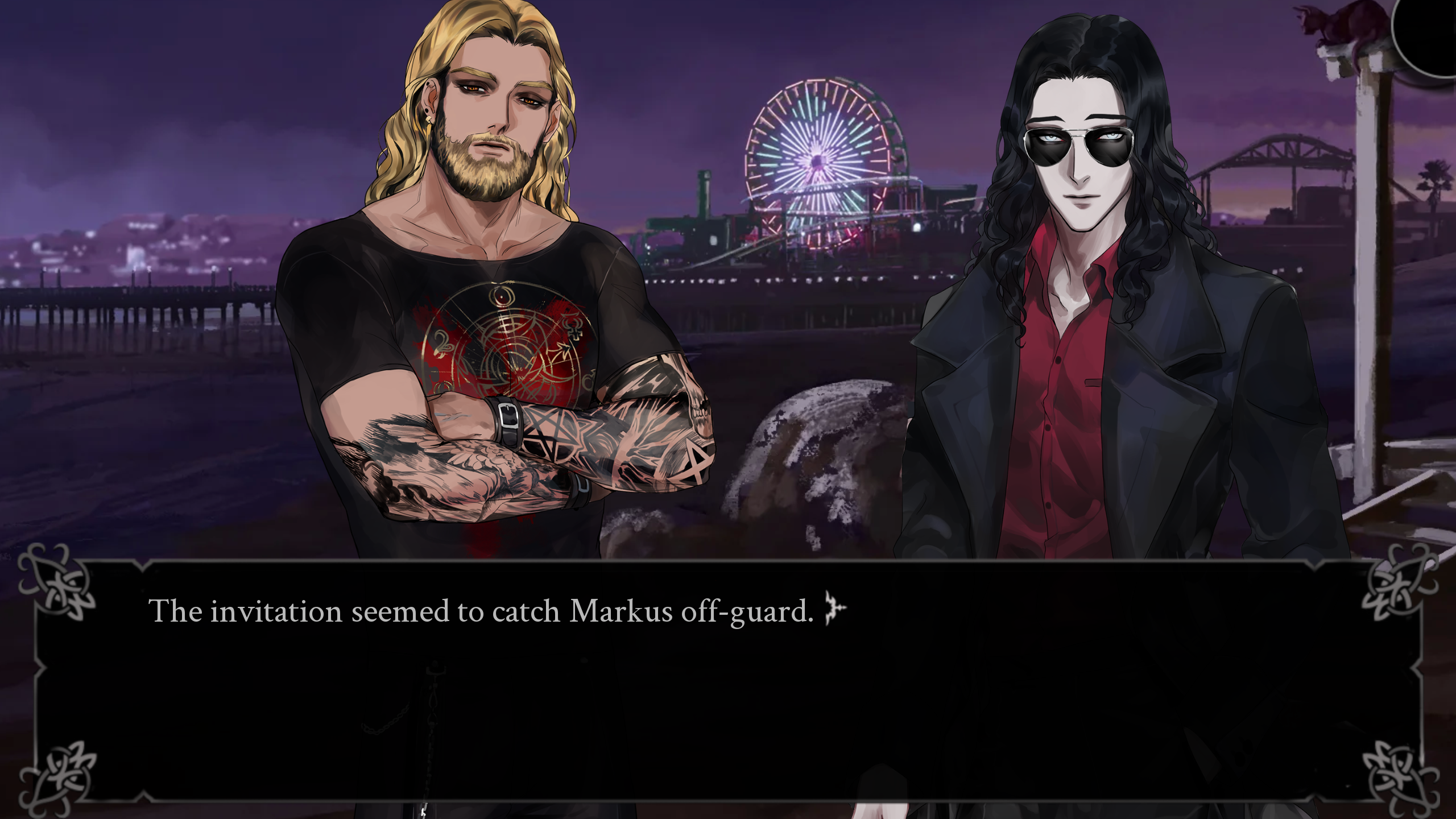 I'm on Android, it happens at Jackie's memorial party right where Randal is telling Markus to give a speech.

I'll have to play through as a Golgotha again to get any screenshots, apparently, because I passed the same scene as a Mavvar with the exact same appearance options and no errors occurred.

I got several "An exception has occurred" screens on the beach in Markus' route. I continued, ignoring them all, but have no idea what is going on since an entire portion of the conversation was skipped over... Something about Markus putting on a show as a preacher?

Just a heads-up (in case no one mentioned it), on Android, the entire scene in Koshiro's old home gives errors because the background can't load.

My heart melted with how John was when Jayce was crying. He's my favorite. <3

I have a love-hate feeling towards Rask's new appearance. I liked how thin he was before, but I'm sure I'll get used to it. I hope you keep his goofiness with the rework though. He's my second favorite lol.

Okay. No biggie. It's not game breaking or anything.

Fair enough. I just try not to play graphic nsfw games on my computer. I'm an adult, but I do live with my parents (who know what I play but would rather not see it) . That can get awkward as you can imagine.

If you're interested in fixing the Android build (no pressure since it's an afterthought), there are emulators for both PC and Mac. https://www.androidauthority.com/best-android-emulators-for-pc-655308/

I wish I made steady money so I could help get that Chris stretch goal on patreon, but all I can do right now is praise your work and stare longingly at the lovable, overly excited pup.

I do enjoy this game a lot, Koshiro is my favorite.

My only issues are that in the Android build the words in the intro run together, and when playing the game the words run off the dialogue box.

I took screenshots if needed, but I don't wanna bog down your comment section with pictures if I can help it.

I second the furry mod comment, but the game is good as-is too.

However, there were a handful of errors after I had Gio take care of himself in his room after walking in on the other two in the throes of passion. This is on Android, I'm unsure about the others.

Definitely an interesting concept. I've seen two endings, but I'm gonna try for the others.

Hehe, I'll be sure to do that!