I meant to start this devlog days ago, but better late than never! My time for gamedev has been cut in half for this jam but I'm not detered!

Myself and J.Omar have been working on a little platformer about bees!

Basic collisions and movement all went off basically without a hitch! Even solved my half-pixel collision problem that I also had in another project. Everything was great until it came time to deal with the health mechanic. I'd never dealt with any sort of melee attacks before so had to take some time and do some learning. I'm happy to say that so far as I can tell, player attacks, damage and enemies are all working!

NPCs were next and without issues!

The boss battle has definitely been the biggest challenge of this project so far! It's still very much a WIP, but the boss attacks & takes damage now! The timing between different states needs to be tweaked for sure & nothing happens yet when he dies. I'm also getting a glitch where the boss stops creating it's hitboxes if you restart the game a few times.

Unforunately I've been on the road for the past 4 days (and again for the next few) so I've lost a lot of time on this. There's 100+ things we've been thinking would be awesome to add to this so we'll see what we can manage! Hoping to make this game the best it can bee!

Here's a little mockup of what's to come! (by J.Omar) 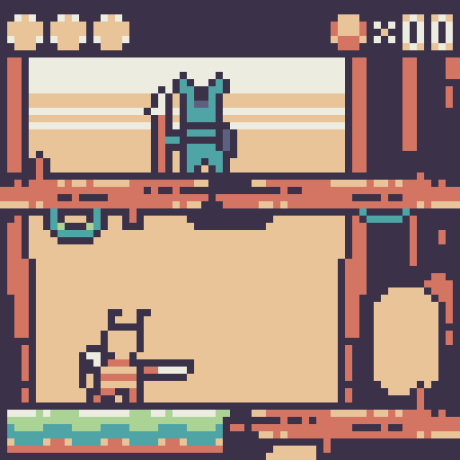 I'm also getting a glitch where the boss stops creating it's hitboxes if you restart the game a few times.

Impossible to say for sure, but this suggests to me that either the boss itself is not being destroyed and reinstantiated or something to do with the hitboxes is being stored in a place that isn't being cleared out before each fight. Generally, I'd expect this to be the result of stale state.

Good luck, keep it up!

The weirdest thing is that it only seems to happen on the 3rd game restart (not second or 4th 5th etc. But it never happens on a room restart or so far as I can tell yet, any other time!

Thanks for your insight! :D

Didn't have a ton of time today but managed to squeeze in a few minor things! Added in some new sprites, got the UI more or less sorted, health is replenishable, and a few sound effects are in!

I didn't realize the spider sprites were in reverse, so apologies cause' they're totally running backwards!

Love your pixels so far!

thanks dude! I'm pretty jazzed about how it's looking so far! Our artist is great at the tiny sprite work!

Getting down to the wire now but we're getting close! Set up parallax this morning and fixed a couple minor things! Other than the boss room we've only just started on level design! Think it's going to be pretty last minute before it's ready but I'm still feeling pretty confident we can get it done!

Since I'm working tomorrow during the deadline, today's gonna basically be it for getting this game finished!

As optimistic as I am, I'm definitely starting to feel the pressure! The list of things to do seems to be getting longer not shorter, but the end is definitely in sight! Still some minor things to program in and we've only skimmed the surface of level design!

Another 5 hours or so and I'll finally be back to work on this! Praying we get it done in time!