Publicly available for testing and feedback. · By

I have played the PAUSED pre-alpha demo and to be honest I couldn't fault it, the game even had descent sky in it which great. The sun had great visual effects. Graphically, It appeared to be very polished (to me) and I really liked the rocky environment. Control wise, I found it just a tad too responsive with my xbox controller but neither did I look to see if the sensitivity could be adjusted rather I just got on with playing. Towards the last quarter of the game I became much better with the controller but there and then again I don't use the xbox controller that much as I am a keyboard and mouse man lol.

I know the game is pre-alpha but I was shocked when it ended becuase I wanted to play it for a while longer but I think it's looking great and I can't wait to see how the game develops. Are you going to have different themes? Gardens/Sci fi/Frozen landscape or maybe even an underwater adventure. Extra weapons? I can't wait

And here's the video I did tonight (with a headache), I looked at the thumbnail for the pre-alpha and knew I had to give it a play.

regards and all the best

Sorry, I started a new topic by accident so feel free to move the post.

No worries that's why it is a forum rather than a comment section :)

I know the game is pre-alpha but I was shocked when it ended becuase I wanted to play it for a while longer but I think it's looking great and I can't wait to see how the game develops. Are you going to have different themes? Gardens/Sci fi/Frozen landscape or maybe even an underwater adventure. Extra weapons? I can't wait

We want to extend the current map of the pre-alpha further down the development line when the two missing major features are complete.

Yeah the pre-alpha is ~30 minutes long if you don't know anything (that's why the signs are there to help people understand - only a pre-alpha solution), but only takes ~5-7 minutes for people who already know everything. The Pre-Alpha is just like a demo for us to show the game to people and get more feedback on it (esp. from gaming community). We got plenty of feedback from fellow developers / game-industry people, when we presented it. But wanted to know how people we don't know react to it :). Plus, the "Time Shimmer" is quite hard to show off with pictures - so making it playable was just a choice we made.

There won't be actual "levels" - more like one interconnected canyon - so additional themes come only as part of the canyon / left-behind otter civilization stuff.

But the canyon you have just explored is supposed to be flooded by water which is currently hold back by pumps. Thus allowing you to swim through the level and explore it freely with a different tone to it :) So to test if the tech works for that - we will make the pre-alpha canyon also floodable. (it will most likely be the new end of the pre-alpha, spoilers)

The second major feature is the combat system. Currently the input is unbound for your weapon as we are just starting out doing our own animations - including attack animations. Most of them are placeholders or retargets of ue4's third-person animations.

Everything can change of course during the events of development. If we figure it ain't fun / good enough - we need to change some things :) 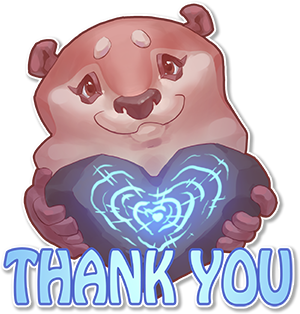 A huge thank you from the art department, too! That's an awesome video! :D

Well, I look forward to new updates and I really do wish you guys all the best for the future. Cracking product so far.