Wow, so excited! Adorable characters, adorable art style, and even an adorable logo

So, I never play horror games. I can watch horror movies just fine (in fact, they make me laugh), but horror games put me in the position of the character, and that's a great cause of anxiety. Despite all this, I ultimately decided to try Therapy with Dr Albert Krueger. Something about the art style and minigames shown on the download page drew me in. In the end, I fell in love. Especially after the good ending. The new dialogue, the entertaining video (I'm sure you know the one I'm talking about), and the character interaction all made this game very charming. It's something that will stay in my mind, and in a good way.

Also, to show just how bad I am with horror games, my family once tried to get me to play Rush of Blood. I ended up screaming at the top of my lungs and quitting the game at the loading screen. The game hadn't even started. It was just loading the main menu.

I learned a lot about Flint last year from a Michael Moore documentary called Fahrenheit 11/9. It really changed my view of Obama.

Got all the endings! BOY was my favourite. I felt bad about getting the DENIAL ending though lol.

Definitely not lucky. It was an awful experience. But as for people liking you... Most people don't act on their crushes, so if they liked you, you probably just wouldn't know. I'm sure there's been someone who quietly admired you from afar.

Very well done. I've been stalked before, but it was by someone who had a crush on me, so this felt different.

I'd love to apply for an artist position, but I only do realism now. I doubt I'd be able to mimic the game's art style. I'll try reaching out to my friends to see if they'd be interested. We all went to an art school together so they're most likely qualified; however, I don't know if they're available to work at the moment. Either way, I hope you're able to find someone suitable!

I made Shrek the guards in mine

Whoa, they guessed it right! I'm a cancer. And I actually don't really believe in the Western zodiac that much, but my boyfriend likes to send me posts about it.

I loved playing the demo so much! To be honest, this is basically my dream game (not an exaggeration). I want to back it so badly, but I'm currently an unemployed part-time student with no money (I had some cash saved up, but it was stolen). If I manage to get a job while this is still in development, I'll definitely give what I can; however, for now, all I can give is this comment. Sorry! Hopefully things work out and I can give this game much more in the future!

I only have the first ending left to get

I got the secret endings. This game was pretty weird for me. I understand the point it's trying to get across, but I didn't recognise a lot of the things I was spending money on since I'm not American. The border wall, electoral college, flint water crisis, etc. I don't even know who Jeff Bezos is.

Here's mine. She doesn't have any backstory. I just did what I thought looked nice. 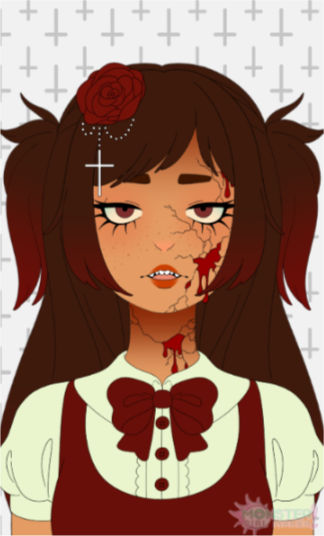 I just walked up to the pins and knocked them all down before bowling so I got 5 strikes.

I wish the demo was longer! Also, it's pretty cool that my last name is Ramirez. Anyway, I can't wait for the full game.

Woah! I didn't expect the plot to be like this! I really like Caesar. He's so thoughtful and considerate. Also, [spoiler?] I somehow got jumpscared when I saw the top of Alto's head in the window. Speaking of, I like his character too. Especially in Caesars good end when he said what street to take. He's very caring.

By the way, I thought I got all four endings, but only two pictures show up in the gallery. I guess I need to play some more. Anyway, this game was great. Definitely worth my excitement!

EDIT: After posting my comment, I saw you added an ending guide. So now, 27 minutes later, I've gotten all of the endings!

WOO! Can't wait! I have absolutely no guesses about anything though. I'm the kind of person who doesn't theorize anything, so I'll be completely surprised when I play the game. I don't even watch trailers (but I'll make an exception here), so that I go into things blind. Anyway, I'm so excited to play this. I've been checking itch.io everyday (which I've never done for a game before).

So, I really enjoyed the actual game, but the characters? Not so much. Haruka seems nice, and I don't know enough about Yumi to form an opinion, but the other two just came across as rude to me. I don't know if that was intentional, but they almost seemed to belittle Haruka and the MC. I'll probably still play the full game when you're done though. Day Zero was very interesting!

I'm so happy I got to play the second half! It had been so long since I played this game (I went to the first page of comments and apparently, mine was made a year ago). I actually forgot what happened/what I had done on each of my save files, so I just decided to restart the first half as well.

I related even more this time playing. I'm in my senior year of high school now (I know, I'm young), and I'm expected to know what I plan to pursue as a career. I was thinking of doing independent illustration but I'm not sure I have what it takes. Most days, I don't even have the motivation to create anything. And it doesn't help that I'm in an art school surrounded by people who have way more technical skill than me. I'm supposed to submit college applications in a month or two and I can't help but wonder if the debt is worth it.

Well, just know that I really enjoyed this game. It really resonated with me. Also, I think I noticed a reference to Defaction while working in the bookstore?

I'd love to see Aldrich and Leslie

I don't have much to say since everything I thought of has already been said.

1. What did you think overall?

I really enjoyed it.

2. Which character are you most excited about romancing?

Rafael is my favourite so far.

3. Did you find any bugs/typos?

4. What would you like to see most in the full game?

Uncovering more of the story and learning more about the characters.

5. Other comments or suggestions?

One problem I had with the game was the font used. I found it difficult to read because the letter "d" looked like an "o" with an accent over it to me. It took me much longer to read everything because I kept misreading words. Another thing that slightly bugged me was how confusing all the options were. It was hard to know what I was selecting when there was only an image. Maybe there could be some text by the options to make it easier to understand? For example, when Ash teases Braums about forgetting their name, the text for that option could say "snarky" or something like that. Or if you don't want to have text, maybe use images that are easier to understand.

Edit: I saw your comment about having a tutorial to show the different meanings of the symbols and I think that would help greatly.

I love the art style as well as the music! The feeling of wanting to accomplish something while being unmotivated was all too real.  And I also want to become an artist but question if I'm cut out for it. Even the way that the protagonist worded it made me relate. The only two things that I didn't relate to was the protagonist's love for pizza and anime, and that they are an only child. Anyways, I love the game and can't wait for the second part.

Ps. That Fire Emblem poster in the bedroom was a pleasant surprise.