Such a silly but interesting take on Minesweeper. The classic mode is really challenging!

Cool! Also, level 35 was quite the challenge. The enemy going on the offensive definitely changes the way I think

Stuff I think it could benefit from:

- "Next" button when you finish a stage, alongside the replay/exit buttons.

- Maybe have the enemy make its move when you lose, so you know more easily why you lost

- Some sort of animation for the checkmate would be cool

Will try to play a bit more later and see if I have any other suggestions, but it looks good!

This was a fun prototype! It definitely didn't play nice with my DS5 gamepad (L2 behaved as all non-movement buttons).

Pretty solid platforming, looked great, loved the music. The combat against regular enemies felt a little "Not worth the trouble", but I enjoyed the boss fight!

Extra respect for having the volume set to <100% by default.

This is a fun idea. The unlocking and re-locking is a neat concept!

I really like that there's an options screen with volume settings/fullscreen settings. Seems uncommon in game jams

Sometimes I am planted on the ground, but still can't jump (Usually with the left side/Spacebar)

I really enjoy this! Feeling some `Captain Forever` vibes from it.

I love how quickly the difficulty scales up, and the gameplay evolves (While also still giving you time to collect powerups between waves). The game performs well, too.

I think it could be improved by a bit of music.

I feel like the suction gun is a neat concept, but could be elaborated on by doing more than just plopping people into pits (eg: Shooting an enemy at another could stun them, or knock them back more than just a nudge).

More of a subjective thing, but I think having the mouse control the direction of suction without being based on screen position (Like a twin-stick game) would feel a bit better.

As for issues: The text on the intro screen is overlapping and cut off, which doesn't set a great first impression. 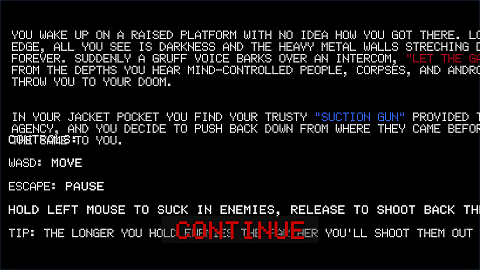 A fun idea! I think it could be improved by having the difficulty scale up, as once you 'get it', the game pretty much doesn't end until you decide to stop (23 points for me).

Also, I noticed going left at full speed for a while, asteroids sometimes pop-in right in front of you, causing an unfair death.

I dig the chill music, but it does feel a little out of place in a space shooter.

Tried this out. The pistons in stage 8 feel a bit trolly at first, but maybe that was the point. I don't love that you can get hit by the spikes as it's lifting up if you just move to the side. All in all, a pretty decent meatboy-esque thing, though!

One thing I'd suggest clearing up is that the dash works if you hold other directions. I thought it was just a forward thing for a while.

Also, I'm not quite sure how I managed this, but I kinda broke it: https://i.imgur.com/wiPFYDY.png

In the end, I think I got a pretty good time: https://i.imgur.com/is1VgK6.png