The latest version gets rid of the prompts and uses nice slidey modals instead.

Ah, interesting! I actually rewrote the save/restore interface without prompt() for Gruesome (which, despite being a parser game, uses much of the same engine), so I'll try to make that change to GS soon.

yes, pull requests are welcome! Somebody already spotted and fixed a mistake in the build log.

It's just the internal names that have to be basic letters, numbers and underscores, if that's what you mean. You can set the display names to anything you like:

I've just released Gruescript into open beta. It's an online development tool/scripting language for making puzzly text adventure/interactive fiction games. It's designed to make games that have the feel of old "parser" games like Zork, but play with a modernised, typing-free interface that works on mobile devices and suits today's players. 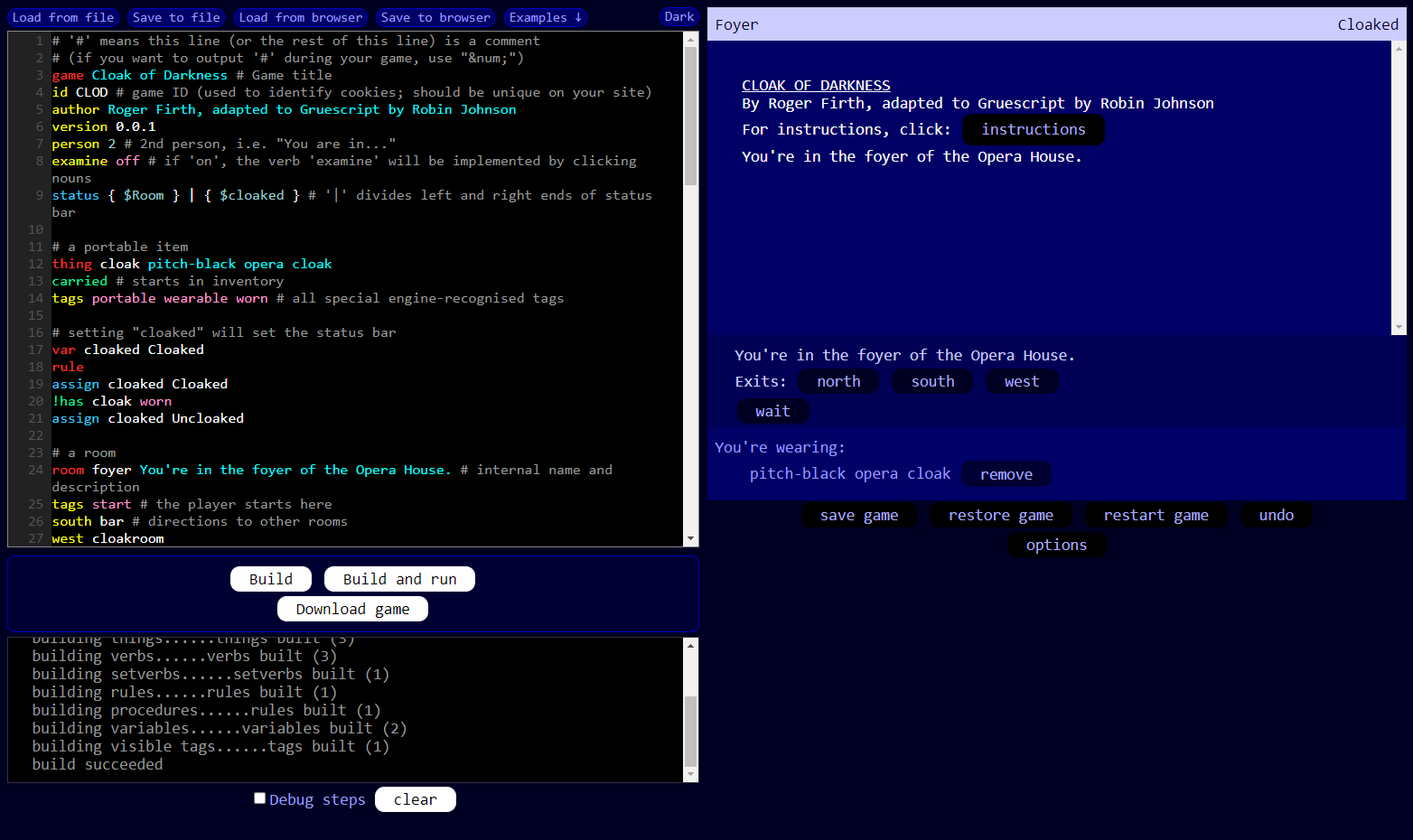 Interactive fiction (IF) is broadly divided into "parser games" and "choice games". Parser games are the ones you type instructions into. Probably the most famous ones are the old ones, like Colossal Cave and Zork. Choice games give you buttons or links to make decisions, a bit like "choose your own adventure" books (with a little more state).

In the last decade or so there's been an explosion in IF forms, and a bunch of new authoring systems like Twine, Ink, and Choicescript. These mostly target mobile and web playability, because it's the 21st century, and mostly make choice games, a natural fit for mobile interfaces. (I want to make one thing absolutely clear: that is awesome. There's a subset of parser game fan who resents the fact that choice games exist. Gruescript is neither by, nor for, those people.)

Authoring systems, game interfaces, and game design are closely linked. Choice interfaces tend to favour story-centric rather than puzzle-centric design. Puzzle design is a Hard Problem if the player has to be able to see all their options all the time. This isn't to say there aren't excellent examples of puzzly choice games; but none of those systems make it particularly easy, at least with the type of puzzles parser games are remembered for.

So, this is my attempt to create a web/mobile-friendly authoring system for parserlike games, that identifies and preserves the qualities that make the parser interface suitable for those puzzly games -- snappy prose, a tight world model, rapid back-and-forth interaction between the player and the game, with generalised verbs that don't give away your options before you think of them yourself -- while eliminating the parser itself. It had to go.

(You may have seen the front-end before; I've used it in homebrew Javascript games, including Detectiveland, which was the first non-parser game to win IFComp in 2016. Like many "first non-X"s, it couldn't have won without imitating X as closely as possible.)

Gruescript's online editor is modelled after two tools I admire for their accessibility, cuteness, and strong followings among fringe gamedevs: Bitsy and Puzzlescript. My aspiration for Gruescript is to be IF's answer to those.

I'd love to know what you think of it. It's released under the open-source MIT License. Share and Enjoy!

Bugs: there are probably many. Please report them to me at robindouglasjohnson@gmail.com, letting me know what happened, what you were doing, and what browser you're using. Thanks!

Huh, it's working in Firefox for me and none of the testers hit that problem. Is there any chance you could email me with details? robindouglasjohnson at gmail dot com

This is covered in the hints, under "The music room". Using rot13 to hide spoilers:

Reply
ParserComp 2021 community · Posted in Are there guidelines for judges?
Robin Johnson363 days ago (1 edit)

[Disclosure: I'm an entrant in the comp]
Where I've come across something like being asked to rank puzzles in a puzzle-less game, I've been rating it 3 stars as "neutral": it neither has shiningly awesome puzzles, nor is it trying to do puzzles and failing. (I'd leave the score blank if I could, but I don't think itch allows that.) Others might not see the point of a game without puzzles and rate it 1, or be refreshed at not having to do puzzles at all and rate it 5. Their choice.

Note that (as I understand it) only the "overall score" ratings count toward the final results of the competition, so you needn't worry that you're unfairly lowering a game's score.

Javascript and lots of tea :-)

Thank you! I would like to release it as an engine one day but haven't had the time or focus yet. Feel free to grab the source and play around if you like, though.

Aay, my game is now feature-complete! A week ago I really didn't think I'd get there. Now to get it torn to bits by testers :-)

Reply
ParserComp 2021 community · Posted in How to submit a game to ParserComp without making it publicly available now.
Robin Johnson1 year ago

Hmm. As far as I can tell there is no way to publish a game directly to a jam page in a way that will keep it invisible (on the jam page AND the author's itch profile) until submissions close. We could submit them as "restricted", but then they wouldn't be playable from the jam page (when judging starts) either.

So I suppose we should be allowed to release our games in, say, the last 24 hours before the deadline? Adam?

I'm struggling to get mine finished. If I don't, it'll probably go in IFComp, but it's better suited to Parsercomp. Too many distractions, and now I'm coding for my day job again there's less codey-brain left over, but I'm pushing myself when I can, and I'm still somewhat hopeful.

I heard a tip from a game designer recently that's going to stick with me: when you start work on a new game, the FIRST thing you do is make a complete playable game as quickly as possible. It won't be big or very good to begin with, but it must have a beginning and an end and a way to play through. From that point on, *you have a game*. The rest is editing, and when the deadline is looming you can reduce the scope if you need to without rushing things to tie up with the ending. And I wish I'd heard it before I'd started this project.

EDIT: Having got my mojo back over the last day or two, I'm now feeling much better about my game, have worked out how the endgame is going to play out, and am a lot more confident that I'll get it submitted :-)

My apologies for the egregious lack of polar bears in this game. I actually coded a polar bear but by some astonishing blunder I haven't included one in any of the levels. It can walk safely on ice like the penguin, but is "strong" so it can push multiple crates.

I hope you've enjoyed the game all the same, despite its outrageous dearth of arctic ursine predators. No promises, but I'd like to do a level pack update for Zookoban at some point, which would definitely address this defect.

I've finally re-added the hints - you can see them by typing HINTS. Enjoy!

I believe I have fixed this now, thank you! The game is so old it was using document.cookie rather than localStorage, and modern browsers don't seem to like the former any more.

Glad you're enjoying the game!

So far I've rebuilt Hamlet and Zeppelin Adventure as well as this one, and I'll do the others as soon as I can, probably over the next day or three. I've temporarily removed the deprecated exe's and I'll post devlogs when I upload the new ones, so you should be able to keep track.

Thanks for your help!

I've rebuilt the exe with the latest version of HTMLExecutable, which says it fixes Windows 10 security issues - try that?

I know it's your rules and all, but I'd like to say I would definitely be up for this jam (and even have an Infocom-related game in progress currently bound for IFComp that I'd probably submit here instead) - if it weren't for the requirement for games to be in I6 or ZIL. You could limit it to parser games and everything would still be in the Infocom spirit. I think the ZIL revival is a great thing but I just haven't got the time or spoons to learn a new language. I suspect there are a lot of authors in I7 and possibly Dialogue (which compiles to Z-code)  as well.

But again, your jam, your rules. I hope it goes well.

Sorry about that - looks like I need to find a better way of making executables. You could try this: http://versificator.net/portcullis/portcullis.zip - unzip it to a fresh folder and open index.html . Unfortunately Windows 10 security is blocking that for me as well, but your mileage may vary. I'm as certain as I can be that it's clean, unless something's gone very wrong at my hosting provider.

Thank you so much for your support. I'll look for a better way of making offline playables.

No, it's my own engine made with Javascript

It is. There's a particular combination of animals' abilities that you need to use.

oh man I just made a game called Zookoban too! http://versificator.itch.io/zookoban (Don't worry, it's different enough!)

Thanks, glad you're enjoying it! Y8 were using (and monetising) it without my permission, something they seem to have form on.

Y8 dot com /games/zookoban is my itchio game Zookoban harvested and monetised on their ad-funded site. As far as I can tell they're just iframing it from itch's servers, they're not hosting a copy. I've asked them to take it down but I understand itch has defenses against hotlinking, so you might want to know they're not working in this case. Thanks.

Reply
#1: Breakout but it's a Boss Fight. community · Replied to The Game Blenders in For discussion about this game!
Robin Johnson2 years ago

Ah, nice mechanic, thanks for explaining! It may be that you need to make that clearer, but I'm quite bad at spotting cues so maybe I missed something.

Lovely! Fond memories of Marble Madness, but your game was cuter and less cruel.

I found the controls sometimes unintuitive too, not least because my brain kept wanting to map right to  clockwise and left to anticlockwise. (Thanks to the devs for making it possible to change that!)

Nice! Reminded me of old arcade games like Asteroids

Reply
#1: Breakout but it's a Boss Fight. community · Posted in For discussion about this game!
Robin Johnson2 years ago

What exactly does "parry it" mean? The ball seems to get a bit faster but I'm unsure what it does.

Hmm, that's not right. What browser are you using? Do you have Javascript enabled and cookies/local storage allowed?

On mobile screens you might have to scroll down.

Thanks for spotting the bad link!

The green '1' to start playing from that level.

I've submitted Zookoban, a 2d animal-themed puzzler that I've had on the back burner since mid last year. Thanks for the impetus! 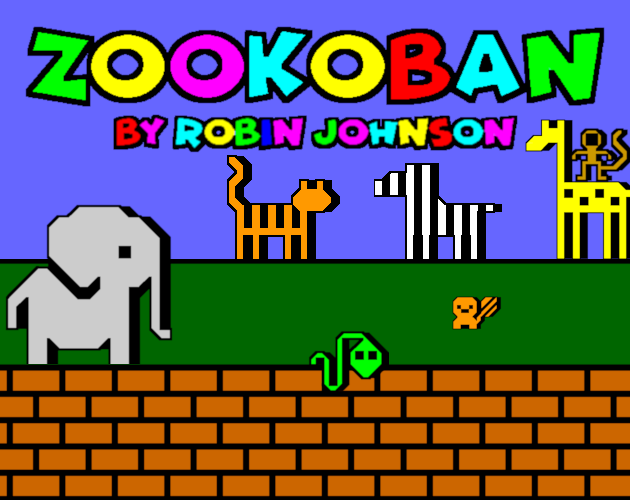