Very cool game, the mechanics are well explained and the levels flowed well. I played the old demo with the other kinds of fairies, can't wait to see what you cook up with those next time.

Have my epic gamer stats. 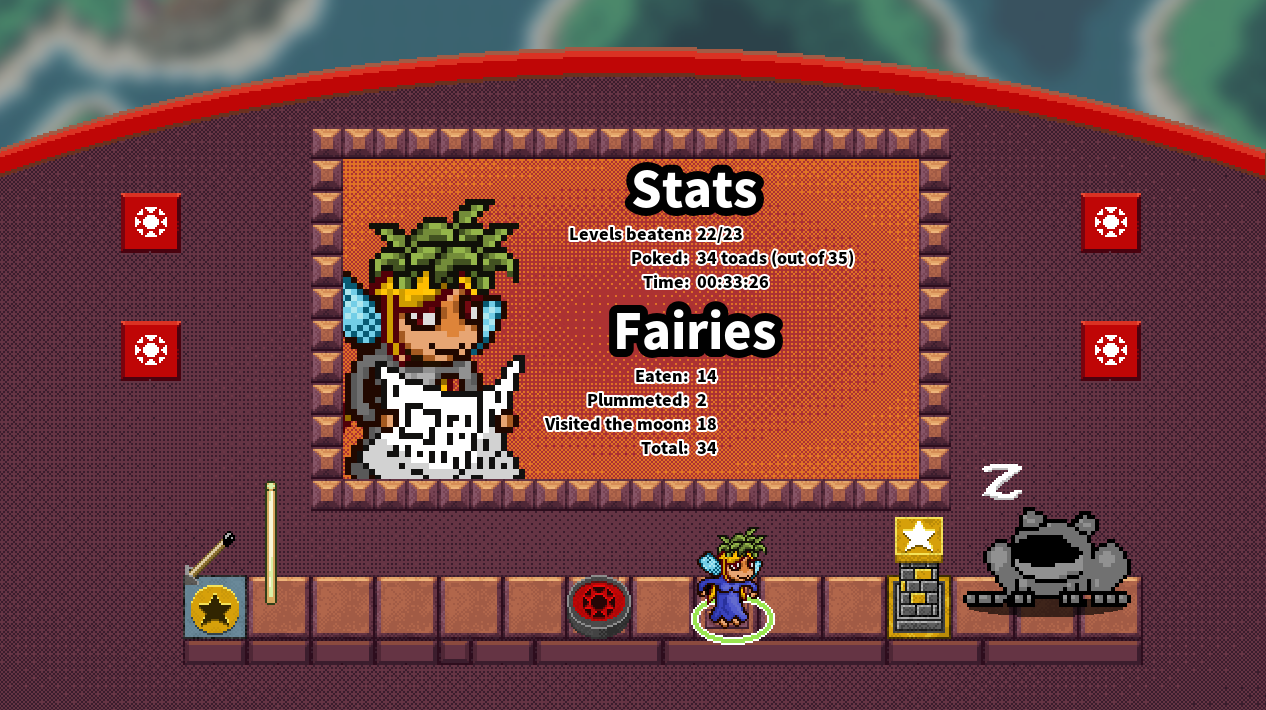 Managed to get through the tutorial, and I think you should teach players a little bit slower. You just get thrown a lot of things at and it's kind of overwhelming, I'm pretty sure I bruteforced some parts which had another intended solution too.

Spider: Maybe I shouldn't allow to be this close to the edge without turning in the first place? It looks silly anyway lol, I'll see what I'll do

Controls: Weird, I was sure the menus worked with the controller stick before but you're right, it doesn't now, but you can use the pad. I'll fix that.

Camera: That's definitely something I have to think about, the camera is good for platforming, not so for puzzling. Maybe I'll add a zoom button.

Rocks disapearing: Yeah it's kind of arbitrary for now, I'll add some visual to rocks that break.

Speech bubble confusion: I'll probably move the player character away when they talk to a NPC if they're too close

Lines in french: Whoops, I switched up a few lines in the locales.

Spiky walls are also a glitch, you're not supposed to be able to climb them, not sure what happened. Small rocks not pressing square buttons is intended as they're supposed to not be heavy enough. You can jump to drop a crate on top of another but yeah it's not ideal.

Thanks for the feedback, gotta squash those bugs

Looks like I'm not off the hook for bug squishing duty... Or spider squishing in this case?

Thanks for playing and reporting!

Thanks for playing and congrats on getting all the eggs!

Yes I was kinda late for demoday, I made some new systems but only two levels that really uses them (buttons and gates, throwing stuff). I considered delaying until next demoday but I wanted feedback on those. Glad you like it!

Well, I'm sure you could find each of this game's mechanics in other platformers, but I think I made something pretty original as a whole in the end.

I do put a lot of thought into my characters! There are more planned obviously, but they didn't make it for this demo.

The controls were actually pretty bad in the last demo, but PerfectHumanInterface did a really good video reviewing my game, mostly critizing the physics and controls, so I worked on it and I'm really happy with how it turned out! I'm glad you like it too!

Art is not my forte lol, but I do like animating, it's really easy with Godot.

This is a passion project, so I'll definitely continue working on it. I'm not sure how big I should make it though.

Thank you very much for the feedback and kind words!

Thanks for playing, glad it works on Linux, I put all my trust in Godot for this one lol.

Buttons that don't stay pushed have a darker base than regular buttons, I should make the difference more obvious though.

I back ported the mountain level from last demo and made some adjustements, but it still needs more apparently. I'll change it around again next time.

Much appreciated, thanks for the feedback!

Just watched it, this is very helpful! Thank you very much! You actually took the time to get all the eggs too. I took notes for the next demo.

In level 2, you can cheese the egg to the left by getting it with Chloée, and in level 3, to get the egg in the pit, you're supposed to wallslide to slow yourself down to be able to get to it. I can understand it's ankward to get through, the 3rd and 4th level were an afterthough to be honest. And what gave you trouble in the last level was indeed the ice.

Thank you again for taking the time to fully review my demo!

Thanks for the feedback. I really need to think about the spider thing because guessing the player means "up" when he presses "right" for example is bad if you guess wrong.

Pretty fun game, but it took me a while to get the hang of the controls, it could be explained better. Maybe you start the game in a dream and it's the tutorial? Especially how to open doors, I kept trying to push or pull the door when you actually had to move the mouse left or right.

Also it's pretty hard to throw the candy into the visitors' bag, and they keep pulling their bag away when you miss and try to pick up the candy back from the ground.

Pretty good for something made in a week, I like the art and music.

- As others said, that bunny drank too much coffee.

- Lots of leaps of faith (I don't know what I'm going to land on next), especially bad when I see a diamond in the air and think "Oh there must be a platform under that" only to die.

- The level feels very disjointed and chaotic, which doesn't help knowing what to expect next.

- No feedback when you get hurt. Also the snails' damage is random? Sometimes I get hit for 2 and sometimes for 1. Probably a bug.

- If you talk to the wolf guy at the start and leave, you can't skip his text again until you come back to him.

- You fully stop for some time when you attack while on the ground, but not in the air.

- You exported with debug mode on, that's why there's the console. Uncheck "Debug mode" when you save the exported file.

Thank you for the feeback.

You're right for the spider's controls, I'll try to add something like this so you at least don't stop when you keep the button pressed.

For walljumps, I used a few hacks to make it feel better, I'll try to adjust that. Maybe it's just a lack of feedback too, the animations for it are kinda jank and there should be a sound when you slide along a wall. Oh well, next demo!

Frequent dialog: it's because I basically compressed all the tutorials into 2 levels, but I'll try to do it more "show don't tell", and I could make story dialog let player's control alone for some part I think.

So the fact you need to get both characters to the sign isn't conveyed well (especially to speed readers or as I like to call them, heretics), I think I'll introduce players more smoothly to the "2 characters" concept next demo. This goes along the previous point.

For the eggs, you can see how many eggs you have in each level by choosing "View" in the level selector. I was planning to have that directly on the list but I kinda had to rush it to be honest. I was also planning to be able to replay a level without the cutscenes, because it's annoying to have to reread the same dialog everytime like if you want to get your missing eggs.

The last level is basically a speed challenge with both characters, if you want to know what you missed.

Thanks for playing! I'll try your game.

lol, must be the graphics. Thanks for playing!

Thanks for the feedback! I'll work on the movement. Glad you like the spider!

Thanks for the feedback! If you find the dummy slow now I'm glad you didn't play the first version...

Thank you, glad you liked the changes!

Sorry about the bee part, when you have your mind on a game for too long you sometimes don't see obvious flaws and worst, you get used to them! I can clear the bee part easily! But I see now it's not fun and the walljumping isn't intuitive.

However, you should never have to do the bee part twice, once you press the button you're done, so I don't understand what happened to you there. You simply have to progress on the spider side!

Thank you for your post! I'll try to improve the art somewhat or find someone to help me.

I'm already working on the movement after all the feedback, I think you'll find it much better next update!

I've got lot of ideas, but I want to have a good base first. The music is Fretless by Kevin MacLeod!

Thank you for the feedback, I will definitely look into the dummy's physics.

Thanks for playing and for the feedback! I'll try making the spider's controls clearer.

Weird. Could you try pressing F12 to open your browser's console and tell me if there's any error message?

Edit: made a small update with an exe version, maybe you could try that instead

Thank you for the wall of text!

-Framerate: Might be due to being Html5? Browser performances aren't the best. I'll look into it though. Maybe I'll add an exe if Godot and itch.io let me.

-Sorry for the controls! I'll try to add control mapping and make the default better.

-I'll rework the dummy's physics as a whole, he is kinda sluggish right now.

-Throw is just a joke for now but I'll definitely add an ability like that.

-Yes join up is planned, but the demo wasn't long enough to warrant it. I'll try your game to see how you did it.

-Ahah yeah that sucks, will definitely do something about that.

-Bees: I got too used to the walljump and can get through it easily, but I now see this is a problem, you're not the first to have trouble.

-Sonic spider: Kinda on the fence about it, might get confusing if you change orientation quickly, potentially going the wrong direction after an unexpected turn around.

-Congrats on beating the bees!

-Yeah I kinda threw the spike section together at the last moment to be honest, will be redone. I'm not sure specifically what spike you're talking about though.

-Crouch jumping is the best

Thank you for playing and for writing so much about my game!

Thank you for the feedback! I'll try to make that dummy a little more reactive. As for walljumps not working, this is weird, I'll look into it.