bless you for making this... this is better than the DS version

Very cute! I love how it feels like a little playable diorama.

Nice work! I really like the movement mechanic, it's a simple concept but it makes the gameplay feel really unique. Played all the way through.

Very cute, unique concept! Reminds me just a little bit of Spin Doctor / Clockwerx. I thought the puzzley aspect of turning the bolt the right amount of times was the most compelling part.

couldn't help but notice that the graphics are good

Nice! I love how the isometric terrain mushes up and down. Fun game, makes me wanna go back to it and see if I can get farther

Nice! I beat it! I really digged the pseudo-3D terrain

Hell yeah! Looks like you beat my score. Nice job!

If you're up for the challenge, you can try Classic Mode, Retro Mode, or Savage Mode... as far as I know nobody but me has beaten Retro or Savage.  >:)

This is such a fun little concept, and it's really polished! The whole interface is really tactile and satisfyingly "juicy," the keyboard clacks were a really nice touch.

I especially would have loved this as a kid, when I was learning how to code. Would be great for anyone who's willing to learn a bit of basic coding, but with some online low-score charts (smallest program size and least instructions) it could be really fun for expert coders too :)

This is almost like a teeny, tiny, very cute little minimalist Sea of Thieves. I liked it a lot

You'd be surprised how many developers would rather not worry about "making money" and wish they could just create without having to worry about financial logistics. I've played a bunch of Sokpop's games, and I'd guess they fall into this category.

Sokpop generally does very shortform games that can be rough around the edges. Sometimes it's hit-or-miss... but because of how prolific they are, they can do a lot of exploration into unique gameplay and art styles. Sometimes, like with The Hour of The Rat, they hit gold. I personally love games like that, and I don't necessarily expect them to always have features like pausing and saving, which could have taken more time to implement. However if you do want to try a more polished Sokpop game I'd recommend Popo's Tower or Helionaut.

As for exiting, it's usually not difficult to add, but it's easy for developers to forget some people don't just hit Alt+F4 when they want to close an app.

This is a very cute little game! I really love the graphics, especially the whole "contour map" water effect looks super cool. The mechanics are actually pretty well designed, too. It seems like it'd be tough to master, though "mastering" it isn't really necessary to beat the CPUs. I was craving online multiplayer, but I totally get how that's outside the scope of a $3 game.

we encountered what I think may be a bug. the metal sheets only seemed to want to attach to one point at a time, so we couldn't complete the shed. they would only attach to one log or another, not both, despite them all having ropes. also it seemed like, with all our struggling, two logs got "melded" together and not even the shears could break them apart (near right corner in the image with the ropes missing) 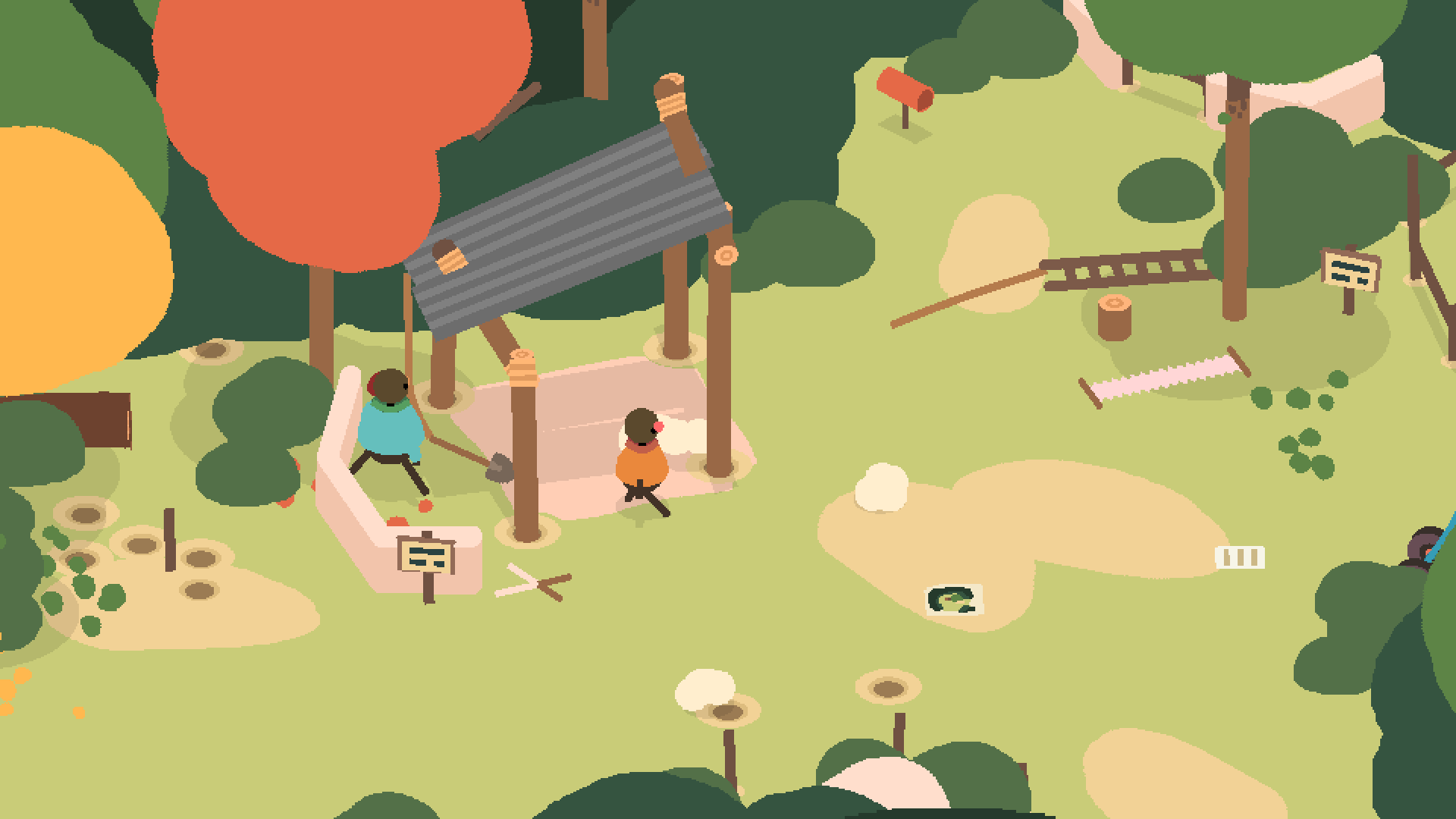 that was challenging! i liked it!

I also experienced the jump bug. It looks like the player is jumping a very tiny amount when I press Z, but only high enough to get me into one out of the three fruits.

Is it possible you're putting gameplay logic in Update() instead of FixedUpdate()? You have to detect keypresses in Update(), but after that it's better to update actual game logic in FixedUpdate; that way it'll run the same on different machines, regardless of framerate.

Hey I know this is late but I just started playing and got pretty good fullscreen by going to Taskbar Settings and turning on "Automatically hide the taskbar," then maximizing the application. 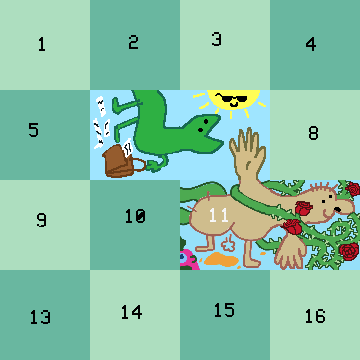 this is gettin real interesting already 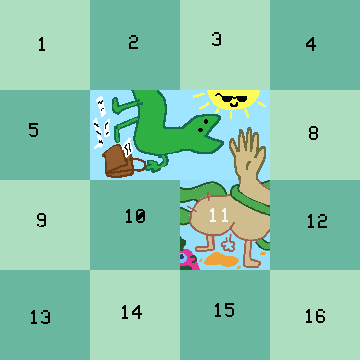 feel free to pick another square if you feel inspired!

If you like, you are also welcome to come play the drawing game I started over in the #Snake2 itch.io board (owning #Snake2 is not required!)

#Snake2 DX: Reawakening is an explosive, balls-to-the-wall bullet hell so insane it made headlines back when its GGJ prototype came out in 2012! Careening through the city at high speed, you will need to grow Snake and maneuver his tail-hand into grabbing machine guns and punching helicopters. See the itch.io page for more info!

this is my favorite forum game. the goal is simple: work together to draw a picture. i'll start it off: 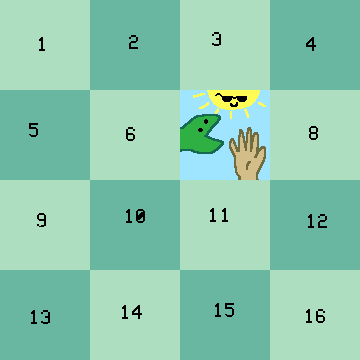 1.) before you start drawing a tile, post "claiming 6" for example, so nobody else draws it too

2.) try to make the edges of your tile seamless with what's been drawn already

3.) you can draw multiple tiles, but you should only claim one at a time. plus it's more fun if you don't claim tiles adjacent to ones you drew.

if the game picks up, i'll do my best to administer it by posting merged images and claimed tiles. have fun!

sorry i meant to say that rule #1 is "bring on the posts." please bear this in mind when visiting. thanks

aw bummer, well all i can do is hope they see mine and make an exception since i have a good ass excuse

a bit disappointed, was really excited about trying to be a part of this, but i’m at least really glad it did as well as it did

i’m seconding the motion for a second bundle or a deadline extension. i was dying to contribute but for a while i was too busy archiving police brutality videos... :(

wow i didn't know #Snake2 was on wikipedia

bring on the posts baby!!

After a long time sitting on my hard drive, I just released this with the hopes of putting it in the bundle:

EDIT: nevermind, guess I missed the window for paid projects. Oh well... feel free to add it if you change your mind. It would be much appreciated. The reason I missed the window is because I was working on a Chrome plugin to archive police brutality videos

yeah, unfortunately difficulty ramping with player upgrades is not an easy design problem!  i think you could tune it by placing yourself in later levels with lots of upgrades and playtesting it... if there were a lot more enemies and bullets, the spheres=health mechanic would have felt a lot more meaningful

very stylish, and the core concept is fun.  i liked all the character designs and bosses.  the art is ace.

for my taste, the game was too easy even on hard mode, and it seems to just get easier since the game doesn't ramp quickly enough to keep up with the player's upgrades.  it's certainly a tough thing to balance.  i love playing bullet hells like Ikaruga so not sure if i'm in the target demographic or not.  i might be the only one complaining about easy difficulty so don't change it for my sake :)

this is really, really good.  i'm impressed at how focused this is... it's a concise short form game that's super fun the entire time you're playing it.   i've been suffering the worst burnout of my career in the games industry, wondering if games are ruined for me, but i think this was some of the "medicine" i need to remember why i love them.  it's inspired me to look forward to making more short form games myself.

i assassinated the emperor but i still want to keep playing... using the shadow ninja scroll felt almost like cheating.  maybe i'll just have to set more ambitious goals for myself (get every key in one run, kill the emperor with someone besides Messao, etc).  it could benefit from having little achievements at the end, or even an online speed-run chart, but i'd hate to add feature creep to something that's so concise already.

Those GIFs are looking great!  I'm getting a "Hocus Pocus" vibe from them in a good way, don't know if you ever played that old DOS game.

Personally, I'd optimize the game for whatever control scheme you feel best suits it.  It doesn't make sense to sacrifice fun just because PCs can have multiple control schemes --- there are plenty of games out there that say "controller recommended" or "mouse/keyboard recommended."