Suddenfell has an inventory system baked in. It will allow you to manage cards that you collect.

Opening your inventory and the Library tab

Opening your inventory is as easy as pressing the "Tab" key on your keyboard. As soon as it's opened, you will be greeted by the Library tab.

The Library tab is where the bulk collection of your cards exist. From here you can put cards in your Deck (for combat), recycle (destroy) cards, or just read up on the general information of a card.

Your Library is limited to a maximum size of 25 cards, but can go over this limit if you win Combat wagers! 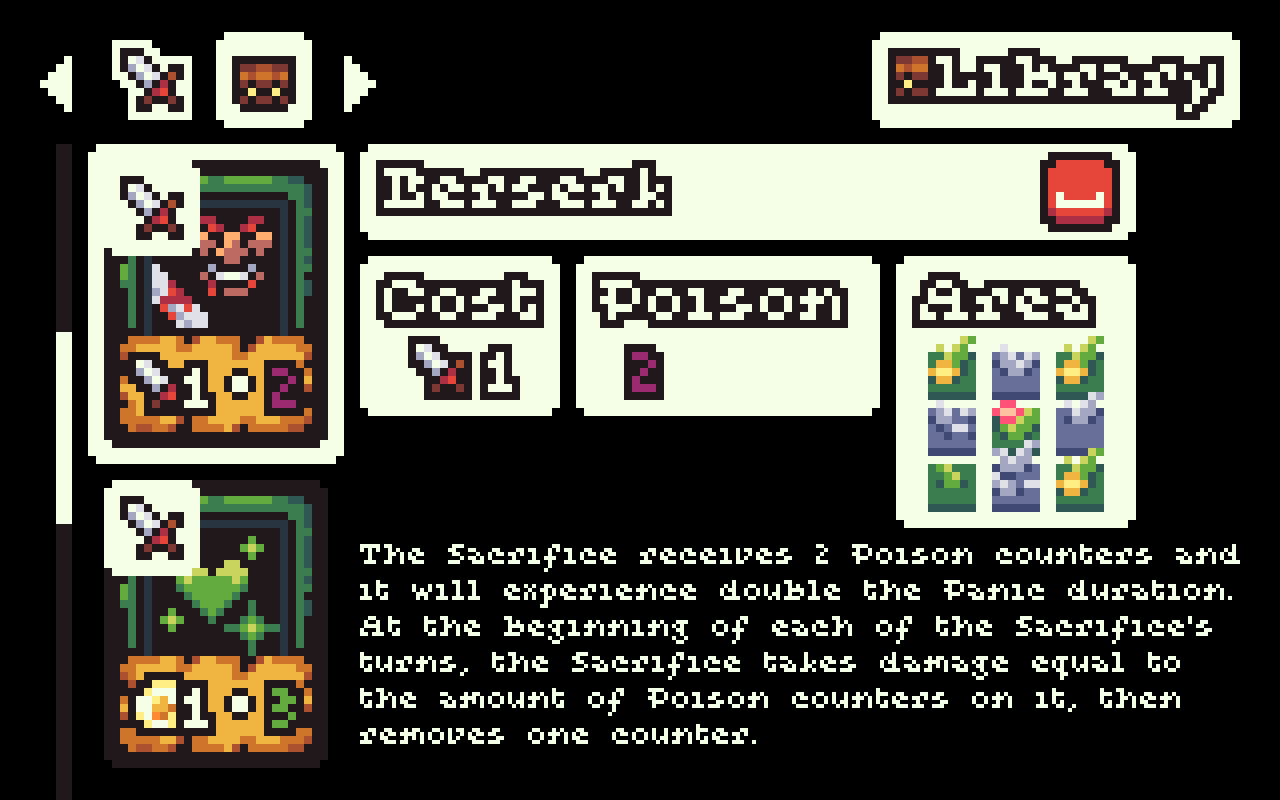 The Library tab shows you information on the cards you own.

In the Deck tab you'll see the cards you will be going into battle with.  You will be given general information over your deck. Always make sure that the Spells you have in your deck, have the corresponding items available as well otherwise you won't be able to "power" the spells in Combat. 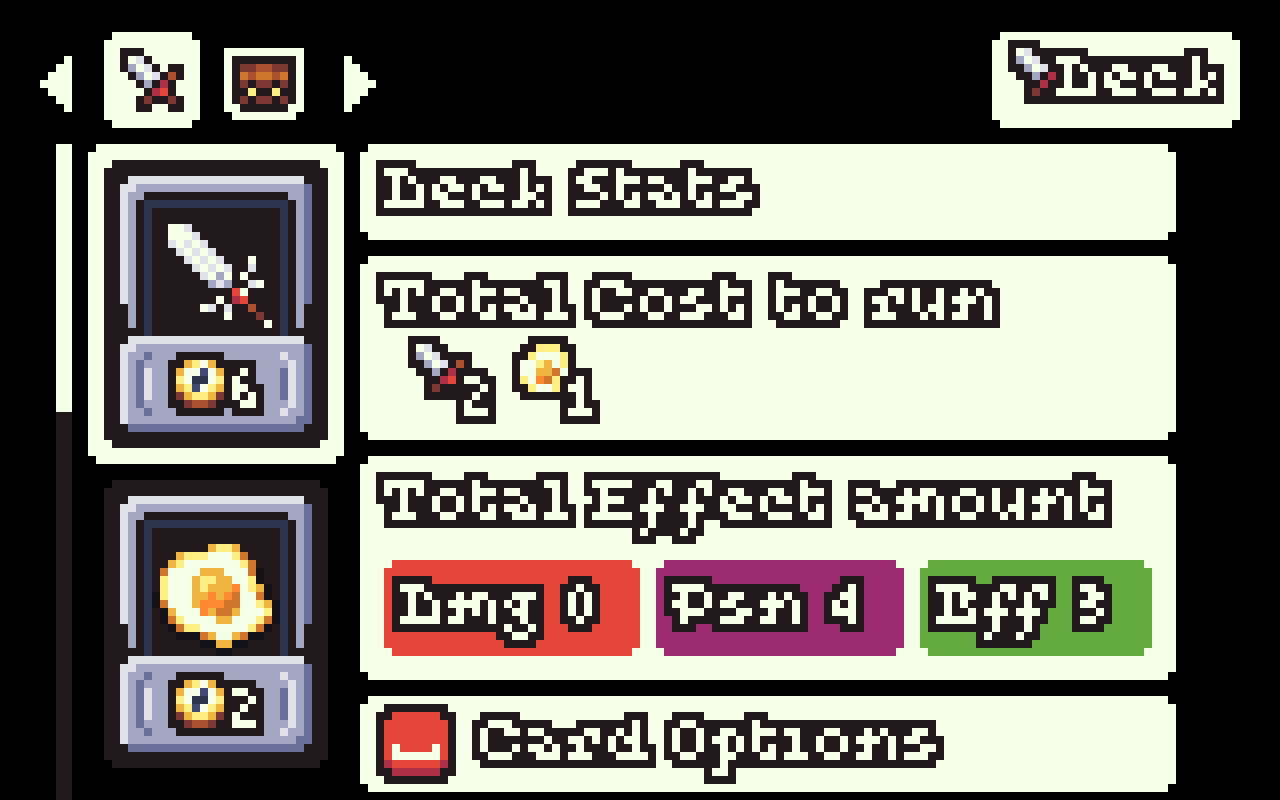 This deck deals no damage, but is able to deal 4 PSN and 3 BFF.

Effects and the Effect Area

Since this is a card game, combat can be complex to figure out initially. I've written a quick guide below on what it would look like if you're in combat. :)

To start combat, you will need to go up to an NPC that spawned in the dungeon, and interact with them. 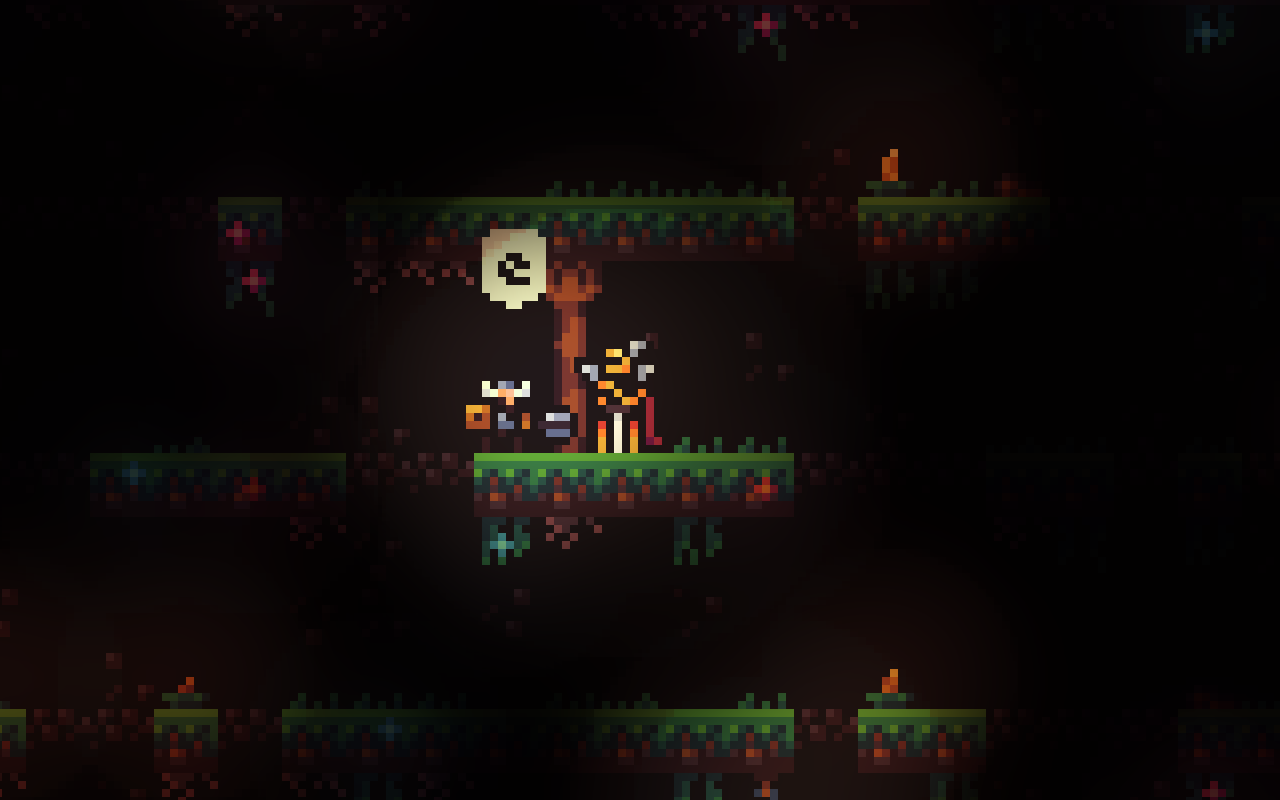 Press "e" to start combat with the Dwarf.

As soon as combat starts, you are prompted to wager a card.

If you were to lose the match, you lose the card you wagered to your opponent. This is true for the opponent as well since they wager a card from their deck as well. 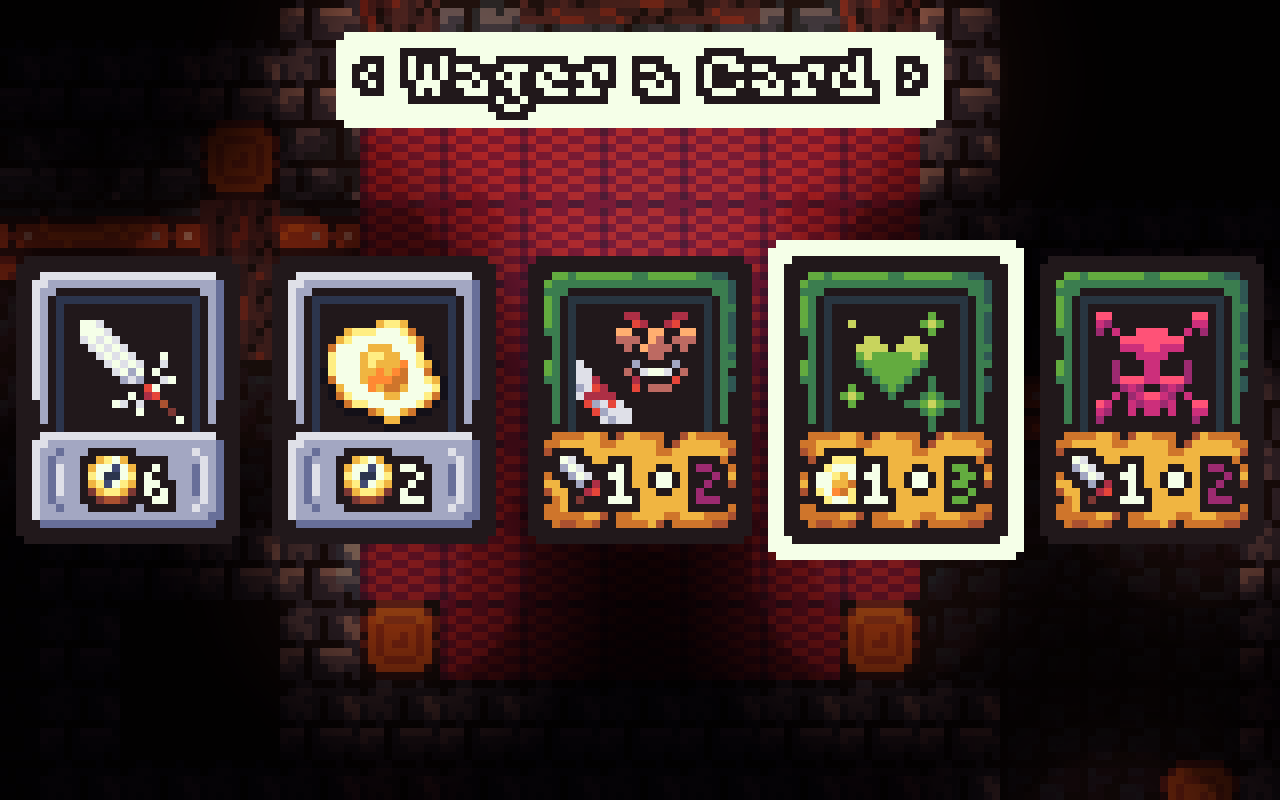 Navigate right or left and pick a card to wager.

Combat is turn based

You, your opponent, and the Sacrifice will each have a turn to place spells/move around. You can see who's turn it is by checking the "turn card" above the Sacrifice's health bar. The leftmost card is the person who's playing.

It's your Opponent's turn right now, next will be the Sacrifice's.

Once your turn starts, your hand/deck will move to the middle of the screen. You can pick one of the cards from your deck to place, or you can skip the turn. 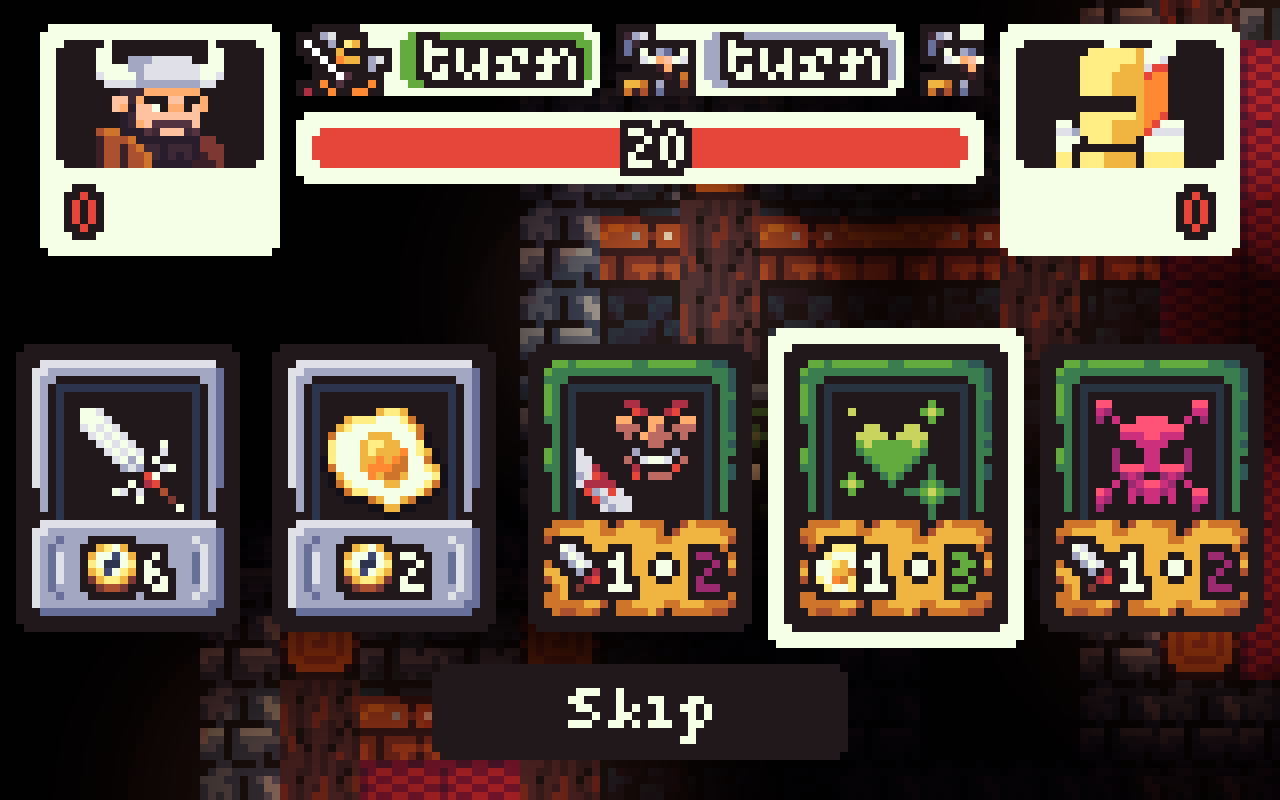 You're able to pick any card that is in your deck.

If you've picked a spell that you want to cast, you can freely move around the map to place that spell. Spells cover a 3x3 area, and requires the centre of that spell to at least be walkable for the Sacrifice. You won't be able to place a spell if it glows red! 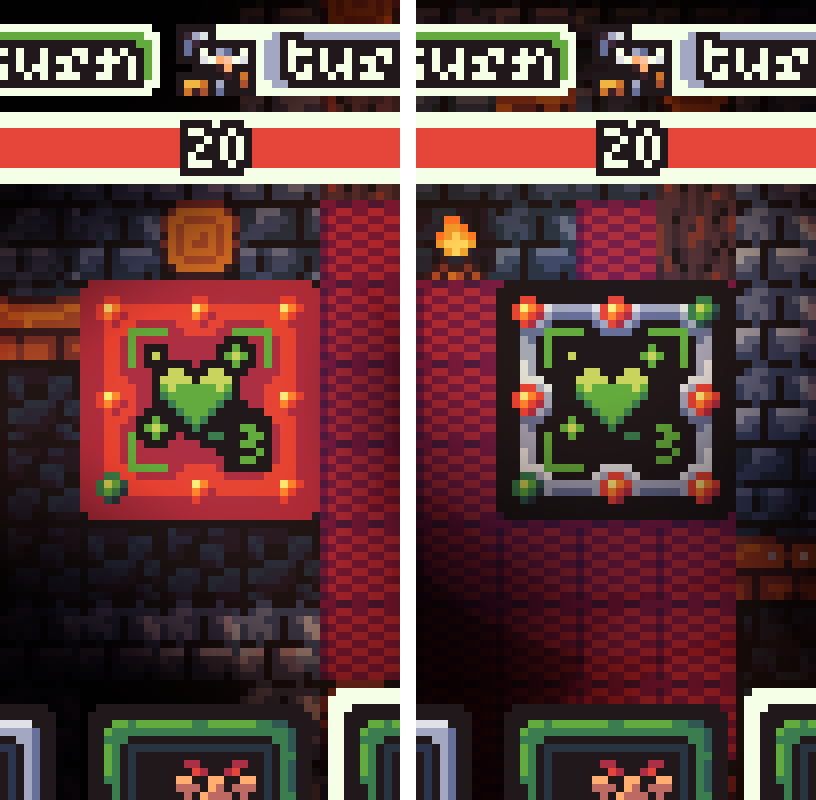 Left: An unplacable spell. Right: The spell can be placed.

When a spell is placed on the battlefield, it needs to be powered. You can power the spell by placing the item it requires (either shown on the spell's card or on the placed spell with a "?") next to it. 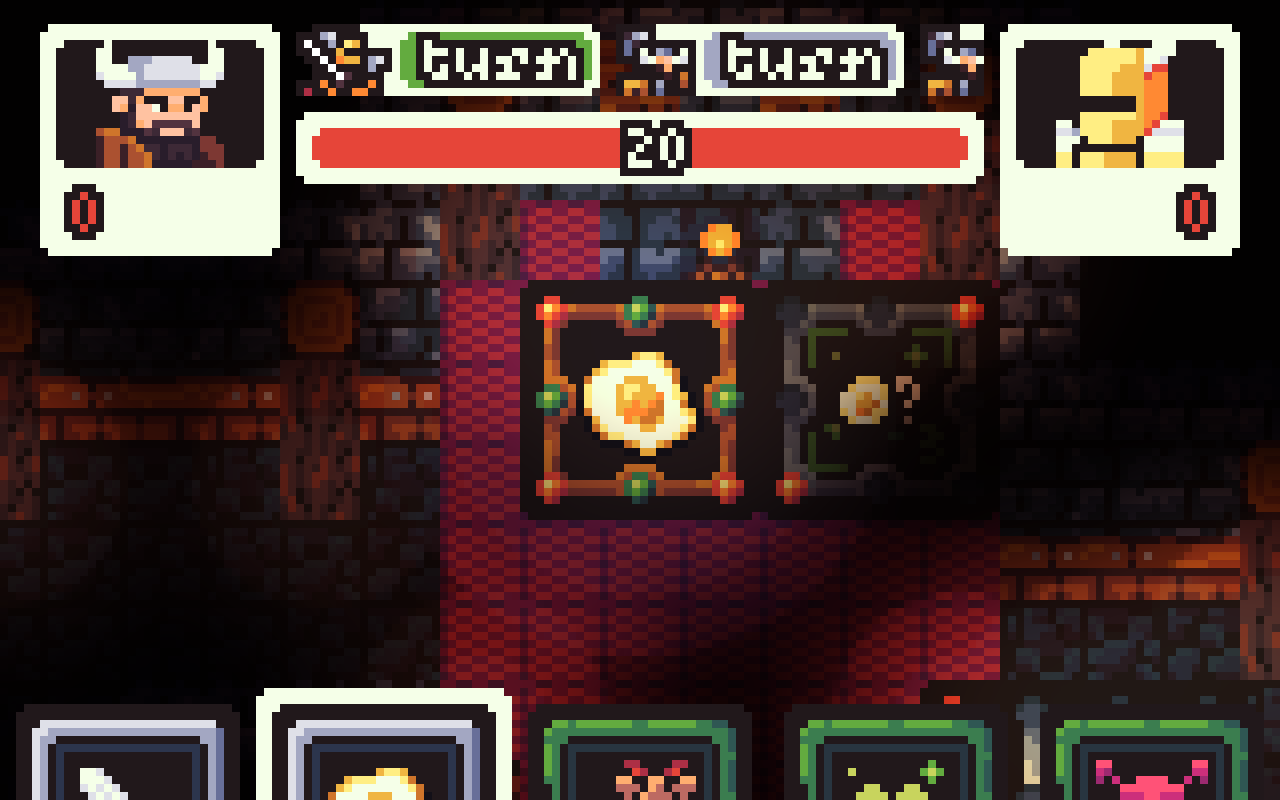 An Egg item is required to power the Cure spell to the right. 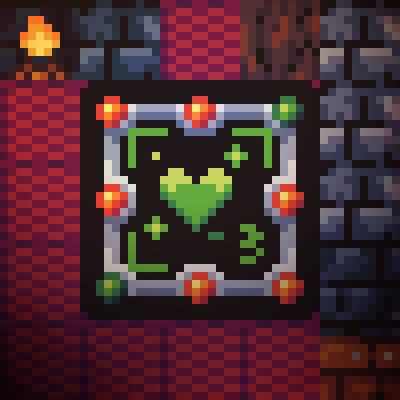 This Cure spell will trigger either in the centre, bottom left or top right. If the Sacrifice steps anywhere else, it fizzles.

The game ends as soon as the Sacrifice has no health remaining. The person (you or your opponent) with the most points, wins the game and gets the card the other person wagered. Did you get a tie in your match? Then both of you lose!

When an opponent happens to die, they will be "knocked out" for a few minutes before respawning and being able to fight again!

Ah that's unfortunate, but I understand. If you do get back in, give me an @ and let me know. Enjoyed following the progress.

Hi Steve, thought I'd do a bit of digging to try and find out what could be causing the launch crash issues on MacOS.

From initially just pulling the JAR out of the app launcher and running it from the command line, I got the following error:

Now from what I can see, this seems to be related to GLFW in the current stable LibGDX build not supporting the Apple M series processors (Short StackOverflow thread)

I booted up a blank LibGDX project on my own Mac, LWJGL app config works fine, no issues. When I change it to LWJGL3 however, I run into the aforementioned crash since LWJGL3 now makes using of GLFW for interacting with the display/window stuff.

Now it seems the LibGDX 1.10.1 Snapshot fixes this (uses an updated version of GLFW) issue. I performed the following steps to get everything to work:

Any new updates? Really liked following your progress but I noticed you disappeared off Twitter. :)

Hands down, my favorite so far. :)

Reply
1-Bit Clicker jam community » 1-Bit Jam General · Created a new topic Do we have to open source our code?
towersvault5 years ago

Title says it all.

I know a bunch of gamejams ask the "contestant" to open source their code. Is it a requirement here?

I might be looking for an artist as well (my pixel art I would classify as OK).

I haven't released anything due to frequently moving over to new projects for the past year as I learnt new stuff. I use Java, and should be able to make a game for PC, Linux, Mac and Android (no iOS sadly, I don't own a MacBook). I can send you a few of my older projects if you'd like to see what I can do?

I'm Clifford. I did completed an intro to Java course at a university about 3 months ago, and have been using LibGDX for my games ever since.

I'll be aiming to only use Scene2D (as I find it cool and easy to use for UI's and such), get my sounds from Freesounds and make my own art! :D

I use Eclipse mainly because I've gotten really used to it, and it's not a half-bad IDE.

Good luck to everyone taking part!