No Vacancies
Haunt a renovated bed and breakfast and scare away all the guests!
Tower & Moon
Strategy
Legends of Cobalt Lake & District
A family friend goes missing, and you seem to be the only person who cares.
Tower & Moon
Adventure
GIF
Nothing Valued Is Here
There are things in this world with more than nine lives...
Tower & Moon
Unduhagge
A surreal and dreamy exploration game.
Tower & Moon
The Itinerant
A miserable journey through dreams.
Tower & Moon
Synthpunk Ecoterrorist
Blow up capitalism with the power of riffs!
Tower & Moon
Rhythm

Just finished my first playthrough and it was everything I hoped and more. Definitely still digesting a lot of things narratively, and am garbage at writing meaningful reflections on such matters, but the storytelling was excellent and I can't wait to see what other endings have in store (especially since I feel like my playthrough was catastrophic and full of bad choices [or, non choices, if that makes sense]).

Also, on a technical level, y'all managed to do stuff I didn't even know was possible with RM2K3, which is always exciting to see. (Would love to learn more about any of the tricks up yer sleeves, but this probably isn't the medium for that .:P)

Fantastic work all around!

This looks messed up. I'm stoked!

idk who Suzie Doll is but this is weird and amazing. Nicely done! ^_^

Haha it is cute! And it is also very much the Shy Dance.

For an absolute first, I gotta say you did quite well. If the art is all original then it's quite good, and the spirit of YN is definitely alive in this project. Plus, I'm a sucker for anything alchemical and occult.

If you were able to squash the bugs (I found a few), eliminate some of the stock rtp assets, tidy up your maps, and add some music, you'd have an absolutely kickass demo.

Keep at it! I'd love to see how this project evolves. :)

Having fun with this so far. As with all the ddj5 entries I've played so far, the art is lovely. Also, I definitely dance like Lulu and I'm not sure how I feel about being called out like that :P

Not only is the art lovely, but I think this has been the most thematically sound DDJ5 game I've played yet. The ballet dancing, the porcelain dolls and statues with their implications of timeless beauty and youth...this manages to strike an effective balance between the symbolic and the surreal, and that can be very hard to accomplish.

Found some bugs:
1) You can keep picking up the knife. I have 8 knives in my current save file :P
2) Found another collision issue where you can go off the tiles in the uh...candy clouds?

I'm playing a bunch of ddj5 games today but I'm definitely coming back to this one to finish it. Got 4 effects. Still haven't figured out how to get any dolls though! 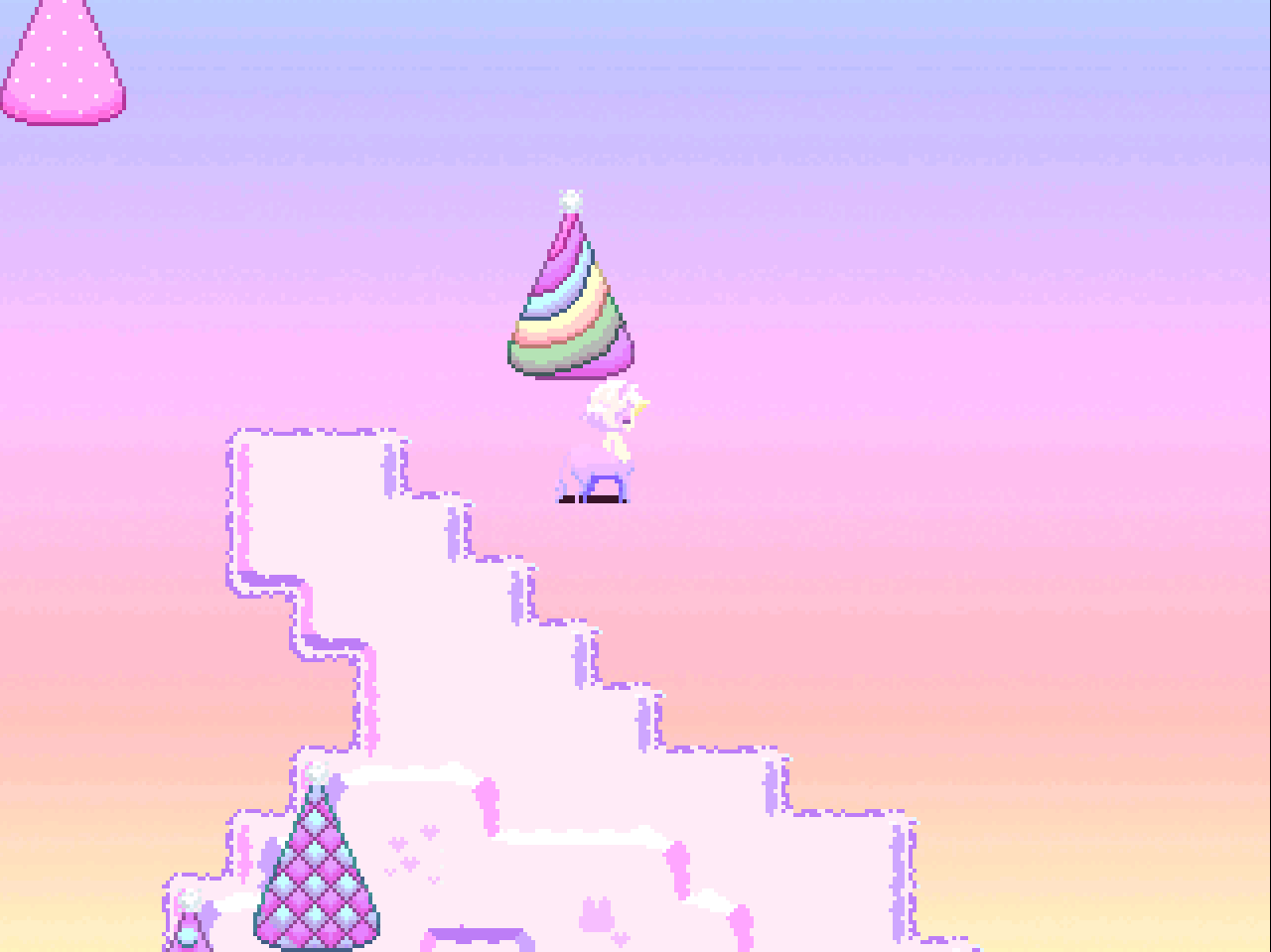 Ripppin through as many DD5 games as I can today. Yours is the first ynfg I've played that's in 3d and I hope it's a sign of what others have to offer because it was a fuckin trip. Love the wild transitions (some custom shaders you wrote, maybe?) and the generally wonky 3d vibe. Love that you made an homage to the YN red hell maze :P

I wound up down this corridor (there's a mouth, I think? behind me) and this glitchy shadow person followed me. I started to leave the corridor but the collisions really impeded my progress. I also noticed that, after transitioning between rooms, there was text in the top right corner that just said "ERROR". Not sure if that was some leftover dev stuff or if it was deliberate, but I haven't made much progress in the game yet. Like I said, rippin through just to see what everyone else did. ;)

Anyway, great stuff! And out of curiosity, what did you use as an engine for this?

The art in this is great! I was also really happy with the way y'all set up the area progressions and unlocking. If you don't continue to work on this, I hope you all work together in the future on something else!

This game is great! I've definitely still got a lot to explore but I'm enjoying wandering around as a spooky blindfolded bride. Also, your music choices were excellent!

It was great to watch this progress during the course of the jam! For something 'very rushed' it looks fantastic. :)
[also found a small quirk, if you press Shift while riding the panther, a text box shows up saying 'Fast Speed Test' or something along those lines]

Trying to do a 1 day tour of as many of the DDJ5 entries as I can. I started with this because I remembered it from last year but I don't think I got a chance to play it. Your environments are absolutely killer!

Thanks for giving this a play! :D

I was gonna consider rebuilding Unduhagge in GMS2 but I also start my new job tomorrow as a programmer sooooo... I think I need to make sure that my work for DD5 uses a lot less braincells. I'm using the official RM2k3. :)

Just listened to Dhampir and damn it's good. Gives me old old Autechre vibes while still having its own voice, and the piece just has a great slow evolution overall. Looking forward to jamming the rest of this!!

Just downloaded. This is definitely going to make my holidays. :D

Reply
Whisper Beyond The Hollow community · Replied to ｔｅｃｇｏｔｈｉｃａ in So good!
Tower & Moon1 year ago

lol yeah I figured you were aware that the fights were a bit weird, but I was able to figure out that I could crush the bug-things before they got to me, and I'm assuming you'll be including sound effects to emphasize that in the future.

There were two things that stuck out to me as a player. First, when you get into the locked room on the second floor, I had to jump to get across a lamp that was on the floor. It didn't look like something I should have had to jump over. My thinking is that there are two ways to go about solving that: 1) remove or shrink the collision for that prop so you can just walk over it; 2) make it more visually explicit that you have to jump there. Make it a tutorial moment to let the player know that jumping is even an option.

The other thing was that I didn't know where the entrance to the corn field was. The farm is pretty much surrounded by corn, and I walked around the whole level counterclockwise before I found it. I think the specific gate probably just needs a better visual signifier, like some tall fenceposts (vertical lines draw the eye), so the player would see the gate the minute they get out of the car.

Now, if I haven't already, I'm gonna follow this project and keep my eye on updates. Excited for what's to come! :D

Reply
Whisper Beyond The Hollow community · Created a new topic So good!
Tower & Moon1 year ago

I don't have a lot of time to play games from this year's jam so I'm glad I chose this one! It was nice and spooky, and the dialogue was pretty good too. I even managed to get nailed by a couple of the jump scares. :)

I know you're looking for bug feedback, but I didn't encounter anything game-breaking. That said, if you want any other thoughts, I would be happy to share.

Reply
HPS1 Halloween Jam 2020 community · Replied to F. Helgesen in So proud of everyone!
Tower & Moon1 year ago

The game is finished and has 3 endings. I just forgot to change that flag. Thanks for catching that!

Well, that definitely wasn't supposed to happen. Thanks for sharing your playthrough (and finding that glitch)!

If you ever wanted to send fan art, you could always reach me at chrisewick@gmail.com.

You should be able to wake up by pressing 9 (nine) on your keyboard.

You can use the 9 on the numpad too, but only if numlock is...on? Off? I can't tell because my stupid keyboard doesn't have a numlock LED.

If that doesn't work then please let me know, because it's possible you've found a bug!

(Oh, and thanks for playing! I'm glad you like it so far.)

I think this has the best art I've seen in the jam. It's really cool, and if it weren't for the fact that it's 1:30 am and my brain is turning into sausage, I'd probably be playing more of this.

Possible bug: The very first time I ran the executable I played for about ten minutes. During that time, when I'd open my inventory, I didn't always see the icons for effects. Once I ran the program again, though, I didn't run into that issue. Video games, amirite??

I broke the game by pressing Enter while facing upward and trying to interact with the bed.

The art style in here is great though, and there are some lovely set pieces!

Nice and tranquil! And I had a couple chuckles in the gallery. ;)

And thanks for the tag heads up!

Oh damn, sorry about this. When did you download your copy? I've been fighting with that bug for a while and I thought I solved it in the latest release.

lmk if the newest version works, and if not I'll investigate once the weekend's over (finishing my semester with some big projects)