There Will Be Ink
Stick figure armies battling in a notebook, just like you used to draw in class instead of paying attention!
summitfever
Action

There Will Be Ink community · Posted in Oh my gosh, this game is SUPER-cute and well done
summitfever264 days ago

Hey there! Whoa, ok let me run through these one at a time :)

You bet, Game Maker is pretty well optimized for 2D games like this. I've tried a few times to move towards Unity but it always feels so cumbersome.

I'd love to do larger maps, but it would indeed be hard to fit everything on one screen (less so with 4K+). Something like that may come along down the line, after the 1.0 release.

Prisoners are fairly new to the game. I mostly made them for a specific mission in the "There Will Be Ink" campaign. I'll see about expanding their functionality though.

Yes, please that map along and I'd be happy to take a look. I'd be curious to check out any other maps/campaigns you wanted to share as well. Please send along to hi@summitfevergames.com . I've also created a (so far pretty lonely) Discord server, if you're into that sort of thing.

Thanks again for all your thorough feedback. It's incredibly helpful and very much appreciated!

Reply
There Will Be Ink community · Posted in Oh my gosh, this game is SUPER-cute and well done
summitfever266 days ago (1 edit)

Hey there! Thanks so much for all the thorough feedback and for the kind words. I played Battlezone back in the day and Infested Planet and hadn't actively thought of them in some time. It's funny that some of those ideas must have been hiding out in my mind and then found their way into There Will Be Ink's design.

The game is very much still in development. Things have slowed down a bit lately (I had to take ft job in addition to part time jobs, darn pandemic), but I've never felt more devoted to or enthusiastic about the project. Lately I've been working through the next 8 missions (Act II) of the main campaign, adding tanks, new terrain, new badges and stats, and working on a full revamp of the stat system to make it more dynamic, scalable, and maintainable. More on all that in the next game update and dev log.

As for your feedback, thanks again very much for that. Some of the items are already on the to-do list, while others I hadn't previously thought about or are possibly already in the game. Here are some responses:

Thanks again for the thoughtful feedback and for playing the game!

Hey there. Thanks very much! I'm glad you enjoyed it. I have much more yet to add.

AZERTY support is now live, as per this devlog post.

Update: I've added "Keyboard Layout" to the options page, with AZERTY as an option. It will be present in the next release. Thanks!

Hey there!
Thanks for the feedback. Oh yes, I can imagine that would be pretty tricky. I'll add that to the to-do list and update this thread once keymapping has been implemented. The game also supports gamepads in case that is an option for you in the meantime.
Cheers,
Brodie

Thanks for doing this.
https://summitfever.itch.io/there-will-be-ink

I've just released a major update for my game, There Will Be Ink, a difficult, tactical action game for 1-8 players in which stick figure armies battle it out on a lined paper notebook, just like you used to draw in class instead of paying attention!

The update includes a new video tour, units, missions, abilities, AI, prisoners, wound system, tutorial, sounds, stats, badges, terrain, and a lot more! There is an itch dev log post with full details here, but if you just want to see what the game looks like in action, check out this new video:

This is a solo project, and any and all feedback is welcome. For those who use Twitter who may be interested in the game, I'm holding giveaway right now that you can check out here. 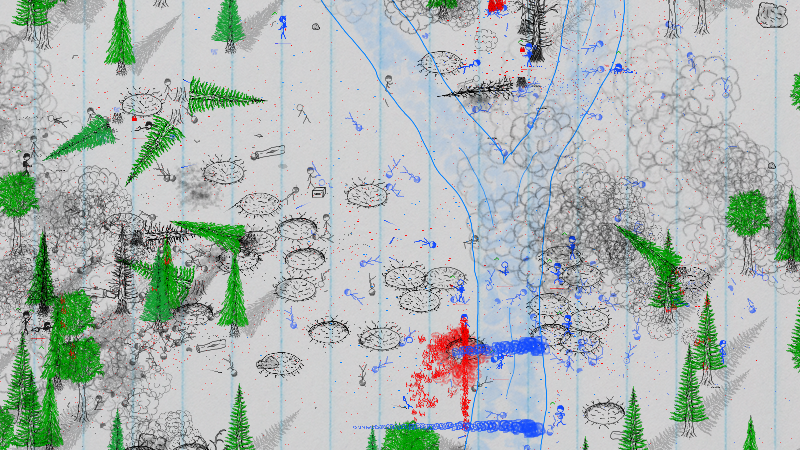 There Will Be Ink is a tactical action game that takes place on a notebook. Just out is a new update (Beta 4.2) featuring a new flamethrower unit, new music, friendly fire, and much more! In addition to that, TWBI is 30% off now until Monday, March 30th. Itch.io purchases include a Steam key, why not!

I hope everyone is staying healthy and safe out there!

Hey there, thanks for the feedback! There was previously a free build available, but that is no longer the case as the game has progressed much and the old build was no longer representative of the game. I've just updated the game description to avoid future confusion about that (thanks for the heads up). I may yet make another demo version of the game, but if so it won't likely be until version 1.0 or later, as the game is still undergoing changes. One option might be to purchase the Steam version and return it if it's not what you're looking for, though be sure to follow Steam's refund guidelines if you take that route. (itch's return process looks to be a little more involved: https://itch.io/docs/legal/terms#refunds ).
Cheerio!

Reply
itch.io Community » Game Development » Release Announcements · Replied to loukj in There Will Be Ink - Now in Beta!
summitfever1 year ago

Thanks! It is a pretty good time, though I miiight be a little biased.

Ahoy there!
There Will Be Ink is now in beta and is available exclusively here on itch (and coming to Steam). TWBI is a difficult, tactical action game for 1-4 players in which battles between stick figure drawings come to life. Check out a short gameplay video from the latest build here:

A summary of new features can be found in the latest devlog post.

Get an extra 15% off right now for the itch summer sale!

I've released a new build for There Will Be Ink, a difficult, tactical shooter for 1-4 players. Play solo or with friends in battles between stick figure armies drawn on a paper notepad, just like you used to draw in class instead of paying attention!

Check out the game in action:

A devlog with more details can be found here.

The latest build can be downloaded here on itch.io.

Constructive feedback is greatly appreciated. Thanks!

There Will Be Ink is a tactical action game for 1-4 players. Play solo or with friends in 4 player battles between stick figure armies on a paper notepad, just like you used to draw in class instead of paying attention! Here is a short trailer showing some gameplay:

An early build of the game can be downloaded for free, right here on itch.io: https://summitfever.itch.io/there-will-be-ink

There Will Be Ink is in active development and it is my first game, so any constructive feedback is greatly appreciated.