Try playing it with a friend, or a group; you might find that a good brain's trust can unlock them without too much work. (Though, playing games with other people is difficult at the moment so stay safe above all!)

Thanks for giving it a read. :)

Quake? I'll give you that Quake was one of the best games for modding. ;) I had a ton of fun modding that game back in the day.

1. The way I did it in both of my earlier Bitsy games was to create multiple rooms, position the objects in different places in each room, and then link the rooms together with exists so that the objects look like they are moving but you're really just changing rooms. In fact the side-view scene with the bus in this game is achieved with that method.

2. But I decided to try something different, for the most part, with this game by directly modifying the game's javascript code. I set up a "step" variable which increases each time you move, and I change the position of the room's sprites according to that step value with each step. It turned out to be quite a usable approach for achieving a large number of pathed objects across many different rooms.

Thanks Adam :D
(and thanks for all your work on Bitsy too! it's a lot of fun)

Yeah, I see there's a hack available to extend the size of the textbox and I'm working on a post-jam-director's-cut now so I might look into that.

Thanks for checking it out :)

When you go in the house you're on the ground floor. The white ring is up on the first floor.

The limits/constraints for what the game itself can see are created by the game developers themselves, so if we're serious about improving character-context then we need to improve in-game tools that allow us to determine things like: what characters can see and have seen, what they would be thinking NOW, and they WERE thinking; and then to organise this information into logical hierarchies so that we can easily pick an action/reaction that makes sense given all that context. At that moment our gaves have no technology for any of that. Meanwhile, graphics tech has progressed to the point that we have dedicated parallel processors capable of producing nearly photorealistic visuals. That's the imbalance I was hoping to highlight here.

And as for other games, here are some that were considered but didn't make the cut:

Positive examples:
- Hades (merged it with Bastion)
- the Dark Souls / Bloodborne games do some interesting things in a particular facet of this idea
- Portal's dialogue is very cleverly reactive to what the player is doing
- Telltale's Walking Dead games appear to do it though on subsequent playthroughs you can see that they're just very cleverly designed as to give the impression

Negative Examples:
- Watch Dogs: Legion
- Tomb Raider
- Assassin's Creed 3
- any game with a waist-high obstacle that you can't jump over or a stack of objects in a corridor that you can't either pull apart or just crawl through but are instead stuck completely unless you find some random route around

I submitted https://sumaleth.itch.io/9underscores a few days ago and the offer still stands.

First; you can type on the title screen and on level screens.

Second; the 3 icons on those levels give clues. The first one shows 9 underscores, the second is a reversed musical note, the third is a 5x4 grid with all but the last 3 boxes filled in.

Reply
itch.io Community » General » Release Announcements · Posted in _________ (What Even Is That Thing) is released!
Rowan Crawford2 years ago

1.2 is published. This fixes a couple of levels, improves readability on very high resolutions, tweaks some things, and adds a Windows 32bit download.

Reply
itch.io Community » General » Release Announcements · Posted in _________ (What Even Is That Thing) is released!
Rowan Crawford2 years ago

We just published 1.1 which improves the intuitive flow from regular levels to secret levels, plus a few small bug fixes.

Reply
itch.io Community » General » Release Announcements · Created a new topic _________ (What Even Is That Thing) is released!
Rowan Crawford2 years ago

Now reach out, carefully, until you touch something. Feel it; examine its shape, its edges and contours.

Now tell me what it is. 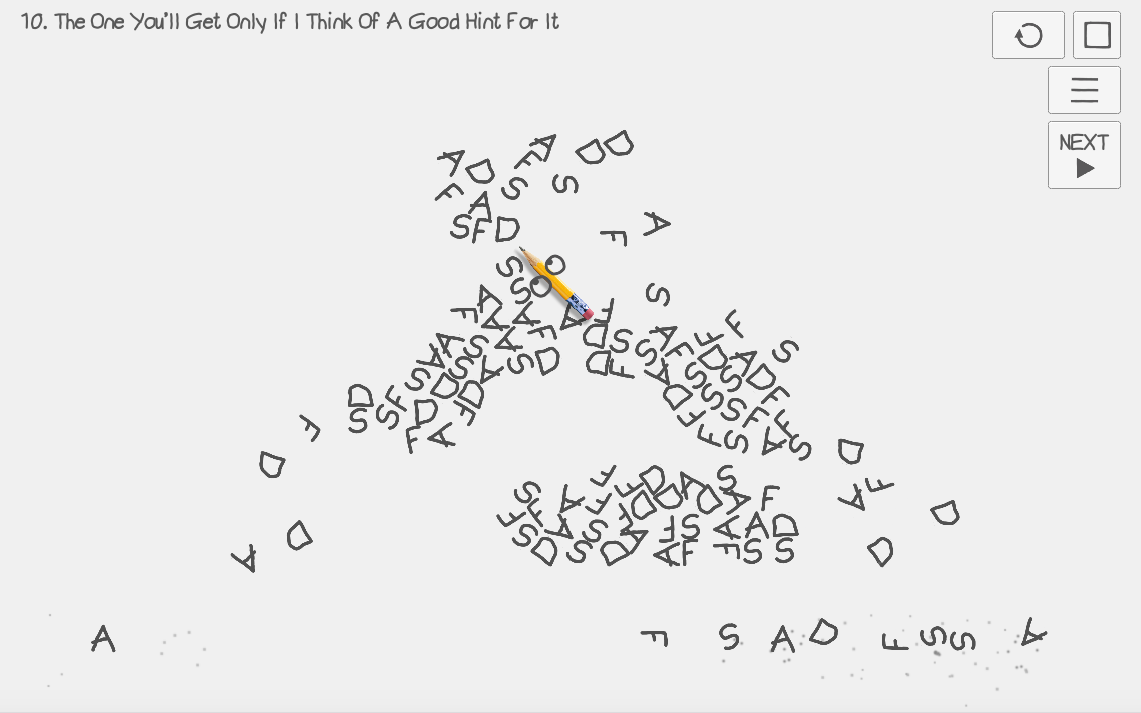 Found the answer in the game's source: you now need to use:

Unfortunately, all of the online tutorials for Bitsy still use {say ..} so that's going to lead to some confusion.

Can anyone tell me why this sprite dialogue-

-prints testing: and nothing else? Am I misunderstanding how "say" works or is something broken?