Thank you so much for the kind words s20! It means a freaking ton you enjoyed my silly little game :) I definitely need to add a volume slider in my next game! Thanks for the feedback! And I'm so happy you enjoyed the boss battle hahah. It took a lot of work! Good luck getting 100%! You'll get a little reward for it :)

Hey M4rek, you're not the only one suggesting a volume controller! Definitely need to add that to my next game! Thanks for the suggestion :)

Thank you for giving it a shot!

Heheh, yahhhh the physics in Shrine to Anubis isn't the best. I sort of programmed myself into a corner with the player's physics and it's one of my biggest disappointments with the game. But I'm glad you enjoyed it regardless :) Thanks Axtros!

Hey Lman60, thanks for the criticism. I definitely wish the game was longer and had more features. Turns out it's very time consuming to be a solo game developer hahah. I hope my next game works better for you :)

Thanks Gghaz! I'm glad you had fun with my little game :) And thanks for all the nice words!!! The boss bottle took a long time to make hahah. Hope you can get all the gold some other time :)

Thanks for the amazingly kind words! It really means a lot you enjoyed your time with my game :) I hope I can give you another fun experience with my next game!!!

You have recently discovered a map to the fabled Shrine to Anubis deep in the Kaylo desert. After days of travel you finally find the temple to Anubis's shrine. But who said exploring was going to be easy?

Jump, dodge, and loot your way through increasingly tricky levels as you try to find Anubis' final resting place. Just so you can prove to all your other college professors that the ancient Egyptian gods were real!

Pitch/Information: A 2D puzzle platformer where you control both a kid and a mermaid, as they have to work together to overcome obstacles and trials.

I'd like feedback on: Anything! Let us know what you think! We are aware of some physics bugs with walls, the tutorial and water levels not being synced correctly. But otherwise it's all good!

Up Shore is a 2D puzzle platformer about a little girl and her mermaid friend set in a war torn village. The little girl and mermaid will have to work together in order to overcome obstacles and trials in their path.

This game is currently being created by a team of 8, which all of are doing amazing work for the jam these past few days.

The designers have been hard at work creating the story and mechanics for Up Shore. They've got the core idea of how they want the game to look and feel to the player along with some basic mechanics. Now a lot of the job is communicating with the rest of the team to make sure everyone is on the same page. They also are starting some level design and some fancier game mechanics if we have some time before the end of the jam.

Audio team has been working especially hard, putting up music for the general tone of the game. Below are two sample concept audio of the atmosphere for our game. They both definitely give the sense of a somewhat dystopian world.

The Art team has working some great concept art of the two main characters in the game. We're all super impressed with how the little girl is going so far, and the design idea of the mermaid. We can't wait to see what more is to come. 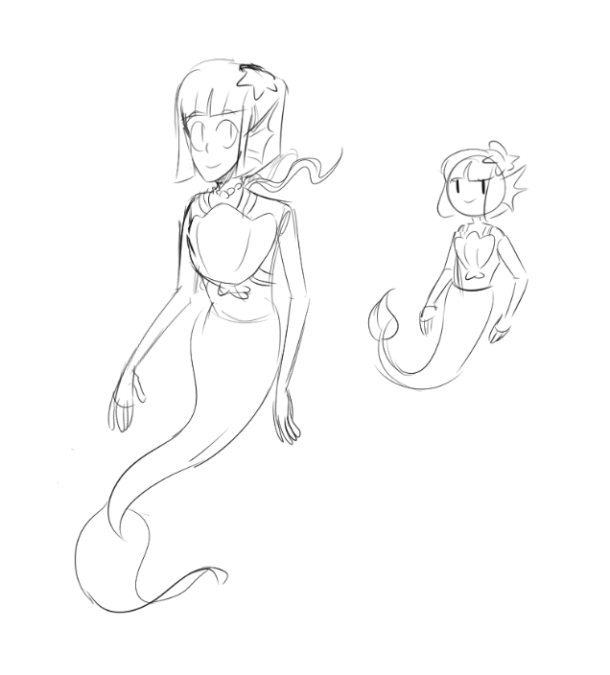 The Coding department has been working on creating the basic character movement and interactions with each other. The mermaid can only move while in water, but can be picked up by the little kid if needed. We'll be fine tuning the controls as the day goes by and implement even more mechanics like picking items and hitting switches.

That's all for now! We'll keep posting updates as we make more and more progress!