Cool!  My partner and I are Dark Sky Association members, but I didn't know about the Bing Cares thing!! Switching to that now! <3

Love this!  Play if you want have a chill time while experiencing someone's melancholic state of being caught in a loop of self doubt.

The family stuff and imposter syndrome are super relatable to me, the former being something that I've never seen expressed before in a way that I completely relate to like you do here.  The exact thought processes behind responding to messages is a constant issue that I face.

The pacing of this is great.  Revealing a few new things to try here and there really added to my interest in seeing what happens if I keep playing.  The LD part really hit me right.  Being able to create the new intro page to the game really had me.

Thanks for sharing your perspective with us (random people).  I know it can be hard, but all we can do is keep trying.

This is very nice. I've always been interested in passive games like this, and this theme obviously fits that format well. I've recently been trying to figure out if I can do a mix of passive and active experiences, so like this, but if you choose to poke around you can interact in some minimal ways.  That has nothing to do with your thing.  Just thinking out loud now.  haha  Great work!

Thanks for the comment!  I’ve  been thinking about making it into a puzzle game focused on those gravity points.  Maybe having masses form once enough particles catch on them.   Each mass would form a biome that has a specific vibe like forest, water, rocky, metal etc.  They’d alter the audio space in a similar way too.  In time.  Haha.  Thanks for giving it a try!

Love the camera framing and how it kept the focus on the routine.  Nice job!

Love the aesthetic of this.  Music and art are perfect together.  Elegant design.  I'm playing on the browser version and couldn't seem to "swipe" to connect the pairs, though.  I'm sure this makes more sense on the phone.  Great work either way!

Very cool!  Love the concept.  It got stressful very quickly!!

Nice!!  I like that you can disable the zero gravity mode mid jump.

And same.  About the length. haha

Oh, thanks!!  Unfortunately, A Crimp in Time wasn't built on my computer but another dev on the jam team that I was on.  I just did audio programming and music/sfx for that.  I have built games via Unity on my macOS and still get those weird security precautions.  Actually, your game here does too.  I can still "Open Anyway" from the security menu, but it doesn't let me open it the traditional way.  I've noticed that if you download the Itch.io app and start games from there, almost all of those issues go away.

Yeah!  I think I'm locked onto the phone.  Here's a screenshot. 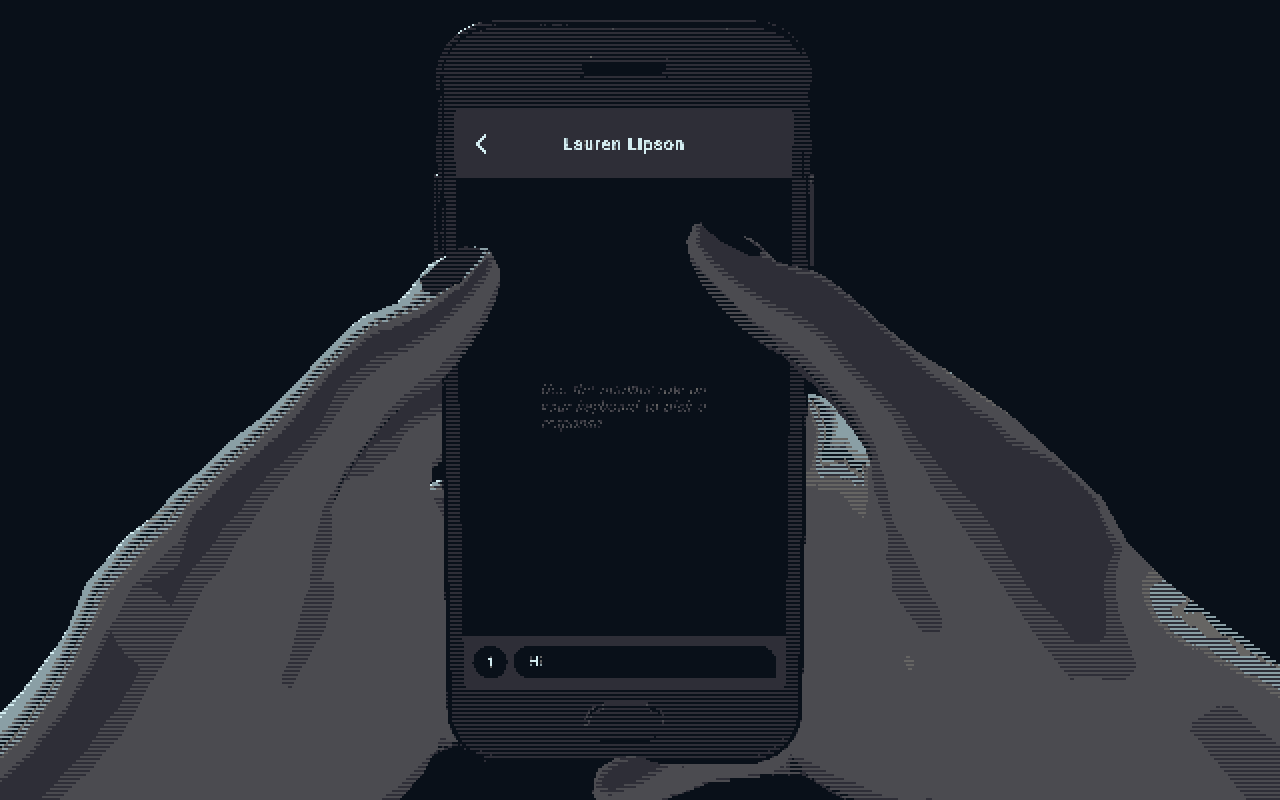 Is there a way to lessen the screen effect a bit?  I couldn't read any of the text on my screen!  Love the vibes and would love to try it again.

This is a dreadfully awful review.  The only info to be gained from it is to remind the reader not to be a terrible ass to a dev that’s just trying to make stuff, improve, and make more stuff.

Awesome!  Thanks for playing!!  Glad to hear the composition worked for you.  It's hit or miss with browsers as to whether or not it plays.

Oh!  My main critique was going to be that the mouse crank can get tricky when your mouse goes outside the bounds of the game window, but now that I know it's supposed to be for the Playdate, that's really a non-issue!  This would be so cool to play with the crank.

Hey all!  I tweeted about how I was working on a sound pack for Mixolumia that is inspired by a deep forest setting.  I've got a nice orchestral / electronic music track going and am playing with bird wings flapping and rock sounds for the move / drop sfx.   Maybe we can make a compilation of sound packs in the theme of Nature!  We can tweak the theme if people want, but I think it's a starting point!  To participate just show your interest in here!  Feel free to post your progress and we can get this thing rolling!  Not sure how it'll go but we have to start from somewhere.

We can eventually set it up as a project in Itch that can be purchased and we can all share in the revenue too!

Thanks again to davemakes for being so open with this whole process.

Yeah.  I've been working on finishing the last update because the jam wraps up today! Thanks for the bump.  Just uploaded the trailer and images.

Awesome!!  I did the sound implementation for the game and I have actually yet to play through the whole story, so I'm excited to see it all in action.

Reply
When Rivers Were Trails community · Created a new topic I needed this game <3
Space Owl!2 years ago

I needed this game!  I have been digging into the culture of Native American tribes in my region.  I live in Fort Wayne, Indiana, so the tribes that I'm most familiar with are Myaamia, Delaware, Shawnee, and Potawatomi.  I have been familiarizing myself with the Myaamia language since they have some great online dictionary apps that digitized their language with audio pronunciation clips too!  There were some similarities to the Myaamia language in the Anishinaabe language presented in the game.  The Myaamia Center at Miami University in Oxford, Ohio is responsible for most of these apps.  Check them out if you haven't!

Overall, I think this game is a powerful way for people like me of Euro-American Settler descent to experience a more truly represented history of the land.  Experiencing the strife of the various tribes, and how they had to make incredibly complicated decisions that weighed negative effects on their own tribe, and other tribes around them, against retaining their very right to the land that they live on...  I can't even begin to scratch the surface of the complexity of these decisions, but this game makes a helpful step in conveying that.

I also weighed the design choices of this game against the game that it is comparing itself to, Oregon Trail.  One thing that I noticed was that this game seems to make your decisions weigh less than those of Oregon Trail.  I haven't played that game, but I have heard that it is notoriously difficult to stay alive.  When you consider that Oregon Trail is basically propaganda to push forward the romanticized strife of Euro-American Settlers, and to convey that we (Euro-American Settlers) now have earned this land because of all of that... creating the game so that it is difficult to survive effectively conveys that message.  Flip over to this game, When Rivers Were Trails, I noticed that the game made it fairly easy to survive.  I played for 3 hours, and died only toward the end and restarted from the last save.  I believe, and I'm only speculating, that this is because the game devs wanted the player to learn these stories and learn more about the complexities of the tribes decisions during this pivotal period in this land's history...  Oregon Trail was incredibly formative for people my age who grew up playing it in school, and what did it teach us?  That our ancestors struggled to get here when all paths lead to death and dysentery.

I just wish that we could go back in time and put this game on all of those computers instead.  Teach kids what was and still is really going on around us.

Anyway, I could write more, but I just want to say that I love this game.  Super well drawn, written, paced.  I love how the gameplay mechanics like hunting, canoeing, and fishing broke up the usual flow of the game.

Thanks for releasing this!!

I've been following the work of Elizabeth LaPensée now and can't wait to see how work in Where the Water Tastes Like Wine plays out.  (I don't know why I haven't played it yet!  :P)

Love it!  The music and sound made me smile the whole time.  Thanks!

send me an email at spaceowlproductions@gmail.com    If you want to connect me to the game via Unity Team or GitHub, I could connect an FMOD project to it!

Might take you up on that!  It’s built in Unity?

Nice.  Works really well for an hour game!  I'd love to see the shapes synced to music.  The shapes could each have their own harmony.  It took me a minute to realize that I hit the number buttons to fire the respective bullets but after that the game was smooth.

Wow!  This is an amazingly well polished and fun game, especially for a LD!  Nice work.

Very nice!  How did you get the music to be specific to each room?  Did Bitsy get an added music feature?  I have made a few with music but always had to do the trick where you load a YouTube video behind it by altering the HTML code.

Very tense.  One of those experiences where everything would be heightened to pure terror if a murderer just suddenly walks into the room towards you.  Definitely captured the tone of Suspiria/Inferno.  Nice!

Wow!  Thank you.  This is one of my favorite things that I’ve made so it made my day to see your post. Thanks again!  <3

I loved seeing the progress of this game!

Hey Adam!  I don't think I ever posted mine to be added to the collection!  Here they are!