My friend told me about this old PC game.  It reminds me of your game, so I wanted to post it for you to see:

Mouse is VERY sensitive and too inverted LOL

ngl I absolutely love this game even though it's so finicky.   I kept dying on level 2 trying to skip platforms to get to the end sooner.

Add a drop shadow and make the camera less sensitive and you're ready to add some more levels.

Neat concept, I liked the ideas behind the combat.  You got a lot done in the jam period too, haven't seen any other Metroidvanias.  Awesome job tackling a large scope project in 2 days!
Rolling dice at the enemies seemed very slow though, took a while for them to land.  So eventually I got bored and just jumped past the last several enemies.

I also brute forced most of it.  At a certain point I had to pull out a real die to figure out what orientation to aim for lol.  Kinda wish I could rotate the view to see all sides of the die.
The speed puzzles were unexpected, since most of the game seems more like a brain teaser.

Very cool game, I could definitely see this growing into a charming and enjoyable full title.

- Questionable hitboxes
- Goblins were pretty dumb, and take a while to kill early on.

Kinda rough around the edges, but very clever and had some hilarious moments.

You nailed the Old FPS feeling and it felt good :)

- Shooting enemies on hills was a challenge.
- Using the die as both health and ammo felt unintuitive

Rolling a die to get an ammo count was extremely clever.  I would keep playing this game.  Nice job!

Unfinished, but it's surprisingly fun to  play with already :)
The gif you posted reminds me of the arcade classic Motos, which was always my favorite Namco game.

Sick!
My first thought is that since the outer enemies are shooting at you, it would be cool to shoot back at them.  Maybe when you roll a number, you get that many shots to fire back at enemies.

My main question in playing it was "Do I play it slow or should I roll constantly."  I got my score by mashing the die roll button and just trying to stay alive in the bullet hell that ensued :)   My slower strategy involved trying to crush every enemy I could before moving on, but playing the slower / more strategic game didn't pan out too well since the outer enemies were putting on constant pressure.

Feels very short.  The real fun is playing it over and over to get a higher score :)   Kinda wish there was a "par" or a Rookie/Pro/Elite score goal.
I wish there was a way to kill the outer enemies :P  Jump feels kinda useless

Incredibly polished though!  Visuals, sounds, enemy designs and attack patterns are all very smooth and beautiful.  Aside from the restart glitch, no bugs-- this feels very professional.

717 killed on my last run!  (Itch appears to be hiding the screenshot, not sure why)

It was going a little slow, so I put it in on my side monitor as an idle game.  Eventually I forgot about it tho.
Simple and easy, but neat concept.
I kinda wish there were a slider to fast forward (in unreal, change World Timescale) so that I wouldn't have to wait so long for the enemies to get tougher.

It takes a while to learn everything about the game, but it's so much fun as you figure it out!  I kept replaying it to try to get to the boss.

Also got stuck on the last level.  Last level before boss, but instead of finishing the level and giving me a reward, it just showed "YOU WIN!  NG+ Unlocked."  But the button for "Menu" did nothing when pressed.  I could see the pressed animation, and tried my KB, which also made it show the pressed animation, but nothing happened.

Oh well.  I really did have a lot of fun with this game, spent a couple hours on it trying to get to the end :D

- Read the "How To" within the game, not just the one below the game on the itch page

- You can only place the dice at the bottom.

- When the die hits an enemy, the number on top is the damage amount

- Red bars above an enemy represent the damage it does

- Plan your moves before starting to roll dice

- Avoid the mountain levels, they sometimes soft-lock the game

What are your system specs if you don't mind my asking?   That way if other people crash, I can try and see if there's any common thread,

Oh yikes, I have never seen a crash.  Sorry about that!

A couple times I've had the dialogue UI stop responding, and pressing the space bar seems to fix that for some reason.

Same, I read the rules here on the Itch page and skipped the in-game Instructions since I read the ones on this page below the game :P
The in-game instructions are much more clear.

Edit: Game is tons of fun btw!  Love the combination of strategy and luck.  I have been playing over and over to try and get to the boss.
(I got stuck twice on Mountain levels because no enemies spawned, I can send screenshots if you want.  Tried rolling my dice around the whole map to make sure, and nothing attacked me between turns so I think it's just empty)

I love the music, and the visuals are pretty great.  Not really a fan of the physics tho

Top-Down Shooter in which the player has One comet.
Left Click to Throw, Right Click to Return
Short and Sweet.

Nice idea for a thread!  I'll be checking out some of these other games

Wow, 60K views from some Rooster dude in Korea!

Thanks for giving it a go.  Feedback is always nice, and it was an amusing play

So I really like the "Admin" feature, under which you can add multiple owners to a game on itch.
I have started using it because it's really handy to share the power of editing  a game, and it has worked flawlessly until now.

I'm trying to submit my game to the 7DFPS Jam, but even though I'm an admin on the game 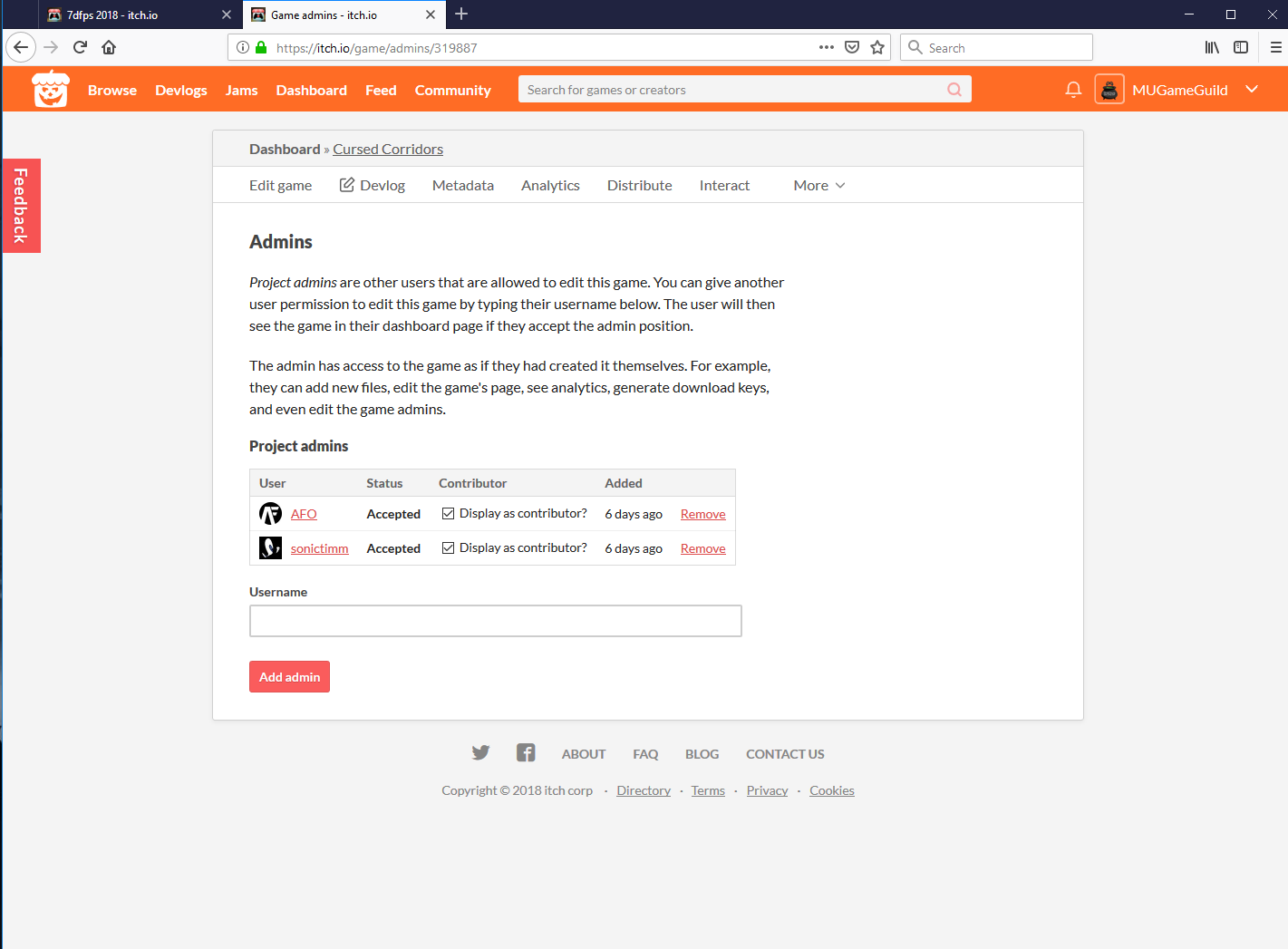 However, I cannot submit the game.  The account that uploaded it is still able to submit it.

I'd appreciate it if you fix this issue.  The account that uploaded it is a club account, so I may not always have access to it, and I don't want to lose control of any of my games.

On second thought, I don't know if it really was the first level-- it seems like the edges are cut off.  The worst part is not seeing your character because its off-screen

XD it was like a year ago, it was a fun jam though.
I didn't play every level, I think I played 1, 2, 3, the last one, and one other one.  I never got too frustrated-- even though I didn't understand the rotation mechanic, I found the concept interesting and totally different (I love playing games with unusual mechanics)1.  Aside from the last level, I beat them without using rotation, and it was very cool and satisfying to get to the end tile.

Very nice submission, feels much more like a full game than most of the others, especially because you included multiple levels.

Not particularly polished, but for a student project I'd say great job.  It's fun and you captured something unique, which is rare for these kinds of games.

Very clever.  I love the visuals (especially the river), you gave it a lot of character while staying within the rules.

It seems a little long, and I could have sworn it was different the second time.  Is it randomly generated?