Ahhh yes. The mighty golf level. We call it "the pendulum level" but now that I think about it, 'golf' sounds more proper. We really didn't expect players to spend enough time in our game to come up with a solution to that level.

About the bugs, cut us some slacks there. We weren't able to playtest it enough due to time constraints but we're glad the bug helped you finish a level (completely intentional btw).  We will release a bug-free version with more levels right after the voting period ends.

Yes, the reason why this idea struck out among other game ideas that we had was the flexibility and dynamicity of the levels. Physics-based puzzles ftw!

We're really thankful that you thoroughly played our game, and we're glad you enjoyed it despite the bugs. Cheers!

That would be a pretty good QoL improvement. We will definitely include that in the next iteration of the game. Thanks for playing!

And apologies for the bugs! We will release a bug-free version as soon as the voting session ends.

No, the TV isn't interactable for now because we were short on time to include the interaction. We will be making another version of the game with a bit more depth and interactivity. Thanks for your feedback!

Thank you!
We did try tinkering with the player's movement speed and settled down with the current one because it felt a little more natural. We will take your feedback as another reason to tinker with the player's speed more ;) Again, thanks for the suggestion.

Thank you for your feedback!
We're planning to release a more polished version with a backstory and a few more things to do in-game. Stay tuned for that!

Loved the visuals and the sound

Loved the graphics. Controls are a bit clumsy but maybe it's just because of WebGL. Good work!

I guess you gotta find one to know ;)

Well done for your first project! Loved the game

Yes and the glitch effect with, i suppose, with chromatic aberration? Really loved the visuals :)

Thanks to you guys for hosting such a wonderful jam <3

Hello everyone! Hope your game jam experience is going good just as mine :) Here's my game that I built in 3 days using C# and Unity :

INFORMATION: VELOCITY is a fast-paced, infinite side scroller, where you match your character's colors to that of the tile below you. As you score more points, the velocity of the game increases. Different pickups like Slow-Mo and Decolorizer can be found on the way to help you reach your highest velocity!

The name cracked me up xD Good job, great game!

Really liked the aesthetics and the game feel. Keep it up!

VELOCITY v2 is out!

Finally after 5 days of arduous efforts, I finally was able to build  a game from scratch.

Also let me know if you encounter any bugs or have any suggestions! Enjoy!!

Hoina bug ho tyo. Kaile kai hudo raixa, I will fix it in the next update :) Thanks for feedbacks

Loved the game! Keep that up :)

Will surely do that in the next update!

Got it, thanks! Also, do you know how to remove the 'trial version' watermark? Im not using any cracked version and im not in China, Taiwan or HongKong.

Wow thank you so much. I was struggling with increasing speed over time with my script. This code should really help me tackle that. I'll try it for sure and let you know ! <3

Thanks for the reply!!

For sure, I will try tweaking my player movement script but I don't exactly know what the Unity internal input system is. Is it the physics system? changing velocity? Would be great if you could explain it a bit for me :)

Changing gravity sounds really cool. I will surely try integrating it into the game. And obstacles too :)

Really appreciate the feedback. Currently, I'm a one-man team xD So nope, no one's helping me. But I will reach out to you, if I stumble upon any problem.  Again, thanks for the reply

VELOCITY, is going to be a geometry-themed side scrolling infinite game where you can change your color by pressing various keys, different colors being mapped to different keys. The goal is to match your color to the randomly colored tiles below you. 'X' mistakes, and you're out.  You can pick various upgrades on the way such as 'The Slo-Mo' and 'The Decolorizer', which I will talk about below.

Started off the first day 2 hours after the Game Jam started. 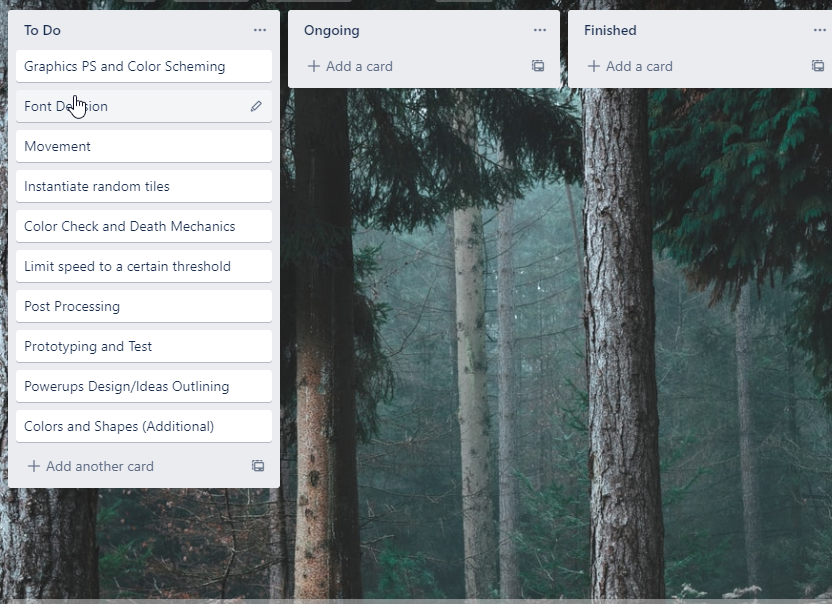 With that being set up, it was now time to rock and roll !

Since I was alone in my team, I started right off the bat by making graphics in PhotoShop(PS). I'm quite okay with PS and because the theme is "geometrical" all I had to draw were a few shapes. Without spending much time on it, I made these shapes in PS:

For the player,  I made a small white colored square. Why white-colored, you ask? Because Unity can  change sprite's color via SpriteRenderer only if the sprite is originally colored white.

I was able to quickly find great color combinations and schemes from the free website Coolors. Highly recommend checking it out.

For the font, I downloaded one called 'Velocity' from dafont.com and yes, you're right - that's where the game's name was inspired from ;)

Note: The strikethrough means completion of the task xD

For Movement, I quickly coded a script where the player's position(transfom.position) increases every fixed frames a second, times the moveSpeed which I could manually configure in the editor. Here's the code for movement:

Instantiation of random tiles was a bit tricky.

I created an empty GameObject named TileSpawner and attached a script into it. The script makes it so that the 'Tiles' prefab, which were of three different colors (for now), is spawned at TileSpawner's position whenever it is called. Now, all I had to do was spawn TileSpawner, and it would spawn random colored tiles at it's position.

Hence, I made a circle collider along with the TileSpawner prefab. Whenever the player collides with the collider, it causes a new TileSpawner prefab to spawn at a certain x-position ahead of player's position. Boom, done! Worked flawlessly, at least for now.

For Death mechanic, I had to check if the tile's color matches with the player's color, which was quite easy.

I attached a script in the Tiles prefab. The script checks it's color and the player's color by accessing it's SpriteRenderer component. If the condition is false, it would cause death. Simple as that.

For Controls, I assigned the following key mappings:

A - change color to red

Finally I added a score functionality and 5 lives to start with. 5 color mismatches and you're out!

After scoring 10, i increased the player's speed and this added a bit more thrill to the game :)

At the end of Day One, here's what the game looks like: 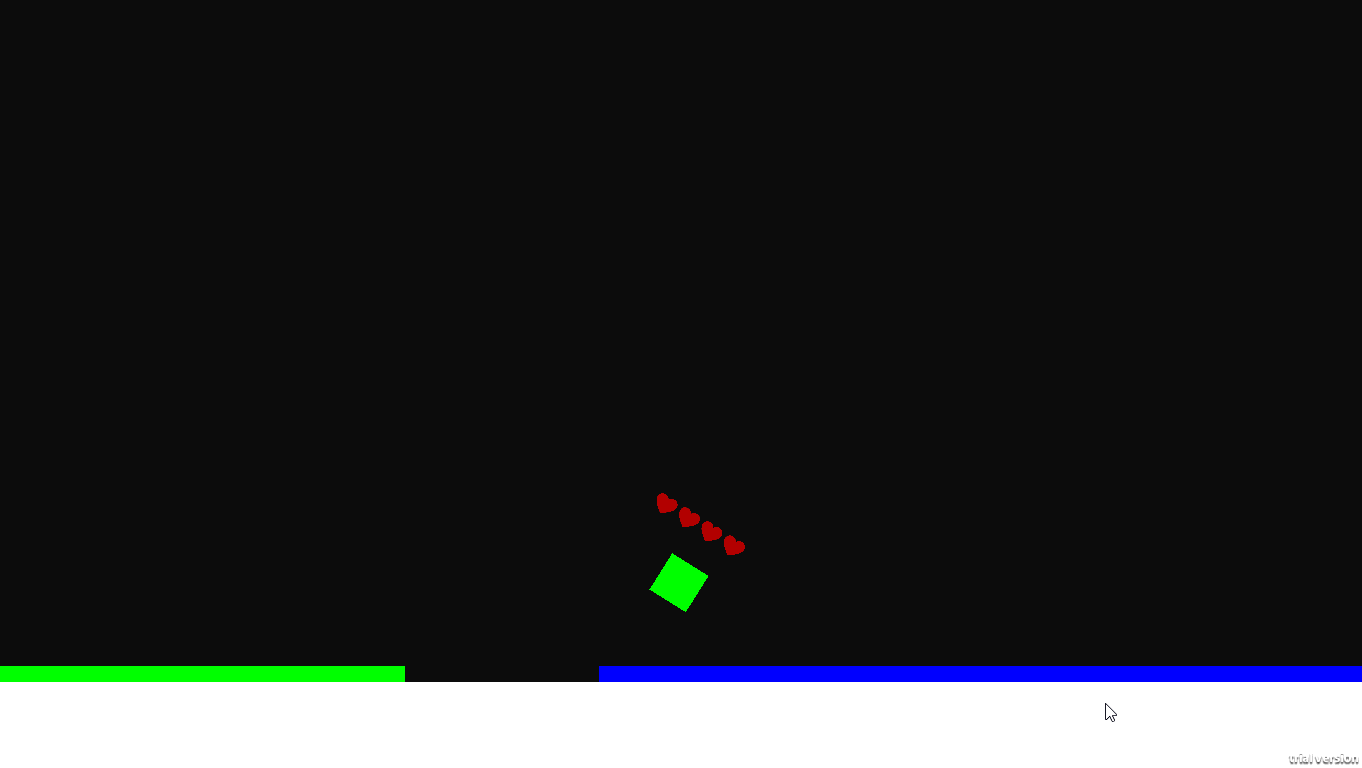 All in all it was a great experience and I'm really satisfied with what I made in my first day. I will keep this DevLog updated as I go along.

Thanks everyone! Feedbacks highly appreciated.

Also, does anyone know how to get rid of the "Trial Version" at the bottom right? I'm using Unity Personal. Didn't have this before but after I updated to the recent version, it started showing up.