Is the difficulty okay for you? Does it make you want to play the game more or less?

It was a blast. My first gamejam, my first game made with GM. I learned a lot (and surprised myself how much I've already learned). I know there's a ton of stuff I could have made better (like using scripts, states, arrays, that kind of stuff), but it works.

I think the game is ready. There might come some things to work on (like I managed to trigger the boss while the player was dead, which crashed the game), but that's QA departments job :P

I also managed to bug out the particle system, which turned out to increase the frame rate a lot. So I dropped the smoke trail from the bullets and left the tire trails. Those bullets looked like tadpoles anyway.

Now there's a screen shake for collisions, bullet hits and shooting. It was a lot easier to do than I thought (view_angle ftw). I also grabbed a simple chiptune from http://opengameart.org (CG Ram by Chasersgaming) and have to admit, it really fits the game and makes it so much better. Inspired by that I started working on some sound effects and bullet fragments to indicate a hit, and the The Crossing starts to come out pretty well.

And after the boss fight, I think that the game play is done.

Now it's just some fine tuning, sounds and main menu.

Today I started working on the boss. I kinda like the look on it. That and the trike look a lot like the units from the good old Dune 2. I just couldn't get the turret working as I wanted, have to do that tomorrow. Saturday evening just isn't the best time to work on the code.

I tweaked the item spawning; now the nuke has a lot smaller chance to drop. Also fixed the trucks, their pattern was pretty predictable.

Looks good! I had exactly the same idea for the boss to appear after certain number of kills!

Personally, I don't think that knights and doublejump go together, but I really like the art style. And the second stage (skeletons on the moon!) had some awesome tunes! Unfortunately I got stuck on a bad respawn point, which made me drop to death on a loop.

Thanks for the feedback, folks!

Yesterday, as I was preparing lunch, I had an idea: "I should make a nuke." So I made a nuke.

(it's powerful enought to crash the game :s)

Making that thing move was more difficult than I expected. Now it seems too easy for an enemy. Maybe it should shoot even more bullets (goodbye fps).

That's for this week, seven days down.

I still have to make the boss fight, sounds, maybe a soundtrack, special effects and some tweaking. Oh, and the cheat code, for debugging of course.w

Onwards, said a grandma in the snow!

I'm starting to run out of ideas, which might be a good thing. I'm thinking of making one more enemy and the boss, one weapon and a shield, then it's some sounds and maybe music. Menu screen and a Game Over screen shouldn't take long.

Friend showed me a video about 'Juicing' a video game. That gave me some ideas to implement, but those should be left at the end.

Thanks! I try to put out a working version on the weekend. Maybe it's even ready by then!

Thanks for the feedback! The art assets shouldn't be that high on my to-do list, but I still end up spending a lot of time pushing sprites. Luckily I've managed to work on the gameplay too.

I added multiple spawning enemies, variations on the boulders, power ups and a simple GUI element. I did learn something too; irandom_range and random_range are slightly different functions, and irandom_range(-1,1) also includes the value 0. Invisible boulders were a bit too hardcore obstacles.

It actually starts to feel like a game. I guess it's already more complex than Asteroids...

I'm really liking GameMaker. So far, if I have and idea, I've managed to test it and get it working in under an hour. With Unreal it would take days (mostly because of bad and/or obsolete documentation).

Next, respawing and lives. More enemies. More guns. A shield? Maybe. Cheers mates, have a good one.

I managed to make a crude AI system for the Enemy Bike.

That'll do for tonight.

A devlog? Why not!

So I'm working on Crossing the Eastern Desert to the Lands of Mnar... damn, I picked a monster of name. I should just call it CEDLoM for now.

Anyway, it's a simple bullet hell shooter, with Mad Max-y cars and bikes driving around a desert and shooting at each other. Not very plot-heavy, I should say. I'm doing it with Gamemaker: Studio, which seems to be quite easy engine to learn after fighting with UE4 and Unity for few years. Sprites are made with Pyxel Edit, because it's awesome.

So far I've made: 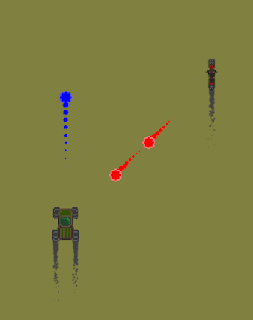 I should make boulders look more random. That should be easy with just more sprites and changing the orientation.

Also a spawner for the bikes: After that it's time to make more difficult enemies and powerups, like shotguns, rapid fire, and a shield. Maybe some sort of BFG. Also a bullet count and an alarm to slow down the current shooting.
Also respawning (and immunity after that), lives, scoring.

Cheers mates, have a good one. @whiskeycabinet