Seven Holy Places in the City
seedling
Miscellaneous mOnZteRs
seedling
Procedures to Discover the Path Ahead
seedling
How Hard Could It Be?
A crafting supplement for when you have no idea what you’re doing
seedling
What Remains on Copper Island
An HTML solo "tabletop" RPG
seedling
Delve Too Deep
A system-neutral fantasy one-shot adventure
seedling
Mürky bog
A pamplet dungeon compatible with MÖRK BORG
seedling
Map pack 1: Town, City and Forest
An assortment of maps for fantasy adventures
seedling
Don't Get Bogged Down
Maps, Monsters and Adventure Ideas
seedling
Wild Blackberry Jam
A community writing game
seedling
Overdue!
A system-agnostic game of intrigue where you’re just trying to retrieve a library book
seedling
A Dish Served Cold - Manorcrawl
seedling
Infiltrate the Lab
A one page map/zine for BOLT RPG
seedling
The Potluck
A Fantastical Zineventure of Queer Self-Actualization
seedling
The economics of my first month making TTRPG content
seedling
Converting Written Adventures from 5e to 13th age
seedling
A Gathering Storm - Iconic Edition
A game for 1st level characters compatible with the 13th age roleplaying game
seedling
A Spinner's Tale
"Sweet mother, I cannot weave..."
seedling
A Gathering Storm
An adventure for players of level 3-5 of 5e
seedling

When I'm drawing a map, I have a counter per space. I usually write it in pencil and erase after. That way, the world gets wilder as you travel farther from settlements.

Reply
Procedures to Discover the Path Ahead community · Posted in How to print out the book?
seedling92 days ago

If you print it double-sided, you can assemble it by stacking the pages on top of each other. So the first two pages printed double sided has the front, back, first and last page.  You then print the next two pages, and that gives you the second, third, 26th and 27th page.  And then the next two pages gives the fourth and fifth page, and fills in the back of the book at the same time. And as you add pages, you basically are filling in the book from each side, and the final pages are the middle pages of the book. So then, piled on top of each other, it makes a full booklet.

You can staple them together, or you can be fancy and stitch them together (you can google "bookbinding stitches" if you want to do that).

You probably also want to trim the pages, the booklet is smaller than letter sized so there will be a bit of waste on the side. Or I guess you can keep the extremely large margins and make notes or doodle in them or something.

Reply
Procedures to Discover the Path Ahead community · Posted in Any meaning behind dice color?
seedling127 days ago

Yeah, it's roughly that the black ones are the main tables and the white ones are secondary tables for adding more detail etc, like having two levels of bullet points

I made a map using this! 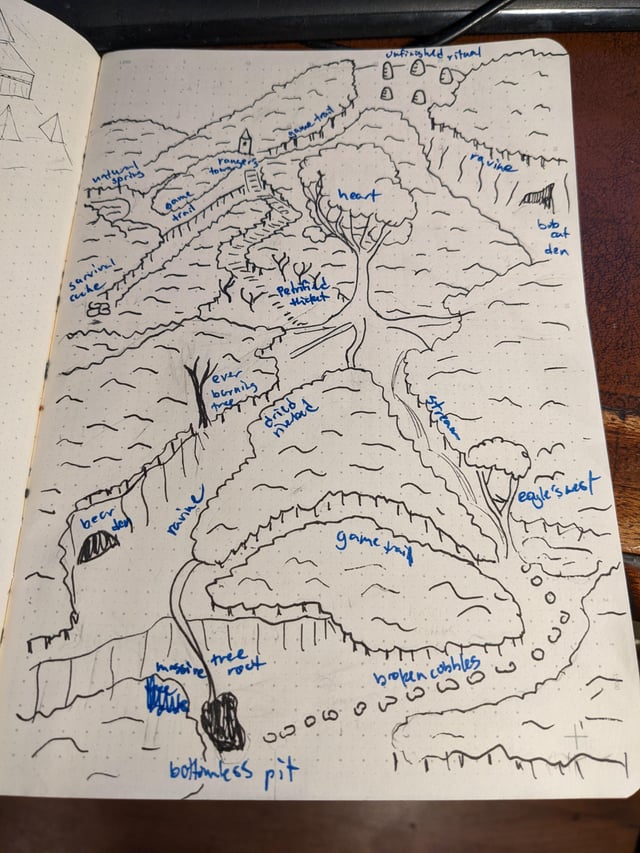 This is really cool! I'd love to buy a print version of it some day.

I'll say that they have fraught interfertility. Pregnancy is rare, but not dangerous, and seen as auspicious. Children vary from looking like slightly different fauns to slightly different Rusalka, but typically maintain the hairiness of Fauns, the skin colour of Rusalka, lose the hoofs, and swim well.

They continue to herd nautiluses, which now tend to roam less and stay closer to shore due to selective breeding. Hunting with obsidian remains common, particularly the aurochs, although a strategy of pinning them between the land and sea is now common. Obsidian is in fact incredibly plentiful due to nearby geothermal activity. Being now more sedentary, they have started some limited horticulture of seaside plants for food.

As mentioned, obsidian remains very important, as does nautilus shell. Fauns have adopted nautilus shell armour for land-based hunting and decorative and religious arts.  Basketry and rope-making ahve been invented, both using a type of seaside shrub and hair from the aurochs. Rough felt clothing and furs are used for special occasions (due to being ruined by the water); most clothing is either stiff leather (due to the water) or roughly woven plant matter. Horns are used for drinking and for decorative items, as well as needles.

Small boats have been developed, used mostly by Fauns.

Buildings are usually by the seaside. A raised base of stone, earth or sometimes wood piles is constructed, to keep them away from high tides, and semi-permanent wood and animal skin tents are built on top, which are robust to the common earthquakes. Rusalka primarily live on land with the Fauns.

- Main Auroch migration begins: As the weather gets cold, everyone starts spending more time on land, heated by geothermal activity, rather than in the cold ocean. At the same time, the numbers of aurochs increase and they start relying on the hunt. The first hunt of the season is a joyous occasion, dedicated to the gods of the shaking earth to ask them to supply a bountiful hunt and quell the shaking.

Full moon: It is known that the moon affects the tides, and thus it is believed to watch over the sea. On the full moon, people gather in boats at sea, decorated with nautilus shell chimes.

Generosity: Society is built on webs of mutual obligation, relying on different foods and resources with seasonal and ecological changes, and with catastrophe coming often. There are strict moral obligations on when you must give freely in times of strife, even to your enemies.

Ecology: the people of the land and the people of the sea; the aurochs and the nautilus; these are all a part of a delicate system that ebbs and flows with the tide. When disaster strikes - earthquakes in particular - it is because things are out of balance.

almost done the material culture post, just a few things to finish in the morning

The crystal patterns only move on geologic time scales, but the rocks do slowly drift.

Duende - originated in the northern islands, with the first settlement around F2, which legend has it was once connected to the mainland. They subsisted mostly from fishing and gathering shellfish and other small creatures in the caves, supplemented with seaweed and gathering the limited edible plants that live on the top of the islands, but they did not hunt the animals that live there.   Abandoned sites are almost entirely inside caves - the most notable one was decorated with subtle carvings that cast geometric shadows when lit by firelight. Elaborate baskets - apparently for fishing - have been found in the caves. Driftwood seems to have been prized, as it comes from shore, and where it survives, was elaborately decorated. Stone suitable for making tools also seems to have been rare, leading to there being few bladed weapons.

I'm thinking there might be an elevation change between 3 and 4, maybe more gradual than between 5 and 10, but still with 3 being a highland plateau. Maybe there's a mysterious row of rocks at the edge.

A smaller relative of the flying creatures in 2 is found in 3, or maybe they migrate there seasonally - when it's especially cold in 2, that's when you get some rain in 3.

I like the idea of 10 as being a weird isolated area, both by geography and by the deadly fungus lands. It would make being able to reach area 10 a big deal.

Mostly plants and animals are indifferent to it, since it doesn't directly act on them. In the dry season, larger rocks tend to move, slowly but subtly, which causes minor problems for burrowing creatures and for plants near them.  And the rains dampen this effect, as to the rare large patches of vegetation. In fact, it's possible that this effect would spread further if the environment were not conductive to it manifesting.

D6: Arid temperate shrubland, getting close to desert in the hot summers, in the rain shadow of several mountains. An important source of minerals, and also especially aligned with the magic of rocks. Many strange rocks can be found here with crystal patterns that are unique to this place.

I8: Cold peatland, almost constantly shrouded in fog. The peat bogs are full of life, being warmer than the surrounding area. A particular berry can only be found here which can cure most diseases and cause wounds and other injuries to heal at a remarkably fast rate - animals here are quite long-lived. Its leaves make a purple dye.

D6 (I assume D is going vertically? So that's the one between all the mountains?) Oops - that one is adjacent to another one but maybe that's ok?
I8

Glad you liked it! I actually never have worked in a library, some of it was inspired by my time in grad school and my general love of libraries, as well as a tendency to forget to return books on time, but that's it.

Oh I literally just opened up my notes, which I'd neglected for several weeks. I just need to "playtest" (roll some dice) and do layout, I am basically done. It's basically mechanics for crafting when you don't know what you're doing, which are likely to lead to interesting misadventures that need to be put right.

I've also separately, not for this jam, been working on combat-optional journey-generation mechanics, so I'm very curious to see the approach you take!

This is a really good game

It's good in ways that surprised me. I won't elaborate further to avoid spoilers, except to say that I never expected some good music recommendations?