I don't know if it's intentional or not, but I like how the choices are oriented GBR instead of RBG.


Noooo, not the anime glasses moment! NGL though, I really want to make this my profile picture on here. The "Uhm, actually" vibes are immaculate. Looking forward to and dreading finishing this update, because then I'll want more. 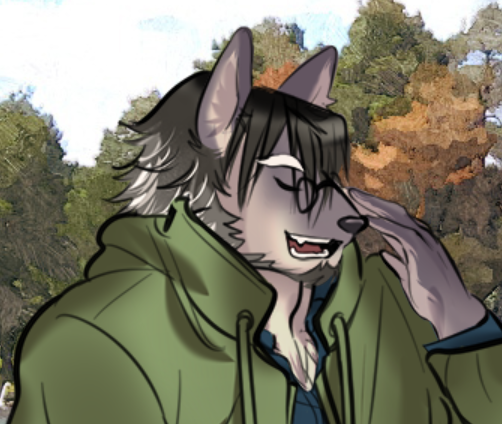 We all need a ManyMarco in our lives...cuddling is amazing.

I know Ben doesn't remember much of his nightmares/dreams, but he dreamed of Hernandez's death. He had a nightmare of being called to jump down to his death and then start floating down a river...... Not to mention the bridge scene from before. There were quite a few death messages from other characters too. I don't doubt that the suspicious person Zach saw may have had something to do with it (perhaps the white cream colored coat is a clue). However, since Zach heard the call, perhaps so did Hernandez and perhaps that's all it took. I know Chris looks sus with him having been held up, but I know he didn't do it. Since he apparently dreamt up Hernandez's speech, I'm surprised he didn't ask anyone if any of what he heard was true... Did she secretly join a group every year? Was that her favorite location? Was she on the board for its conservation? There was no way for him to have access to that information if it is true. I suppose that would just freak me out more, but at least I'd know I'm not entirely crazy, idk? My name is Ben, and I speak to the dead, or rather, they speak to me.

He's going back to the other game, so this one is on hold again for now.

I can't believe they didn't make us clean the toilets.

I have to say that I'm a little disappointed that Haruki didn't make the difference in the end (I know they switched him out, but still). It makes sense that this last minute breakthrough wasn't enough to make them in sync to win on a narrative level, but I was still holding my breath the whole time. What came after made it all worth it though.

Also this is sus:

I know this mod adds some races, is there a image pack that adds images for the added races?

Lesss goo! I hope you have a happy holiday season!

I mean, I could be wrong, but I believe that *SPOILER*


Remus and Abbet are actually brothers (It's been awhile, but I'm pretty sure this is implied when Remus talks about having a brother who went away).

This is going to be fun to try out for, thank you for the opportunity!

This fills me with fear.

I'm enjoying the story thus far! It's nice to see a story with some spice and variety in it.

Hope things are going well for you in this crazy world!

Finally getting a chance to read since the 0.4 update, and I'm loving it! Just wanted to report a minor typo here that I found while re-reading:

There's a c instead of a q in the word consequence in the last line.

The MC is quite literally listed on the front page, and has been for weeks.

Please sir, where might one go and find such a treasure as the Devil's Snare, even a hint would do wonders.

Does all the prep work help aid us in the actual boss fight? I know it's optional, but I am curious.

I got pulled in right from the start! It certainly was a novel experience being thrown straight into the action. The characters all have a bit of their own charm to them as well. I look forward to what future updates bring! I'm calling it rn though:

Bruce was totally the one carrying him back to his room (that whole scene was hilarious btw). The floor do be pretty comfie sometimes.

I look forward to seeing how you portray ADHD, as a fellow ADHDer! The forgetting of basic instructions or things that have just been said is awfully relatable, and I look forward to learning more about this metal himbo!

I love how you formatted these notes, fantastic work!

Does the skill- sin: Sense Guilt have a usage yet?

While being able to criticize things you enjoy is important, and I think you do a fine job of it here, would it not also be helpful to point out these grammatical errors?

Inspiring, keep it up!

I haven't played since April, and I noticed that the date and time are messed up, I imagine I need to start over to get rid of the errors?

The Lion, The Witch, and the audacity of this bish:

Tis all good, in the journal there's a star tab on the right of the screen. If you click on that you'll see your abilities, you'll then want to click them all out and re-enter them into the 3 you can have at a time. If you still need help lemme know.

Loving all the new stuff! I'm curious, has the permanent room at the tavern been added yet for purchase?

*slaps forehead* That makes so much sense, for some reason I only thought of removing the obstacle.

I tried but that didn't seem to tell me much, is there some sort of took we need to get to remove them?

NGL, the first MC character looks pretty sick (the reddish orange one), but if you were going for a hybrid, I can see why it doesn't fit. Your improvement is quite inspiring!