It has been almost 3 months since the production diary has been updated,  5 months for the itch.io development log, and a month since a dev has responded to a comment.  I have commented this before, in my review in for Hayato's route, but an 'official' monthly update would be nice, even if it is just "still continuing this project!" The long stretches of silence, dropping a new route, and then more silence after maybe a month or two of release is incredible unnerving. I understand delays and having to focus on work and such, but I don't understand leaving everyone in the dark about what is happening. I enjoy this game and hope to see it finished one day, but until then, I would like to know the status of the game's progress.

(I apologize if this is a bit demanding or brash, but leaving fans in the dark about progress, paying fans at that, never seems to end well. I have waited almost three years for this game, and I'm willing to wait longer, but regular updates will make it more bearable for everyone.)

I've found the save file that it happened on and have played through a few times, but I can't seem to replicate what happened. I also tried with a new game, but I just stayed on Rafael's route. Sorry I couldn't be more help.

I selected Rafael's route but was somehow booted to Paris's route. I only noticed around the time that Braums is coached on how to use his adorableness as a weapon. Though I don't remember all the choices I made, I could try replaying and seeing if the same thing happens

1. Were you satisfied at the end of the route you played?

I was pretty satisfied with all of the endings. I ended up playing Rafael's route first and fell in love with everything this game is. I felt a bit disappointed that the only "bad end" was Paris's, though things did not go to great for Rafael in Braums's "bad end". Its a really weird thing, but I feel like a bad ending is suppose to be a consequence for being a dick or not understanding the situation and/or characters enough. I understand if I'm just being jerk about this, but its the only I found lacking in terms of the endings.

Rafeal trying to bond with the group was the greatest thing in the world. I also kinda liked the running gag of men confusing Braums for a woman and how everyone dealt with it. It could have been a very distasteful thing, but it was done nicely! I don't think I really had any part that I cringed at or wanted to skip or anything. Most things were playful enough or serious enough that the mood didn't seem off.

3. Favorite love interest/what made him your fav?

I love all of them but I think I'd have to pick Rafael. He was the first route I ended up playing and like. The fishing scene was so good. Made a lasting impression. Also I really like the hand thing that the Shika have, so that helps. Also his social awkwardness is kinda relatable and charming enough not to make it... awkward. Braums would be my second fave and Paris my third. Braums also has a kind of social awkwardness and he's really sweet? Like, I feel like he's the sweetest out of all of them. Paris is pretty much the embodiment of two very specific types I have, but the whole crush thing Reaver and Cubi Ash had hit very close to home. But Paris did have my favorite intimate scenes, with Rafael and Bramus just barely behind.

3. What made you decide to play the game?

I'm really pan and love a good visual novel.  Though seriously, I do enjoy the fact you can pick which gender you want to play as, as well as customize Ash. I've only seen customization in really only one other game and being able to pick your gender in a few. Plus the characters seem interesting.

4. Did you find any bugs/typos?

Other than the weird jump to Paris's route, not really.

Maybe add a pronoun option, separate from the body choice? //TODO: today is a good example of this, or even Hustle Cat. I'm nonbinary and use they/them, and while I don't mind have to play as guy or gal, its always nice to have the option to choose to be closer to who I am, when given the choice. I mean, most the time I see I have the option to be nonbinary in a game, I will play it, just for the chance to be myself. I've also straight up just played games because they have a canon nonbinary charater.

Also maybe adding skip button? I know you can hold down ctrl or press tab, but I forget sometimes, as I'm sure some people do.

6. Would you consider sharing the game page on Twitter to spread the word?

7. If I made a commercial game would you consider purchasing it?

Once I'm done with the whole game, I'll gladly answer the questions you pose for those who have finshed playing, but I've come across something... odd. I decided to play both of Rafael's and Braums's routes as a female Shika after I had played as a male Shika, just to see if there was much of any difference. I had selected Rafael's route, but I seemed to be recognized as a female Reaver on Paris's route. 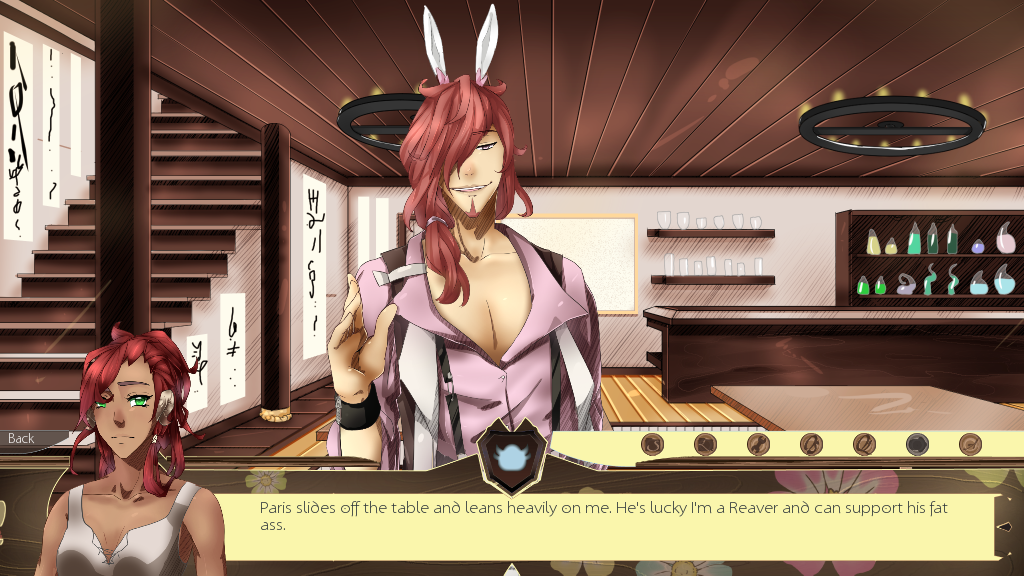 Also, did you use garageband to make the music? There is one part that just reminds me of Bastion and of the theme song of TAZ Dust, and they both used bandcamp for their music.

[Edit] Is there anyway to get higher than 5 points for Braums in the prologue? Because I can't seem to do anything to get it higher. A hint would be wonderful, if you could.

I'm not the devs, but uh. If you bought it back then, you should have it accredited on your account. If you didn't have an account when you bought it, it still should have been on your account, if you used the same email for signing up and buying the game. You should also be able to  go here, which gives a much better explanation than I have, to recover your purchase or to find out what the problem is. Hope this helps!

I finished all of Hayato's route and the common route, up to where it branches off for the other! It was enjoyable and I found very few problems, but I'm going to get to before my more detailed opinion on the game.

Starting off, the only thing that really stood out during Hayato's route was Bad End 1. I had MC's name set to something different from Nara, but after MC faints, Hayato refers to her as Nara. In the common route, while paying more attention to Shuye and Haiyue, there are a few instances of repeated text, as if someone was changed text but forgot to delete what was there before. The part that was most memorable was when Shuye and Haiyue are explaining why they are there. Other than those, I didn't find many problems.

[Spoiler warning, just in case] I found Hayato's route a great balance between serious and lighthearted. The one thing I truly distressed over was the Spring Scene™, as I've been calling it these past few days. Its an important-ish scene, but oh boy, I get secondhand embarrassment really bad, so bad in this situation that I dreaded playing the game again. I sincerely hope that I only have to encounter such embarrassment again when playing Mikio's route, but of course, you're the creators, and I'll play whatever it is you put out. Besides that, the humor was good as well as the pacing, and the understanding that develops between Hayato and MC during the good ends and normal end seems realistic to me. Also that glimpse of Mikio during Bad End 2 was... interesting to say the least. I look forward to the release of his route.

I doubt I'll have much to add until the other routes are released, but I hope my review helps in some way.

(Also does the minigame really affect the story? I got a perfect run on it the first time around, so I didn't bother to redo it. Also it was cool seeing Auralee in it! But I haven't' a clue who the Smooth Gentleman and Elegant Soldier are, sadly.)

I'm happy there has been some progress! I bought the game maybe a little over two years ago, and I'm truly happy to see an update on the game and creators, as well Hayato's route. I believe I'm half way through, on my first playthrough. But where I'm at, its 1 am, so I'm gonna probably sleep soon. I look forward to the rest of the game! I'll be sure to write a review of Hayato's route as a reply to this comment once I'm done.

(Also to anyone who may ever decided to make any type of game, small updates with little new information are a million times better no updates. Take it from someone who has backed a handful of games, both on itch.io and kickstarter. Gives the people who have supported it in anyway a little peace of mind.)

Nice game, but there are a few spelling mistakes. Also, it seems I'm locked out of the neutral ends for both Vonn and Vern. I was able to get Viktor's, but no matter what I do, I just get the bad ends. I used the walkthrough for all of it, but I just kept getting the same bad endings no matter if I used the section for the neutral or bad ends. I assume their neutral endings are similar to Viktor's, but I do like to get every ending myself.

I'm barely into this game, but thank you for making Them/They pronouns an option. I only know of two other games that allow that (Hustle Cat and The Arcana, for anyone interested). As a nonbinary person, it makes me feel happy to be inclulded in things like a visual novel. Thank you!

So I just finished two playthroughs of this game and I can't wait for the next part! Honestly I was confused at the romantic and sexual preference, forgot about it, then played a second time, choosing the opposite of what I did the first time, and it made some sense. I do like how you incorporated the choices into the game. I look forward to the second part!