Yes, if it is novel, useful, and not publicly known. I waited until I submitted a provisional patent application for "A 3-D Game" before talking about it. It is in the category of utility method patent. There also needs to be at least one physical apparatus implementation of the patented method.

Yes, if it is novel, useful, and not publicly known. I waited until I submitted my provisional patent application before publicly talkng about it.

I invented as new connection game called Qua™ (patent pending). I prototyped the game board on a 3D printer as a 3x3x3 cube. You can see my project at:  https://quagamer.itch.io/qua. I would like to offer this game online and need someone to do the implementation. I want it to be easy for each of three players to join a game, get instructions on how to play, rotate the game board in three dimensions to see where to move/block opponents and make a tentative or committed play. I am a retired information architect and can write clear specifications for the game rules and play strategies for game bots to follow so that one player can play the game against two computer bot opponents.

I would like a partner who has done this kind of thing before. However, if you want to work on this as your first online, three-player, PvP game development project, let me know and make a proposal--I wiil consider it. Whoever I partner with will set their own development & testing schedule, online community feedback procedures, and will have major input on supplemental audio, video and graphical effects. If we do a kickstarter campaign,  the developer can set their own reward levels and pricing.

Regarding revenue sharing, it could be an agreed upon percentage (large) of everything listed for purchase on https://quagamer.itch.io/qua and all  kickstarter digital reward items up to a reasonably large $$ amount.  Project related expenses, if approved, will be reimbursed out of income received from qua game licensing/sales.

Please email me at woodypid@msn.com if interested in becoming a partner. Please LMK how you would like to be paid. I will consider any reasonable revenue sharing model. Please note I am actively seeking to license my game to a game manufacturer, at which point in time I would buy out your interest. My plan B is a kickstarter campaign.

The Qua game uses the word cells for places on the game board that can be filled-in with an identifying mark to make a connected chain between a player’s two assigned areas on the game board. For example, an NxNxN game board cube is composed of  1x1x1 cells.  Cells are either filled-in with one of three identifying marks, which are also called qua:  yellow circles, blue squares and white triangles, or are empty and available for game play.

Qua has a game play rule requiring players to play game play pieces distinguished by their qua identifying mark only in empty cells that connect two already filled-in cells containing their identifying mark, or one such cell and  one of their cube faces. The Qua 3D game board does not start out empty.  Stratergically located cells are initially filled-in with each players’ qua before the start of a game.  This avoids deadlocks and first player unstoppable wins.

An example Qua game board layout for an NxNxN cube is shown in Figure 1, below. The italicized numbers along the edges of the 1-8 parts of Figure 1 indicate the parallel game play layers in each of three orthogonal directions. Each layer of the Qua Cube game board is composed of  cells in the shape of 1x1x1 cubes, where each Qua Cube game board cube face is a layer of NxN cells, each cube edge is composed of N such cells in a straight line, and each cube corner is one such cell. Viewed in any one of the three orthogonal orientations, there are N parallel square layers of NxN cells.

Combining parts 2-8 in Figure 1 with part 1, where N=5, shows the visible qua filled-in cells for the 5x5x5 Qua Cube game board layout. Two alternating 5x5 layers parallel to cube faces in each orthogonal direction contain nine filled-in cells: four at the corners, four in the middle of sides and one at the center of these two 5x5 layers, where filled-in cells on each layer contain the qua associated with the corresponding parallel cube faces. For the 5x5x5 Qua Cube game board, 54 cells (2x9=18 cells for each qua) are initially filled-in and 71 cells are empty and available for game play.

Using parts 2-8 for N=7 in Figure 1 to add two additional layers in all three orthogonal directions shows the visible filled-in cells for the 7x7x7 Qua Cube game board layout. Three alternating 7x7 layers parallel to cube faces in each orthogonal direction contain sixteen filled-in cells separated from each other by one empty cell and arranged as 4x4 squares, where filled-in cells on each layer contain the qua associated with the corresponding parallel cube faces. For the 7x7x7 Qua Cube game board, 144 cells (3x16=48 cells for each qua) are initially filled-in and 199 cells are empty and available for game play.

Here is the link to this project: https://quagamer.itch.io/qua. 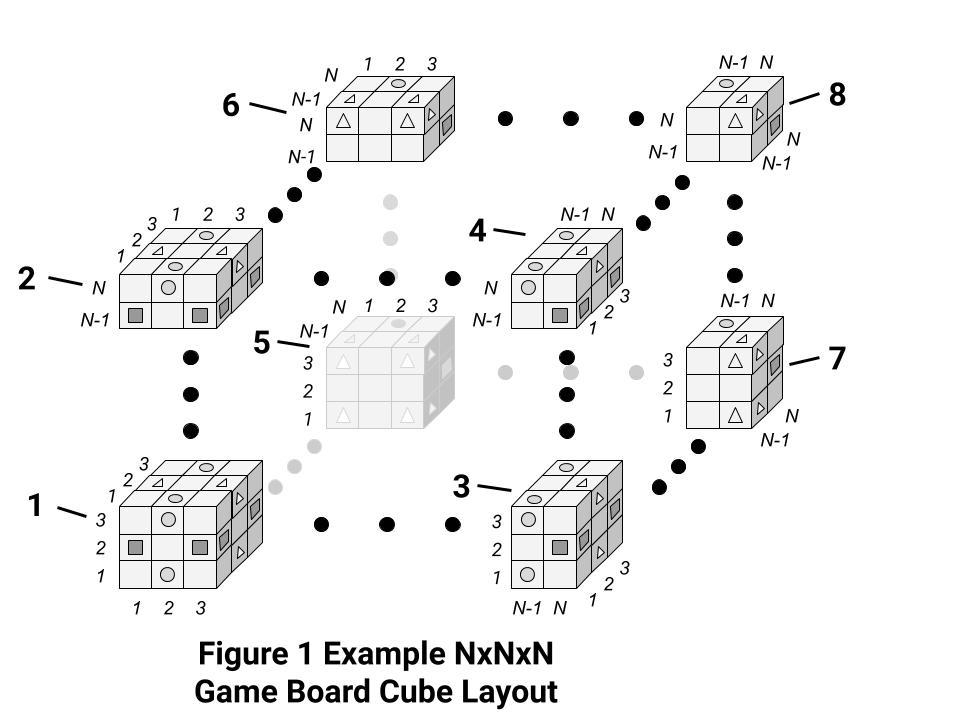