Hello, thank you for your message. Yes Hearts of Iron is definitively an inspiration for this game :)

The development is still going on, and it's time for me to introduce a new gameplay concept of Z Collapse. This one is so important that it will define your whole strategy : the resources management !

As the zombie invasion is in full swing, human governements will have to fall back, shelter their population as much as possible, and hold firm while waiting better days. In this context, states strategical resources stocks will be primordial to ensure your population survival, building constructions, and armed forces upkeeping.

There are 5 strategical resources in Z Collapse :

-The Production : This is a generic resource that represents all materials and mechanic tools coming from the industrial world. This resources can be produced in dedicated factories. It is mainly used to build new structures, and producing new troops. 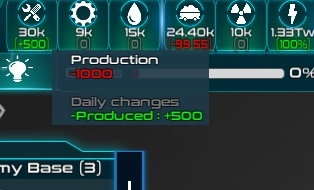 -High Tech : Those are complexes industrial pieces, coming from material and crafting from different location in the world. they are essential in producing tanks and helicopters. As they can only be produced in a globalized-type of World, it's not anymore possible to create them when global trade is disturbed by a zombie invasion. Therefore, human nations will only rely on the initial existing stock of high tech pieces. If you are in shortage, maybe you can take some from your neighbours ? ...

-Oil : The black gold is of crucial as you can imagine. When you are in shortage, your motorized troops won't be able to move anymore, as your boarded units as well. Oil can also be used by your power plants to create energy. It can be produced by oil wells, and off-shore.

-Coal and Uranium : Those two resources are extracted from mines. They can be used to produce electrical energy. This is very important as a good energy supply will allow your population to keep a relatively normal activity, and keep them under your control. If your population lacks energy, they will panic and progressively join bandits camps.

A power plant and its supplies options

All those resources can't be stacked as will. They need to be stored somewhere. Cities and refugees camps can have some, but the better option is to build some dedicated storages. It's useless to say that they will need to be watch with strong military forces, as they will attract greeds from everywhere...

It's also possible to loot your neighbours, or even wait for them to collapse, and take all what remains. It's all yours.

The project is progressing well, and it's now the time to reveal a first gameplay concept : the pandemic management

Zombies will first spread accross the world by using infestors. Those special units are cloaked and hard to detect. They will try to reach a city close to them, to initiate the pandemic oubreak. At this point, human nations can deploy some troops to try to detect and eliminate them before they reach the cities. 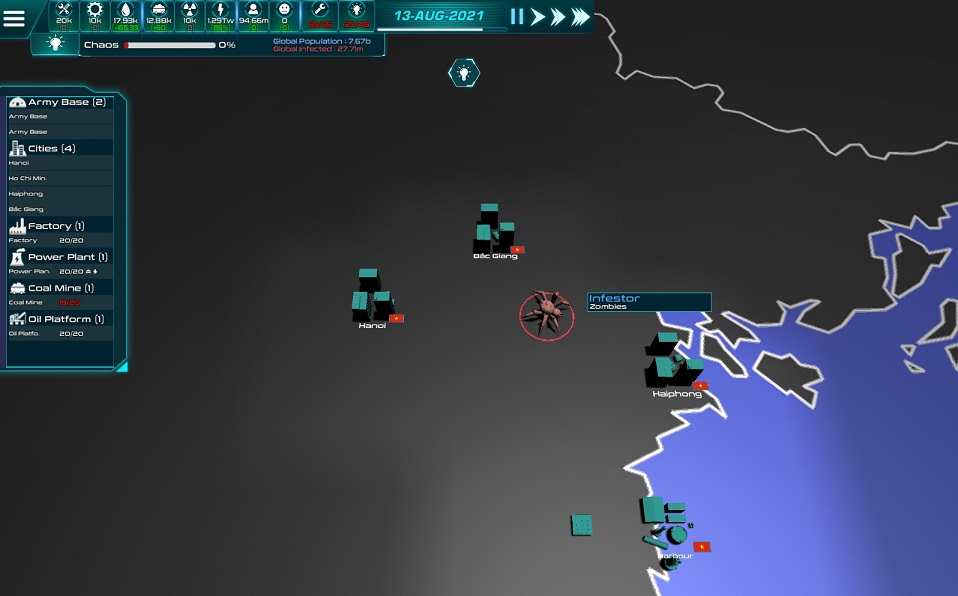 An infestor as a target in sight

However, if an infestor reach the city, it will earn a infestation point. Zombies will now begin to proliferate, and decimate the local population. Thus, the city population will daily take casulaties, that are proportional to the infestation level. Contaminated humans will then reinforce the regional zombies forces, allowing them to create hordes, and buying new infestors...

Even worse, The city infestation will increase more in more automatically during time. It represents the disease outbreak growing faster and faster. And this is made proportionnally to the amount of population in the city. 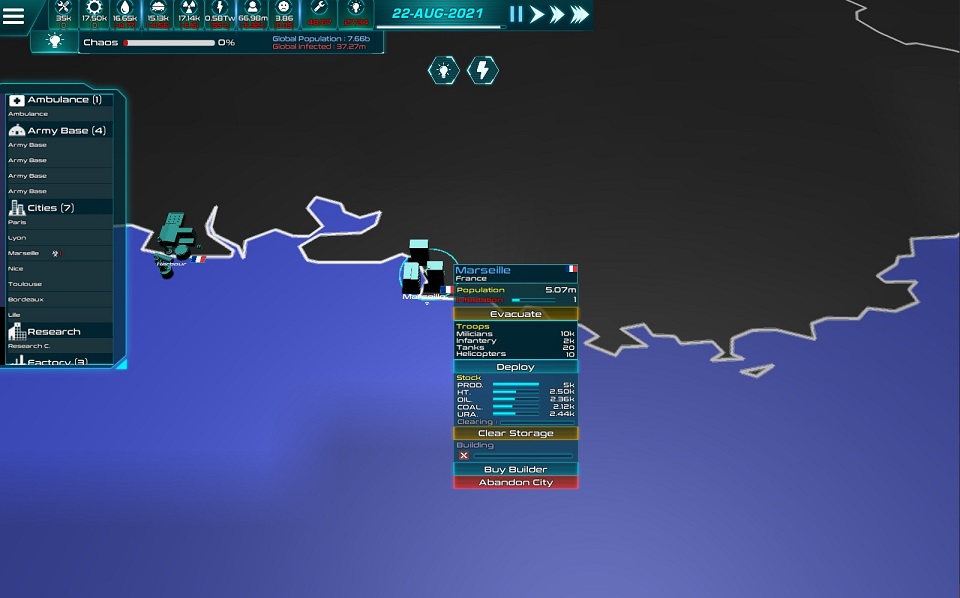 The infestation is growing in Marseille

So the player is now in a vicious circle, with a ever-growing infetation. In this case, what are the options to keep control over the situation ?

-The player can buy some ambulances and send them in impacted places. They will allow to reduce the infestation level. This is a first measure that will allow you to gain some precious amount of time. 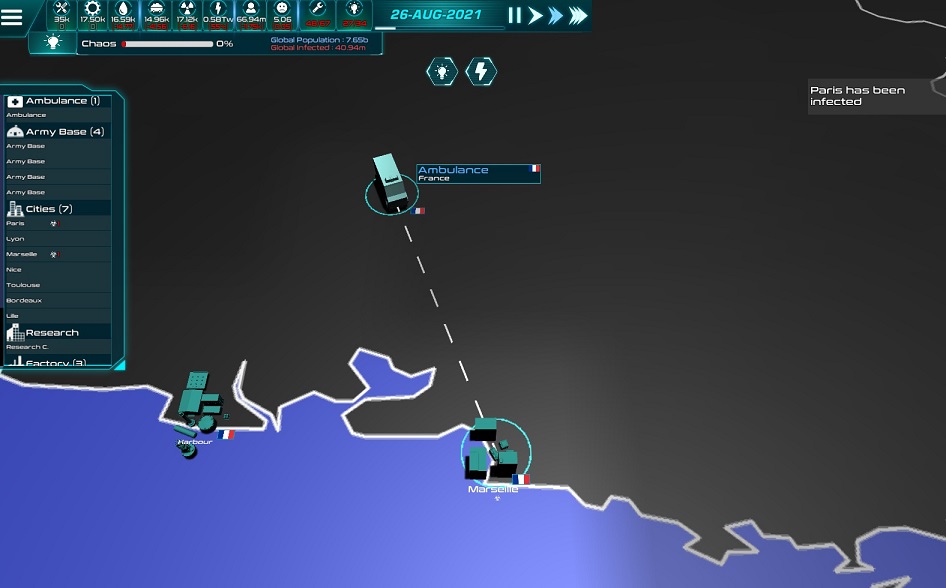 An ambulance is arriving to relieve the population

-The other solution is to evacuate the cities population, and regroup them inside refugees camps that you previously built. Those refugees camps are indeed very less exposed to the infestation growth. Because it is easier to keep an eye on the population parked there.

With time going on, the player will also unlock new technologies that will allow to limit the disease progression, and to improve the ambulance efficiency.

Hello thank you for your message ! Indeed the core gameplay is well advanced. However there is still so many things to do... :)

I will create a page on Itch on a later development stage.

I would like to introduce the game I am working on : Z Collapse

It's a real-time Grand Strategy game, that simulates a zombies global invasion. (the screenshots below are of course WIP !)

Most of zombies fictions set the lights on surviving groups, in a post-collapsed society state. Z Collapse is instead focused on the beginning of the pandemic : Where the first infected are appearing, leading to the invasion of the World.

For the game development, I'm freely inspired by the World War Z novel, from Max Brooks, that treats specifically this subject : the way that Humanity would react to that situation, on a global perspective.

In Z Collapse, you can so play a country amongs 170 availables. Your only goal is to ensure that your government will survive, and to prevent your coutnry from collapsing by the chaos generated by the pandemic. 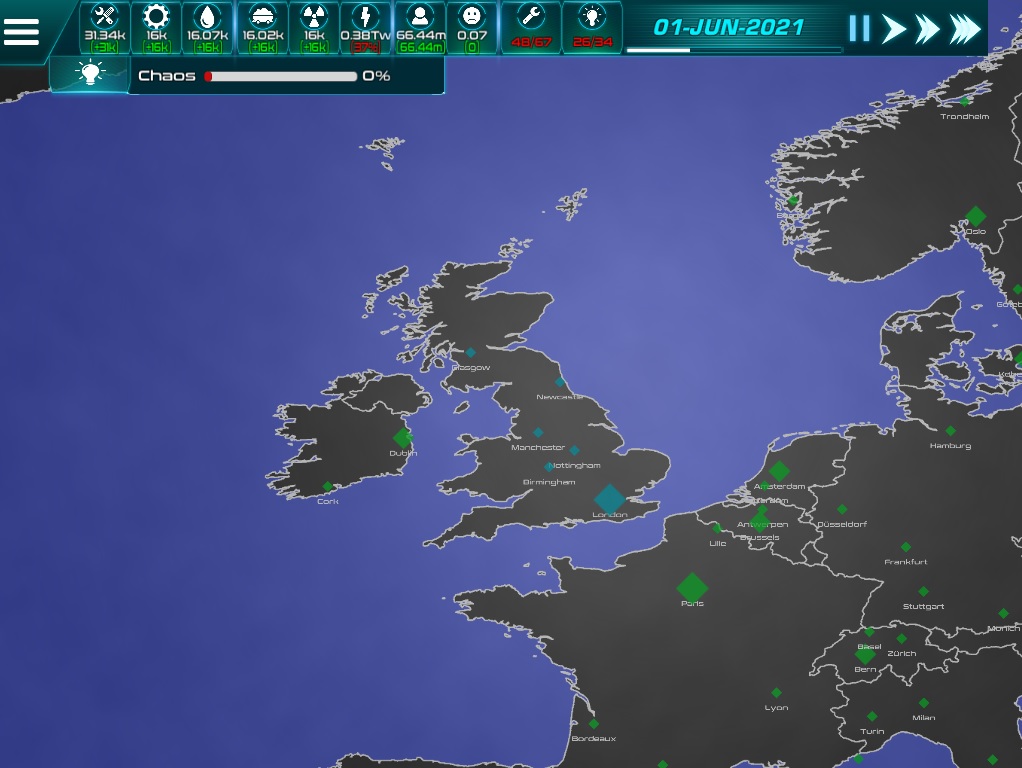 My aim for this project is to propose a new gameplay dynamic on this kind of game. In most of strategy games, the player starts with a low power, and then is gaining more and more strength, to become unstoppable at the end. Here it's different, the player begins with his full power, but must spend the early-game by preventing the erosion of his strength, caused by the initial outbreak. Then, after having entrenched, collected resources, and discovered technologies, the player will be able to retake the upper hand. 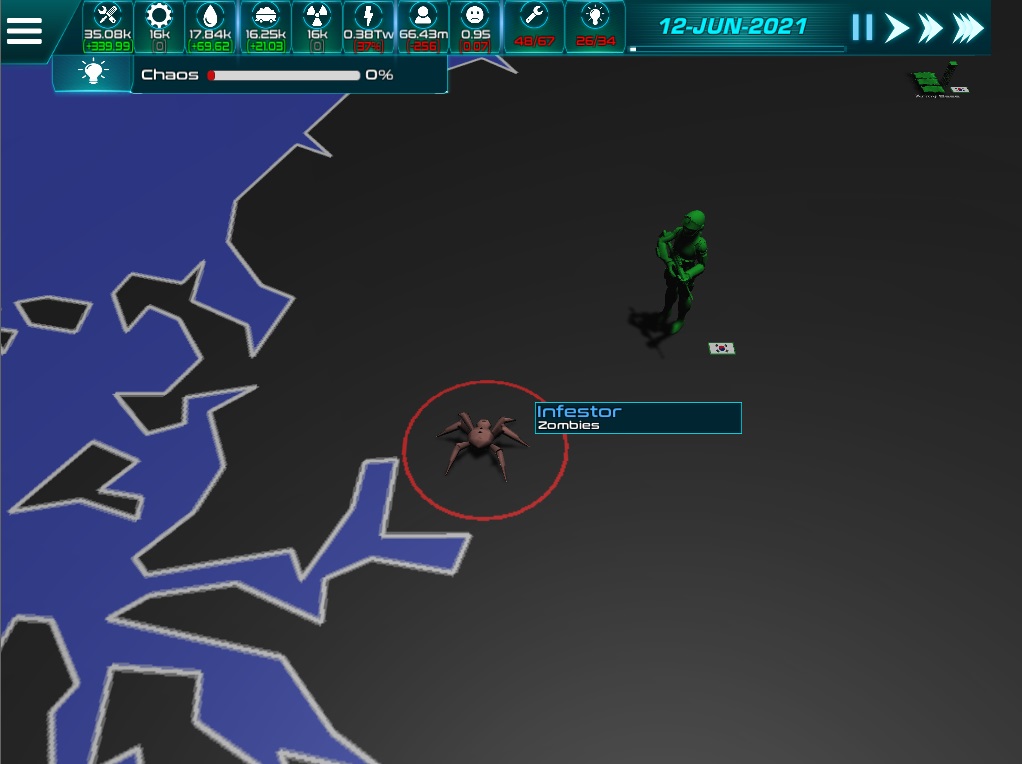 South korean special forces are trying to catch the infestors, responsible for the early outbreaks

In this game, we are in a situation where nowadays geopolitical balances of power are completely changed by this pandemic. Indeed, against zombies, all the modern and complex military arsenal is useless (it is also very well approached in World War Z). The keys for victory resides here in the huge manpower, and the amount of resources available. In that configuration, the easy countries to play won't be especially those that are expected to be! 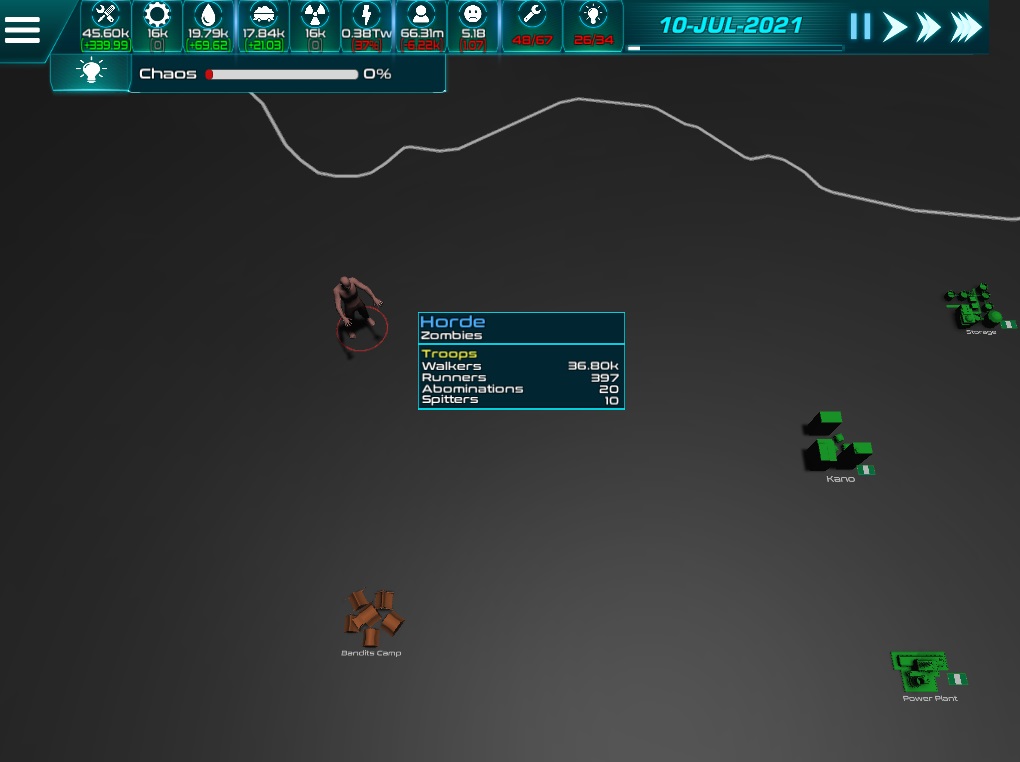 A zombie horde was formed in Nigeria, just like everywhere else around the world ! 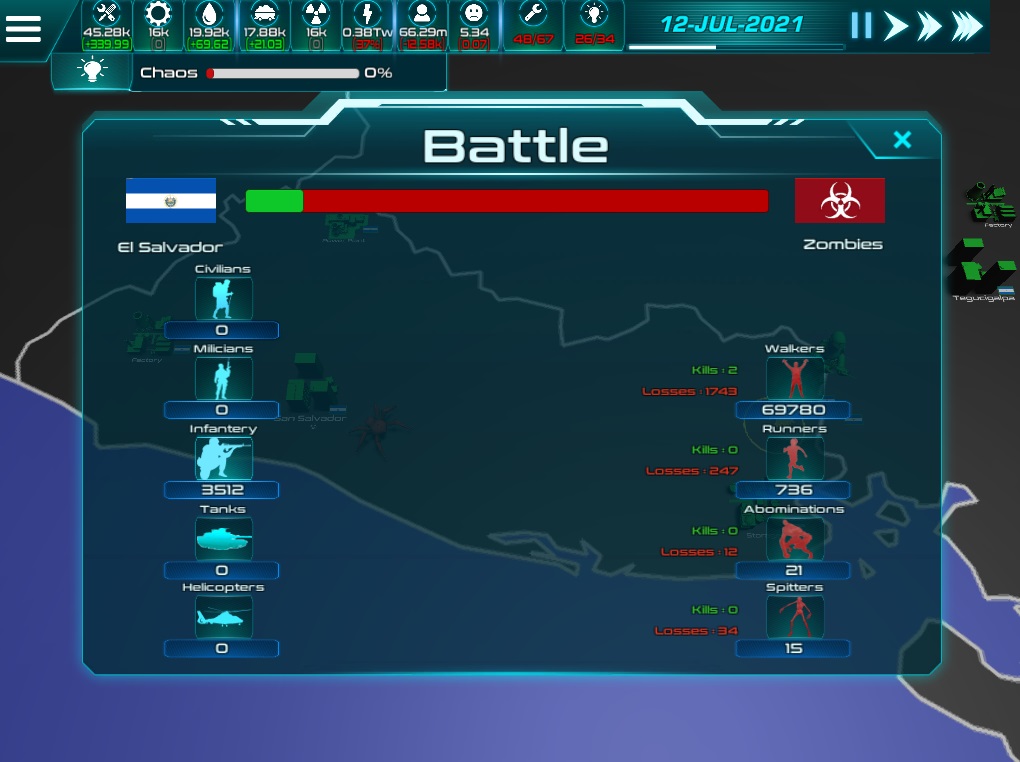 A zombie horde is attacking a military base in El Salvador

Regarding the resources, they will be of a crucial importance. They will allow on one hand to produce new troops, but also to produce energy, to keep your population under control. In case of shortages, panic will spread progressively, and your brave peoples will join bandits groups. They will become a thorn in your side, because in order to survive, they will attack the state installations. 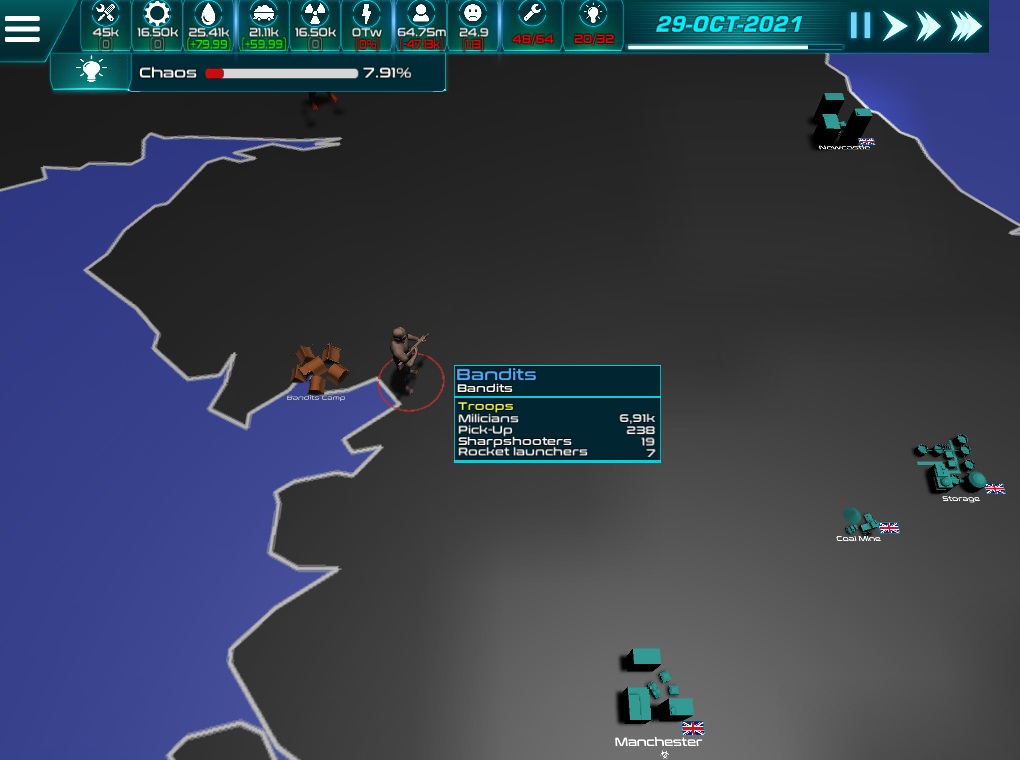 A bandit group is scavenging for resources to loot 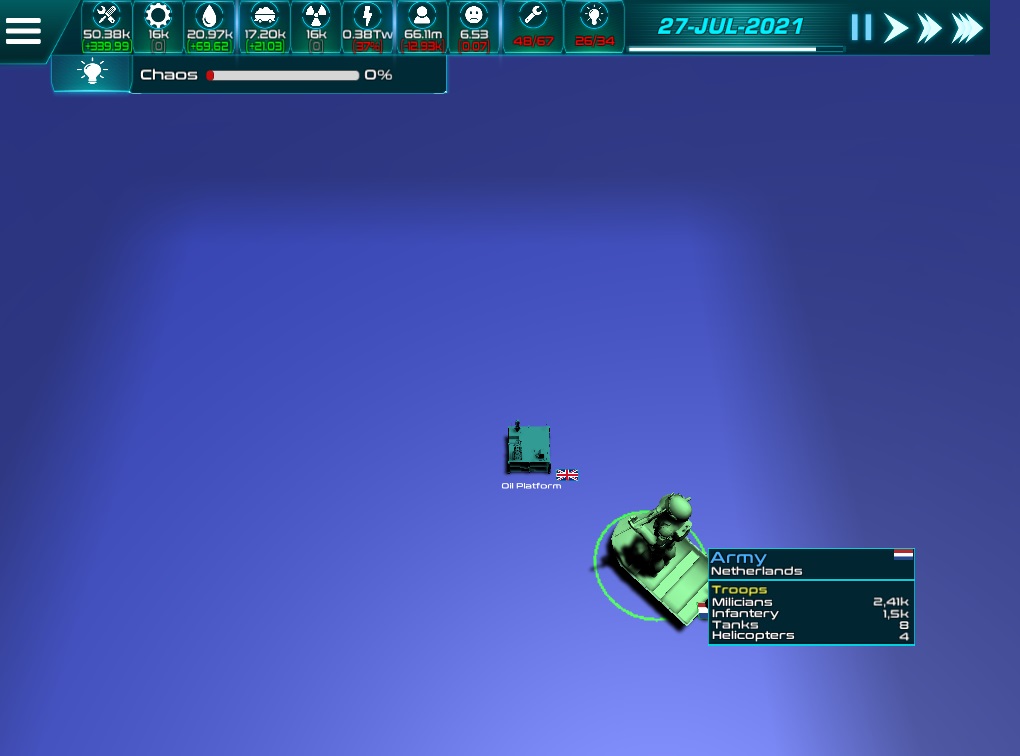 Desperate to don't have access to any oil anymore, a dutch expedition is launched against a refinery in the northern Sea

The game also includes the refugees management. They can be welcomed, or chased away. Of course, having a strong population in that situation is a solid advantage. But if you don't have enough resources for them, you can regret it... 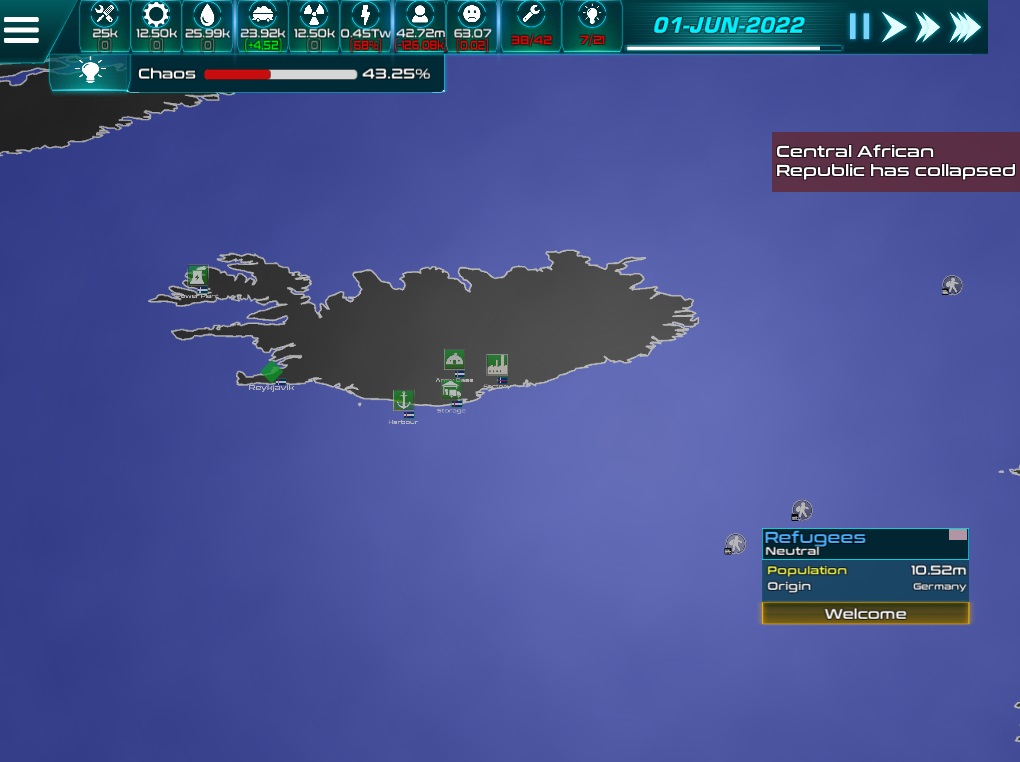 The Iceland thought they would be safe... until millions of refugees desperatly try to reach it. With some of them infected by the virus

I will post here the advancement details, and more introduction about the game features. They will also be available on Twitter https://twitter.com/PokAndCo

Tired of all those zombie games where you kill walkers by millions ? Me too ! But in Zombie Commander, you are leading the apocalypse !

Zombie Commander is a strategy game about bringing the extinction of Humanity. Your goal is to spread a virus infestation across the United States. Then form massive non-living hordes to invade cities, destroy the human armies, hunt refugees, and bring the civilization to its end.

-Spread the infestation across the country

-Create your hordes with 7 kind of zombies. Each having its own strengths and weaknesses

-Prevent medical teams to find a cure for the virus

-Full US map with dying lights in infested areas

-AI progressive reaction to the virus. Up to 5 phases leading to nuclear blasts