WOAH! Thank you for playing all the games! Your comments are on point, many things you said I had not thought about!
We'll definitely improve on player introduction for next games.

Thanks for all your kind words and time! 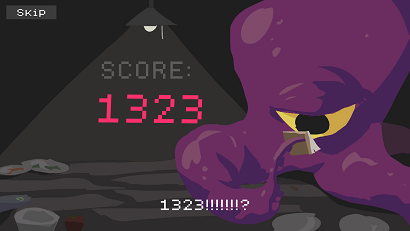 It is pretty hard pal!

Glad you liked it! It does have a difficult introduction, we'll work on that chief!

Thanks COOL jake B)

Your game was amazing bb, keep it up.

The stats have some flexibility, about 20% deviation :)

WE GO IN DEEP, WE ADD TANK

Thanks! I think we had similar approaches, enjoyed yours too :)

Glad you liked it :)
Yeah we change between grabbing items with raycasts and cutting items with physics so it's a bit confusing, will keep notes for the future! Thanks for the feedback!

Woah thank you! It definitely has the chaotic VR game vibes :)

Simple and looks very pretty, I love space and I like this a lot :)

I'm in love with the visuals and character design, the flying mouth is a just great.

Yeah, it was nice beating it :)

Really enjoyed it, at first I thought all enemies were similar but after playing a while I noticed how drastically different they are from each other just by their changes in movement and attack speed. This is the priority list I came up with:

Bees start weak but when later enemies join, they fill the playing field with slow moving bullets that you have to dodge. Their weakness is nullified by the other monsters, and that is sweet balance :)

It's crazy how complicated the strategies can get by just changing some speed parameters and cooldowns, you guys gave it DEPTH without creating new crazy attacks or systems, just using existing ones and tweaking, really like that!

Would love to see a game like this polished, maybe audio cues before enemies spawn and also a more clear background that makes enemies and bullets not blend together. Other than that great game! 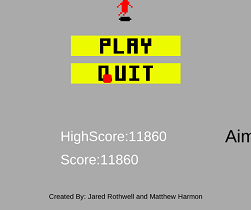 Very pretty, you could skip puzzles by jumping on a box and then on a wall though.

Completed it!
It's definitely a good rage game, had me wanting to quit a lot! The floaty controls are key part of the game, as frustrating as it is, but when I had trouble even getting to the main sections of the map because of the floaty controls I think it got too frustrating, easing that a bit I think could keep player engagement. In areas like this for example, having solid ground where you don't slide in, since they are not really the main platforming section, what the player wants to do after falling is to try again, and if you can ease their re-entry to the stage you can reduce that extra frustration.

Thank you, glad you enjoyed the game!

Thank you! Couldn't have done it without my team :)

WOAH! Thank you for playing Ishihara :)

The game didn't have very great design choices so it was easy to get stuck, the puzzle was about 3 colored buttons and a 5 button combination,  the light flashed with the combination, which to know, you needed to change the colors you could see. It was really complicated and I didn't have a smooth learning curve so my bad, anyways thank you for playing it!

It's up now!
Can now be played in browser :)

Enjoyed it! Player moved really fast but the fact that my colors stayed where I left them and that the respawn was quick made it kinda fun to go crazy with the speed. There also seem to be many ways to solve a level when you get many colors so it feels like there's a lot to explore with the mechanics, would be fun to see big levels :)

This is probably my favorite game in the entire jam, glad I found it, 5 stars all around.

Had a great time, art is really pretty and mechanics are fun. Great job!

Really nice! I really like how the music gets more urgent as the time runs out, makes you want to act fast.

It was really helpful to watch you play the game and point out your experience. I got frustrated along with you lol, I will definitely use your feedback to improve future games, thank you Joshua :)!

Visuals are really nice :), I like that I have to jump off the edge to go to the next level instead of a UI button or something like that. Fun game.