While it is easy to identify an engineer unit when playing as the USA, I have a hard time actually understanding which of the Finnish or German units are actually engineers. Is there any way to quickly find this information?

Instead of wasting a turn entering a river and then leaving the next turn, Bruckenpioniere can help you automatically pass through it.

Reply
Panzer Marshal community · Posted in May I contribute with new campaigns?
Phantoxic346 days ago

woahhhh. not creator, but I have to say it'll be a blast to see further development within campaigns for this game. I think that was one of the main problems the creator was facing.

To all possible future readers, the Bruckenpioniere isn't meant to pass impassible rivers. It is meant to hasten up the speed of which you are able to cross. Works extremely well, would recommend.

A lot bigger up top too. Idk why it didn't allow me to send any more troops in tho. 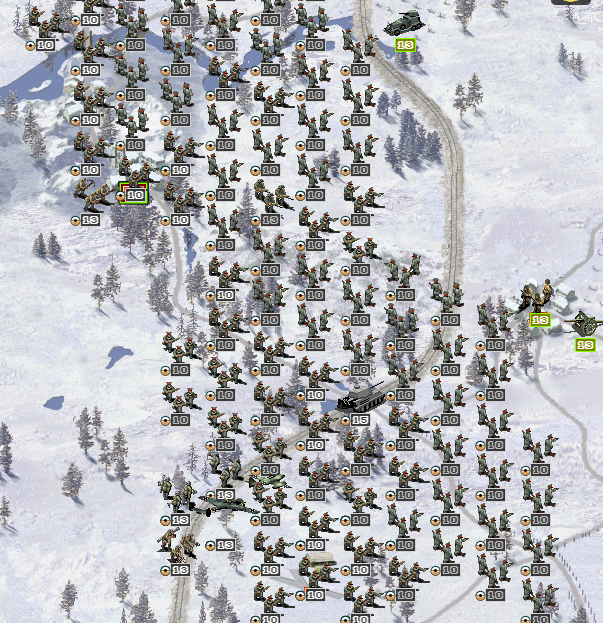 Was it updated just now? I'm playing on browser rn and I still have some 20 hp tanks.

A year ago but I'll still reply. Imo main thing rn that's helping me push through is OP tanks and just rushing to the objectives during hard levels.

OP tanks are extremely key. This game allows you to get some 20 hp tanks that are absolutely brutal. Especially with the "overrun" ability, they are able to take out 5 troops by themselves. During the Novogrod scenario, I got absolutely destroyed the first time through because of the sheer number of troops. I reset myself to Barbossa (or the one before Novogrod, I forgot) and developed one 1000 prestige tank. Starting from the south side, I was able to clear out the majority of the troops with a single tank, as it could overrun everything. Had like 7 turns left over till end of the brilliant victory timestamp.

Second thing is of course, objectives. There are some scenarios that you really just can't beat if you go for all of the mini objectives. Take a few fast moving troops and just rush to the objectives. You can kill off all your auxiliary units, you can be surrounded by enemy troops on all sides at the end, but a victory is a victory lol.

Reply
Panzer Marshal community · Created a new topic Are all of the commander abilities actually possible?
Phantoxic1 year ago

Hey Nicu! Thanks so much for your responses. Haven't replied but I've read all of em.

This time around, I noticed that on the user manual guide there lists a lot of random abilities. However, I have yet to get many of them despite many times trying. I've even set up a save file so I can just get it again and again.

Is it really possible to get all of the random commander abilities? Are they just really rare?

Reply
Panzer Marshal community · Posted in Do I lose prestige if I have a brilliant victory before the deadline?
Phantoxic1 year ago

Ok this question is dumb af. Idrc about the answer to that one, but can someone fr answer this:

What German units are engineers? I've read that engineers are able to bypass fortifications and directly do damage. Is there any indicator as to which units these are? Idk German so everything's been tough.

Reply
Panzer Marshal community · Created a new topic Do I lose prestige if I have a brilliant victory before the deadline?
Phantoxic1 year ago

If I have 5 turns left before the deadline for the brilliant victory, and I go ahead and win it, do I potentially lose out on some prestige? Should I just station my troops around the last area and just camp it out till the last brilliant victory turn so I get the most amount of prestige?

Thanks so much. I think what I'm doing rn is actually the German World Campaign, but I'll make sure to check out the Russian Counter-Offensive.

Really sad because during the Mather scenario (I forgot the exact name, but it was with ships and the island), I put a few of my really overpowered core units into ships as well, and although I managed to get the brilliant victory they were wiped out by the enemy ships.

How many total units do you suggest? I'm running around 18 or so with planes included. Not sure if I should have more because even in "easy" scenarios I'm outnumbered asf

Yea idk. From my experience the units only actually work with small rivers that you could normally cross on your own. Large ones that are impassible for normal units don't work for it either.

Just started playing the game and I absolutely love it. Went with the German Offensive after I got obliterated in the American one, and honestly it's just the right level of difficulty. Any other campaigns that are the same difficulty, or even easier?