I do have to say I was confused at the start, although it was mostly my fault.
I read that Z and X are used to control the game. I started the game, the first macro game came up and it said press B to cancle bloops evolution, so I pressed X, since I am used that X is cancle/menu for most indie games with that scheme and for RPGMaker games. I was confused, since I had assumed Z was A and X was B. before I realized that though, I realized that since I have a qwertz keyboard, I had to switch they keyboard scheme first.  after I figured out both things It got a lot better. It has great graphics and the games are fun macro games. With more games, and some things like a scoreboard this game will be quite good I'd say

Noticed that when trying to throw the same person multiple times. Since when there are 2 enemies in a level you have to grab the person, throw tehm, re-grab them and then you get the glitched screen. While when you have 4 enemies for example, you need to regrab them 3 times, or grab one and regrab them once, and grab and regrab a second enemies. Either way, one regrab equals one enemy in the level.

I'm no programmer, but from what I can see, everytime you pick up a thrown enemy after you threw them, it counts as another kill, and once you grabbed them as many times as there are enemies in a level, you get the glitched screen since the game counts it as you having enough kills to pass the level but there are still enemies alive so it fails you at the same time.

As far as I can see it still isn't fixed right? I still managed to encounter and figure out how ot do it. I managed to beat the entire game while leaving at least one enemy alive in every level

an even easier solution is to just go invisible and go between the 3 guys, grab one, throw him to the armored guy, which will break the glass under him and kill him, and the grab the other guy and throw them into the last person.

It seems like when you give the alraune the fancy rose, then check relationship status and then decline to surrender and then talk with her again and give her another rose, she will be stuck at curious and you can't progress the game.

I started the app for the first time 30 seconds ago and the music was at the highest setting, I turned it to 20% and it was still too loud, I had to turn my pc volume from 70 to 20 just so it's comfortable. I use RPG maker MV myself and I know it sucks to have the music at max volume, but please find a way to make it start either off or at 20% at least. I have a ringing in my ears now.

It seems like Cece or Eros overdraw even after they got a blackjack if you also have a blackjack. it seems a bit weird and probably a bug, or it could be a strange way of avoiding erorrs? Eitherway I think at somepoint a double blackjack should have some unique dialouge at least. Maybe making the one who hasn't a blackjack drink all 3 glasses. 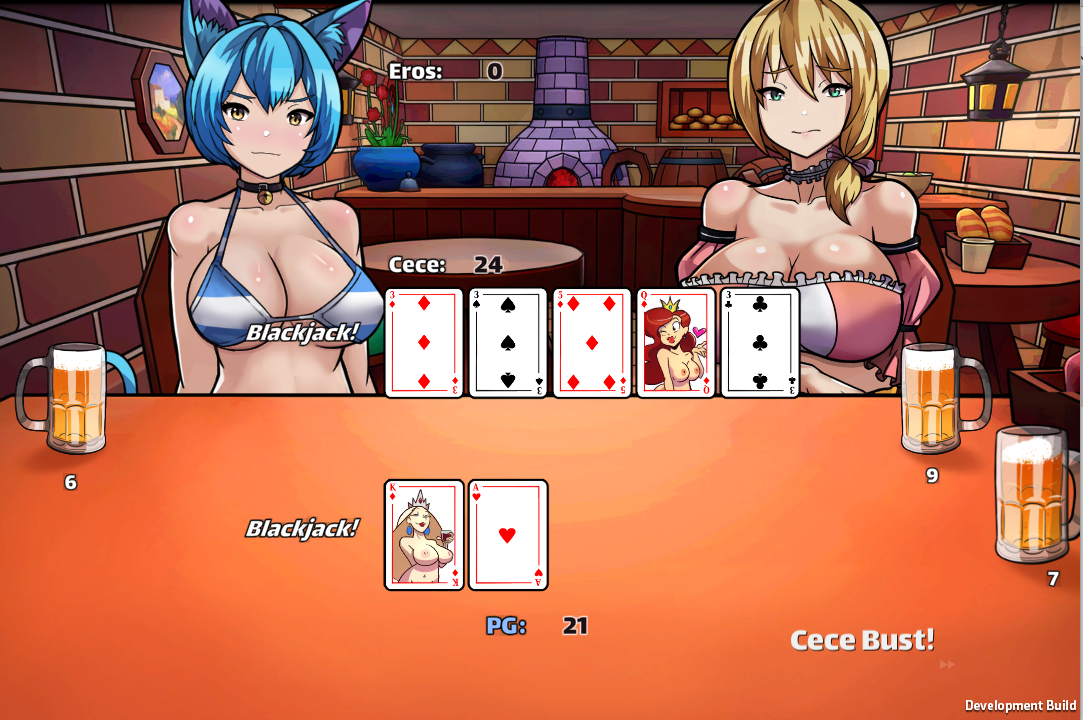 It appears randomly. For me after I was reading a document those jumpscare began. And when I finished and went out of the computer I saw a ghost on the couche looking at me. I continued walking around and the ghost appeared right in front of me everytime. At first I thought it was triggered by where I walked and when I looked in that direction, but then I noticed that it was just random and I was just lucky/unlucky

I have seen the gost like 4 times and once even right in my face. Afterwards I only heard the sound far in the distance

The art looks good. but the UI really needs an overhaul. A way to see your combat skill description to see what those skills do after you chose your class. Also the fact that all the shop keeper have so much text and scenariose that you have to go through before you can even shop there. I wanted to check out the forest on my first day and wanted to see if there are any healing items in the shops. I had to go through so much that at one point I just gave up and had to skip all the scenes just so I could finnally shop. The combat is still a bit clunky, especially since you can't check what the skills really do in or even outside of combat. I never had money problems and the sell slave option was thus kinda useless. The servant section seemed nice but it seems like the rules for them or even their stats and living conditions didn't matter yet. So overall it was an rather unenjoyable experience for me personally. I was happy to see some hypnosis content with the inn keeper. But even that was rather short and very basic. Some more choices would be nice.

yes to all of that besides platformer. Can't wait to check it out in the coming days after I go through my backlog. And yes Slime Girls are the best!

I think the game is alright so far. my main complaint would be the repetitiouse grinding for money and affection. especially when you have to work with someone 5 times and it's always the same with no variation just to get them 10 points. Also I am unsure if it was just me or if the game isn't that far yet, but I only ever gotten one chance to really makea difference with the second shoplady even where I had enough toughness for cunnilingus. I just unlocked the church but I don't think the gameplay changes pace so I think I will stop here for now.

I did like the characters for the most part, I hate the tsundere but that is just because I hate tsundere in general.

The dialouge in the game was enjoyable enough but it's not enough to carry the whole game.

I hope my feedback helps you and I do wish you best of luck on developing the game.