Aww, thank you, it's an absolute joy to read your comment, and I'm very grateful to you for taking the time to post it here.

Wonder-full! It seems apotheosis has been attained.

Still working my way through the content, but just wanted to say that I really enjoy the coin table in &&&&& Treasure - it prompted me to write this: https://peakrill.blogspot.com/2021/09/when-is-coin-not-coin.html

I have enjoyed playing this game so much! I've played it three times with different groups of people over the last week. Have written up a review and a brief summary of our first play here.

I have just published my first ever game as part of the one-page game jam. It's an RPG about death. 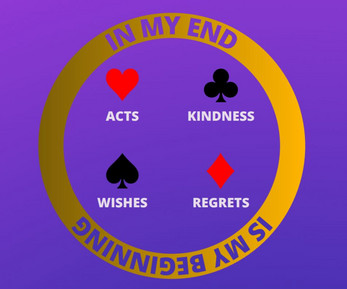 Most RPGs contain death, often lots of it, but only treat it as a technical issue, and something for players to avoid (unless they're inflicting it on someone else). There's never much space to consider what death really means. In the last few years, I have made friends with an undertaker, have lost my father suddenly, and have seen one of my closest friends publish an astounding novel about death.

Oddly, I felt the need to add "content warning: death" to this game, and it struck me as really quite peculiar that no other game I'm aware of does this, despite the trauma that death can cause.

Anyway, enough of the lecture, here's the game: https://dansumption.itch.io/in-my-end-is-my-beginning