Underhero Art Book
A collection of sketches, designs, and art for Underhero.
Paper Castle
Underhero
One in a minion
Paper Castle
Role Playing

Thank you for understanding, we're glad you enjoyed the game overall (despite the hiccups you described).  We're looking forward to making better games for everyone to enjoy ^^

Hey there! First of all thank you so much for playing the game and sharing your feedback.

Before addressing your points, we should probably clarify that we're developers from Venezuela, not the USA. This is not to say that we're beyond criticism because we're latinx, but that certain things that are seen as harmful in the US might have gone over our heads because we come from a different background.

There are many references of Venezuelan culture hidden in the game that most players will probably not get, and Pica Pica tribe was one of them. The Pica Pica tribe was intended to be a reference to a group of Venezuelan indigenous people called the Yanomami. Even though Elizabeth says they're "uncivilized", the joke was supposed to be that they're actually just like the other minions (if you check their houses they actually have very good living conditions, with TVs, ACs, and big beds. And all of them speak perfect English except for the chief). Elizabeth is just very prejudiced against minions in general, and at that point in the story she's slowly overcoming it.

Los Duros have two first hispanics names (which is common for us) and use mariachi hats to hide their weaknesses. El Salserissimo is a reference to Salsa music and to Hispanic characters in Hollywood movies that occasionally say words in broken Spanish, except this time el Salserissimo speaks correct and coherent Spanish between his English lines.

That said, we understand that what we made can be considered in bad taste and even harmful, and we do regret it. These jokes and references came from a place of ignorance, never hate, and we're truly sorry if they caused any harm.

Like you said, the reason we wanted to include the game in the bundle is because we care deeply about issues of racism. We grew up in a country of stark economical and social inequality, and it took us years to learn and break free of the awful beliefs we grew up with. It took us many years to make this game (almost 5 years), so much so that our ideals and beliefs have changed and continue to change to this day.

We're still learning, and we'll definitely take this criticism into account when working on future games. Again, thank you for sharing your thoughts with us.

That was before we added controller remapping to the game. Now it recognizes all controllers and can be configured in the options menu. The demo is just very outdated.

Edit: We added a disclaimer above for the demo info, thanks for pointing this out!

We're happy to know you enjoyed it!

We usually wait a bit before releasing a new patch on the rest of the platforms, in case something bad happens. They will be updated promptly!

Did you unpack the .rar files? You will need an additional program like winrar or winzip to unpack the game files. After you unpack it, open the game's folder and run underhero.exe

You can try forcing a new resolution by going to the main menu, then options, and pressing F10. Here you can type your preferred resolution and aspect ratio and press enter to confirm.

You will need a program like Winrar or Winzip to unpack the .rar files.

Once unpacked, open the Underhero folder and double click "Underhero.exe".

Glad to hear you were able to fix it.
Have fun!

It's on Switch, PS4, and Xbox One. It released earlier this year :)

Thank you for contributing!

Strange, we have tried downloading the files straight from itch.io and it's working fine on our end.

We had to re-upload the Mac version because it was not unpacking correctly as a .rar file and we changed it to a zip file. The other files should be working.

What program are you using to unpack the .rar files? Winrar is what we use.

Hi, we have fixed some things, try again and let us know.

Hi, we have fixed some things, try again and let us know.

It should be working now!

We have re uploaded the newer build, let us know if the problem persist.

If the problem wasn't resolved then the game is probably detecting another peripheral as a gamepad. During testing we found that it sometimes picked up drawing tablets as gamepads, we made sure to avoid this but it might still be occurring with other brands.

Controller detection cannot be changed because the user config is in the registry. As far as we know it can't be changed there.

You could try playing with the tablet disconnected or by changing your inputs.

To change your inputs on the spot, after the press start screen, press F12 to open the keybinding menu. You can press F11 to reset all inputs to default.

Hi!
We have re uploaded the Mac files, let us know if it works now.

Thank you for this itch.io team!
We want to participate with the full version of our game, Underhero.
https://papercastlegames.itch.io/underhero

Thank you so much!
We currently have no plans for Mac/Linux ports since we are aiming for consoles at the moment.
It's not out of the table though, we'll see in the future.

Aw thank you so much!
Glad to see Jim's video has brought more people in :)

Thank you!
It's very useful to know that it works decently. If anyone else asks, we can direct them to your post while we wait for the official port.
If we have any more questions we will definitely let you know!

It's in our plans! We would love to hear your experience with the game using WINE though, it might be a good alternative in the mean time.
Thank you for playing!

Ah, thank you so much!

Our 5 year in development RPG/platformer hybrid  adventure is finally available!

The chosen hero is about to fight the final boss, save the princess and the kingdom. But suddenly... BOOM! He's killed by a little underling, and all is lost.

You are that little underling.

Become the new hero in Underhero, an inverted RPG platformer adventure, inspired by Paper Mario and Castlevania. Fight with our own turn-based combat with a twist: there are no turns!

Use your reflexes to evade, and your timing to attack or parry! We call it timing-based combat. 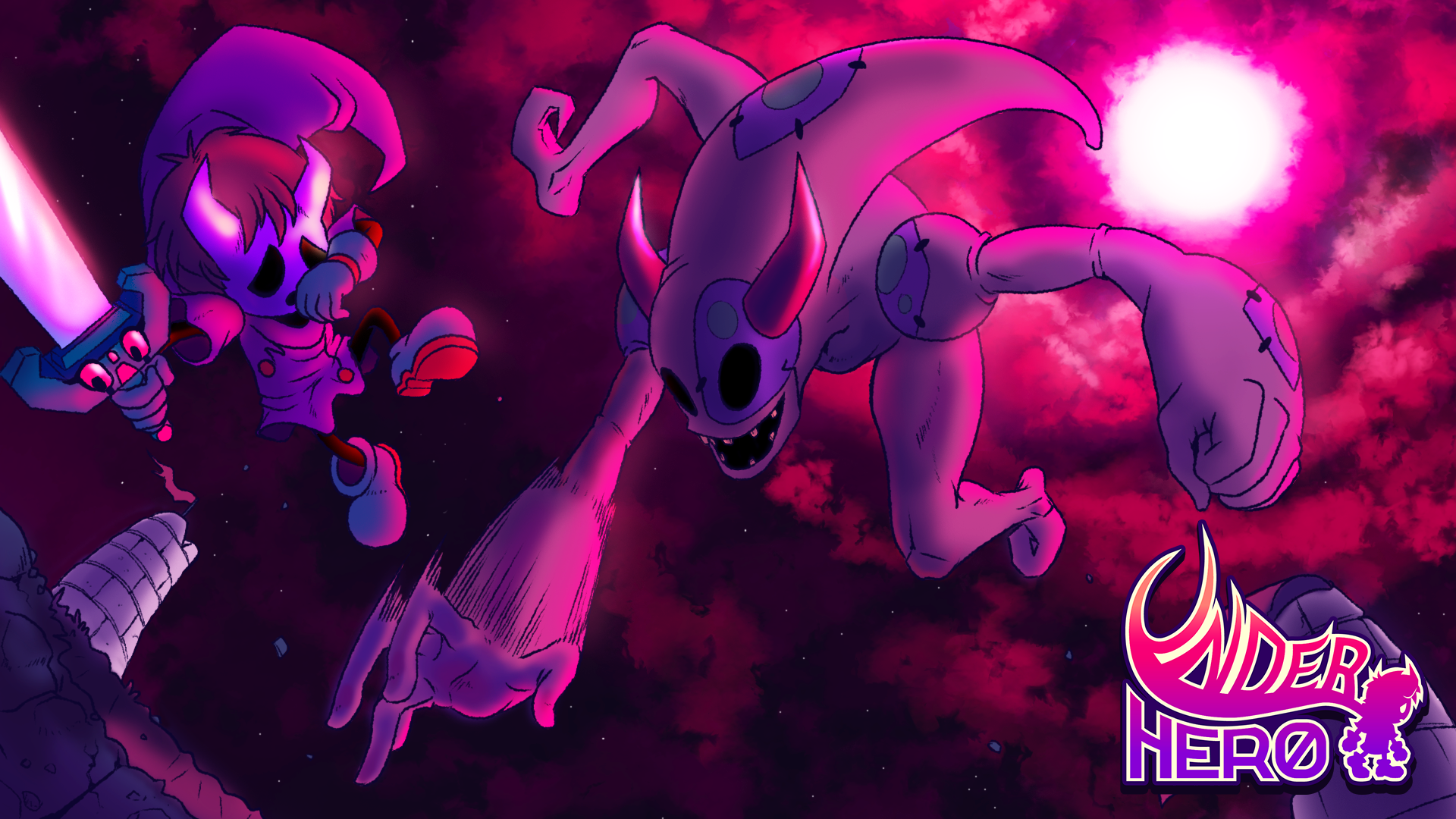 Awesome! Thank you so much for playing, happy to read you enjoyed it :D

We are only 2 working full time! It has been a lot of work to build this thing.
If you check our latest dev log you'll see that all the assets have been finished recently and we're basically polishing and fixing bugs through lots of testing. We are also preparing for an announcement soon, so hang tight please!

Yay! Thank you so much!

Thank you so much!
We haven't announced a price just yet, but it will be in the $10-$20 price range for sure.
We have individual voices for most of the NPCs now!
You'll notice it when the game releases :)

Thank you!
Added the update here on itch.io to clear confusion.
The resolution problem is a known issue of the demo, it's being dealt it!

Thank you so much for playing! Glad you liked it.

Thank you!
To clarify, our combat system is not rhythm-based per se, but a semi turn-based game about timing attacks and dodges. The music mechanic is just a little bonus for extra damage. The combat expands later on with more enemy variety and new weapons to choose from.

The talking during combat does have a deeper purpose, but not in the demo I'm afraid.
We don't want to spoil it here, but it is important!

Even though the name of the game has brought us more comparisons than praise, I'm glad to hear someone else agrees with our naming conventions! More specifically, we combined "underling" and "hero".

We believe it fits the themes of the game perfectly.

Not at all, go ahead!

We combined the words "Underling" and "Hero" since it best represents the themes of the game.

It has nothing to do with undertale!

Thank you so much for playing! Glad you liked it :)
We haven't announced a price yet, but it will be similar to other indie platformers.

Sorry to hear that, we are working on optimizing the game as much as we can.
Thank you for playing!

2. That is how its supposed to work. Mr. Stitches can disappear at will, he can be seen when he wants to be seen.

Thank you for your help and for playing the demo!