{Nezumi} Anything I can do to help? *Squeaks softly.*

Reply
High Fructose Hyperspace community · Created a new topic What's with the file with no extension?
Nezuneko76 days ago

It's mostly human-readable, but appears to have mark-up or notes for... I'm not sure what?

First of all, in Damia's Temple, I got an error message about not being able to find img/pictures/angelnpc4-1.png. (I had a screenshot, but I lost it)

Second, in the second Maze Trial for Valorie, it say upon clearing that I got a Divine Bracelet, but no such item is in my inventory.

Okay, got a Kitsune Mask in the little fishing village near the Mansion... except, again, not. Not showing up in inventory as any type of item.

And another unable to load error message, this time during The Pillow Thief. (Also, this time I managed to actually get screen.) 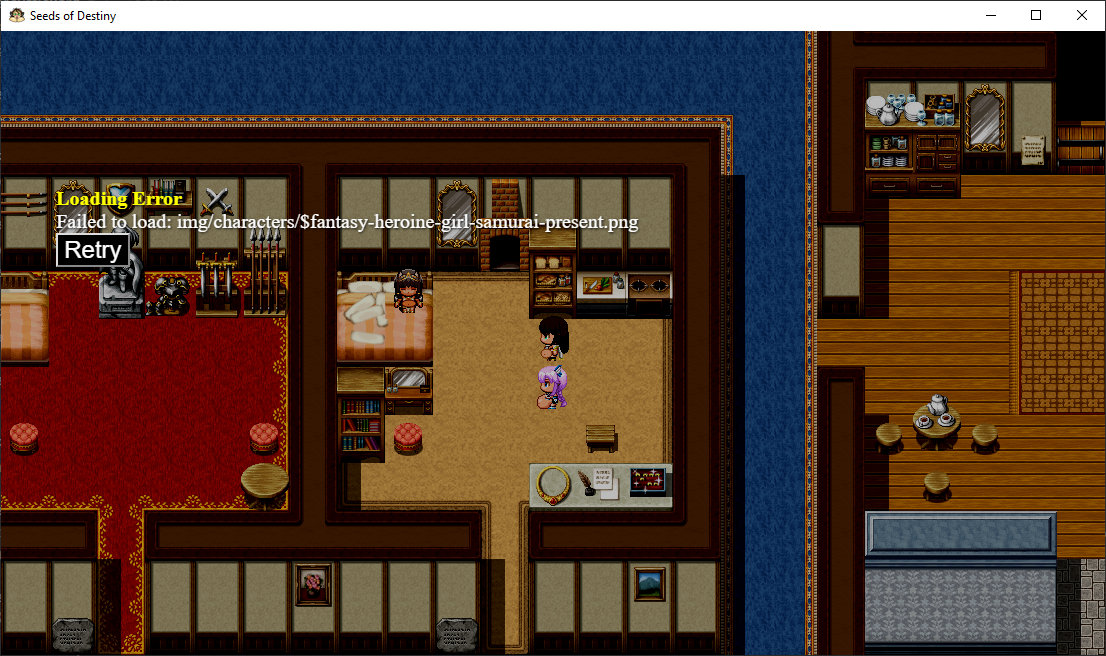 Wait, does the "Don't finish Divine Trade immediately" thing still apply? x.x; I did it as soon as I could, because, well, preggy girl. *Wiggl.*

... Richard driving someone to suicide makes it impossible for me to even briefly consider rooting for him to win, as someone who's struggled with suicidality. Alicia is a creep, too, but she's at least, y'know, sexy and hasn't crossed such a revolting line. If there's any way I could not help Richard as her in the end, even if I still brainwash Aura, that'd be great. (Or you could just dial back his horribleness a little bit so that anything other than his very soul being annihilated forever doesn't feel like losing the game)

None of them are hidden anywhere the camera won't show. Just search each room as thoroughly as possible. Also, some of them are *extremely* difficult to safely get without using your attack, so you might wanna unlock it before going all in on the search. (If I had to guess, you either missed the one in the clock tower that's most visible from the top of the stairwell, or one or more of the ones in and around the staff room)

EDIT: I may put together a complete location guide later if I can.

A lot of people are complaining about how weird the camera is, but... that's how most survival horror games used to play. It does make the controls a bit awkward, admittedly, but it's something I'm kinda used to. (Tank controls help some -- they're kinda awkward in their own way, but there's much less issue with having to reorient yourself as the view changes)

{Susie} I... am trying to wrap my head around that, and whether you're saying it's a good thing, or a bad thing. *Squeak-squish.*

I found a file in my Mega downloads directory called Portraits.Rar that looks like it *might* be a portrait pack for an extremely early version of Strive for Power, but I'm not sure, or what it is if not. It's from April 17th of 2017, with the files in it being from the 13th to the 16th, and the races it has mostly line up with those in the game, but as an extremely incomplete list with some inconsistent naming (It has "googirl" instead of "Slime" or "bunnygirl" instead of HalfkinBunny, for instance) Anyone know what's up with it? I can upload it somewhere if you need to take a look at the contents to be sure.

I appreciate the overall anticapitalist message, but have a few critiques:

2) The complete inability to reverse course or affect anything even if you actively try feels bleak and overly cynical.

3) Conversely, the idea that we can recover from massive global warming and climate change even if we do nothing to stop it feels naively optimistic.

Waits, the High School is nameds Akumahou (Evil Magic), ands the university is nameds Salem. Rei is... sensings a pattern. 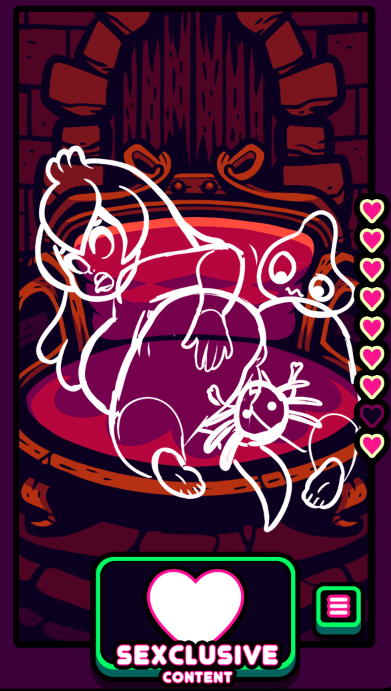 Rei's gottens this ending, but she's pretties sure it's a glitch, as its unlock doesn't reallies make sense. (It happens ifs Rei puts Lim-Lim to fish ons middle screen, an'  jus' belows the grate ons the last one, then picks ups Lim-Lim on the screen where they's fishings.)

Rei manageds to solve the slashes parts of the last puzzle, but she's... reallies not sures how. She was tryings to plot out the course she thought it was indicatings one step at a times, an' the first step mades it clear.

Rei is less impressed than she hopeds wif the motivational training. Was kind ofs hoping it was goings to be more... uhms... mind-control-y ors corrupty or somethings. Rei is a weirds kinky ace nekomata kitten, thoughs, so I's sure lots of peoples likeds.

I've run into a bit of a problem. After deciding to try to defy, I offered to serve her of my own volition, and well... 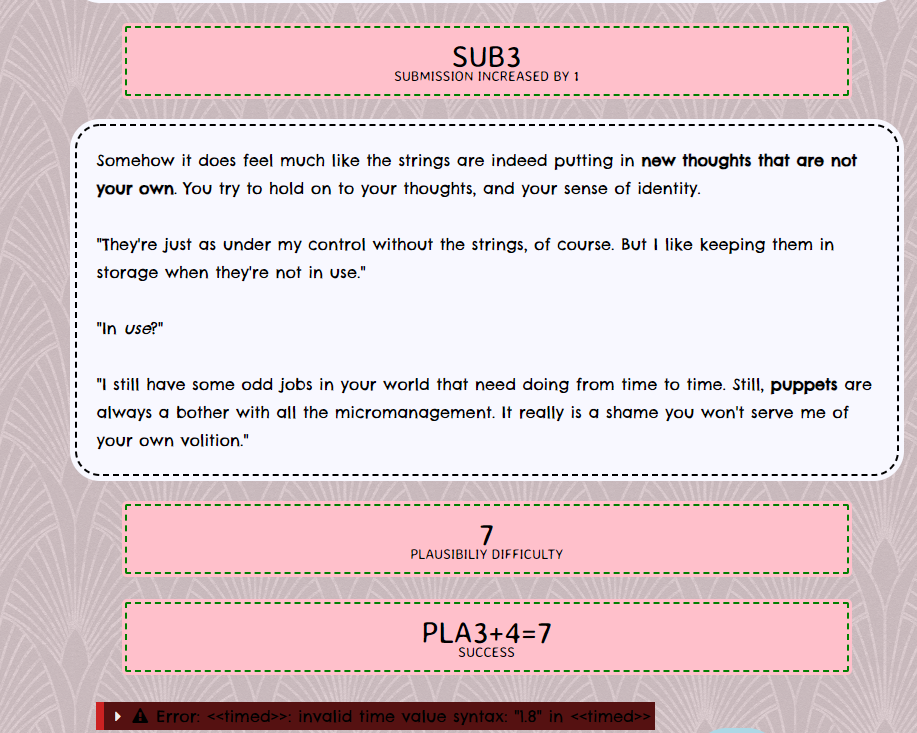 I feel bad for Mimi, getting passed over after all she did.

Oh, hey, a -- by all accounts -- great game I'm probably never going to play. It's a sequel to a no-longer-available game (because the creator is now ashamed of it), and I dislike jumping in with sequels. The plot summary doesn't really help with that for me. (Plus, it's a nightmare for archival, a subject near and dear to my heart) Sorry!

The Itch App will preferentially run from the ZBlockaudio.bat. I'm not sure what that batch file is for, but for me, it means that it will load without sound. Renaming it to remove or change the extension or deleting it outright will make it ask for an exe to run and fix things. I could possibly also just remove the -blockaudio option from the batch file contents.

It's fine! Was trying to help, mostly!

I noticed that if I follow the Chapter 1 portion of the walkthrough exactly as listed, I get Sparky and Angel to full heart and Brownie to one less when it says it should be Angel and Brownie full heart and Sparky one less. (This is an issue, as you get later chances to increase Sparky's hearts, but not Brownie's, nor do you get another opportunity with Angel that doesn't cause problems) I found that if I just talked to Sparky before coming back and recruiting him with Brownie and Angel in tow, to avoid the scene between him and Brownie, I got all three to full at that point.

I would have bought this sooner if I'd known about it! Sadly, I did not, and just got it as part of the gigantic bundle for BLM.

That's... actually not good news, given the history of the game and company.

Ooof, sad I missed this.

I really wish I could succumb to Aima, but... she does make a cute pet, too~

My only complaint is that you can't turn all the way into a cute mousiegirl.