Blueprint Animal Jam
A game of weird animal masks and dungeon-building.
Merlin McGraw
La Bête: A Solo Game
You are a monster. Survive.
Merlin McGraw
Dungeons & Day-Jobs
Journey deep into the wilds of your business office on a mighty quest for your boss.
Merlin McGraw
MarrowScar
A setting with elements of fantasy, steampunk magi-tech, and a light sprinkling of eldritch horror undertones.
Merlin McGraw

This is all super great to hear! As a neurodivergent queer myself, it is always satisfying to hear people resonating with the vibes I was going with while writing! I am absolutely still intending to work on variant starts in the future, I've just been held up a bit due to real life events.

I also super appreciate the feedback! I'll clarify what I can here and then definitely go back in a future edit and clarify in the actual PDF (and also fix the typos, whoops).
1. I hadn't even though of diagonal cards but on mulling it over a bit I think I'm going to rule that they don't count as adjacent.
2. Originally I intended for it to only be 'the card's effect is activated once upon flipping it', but if it works then it can be a fun variant rule to trigger them any time you cross them!
3. As originally intended, you don't have to achieve both Goal Cards to win, but again that could be another fun variant rule to use! I really like the way you translated that in your game!

All-in-all, this was a completely un-playtested and un-beta'd game I made in like a week for a game jam and I'm so happy that every reaction I've gotten has been of general enjoyment!

Reply
La Bête: A Solo Game community · Posted in Are the Aces the Goal Cards?
Merlin McGraw321 days ago

Yes, the Ace cards are the only Goal cards. And only the Aces you choose to count as Goal cards, as the different scenarios presented may not be ones you as a player are interested in pursuing.

Reply
#fuckAdobe Game Jam community · Posted in Joined the jam? Comment here so I can share the image prompt to you.
Merlin McGraw1 year ago

Oh this sounds potentially interesting. Hit me with that photo inspo!

Thank you so much, I really appreciate it! I worried occasionally while working on it that I'd bitten off more than I could chew, but I'm very proud of what I ended up with. 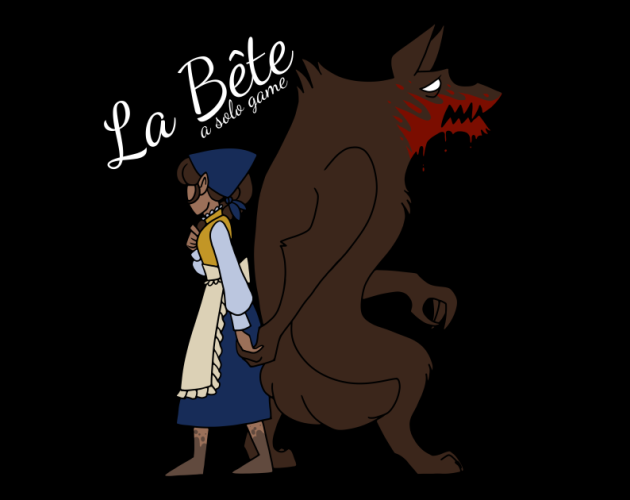 They say you are a monster. Navigate the world and manage your resources carefully to escape the forces pursuing you, or meet them head-on to destroy them and reclaim your territory.

La Bête is an experimental fantasy game created with the Carta SRD for the Carta Jam. It is a modified system that combines the original survival mode and collection modes of gameplay for a longer solo game about managing your resources to survive and either escape or fight.

To play this game you will need:

No matter what, this game will be released in April, as it's meant for the Carta Jam. However, with your help via pre-orders, it can be nicer and fancier upon release OR it will be updated to be nicer and fancier after release if we reach these goals post release. If you pre-order, you also get it at a 20% discount! 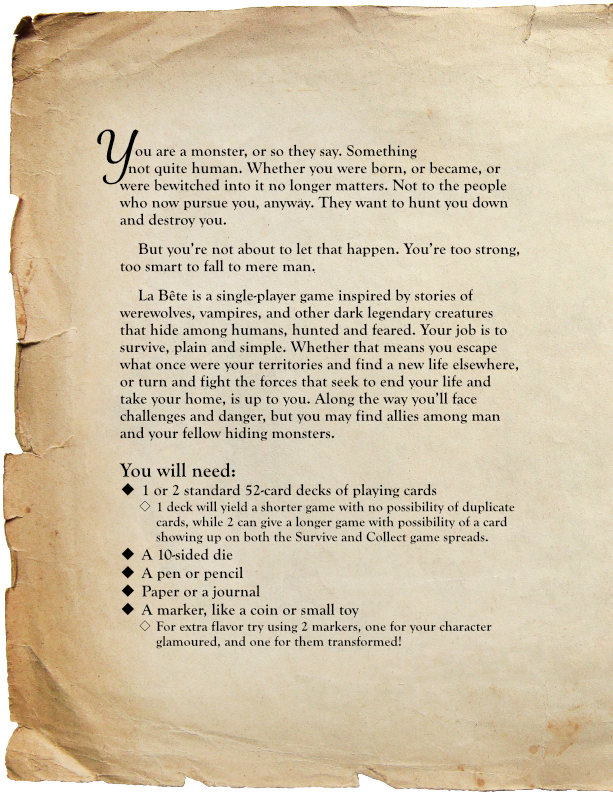 Hey, while making a character or monster-sona for this game or based on the story you come up with during gameplay may be fun: don't be appropriative. There are plenty of other monsters to be than ones from marginalized or closed cultures. Also (to borrow a disclaimer from the Carta SRD) nazis, homophobes, transphobes, and other bigots are expressly not welcome here and forbidden from playing this game. If you have to ask whether this includes you, it does. 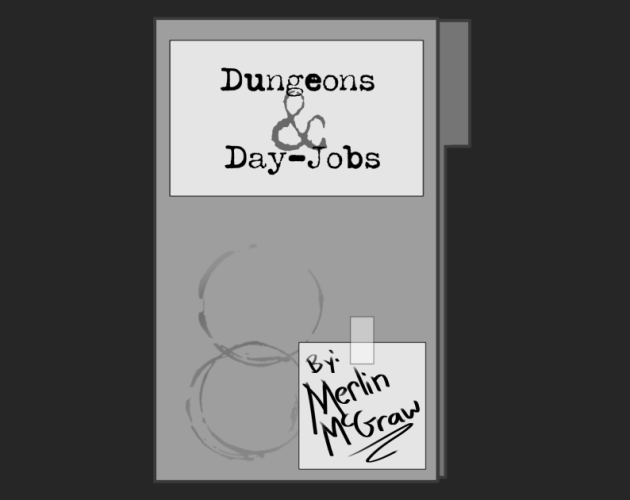 You work in the untamed wilds of an urban corporate office, and your boss has given you a quest. Delve into the dangerous depths of the office to complete your task! Brave the Cubi-Labyrinth and its Managetaurs to get your photocopies of That Big Report. Avoid the Lunch-Sirens before they make you waste your designated 30-minute break. Delve into the Shelfforest and dodge Stock-Stalkers to get to the Understock and retrieve the mythical Container of Tone-R.

Dungeons & Day-Jobs is a hack of the Tunnel Goons system meant for 2-4 players (employees) and a GM (the CEO). It is a simple rules-lite game involving 2d6 for rolls and is meant for casual, humorous games. It's my first ever game and also based on an obviously fantastical version of my old real-life jobs in offices and elsewhere.

It comes with both a PDF to print and fold and a rich-text file for ease of reading both on-screen or printed itself. Also: a bonus of the poster on the back of the printed PDF, just in-case you wanted one you don't have to fold and cut!