Pushed out a new update, it should fix a ton of the fullscreen issues. Let me know if anything is still broken :)

There are, in fact, counters for your ammo and your health in the top and bottom corners of the screen. However, when you enter full-screen, it appears the top and bottom of your screen become cut off, preventing you from seeing that important information. (Full-screen is currently the bane of my existence, since it doesn't seem to fit to the screen on your computer but does on mine.)

I may fool around with different placement for the ammo and health counters, but in the meantime the choices are guess what your ammo and health are or exit full-screen. :(

I really appreciate you taking the time to show me all of these bugs, especially with screenshots so I know exactly what the problem is!

I'll be investigating what's causing a lot of these problems, but I have a feeling a couple of the alignment issues are due to the full-screen option with clickteam fusion being a tad buggy. If that's the case, I can try to find a way to make the game more full-screen friendly. In the meantime, exiting fullscreen to view what's been cut off then returning to full-screen might make things a bit more enjoyable. :)

Thanks for pointing these out! I'll address your points in the order you presented them to me.

Thanks again for telling me about these problems!

Spiderbite 2 is officially out for early access!  Kill flies before they kill you in this 2d top-down shooter with arcade and horror elements. 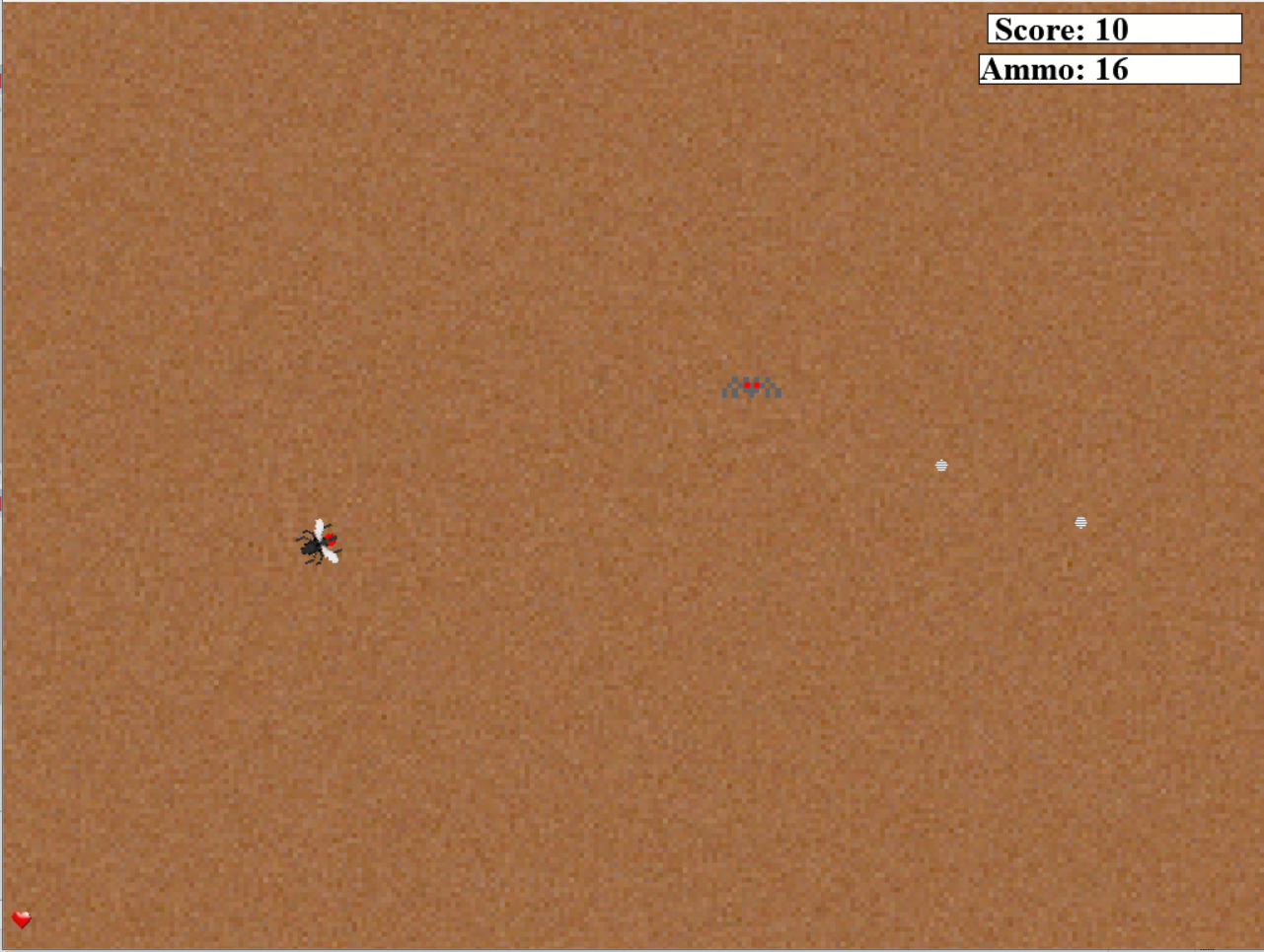 This game is amazing. I have no idea how you came up with such an innovative concept. More importantly, you made it so freaking entertaining!

Thank you for posting this, for free AND browser-based no less!

I think it may need a little sound, but I enjoyed it!

Not bad. The gameplay was solid, I really enjoyed playing.

I can't really reliably fix the sensitivity of the aiming, but I can make the background brighter! It appears html5 resets the blend coefficient of all active objects to 0, but the problem is easily fixable and the solution will be presented in the next patch.

As for the fourth phase/entity, I may have been a little unclear. The first phase has two movement sets. When you begin, the boss is on a track going around the outside edges of the room, shooting at you. After you reduce his health by half, his moveset changes and he begins to actively follow you. I counted this as a phase, but it's more like a bit of a small shift in the first phase. Sorry if that was a bit confusing. :)

As for the space bar, I'll fix that the same way I did in Spiderbite: changing the button used in the next patch.

Thanks again for your bug spotting! :)

Long story short, this game is awesome, and I'd like more please, thank you.

There is not, but I'll attempt to implement a solution in the next patch. Apologies for the inconvinience. If you wish to keep playing, it appears that the screen's giant nature only applies to the menu screen, the advice screen, and (possibly) the winning screen. Hitting play should restore it to acceptable levels.

Thank you for alerting me :)

Apologies for the game's slight buggginess, I will attempt to fix these problems. It's strange, there are always a few things that work when you initially bug test that break without explanation when you load it into html. As for the controls, I'll add a screen that explains them in the next patch ;).

Late Night Gaming is a simple horror game in five levels that slowly introduces new gameplay concepts to distract the player from the dark presence creeping out of their closet. The main objective is to download and play a minigame posted by their friend as a beta.

You must wait for the project to download before playing.

You must stay alive while you wait.

You must stay awake to stay alive.

I liked the story, but the music didn't work.

This game  makes me seriously question if I'm worthy to have a brain in my skull.

10/10 would have an existential crisis again.

Great game! Fantastic art, good mechanics, short, sweet, and to the point! I'm curious, how long did it take to make this game?

Ah, I see what your problem is with the skins: you're in the wrong section! It's not in shop, its in unlocks XD

Thanks again for your feedback, Hobcramwork! 1: In relation to the gold- Currently, it is entirely luck based (something I personally dislike, and will be fixing as soon as possible). Every thirty seconds you survive, you have a 20% chance of gaining a gold piece. One of my playtesters managed to get three or four gold pieces over a few plays, while I only managed to get one after ten or twenty! So that will be changed as of version 0.6, which will introduce a few large gameplay changes!

2: The skins aren't working for you? I've been testing my game for a while, and I've never heard of this as of 0.5. In fact, I just loaded up the game, and the skins are working for me. Is there a chance that you didn't have a high enough score before you went to the unlocks screen? If not, is there any way you could send a screenshot of your problem?

3: The boss fight was meant to be pretty hard... but it's not the end of the game. I plan on introducing challenges and most likely additional bosses that more of the story. Mostly, the final "cutscene" was really only there to get you thinking about what could be going on.

I'm glad you're having fun!

As of yet, you still cannot shoot with the mouse. However, as of version 0.4.0, you can shoot using your ijkl keys! :D

Out of popular demand, the new update has added twin stick controls! Thank you for your feedback :)

Thanks for your kind words! I've just released version 0.4.0 which allows for twin stick controls, as well as adds multiple achievements and a purchasable 'grimoire' if you are interested :)

Just finished releasing version 0.3.2. The unlocks page now works, along with a bunch of other bug fixes you mentioned. Thanks again!

Thank you for your extensive review! In light of that, I'm going to attempt to address each of your points with one of my own.  Apologies if it's a bit long :)

One, I have incorporated multiple controls for shooting into the game. If one doesn't work, another might. Check the description or the in-game page labeled "controls" to find out what does what :)

Two, I have begun to encounter problems with some  values behaving as they should in my downloadable test version and the same values not working in the online version. The gold value is one of these values. I'll look into how to fix it, although it may take more time than fixing the HP problem that arose before the patch.

However, I am also working on an update that should phase out the need for gold to upgrade your max health. :P

Three, I'm glad you thought that the movement/aiming system was a good piece of gameplay.  I was considering replacing it with twin stick controls, but even if I do I believe I'll release an "original mode" or something along those lines with the original controls still intact.

Finally, if you got far enough in the game, you should have unlocked a few skins in the unlocks menu. Simply click on the word "Unlocks" in the main menu and select a skin, then play the game and the skin should show up. This should help make the spider more visible :)

Good luck, and thanks for the feedback!

P. S. good job getting to the boss with the gold system glitching, on one health it took me a few days to do!

Working on a fix for the whole health upgrade situation as we speak. :)

I've seen that bug before, but it doesn't seem to always do it. I'll do a bit more testing, see if I can fix it. Thanks for letting me know its not just me.

Yeah, I posted an update to the game a little bit ago, and I believe there have been some issues. Sorry about that. It will be fixed in the next patch, which I'll get out as soon as possible. :)

Thank you. I apologize for your inability to die, the new update appears to have a few issues. It will be fixed in the next patch.

I've just posted an update to the game that should have fixed the problems you were having. Thank you for your feedback!

Would it be ok to post an update to an old game you only posted the early version of? and what if you've been working on multiple games, can you submit more than one project?

The game won't start for me. Is this just me?

I really enjoyed trying to avoid the ghost, but my screen scrolled up and down when I pressed the up and down arrow keys, and when I went full screen the game froze! Good concept!

I really liked your game! I know that gives little info, so here's a short synopsis!

Good game! I only wish there was more!

P. S. sorry if this went on a little long, I don't comment very often.

You're good, man! I'll keep that in mind for next time :)

Thanks! I'll try and focus on the commentary in future games! :)