Thanks for reaching out, it's a totally fair question! I'll try to put your mind at ease.

There's a couple things that will make this achievement pretty easy over the course of the game. First, I would recommend Chill mode, as the timer is much longer than Normal mode and as a result, more forgiving. There's no penalty for switching modes, you get the same rewards as you would Normal mode. Hit "B" on the title screen to change that in the options menu.

Next, over the course of the game you'll unlock gear that will make that achievement (loot), as well as others, easier to unlock. In fact, the  very first item (pocket watch) is very helpful to keep the quick solves rolling. And keep in mind that a quick solve doesn't need to be flawless, so if you use up two of your guesses in short order to solve a code quickly, that's cool!

Truth be told, when I developed this game, as I got used to the puzzles I was worried it would be too easy. Hearing from a few who struggled early on opened my eyes to a few things that v.1.1 of the game addresses and hopefully makes things easier. As with any puzzle game, like sudoku, once you learn the patterns and what to look for, you may find yourself solving codes in 10 to 15 seconds. After all, every code is a 4 letter word, so it's kind of like Wordle, except fast (at least that's what I was going for). If you need any pointers along the way, don't hesitate to reach out!

As for the demo, I took 20 words and set (most) of them aside specifically for the demo, so it works just like the game. It's actually possible to unlock and purchase an item and unlock an achievement or two in the demo, but it's really a small flavor of the full game. Without the secrets, of course. The only difference is I haven't updated the demo to v.1.1 yet, so it doesn't have Chill mode in it.

Thanks again for taking interest in my game, I hope you have a great holiday!

At first, a lot! It took me a while to realize I could develop a method to automate the code/variables for the levels, but that meant I still had a lot to do on the front end. I tried to prune out a lot of words that would be tough to guess (the types you’d tell your friends to go grab the dictionary to check during a game of scrabble; real words, but not fun to guess). It was a fun learning process making the levels though! 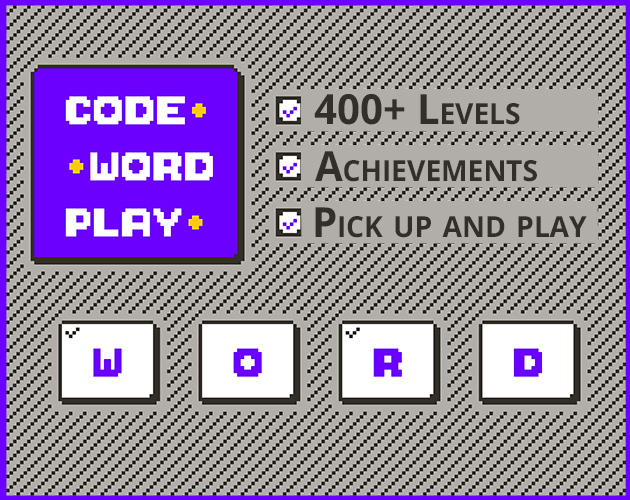 Do you 1) own a Playdate console and 2) like word games with pick-up-and-play snack-sized puzzles?

CodeWordPlay is just $4 and makes for a great complement to the Playdate's Season 1 games.

This game is so good, but really challenging. Great work!

Echoing Martin’s comment, I’ll just stress that the timer moves way too fast, but I see the makings of a great idea here. I really want to play it when that is updated.

I just beat it today despite the bugs only to see you’ve been working on fixes this whole time. Good to know! Really nice little game, I enjoyed this a lot.

Awesome, I’m really happy to see that, thanks for letting me know!

It’s no rush, I know how it is! I actually figured out the solution after I commented, go figure. But I appreciate you double checking it for me!

Enjoying this so far! However, you should have the “next” level unlock after you complete a level. When I turn the game off and come back to it, I have to redo the level I just beat instead of the one I’m currently on (1-7, which I’m not convinced there’s a solution for, it has me stumped).

Really enjoyed this one. I had to play it a second time through because I walked past two of the question marks without thinking. Great work!