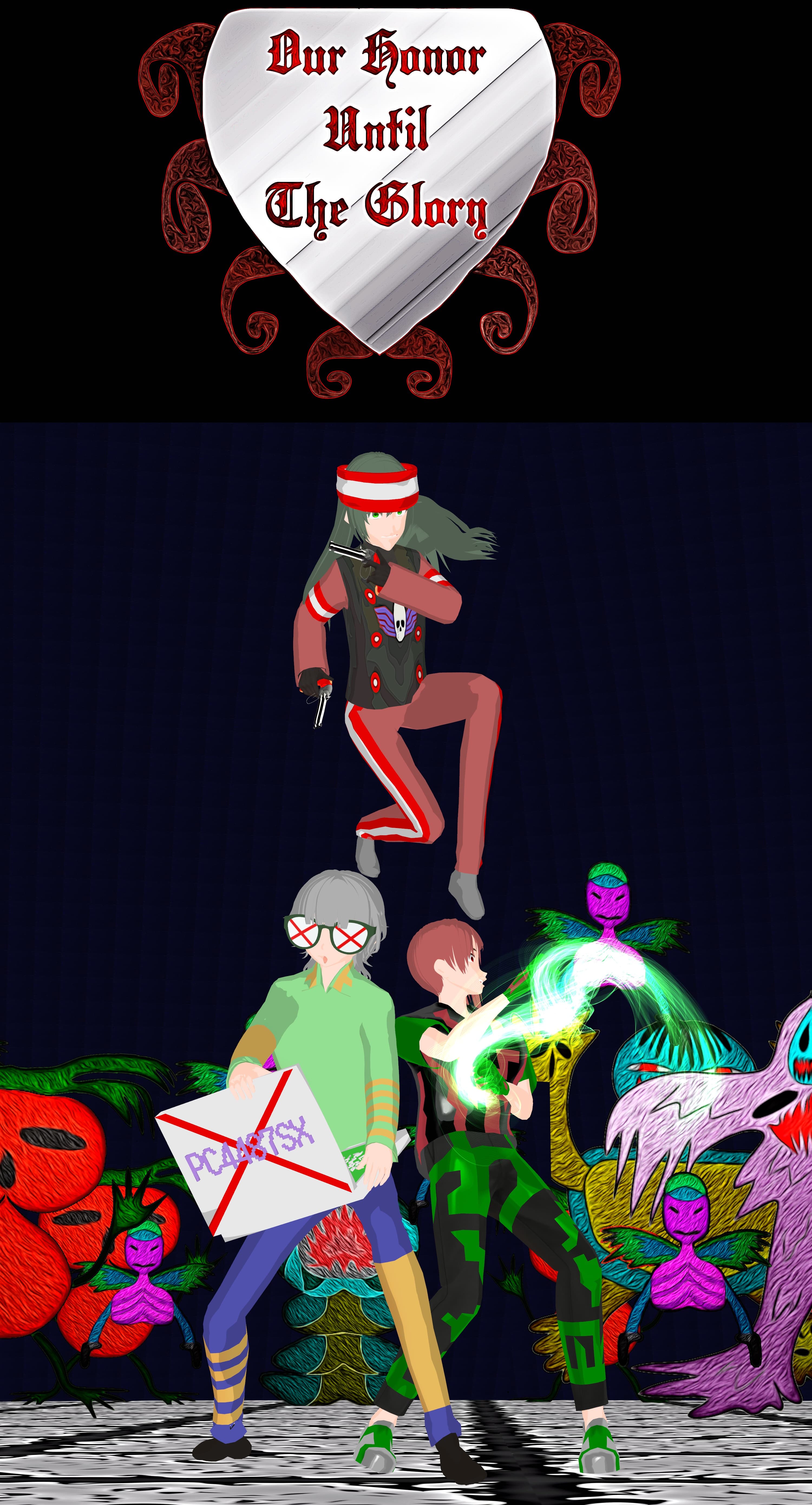 Description and Plot of the game.

Post apocalyptic video game based on a world that is mysteriously invaded by strange creatures. In District 3, 2 friends manage to survive by hiding, but due to hunger and food shortages, one of them was forced to restore an old military equipment in order to face these creatures.Along the way they will meet a mysterious woman who will help them in the investigation of the origin of these mutants.

Characters from the video game

Orphan. age 19 years. before the arrival of the creatures, he worked manufacturing and designing electrical devices, both industrial vehicle designs and armaments. The 2 gloves made by him allow him to use an infinite number of electric-type attacks that visually resemble ancient magic.

Age Unknown. Former Army operations command in the Austrian district 792. when all the armies of the world came together to form The Government Army. She was expelled from her district unit. Expert in the use of weapons. creation of command-type operations. planning of combat outposts. he carries 2 pistols that appear to be antique. but they actually have the most high-tech in their district.

Age 23. Expert technician in programming. before the strange events he dedicated his life to the programming of various softwares.  I design a computer program to combat the mutant pests that prowl the streets.  their skills will help you a lot throughout the game. it is capable of breaking any computer barrier that hinders your way.

Link to the project.

Reply
itch.io Community » itch.io » Questions & Support · Replied to No Time To Play in Consultation on the section. (Release Announcements)
MediaMZ276 days ago (1 edit)

The project to be placed. if I put it with the option in development. is it listed in the search section?. or I can put it in private and give the link in the section thread. it's just that if it's not finished. it will only contain images and a video. Description and others of the project. if it appears in the search they will think that it can be downloaded. and it's not ready yet. it's just to announce it. So, could that link be placed in the announcements section?. in private?. that it can only be seen by those who enter by link of the Announcement or by my profile.

In this section an advertisement about the development of a game can be published. With images and videos without placing it if you are not finishing? Announce it in development mode. Or it is necessary that it is finished.

Update to version 1.2 where I add 3 new aircraft to the package.

Fokker DRI. the plane used by the Red baron

Do you have a video game designed in this style?

Reply
itch.io Community » itch.io » Questions & Support · Replied to No Time To Play in How long does it take for a project to appear in the search?
MediaMZ295 days ago

are those really the requirements or could I play it with less resources?

World War I aircraft pack in 2D . I will list below the aircraft that you will be able to get in this pack. They are designed perfectly for arcade style games.

Each plane comes in a sprite that has 8 animations of very fluid quality propeller.  They are basic sprites. but in the future I plan a pack of turrets that will be used to place on some of the aircraft. The ones I have put are currently static.

I've been stuck on the platform going up and down with the pins facing up. I know the way it goes, but it's quite difficult.  it's good puzzle game

Reply
itch.io Community » itch.io » Questions & Support · Replied to Rafster in How long does it take for a project to appear in the search?
MediaMZ298 days ago

it's not really a game, it's resource packs. but I imagine it's the same.

Reply
itch.io Community » itch.io » Questions & Support · Created a new topic How long does it take for a project to appear in the search?
MediaMZ299 days ago

how long do projects appear in searches after they are published.  the resources I have created in the projects section have not yet appeared in the searches.

Is there a certain time for projects to appear?


Reply
itch.io Community » itch.io » Questions & Support · Replied to No Time To Play in How can I receive the money in Paypal?
MediaMZ300 days ago

Reply
itch.io Community » itch.io » Questions & Support · Posted in How can I receive the money in Paypal?
MediaMZ300 days ago

In the payment tab there are 2 options, the credit card and the billing address, I do not see option to connect the account.

Reply
itch.io Community » itch.io » Questions & Support · Created a new topic How can I receive the money in Paypal?
MediaMZ300 days ago

I wanted to consult if it is possible to configure a payment method that is via PayPal.
I do not find that option in the configuration, I do not have a credit card.

If so, they would tell me how could it configure it.