honestly I was kinda feeling like the delayed response might be because the way I solved it was so 'bad', lol. idk, it's probably not the path you were hoping players would go through

It sounds like the killer simulator idea is singleplayer, right? I've heard of Overboard (just lots of branching paths created) and Gnosia (randomization) which kinda do this, but probably aren't what you're going for.

I have had a similar thought about a future game I'd like to exist. It feels like 'social deduction' games with hidden roles don't quite simulate the experience of like, solving a murder mystery or gameboard, just because of the massive amount of hidden info and also there's like a "lack of possible tricks" imo. Like, you can definitely try to """deductively""" solve something in a social deduction game, or try to pull a trick and go 'undetected', but the lying/deception is the focal point there, which means even figuring out the killers involves the chance of not being believed. I also think this wouldn't work too well in singleplayer, as "AI figuring it out" would be luck based.

Well, this just happens sometimes. Enjoy the LUCKIEST playthrough of your game lmao

I did not even know if I had found a troll "you kinda failed" ending or the real ending when I submitted the solution. I was shocked that it worked. It was only after the culprit is talking about 'changed my name ...' that I realized it was correct.

I also did not really understand the structure of the Locked Room Loop until going over it a few times. Thought the servant/game room were connected directly to the dining room and was confused about Dining having two entrances. Didn't even know how many keys there were. Eventually figured it out though.

My 'issue' with the Locked Room Loop is that the game, in-universe, points out a wordplay about the word "locked", and that kinda just keeps nagging at me the whole time there. It's never really denied, it's just a dumb global wordplay thing that I had to try to ignore because it being the solution would be dumb, and yet the solution in my opinion is still kinda using it.

Basically, as the forum posts in-universe point out, "it was locked" could be an adjective or adverb. That's not directly what the solution does but it feels too close to it IMO: "it was locked" in Erika's statement refers to "it was locked at one point in time". It's not even like I didn't think of the mechanics of the lock trick being the solution either - I just didn't connect it.

I thought Erika was the culprit and Beatrice did not mention unlocking the door because it was never locked at all, followed by 'checking' the door being locked referring to some other time it was checked. After the failure I just switched the culprit to Beatrice lol.

The remote kill was not what I anticipated at all. It was curious the game kept referring to a trap in that section. I just thought the bullet was shot through the wall. And if there was a gun sitting on the floor that's such a hilarious risk, and wasn't it supposed to be in the opposite room, not so easily visible?

I always wanted to code something similar to a "ur the killer simulator" so that was excellent to see in the first section. Really enjoyed that! Honestly for the purple truth summary - I kinda wondered about being able to, after a culprit's been selected, show everyone else's text as red or something, because they must be true now. Purple truth is so much about organizing a certain set of statements as lies, but it's hard to keep that list at once, I think.

Finally there are, y'know, typos ;)

"seperately" (instead of 'separately') is in the hints, somewhere.

I found those two while playing normally, then looked through the script to see if there was any more:

Anyway, it's been great to read one of your works again!

Yes they're meant to be challenge levels, also I did a playthrough on it:

Funny ending, nice aesthetic, I'm not sure about the number of text lines (at some point I was just getting ----) but exploring was pretty fun. I kinda wish I could walk faster, it was boring/annoying to hold left-shift, honestly I was holding out hope for a movement speed upgrade even though that's usually never in this kind of game lol

Also spoilers (hopefully this is below the 'read more'),

Unfortunately I was too stupid to find the ending legitimately. I was playing so tired I passed out and woke up to the game being finished, then reconstructed and realized why it worked lmao

I know this idea is cool but also not sure this is the best way to express it - maybe there'll be another version, maybe not!

Warning: it's kind of deceptive 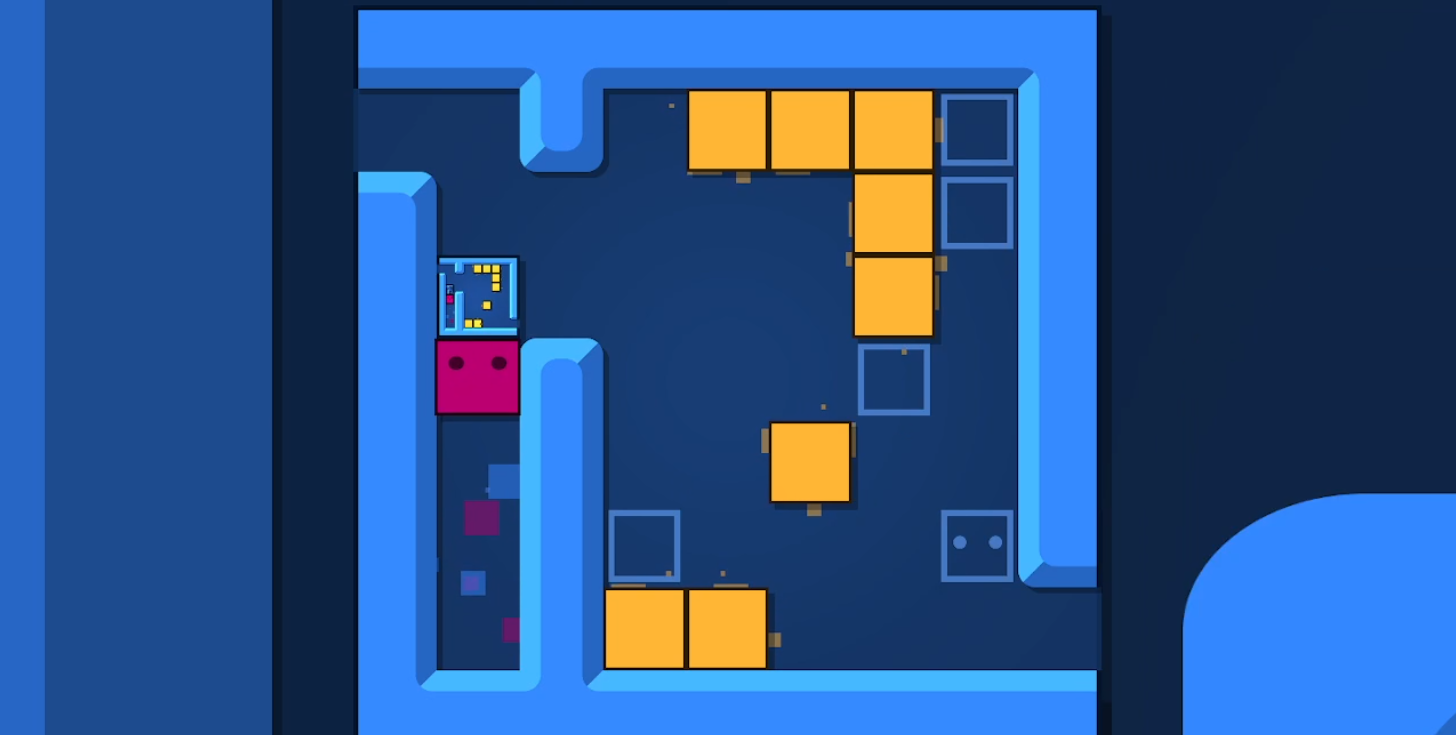 What does the "their analogues" mean for black and white if grayscale's not allowed? Does that mean you can use a dark blue and a light blue or something?

That was a cool game, I like the rule-discovery type of game and I am surprised I haven't seen this concept before. It's great!

nice little puzzle, solved in order 3 1a 1d 5 2 4, although I'm sure my word for 2 is correct I don't really understand how it works in the cryptic meaning lol

I do agree that it annoys me that I can't interact with stuff right after an error. It might have some anti-brute-force usage but I think I'm more annoyed with it there than not.

come on really, I really liked the gradient to represent 'half black half green' for example, and now it's just two solid colors :(((( lol

I was recording but obviously I didn't intend to have the bug so I got annoyed at the end. video:

also had a bug where I couldn't press anything, think it happened after leaving+reentering apartment

I really liked one of the in-universe things being acknowledged near the end of chapter 1. I do kinda wish it had more of that there, like acknowledging the player doing nonsense answers repeatedly (as they should realistically lose patience if Zarah was saying "there's too much Noise" for 10 minutes, lol). Also I would like to see another Exit/Corners commentary stream!

yo i recorded playthru

Cool game and mechanic, but I shared the thought with other commenters that I'm not sure about the player-as-the-spirit not actually knowing the 'answers' to the questions, as well as that the spell cards should be seen for everyone, so no one should be asking "why did they say ANGRY instead of MAD" if MAD wasn't available to signal.

is there an fps limit because my computer fans spin hard when playing this, would love to play the rest of it otherwise

Hi, I saw game on front page, played game, was a very cool game with great aesthetics and great moments throughout. recorded it

Reply
Dicey Dungeons: Yet More Episodes comments · Replied to not mario in Dicey Dungeons: Yet More Episodes comments
main_gi1 year ago
I still got crashes on the random-blessing related items, and I found some of these episodes to be too similar to vanilla gameplay. Inventor's 2nd and 3rd rounds seem significantly easier than before. You just reroll gadgets until there is an overpowered one. Witch's 2nd round is a cool idea but lacks player customization during the run, as well as some display issues with added items like "Mouse@yme" appearing. It's also unclear what a 'prepared' slot means in that run. Overall I wish there were more distinctive rulesets for some of these rounds that I got bored of. I still plan to play up to the Alternative Universe ones at least which I have been saving.

balance ruined by The Earth lol

I recorded my playthroughs, both end in a crash if you need to see what happened, I got another crash with Witch's regeneration spell, after it didn't show what 'regen' meant:

sorry that these videos are like hours long but I'm still not at the part where the 2nd-6th episodes  for each character are unlocked yet, so my commentary reflects frustration about the 1st episodes not seeming to change too much, compared to vanilla, lol
Reply
Dicey Dungeons: Yet More Episodes comments · Posted in Dicey Dungeons: Yet More Episodes comments
main_gi1 year ago

I played about 1 hour 30 minutes of this of the first three classes. I had a very frustrating bug with Thief where the thing that gave both you and the enemy Counter X, would repeatedly and seemingly randomly trigger even when there was no way it could, like if I put 1 into a split-dice-in-two and it was Counter 5, I could get locked dice even though it should've been two 1's.

Next I was playing Robot and crashed when, I think the enemy that gives random crystal weapons, got one saying "Gain a random blessing" and it crashed just before the AI was seemingly about to play it.

First episodes for each character could be more interesting I think, seems like they were just bonus round modifiers + new items, without much added difficulty. I wanted to play the 2nd-6th episodes of each character but was locked from that.

I was expecting a spooky ending, that was anticlimactic after the "I can see my village from here". I found the atmosphere of the game subtly unsettling and the music fits with that (that Pyramid Sands track was a good choice) so I would loved to have seen a short cutscene of a mirage village.

It was really nice to discover this game. I played Karoshi as a teenager and really liked it.

Besides the little glitches with the portal mechanics, I have a few design comments: