Yep! That's the trigger. It's just for show though.

The cow wants to escape! If you catch a glimpse of an entrypoint, that's where the cow needs to go.

Did you see the little clue in the gallery?

Very enjoyable gameplay loop!
Poison zones seemed to be the way to go. I set up like 7 and had one die dedicated to other effects. Was cathartic to melt those waves! 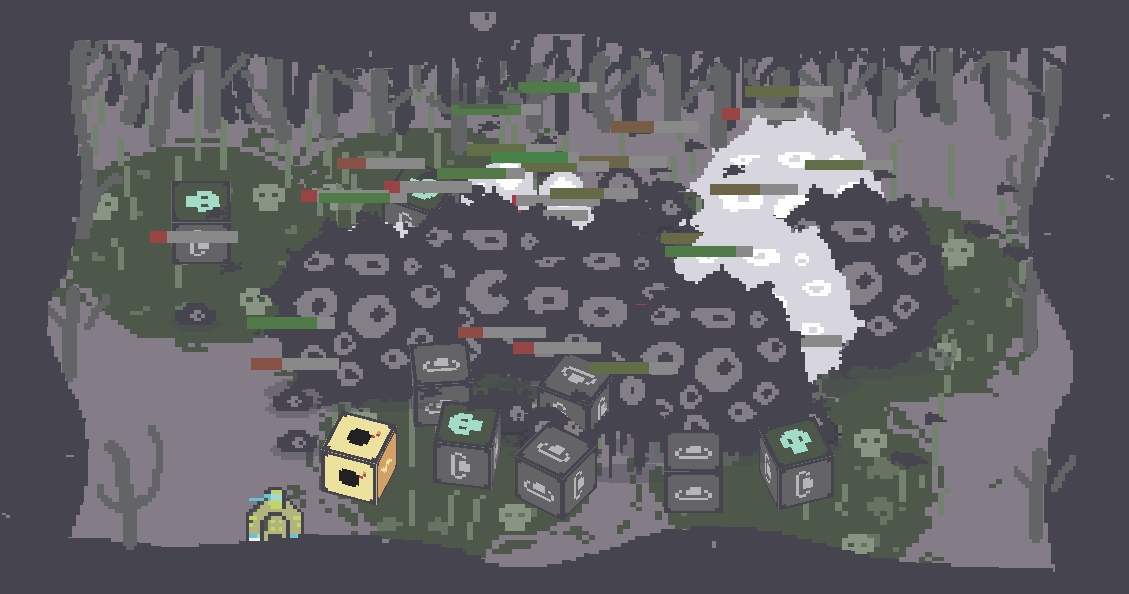 Thank you for the lovely art!

I'll write this down on the buglist, thanks!

Latest update is live! Includes various bugfixes:
-Winning the game with PRAY should no longer blackscreens the game
-The power of cuteness no longer overheals you in Hard/Monday Mode.
-Also, the main battle theme (MondayMania) has been updated, and is now even more awesome!

Wow! You actually got the disgusting burger! impressive!

The police give you 2 'arrest-on-sight' points.

Hello, thanks for the great feedback!

The original idea for the rating system for landing pre-emptive punches on monsters is that they take more damage the faster you hit them. Ratings like GREAT and WOW! didn't make the cut for the jam deadline, but will likely be added in shortly. Fighting a tanky/dangerous enemy would be made a lot easier if you land a pre-emptive blow that takes a third of it's health!

Thank you for the detailed feedback! Level 62!! Wow!

I really like the idea of a moment to breathe after a boss, with some relaxing music and a shot of our hero chilling, I'll remember that!

I also wonder if 100 rounds is asking too much from a player for a single session. That's SO much mashing. Maybe as an endgame final circuit. For new players, 20-25 rounds might be enough.

Thanks for playing, bud!

You'll need to open it with an emulator. Visual Boy Advance is my recommendation. Google it and you can download it for free.

Game has been updated! Some softlock problem areas in level 2 have been fixed.

Having a .gb being playable in a web browser is a feature of GB Studio, the program used to make this game.

Thank you for the thoughtful review!

We've added a screen showing the web controls. (XBOX ONE controllers are supported and recommended for web play!)
Also, the player now has two jump heights! Tapping jump will produce a shorter jump. Should make the platforming feel a bit better.
Cheers, thanks for playing!

That's just the way GB Studio has it mapped out. If you play the game on an emulator, you can change the controls to your hearts content!

There's no two ways about it - this is the hardest jump in the game. You can easily get to the bottom dissolving block by wall jumping off the pole to the right, but getting to the 2nd block is tricky. I find I do it best if I don't even think about it

looks like we need to call the fire department

This is the most stressful bone in the game imo. You get 1 shot

You are a champion

Are you on PC? Maybe try a different web browser.

On keyboard it's Z and X

You are dog. Your friend is missing. Find them. Hurry!

I had lots of fun! Very cute how all the enemies were themed.

I like the tiles you made for the crypty setting.

Really love the look of this!

Hullo Daan, do you have an e-mail address I could message you at? I'd like to ask you about maybe commissioning something from you.

Or feel free to send me a dm on Twitter @LumpyTouch

It's a bug currently. As it stands, to trigger the final boss you need to DIE when day 0 begins. Give that a go and you can fight the big baddie!

Very fun game! I liked the mechanics, and enjoyed the curve-balls that the game threw at me in terms of challenges. Very well done!

Popped quite a few astronauts in outer space.. oops.