Hi! Thank you for this fun game 😊
I published a French translation here: https://lucas-c.itch.io/world-of-dungeons-turbo-breakers-fr

Thank you for your warm feedback 😊
I'm really glad you liked the game.
I started working on a new PDF game and your comment motivates me to go on!

An excellent tactical shooter! A bit like Hotline Miami.
It gives you this feeling of "it's hard but I can beat it, let's just play one last game..." 😄
Knowledge of the power-ups & enemies is also vital in order to judiciously pick the right weapons to face the next level (damn spiders), which means you get better at it the more you discover the game, and I like that!

Fun indeed, but same problem for me:

I really liked your game, thank you!

The gameplay is fun, original, simple but very efficient!

The music is great, and I also loved how you used some storytelling to explain the "2 extra jokers".

In my experience, for any progression level, the map layout has a HUGE impact on difficulty. It's nice that maps are partially generated with some randomnes, but maybe this can make some levels really unsolvable, for example due to a canyon in the middle of the map, splitting your troops. That's a bit frustrating sometimes, but I really like the game overall!

Excellent short game.
Exactly the kind of original gameplay mechanics I love,
with just right level of challenge,
and every game session is short enough that you immediately want to play one more again! 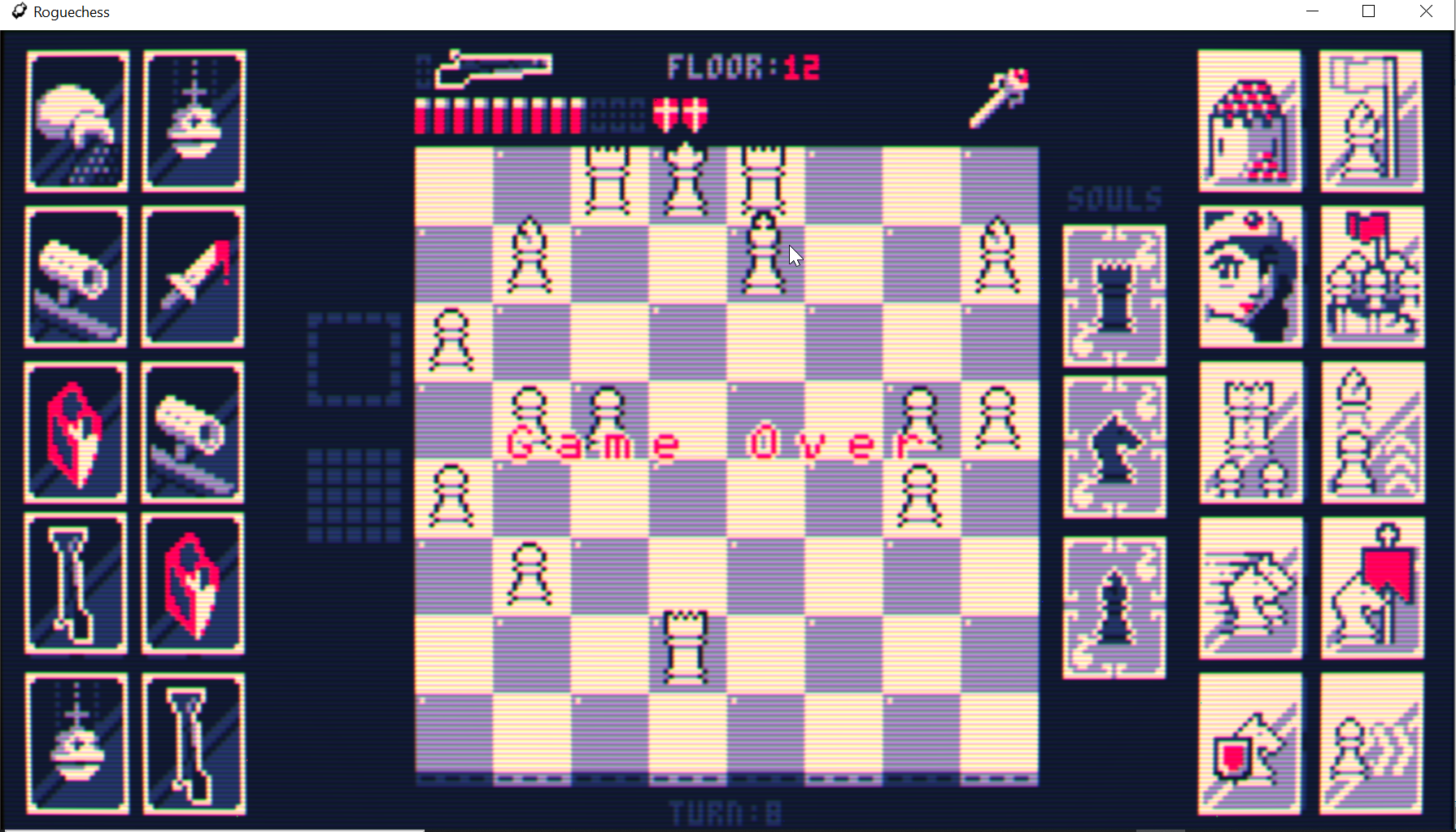 One minor detail : when you  are "check" at the beginning of a turn, and you have the ability to play another action after a soul move, soul moves leading to a "check" position are forbidden, while I should be able to escape the "check" on the extra turn
(not sure what version of the game I played though)

The battle-grid sector that decimated our batalion: 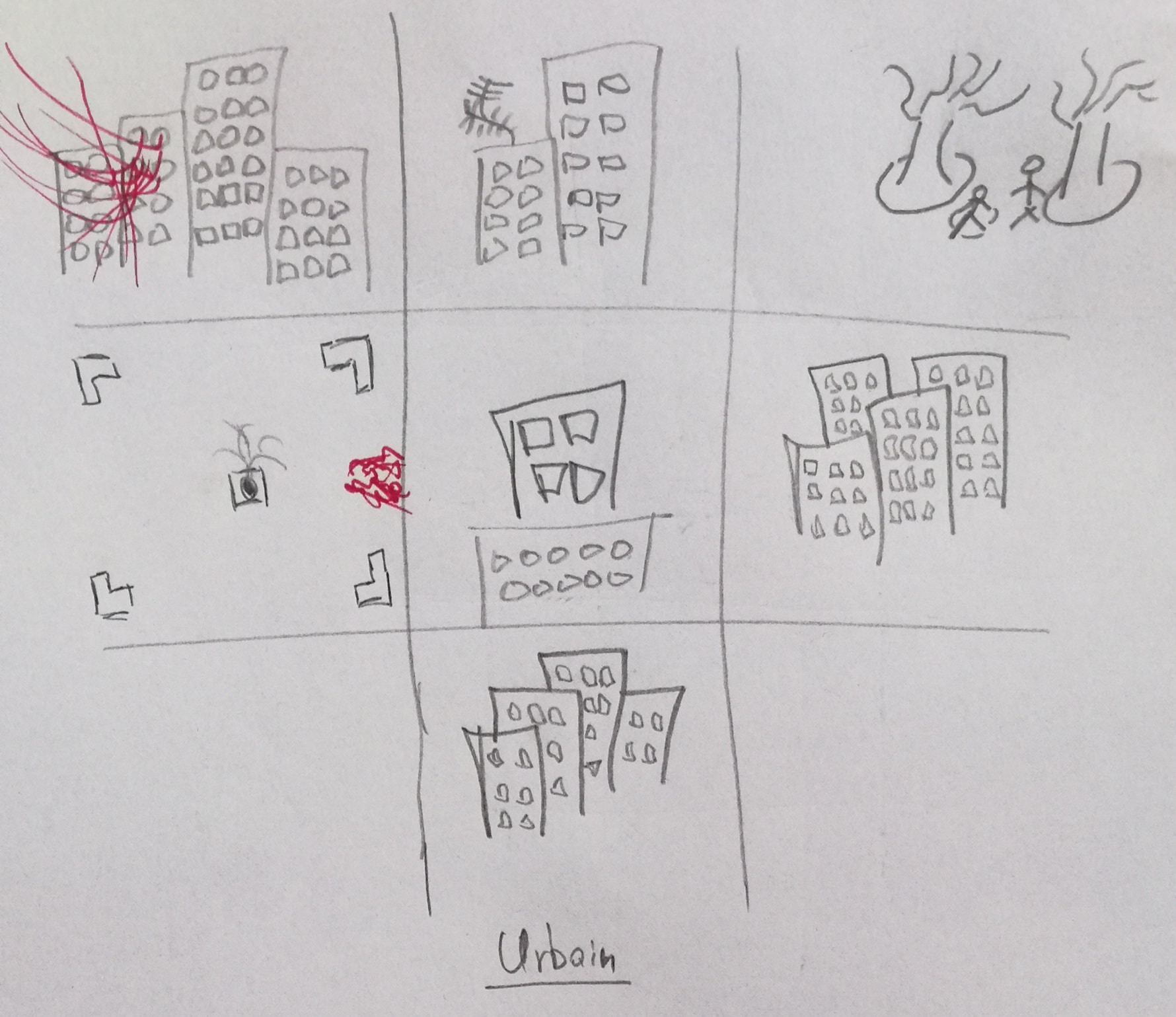 We played that game 2 weeks ago, here in France, with 2 friends, and we had a lot fun! The game mechanics are well balanced. I never played X-Com but my friends did, and apparently the game is as hard and punitive for the rookie troopers as in the video game ^^

This game reminded a bit of Dungeon Heart in its gameplay.

Thank you for publishing this, I really enjoyed this 2-3h game session.

I have only played the Heist mission so far, but I haven't finished it:
I managed to solve the first part with the hostages, but later one, near the boat, I rewinded time too much and "broke" my initial solving of the "heist" situation. That was quite demotivating... Could it be possible to add a "saving" mechanism, either manual or automated at some given checkpoints?

OK, I realized I could move past the boss cadaver, but then the game crashed a few seconds after passing the last door 😢

Interesting! The practice dummy is awesome, but I've beaten the game without ever using the everlasting truffle nor the scythe.

First time I played it, I did not expect much. I played a few runs, for a bit more than an hour, than removed it from my computer. But then, a few days later, I wished to play it again... And now I think I finally beat it!

Congrats and many thanks to the dev team 🥳

I cannot advice you about compatible PDF readers on Mac right now, sorry :(

However I'd be really happy to have your feedbacks if you test the game with some OSX PDF readers!

Many thanks! Should be merged in a few minutes

Thank you for your kind words

Thank you sir!
All those financial & verbal feedbacks motivate me a lot to create more games!

I used your "torch on wall" sprite in my game: https://lucas-c.itch.io/undying-dusk

Visually amazing! And the levels are great!
Some jumps were tricky enough to feel a bit frustrating.
But I really enjoyed the game overall, thank you!

Thank you for sharing those instructions!

If I recall correctly, "t" can also be used instead of ALT+<left arrow> to "rewind time" in the game

You are using Sumatra on linux? Maybe try a more recent version then. You may have to compile it if no binaries nor packages are available though...

This table list PDF readers compatibility with the game:
https://github.com/Lucas-C/undying-dusk#compatible-pdf-readers

Feel free to open an issue on the GitHub project with more details on the PDF readers you tried to open the game with.

8GB of RAM should be enough!
What version of Sumatra are you using? Version 3.2 contains a bug, but the previous & upcoming versions should be OK.

I tried again today, and I've finally beaten the last level!
Thank you for this great game 😉

Also, Technoir Twin Cities Metroplex could be a nice companion to get inspiration for some missions.

I loved it!
Really fun, with right level of difficulty and quite original!
The last level was challenging but it was nice to never have to restart it. Good job really, very polished and interesting levels!

I really liked your game, but I have been stuck on level 3E for hours! To beat it I even tried to load the game in PuzzleScript+ editor and run the solver, but that did not work...
Congrats really, I enjoyed playing it very much.

Thank you for the heads-up!
Just a note : the link provided point to an image asset, while it should probably point to https://store.steampowered.com/app/1280750?snr=1_614_615_thebigadventureevent_16...

Excellent game !
I had a lot of fun playing it :)
Thank you!

Wow, great news !
I'm especially eager to see some of those changes : the expanded forest, the safe haven and the new co-op interactions !
Best of luck ;)

I really liked your game :)
I have just written a review of it on myblog : https://chezsoi.org/lucas/blog/ (in French)
I take the liberty to give you some feedback here.

I played with version 1.0, and I see that in v1.1 you've removed the mention of "Intel Report" that intrigued me :) However I don't see how you revised the Hide move, as mentioned in the release note ?

A couple of details on the rules clarity : at first we draw hexagons with sharp corners above & below, instead of on the sides, which makes the zone mapping instructions hard to follow ! I don't know if it's a detail worth mentioning. Also, it wasn't clear that the MC had to roll for RECON, so the first time the operator entered an adjacent zone the MC roled only SCAN & SIT REP, no RECON.

About difficulty balance & game strategies : the rule specifying that the Operator cannot HIDE again until all active threats in the zone are dealt with is nice, because it is "realistic", but it also increases the difficulty level and encourage the tactic to never enter zones with threats & just keep performing SNIPE & HIDE moves from adjacent, "cleared" zones. Also, BRAWL seems to be always better than DODGE as the target is taken out in case of 3-5 ! And finally, to me, advanced gear can be split between "very useful" (Autofire & Knockout Gas) & "not so useful", that should be kept to be dropped.
I may be missing a game strategy though, as I found the game quite hard to beat, even with those points in mind.

Finally, a few suggestions : on the agent tracker, a single checkbox for "used / dropped" could be enough and would make clearer that both cannot happen for advanced gear.
The SIT REP table is really nice, but I'd love it if there was a bit more details on threats to feed players imagination... Reading "Specialist" or "Commander" is less inspiring than a psychic with a gas mask or a ricochet genius colonel with a white mustache ;)
I think there would also be some space for another MC move dedicated to supporting the Operator. Maybe give the MC a choice after an area is cleared from inside, for example one of :
- provide some gear to the Operator
- identify the mission goal location (a single zone) or nature (NPC, item, sabotage...), knowing that both are needed
- get another tactical advantage (+2 forward ? +1 in next zone for a move ?)

That's it ! Thank you very much for writing this game & releasing it here !

We played it with a friend this morning and I really liked the artistic direction and the gameplay !
The alternating cycles, the combination of resource gathering and fighting mechanics, the interesting boss fights... Really fun ! Good job !
I think I'd just love some more storytelling around the characters...
Do you plan to greenlight it on Steam ?
I'm not a Discord user, but I'd like to be notified when the full game is out :)

Seems like a nice game but I couldn't go very far due to the lack of constrast: I sincerely cannot see the walls in such darkness. I don't know if it's a bug, a lack of luminosity control parameter to adapt to different screen lightness, or just a design choice I don't fully appreciate ;)

I did hold SPACEBAR sadly :(
I just tried again to be sure.
Also, good job on the music, I really like it !

I couldn't cope with the N64-like rigid gameplay, but I really liked the twist you've done on Goldeneye ! It made me jump a little :) Very creepy, awesome job !

Nice looking game !
I just want to report that sadly I couldn't go very far due to a bug... The yellow lines do not work !
When I go forward and jump on them, I cannot "grab" them, even if the hand icon flashes quickly.
There is a screenshot :

I really wanted to see if this had an end, so I wrote a Python script to fast forward ^^

Also, it made me think about Turbo Media comics : https://www.catsuka.com/turbomedia/