Gosh, thank you so much

Anti-Desert is a roleplaying game I've been working on for a while now.  This free playkit is effectively a condensation of some of the mechanics and ideas of the game into a much smaller (maybe 1/6 or 1/7th the size of what I eventually intend to produce, which I've written all of so far but need to do layout for) document so that people can get a feel for the game without paying anything at all and follow the rest of the game later on if they'd like.

The idea of Anti-Desert is a sort-of climate "post-apocalypse".  It's not really a post-collapse scenario, the world hasn't fallen apart completely, but it is a world in which drastic action was taken by extra-state actors to put an end to carbon emissions, and these actions have had far reaching effects for the people of the world, who are struggling but also thriving.  It's a game about degrowth, that is, building sustainable ways of living without massively lowering quality of life in the ways that matter (i.e. ideally, everyone gets to eat and everyone gets the medical care they need, but maybe you don't have as much access to video games as you used).  It's also about community building and solidarity outside of the state.

All these ideas are encoded into the language of a mecha story.  There are huge beasts and machines that have appeared across the UK and they have chosen pilots to guide them through the Age of Legends.  They're capable of larger-than-life actions, and use their powers to rebuild infrastructure where it has fallen into disrepair, or to build new infrastructure where none was left after the Upheaval.  The mechs are fluid, imperfect and improperly defined things- they exist in an inbetween state between reality and fiction.

Mechanically, this game is sort of the culmination of a bunch of ideas I've been developing over smaller projects over the last couple years.  I'm hoping to make it seem as natural and un-game-like as possible, whilst still creating something you can play and experience.  There's a heavy emphasis on microfictions, poetry, rituals and writing that blurs the line between the world of the game and reality.  The game isn't real but, that doesn't mean there's nothing to take home from it. 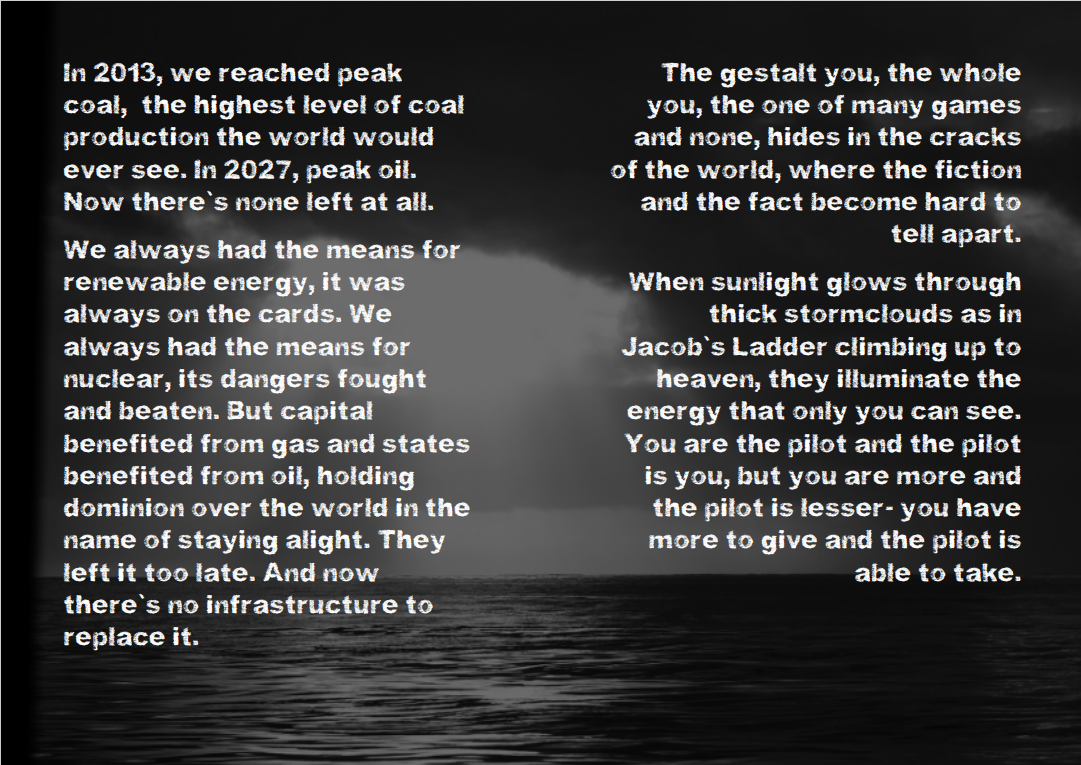 I opened this game and shrieked.

I'm so glad it helped! I hope your new name works well for you!