I've finally got an almost playable version submitted now - my first game jam and it's been a great learning curve, forcing me to get something out there where normally I would spend days and weeks going round in circles fiddling, trying to get details just right or implementing complex features that I probably wouldn't end up using anyway..

I added some music today to give a bit of atmosphere but almost every aspect of the game needs some polish - but it's a start and I'm pleased with that.

The gameplay is rather crude, all you can do at present is collect 6 hemlock plants and create 2 medicines in the cauldron. On giving the medicine to the creature, the game abruptly ends, or alternatively if the timer runs out.

Would really appreciate any tips or pointers you guys can give. Like i say, it's been a crazy steep learning curve.

Not sure if I'm going to get this finished in time as I haven't got much spare time to work on it, but I've already learned loads along the way. I'm very new to game dev, so it's a steep learning curve.

The idea is inspired by an old ZX Spectrum game called Feud where two sibling wizards collect herbs and cast spells in an effort to defeat one another. Also wanted to reference the Complete Herbal by Nicholas Culpeper, whose text is a fascinating window into an age when healing was far from the evidence based science it is today, but was nonetheless a milestone on the timeline of modern medicine, by making medical information available to ordinary people.

The game is set in a quiet corner in European woodlands in the 17th century, five years after a terrible war, since which the land has been plagued by failed harvests and disease.

Wise yet eccentric healer Nicolas, renowned for his ability to find and combine healing herbs, discovers a strange creature in the woods near his home the morning after a bright light was seen falling from the sky.

Nicolas lives outside of the village and has an uneasy relationship with its residents, owing to his odd appearance and habits. He brings the creature back to his clearing and must use all his skills as a herbalist to find a cure for the strange visitor's ailments, whose health is steadily declining.

Nicolas knows not why nor how, but senses that saving the creature will lift the malaise that has settled across the land, and perhaps even return good fortune and health to its inhabitants. But of course, when one meddles in mysteries, even the best intentions can unravel in unfortunate ways!

My plan is to create a playable prototype including herb gathering / inventory mechanics.

Other features I'd like to implement but won't have time include: 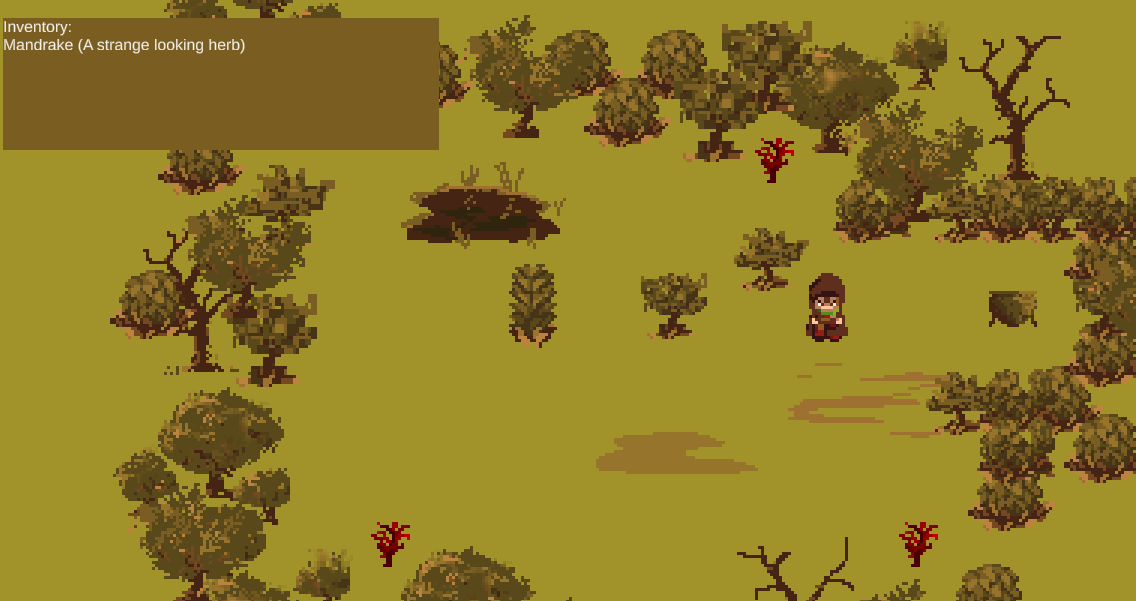 Hope to post a couple more updates here before the end of the jam.