Updated with links to Ed's SoundCloud and the game OST.

thanks! I hope you had as much fun playing it as I did making it :)

Interesting. Thanks for the reply! :)

Thanks for playing! That is a very specific piece of feedback, and if you have the time, I would love to hear more details.

Could you describe what makes levels 3 and 5 difficult?

This game changed my life

Jk but seriously though good game, basically "getting over it" but you're a bouncy noodle.

thanks for playing and for the feedback :)

thanks for taking the time to play and give me feedback 😎

Procedural levels would be pretty sweet, I  will definitely add that in future iterations.

For the bullet ricochets, I can try adding some more values for things like "chance that this bullet will ricochet normally", and play around with the bounce angles. I'll make sure to do some user testing on that. Thanks for the input!

hey thanks! Yep that is, in fact, a mechanic. I've received this question before, which tells me that I didn't do a good enough job telling that to the player. Thanks for the comment :)

thanks for playing and for the feedback! I intended for the game to be challenging, but you make a good point about being more mindful of difficulty preferences. Next time maybe I can add some difficulty modes or a better difficulty curve to ease players into the more challenging levels.

Thanks for playing + feedback :) I will keep the movement speed in mind during future iterations and play testing.

I mostly used the dash to continue moving in the same direction, good to know.

This is a cool game. Great audio and visual feedback. I liked the inertia on the player which fits "out of control," but I wish you could move a little faster more quickly.

I like visual and audio in this game, although I wasn't really sure what was going on. I got stuck at the bottom of a long fall after eating two pellets and getting stuck in the gray world.

Great use of the theme! I think more levels - and some more challenging levels, later on - would really make this game shine. Also sound! The visuals are fantastic, and the screen shake on every "update" feels really good. I'm dying to hear some sound effects and music on this game!

This is a nice start, but I think some design improvements would make this game really great; heres some things to consider:

* the red/sun form feels pretty bland in comparison to the blue/moon form, since the moon form has darkened view, revesed controls, higher jump, and can see hidden passages, but the sun form can only run and jump. Maybe the sun form could be given some cool abilities too?

* I reached a dead end in the underground section where I couldn't jump high enough as the sun form, but even after waiting a long time I didn't turn into the moon form, so I was stuck.

* As the moon form, you can't see where you are jumping down to in some situations. This causes the player to make a blind jump and hope they don't fall into a pit.

* since running and jumping is the bread-and-butter of the game, the bug where you stop jumping if you bump a wall mid-air is pretty distracting.

I liked the music and level ideas, River Styx was cool :)

This is a really cool idea! I feel like the gameplay gets a little repetitive after a while, so maybe some kind of cool powerups or random events could be added to keep things spicy.

I think the two greens are a little too close to each other in hue/value. It wasn't easy to tell at-a-glance which green a puzzle piece was. I suggest making one darker/brighter or changing the color so they are immediately distinguishable from each other.

Awesome graphics, so cute! I think the random effects on-hit are a nice touch, but didn't make me feel "out of control" since I could still aim & shoot pretty reliably. Maybe some effects could be added to on-shoot as well, to push the idea further?

Cute robot, I think it needs some design improvements since the main mechanic is "you temporarily cant move" and the main enemy is "touch this and you die"

cool and quirky idea :) I like when the "out of control" triggers, the sound effect is a great touch.

I think the enemies could be balanced a bit better, it doesn't always feel fair when you end up in situations like this: 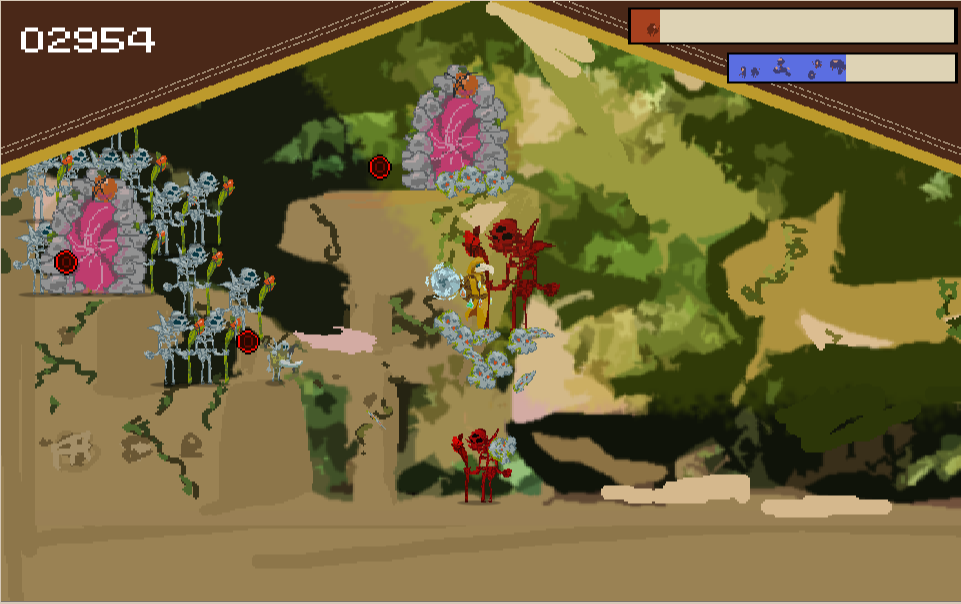 Thanks :) I worked hard trying to add as much player feedback as I could

Thanks! Glad you thought it fits the theme well :) maybe I can add a powerup or something in the future where the "randomness" is disabled for a brief duration