Unfortunately I do not use any Linux distros at the moment… so the Linux build is more of an experimental build and I can’t actually test it out myself… this offline app is currently only getting 100% support for windows 10 and newer.

Oh wow you totally pulled inspiration for that hook from the “Avatar the Last Airbender” intro lolz! I love it yo!

Yeah the OC’s website will be completely shutdown pretty soon according to their notice on their website, so this will be the only way to use this after its shutdown completely. The OC said something about it was costing them too much money to keep it live on the web so they’re shutting it down. As far as what’s different, not much is different except for the fact that this is an Offline version and the soon to be dead web-based version requires internet access to use. I made this with the latest version of the website’s code so its up-to-date with the latest web-based version’s features.

Edit: I just noticed you were referring to v0.14.0, and I honestly have no idea if how much was changed from v0.14.0 to v0.15.0, but I do know the code on the GitHub repo had some majorly outdated NPM dependencies that was making the build fail but I was able to solve that and I got it to build just fine after some version conflict investigating.

lol I had to do a double-take to make sure I actually put 5 heart emoticons instead of 4 on accident hahaha LOL! I don’t have enough coffee in my system right now to count properly lolz!

edit: BT Dubs, the 5/5 Hearts rating I gave above is meant for the entire Asset Bundle I bought this evening. I LOVE your art! I’ll def be buying your Sprites more often now that I found your art!

Oh heck yeah! I LOVE these character sprites yo! Def using them in my game! I’m looking forward to the rest of the monster sprites + battlers sprite sheets for sure! I bought the RPG Retro Assets Bundle this evening just before heading to eat dinner. Now I’m adding them into the game! they look super cute!

If the resolution is still a bit “off” for Desktop Browsers, please let me know here.

Love your Voice Acting skills! I’m definitely adding them into my games from now on. I would most likely be willing to do a game collaboration with you as the voice actress for the characters in the game sometime. (if you want to do that, I mean) I would be willing to pitch in some extra funding when I have the extra funds from my Game BGM sales and game sales too. You have quite a talent for capturing the “feelings” behind a female character’s voices. I’m looking forward to your future releases!

No what? Not sure what you mean by “No”. If you could elaborate I can try to do better on my future releases on the parts you didn’t like.

Also, I sent you a friend request in Discord a moment ago. I'd love to chat with you about game design and game art if you're cool with that.

hello, @Szadi! I'm one of your itch io followers. I had a bit of a request for your tilesets on itch io. could you release 48x48 versions of them for devs who use the RPG Maker MV/MZ game engines? I noticed the largest sizes you have is 32x32. if you could do add a 48x48 tileset size option too, that would really help me out a lot. I really love your art by the way. very pretty and vivid for pixel art.

thanks for replying, Pipoya sensei. I'll talk to my team in our Video Chat Meeting today and I'll make a list of idea for you to experiment with. We just gained a 3D Modeling and Rigging specialist so we will be doing our games in 3D from now on, but I still would really like to help you with project ideas Sensei. If you need any ideas for projects, I would be glad to send you a list of ideas anytime!

Thank you for your hard work!

Also, I followed you here on itch. I look forward to seeing what else you create! ゲームアートを作ってお陰様で、ぴぽや先生！

Pipoya, I love your auto tile sets for Fang! Do you think you could make a Cyberpunk/Sci-Fi themed Type1 auto tile set for Fang too? My team and I will send you a free copy of any game we make using your tilesets for sure! 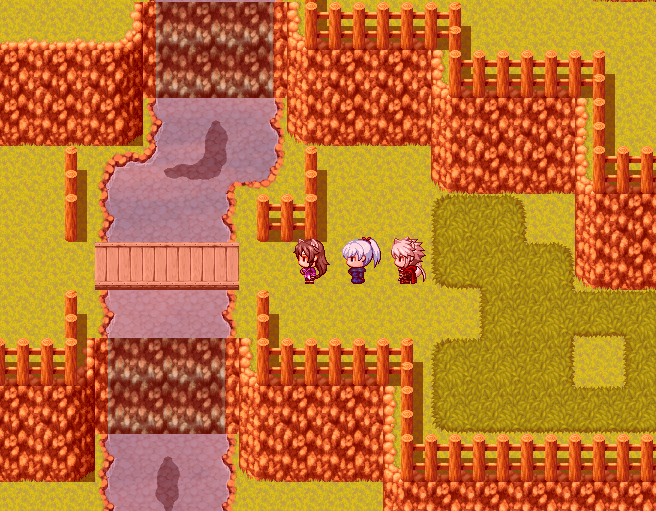 Hey all! Kurochan here with a progress report on our map remodeling!

I was chatting with Driftwood Sensei about the Pros/Cons of using Parallax Maps for all of the maps in a game, and after chatting with the team about what he told me, we decided to drop the Parallax Mapping idea and just redesign the maps in MV instead. We want to eventually release our games for Android, so we can't use Parallax Maps too much if we want to keep the package size small enough for mobile devices. Anywho, our Maps aren't going to look like a simple RPG Maker mapping style though since we're using elevation changes and atmospheric sound and lighting to make them feel realistic and immersive. We are editing the MV Tilesets (like the water tilesets) to allow for the clouds and sky to reflect off the water via the water's Alpha Channel being a transparent blue over a sky parallax image set to scroll. We think you're really going to like what we've done to the maps! I attached an example screen clipping of the Faymere's new look, but its still a work in progress so it might look a bit different next time. (Though not much different.)

We hope you'll patiently await the release of the 2nd stage release build of this demo!

Keep an eye out for our future progress reports!

Kurochan here with a progress report!

> Demo Quest Story Plot has been finalized and I'm in the middle of programming it right now.

> The Battle Mechanics are in the Design Phase still though.... can't really decide on a system that agrees with me yet.... BUT, I think I'm getting close!

We want this game to be fun to play for everyone, so we're putting plenty of effort into the story and visuals to make it enjoyable. We would really like to hear your feedback on this demo to make our games more fun for all! Leave a comment on the download page's comments section and we'll try to put everyone's feedback to good use!

Thanks for checking out our Games and Demos! More info to come!1