I'm not the Jam-maker, but I did get this reply to my similar question:

(Oh, and according to a tea-sampling table at Anthro New England, everything from tapeworms to cabbages to a sentient pair of pants could be a fursona. So you're good in terms of expanding beyond the animal Kingdom. I mean, if that one table is representative of furrykind, at least.)

Something more like Animorphs. Our protag becomes different animals and takes on their accompanying instincts.

Also: would human characters who take on animal-like characteristics count/quailfy?

Hmm. Not sure if I tried right-clicking.

If you can, add a UI back button to the journal books, too. I am able to back out of those by hitting backspace while my photo album's open, but I figure that's not one of the game's puzzles ;)

"Bought the files" includes "Bought it in the Justice Bundle", correct?

This library looks perf for me, jsyk. Thanks for putting it together!

I seem to be having a bug where I can't exit the computer terminals. I can perform all the required actions on the Veritas Labs' terminals, can take a photo or observe my inventory, but the backspace key isn't working. I end up having to reset my save and play the game over again, carefully avoiding clicking on any computer terminals. Any suggestions, or should I just ignore the computers?

Aw. That was just... nice. The music reminds me of the WTNV music by Disparition. The visuals are lovely and the worlduilding's pretty great! In fact, I'd've liked it to be longer, to see more from all these other monsters along Vil's route and what else is going on in the world!

A few things struck me as unusual choices that, if the devs are still watching this page, I'd like to hear more about!

(Mild spoilers ahead for anyone perusing the comments section)

-The punishment salt baths - Vil has the option to linger at one and the next day we see the remains of either three or maybe one-but-jostled - seem like they should be leading to something.  Are these for worldbuilding's sake or do they tie into a route I haven't found yet?

-How did you decide on this layout? You commented below about the prose-heaviness prompting a change from the usual VN layout, but why have the prose on the left versus the right side of the screen? I often found myself so sucked into the prose I forgot to glance to my right to see the monster boys' cute expressions!

-Interesting that the choosing a route happens sequentially rather than all at once ('Yiestol or not? > Brettan or not? > Nyargh or not?' vs something like having Vil finish the salt route on Day 2, offering the player the chance to follow up with 'Yiestol or Brettan or Nyargh'). I kinda ended up doing Yiestol's route first because I felt bad skipping out on him - which I bet would've been true no matter who we encountered first. Can you tell me more about this decision?

Well those are gorgeous

Windows 10 does tend to get suspicious when I download itch.io games, but this is the first time my antivirus has stepped in. This is the message I'm getting:

And when I view details: 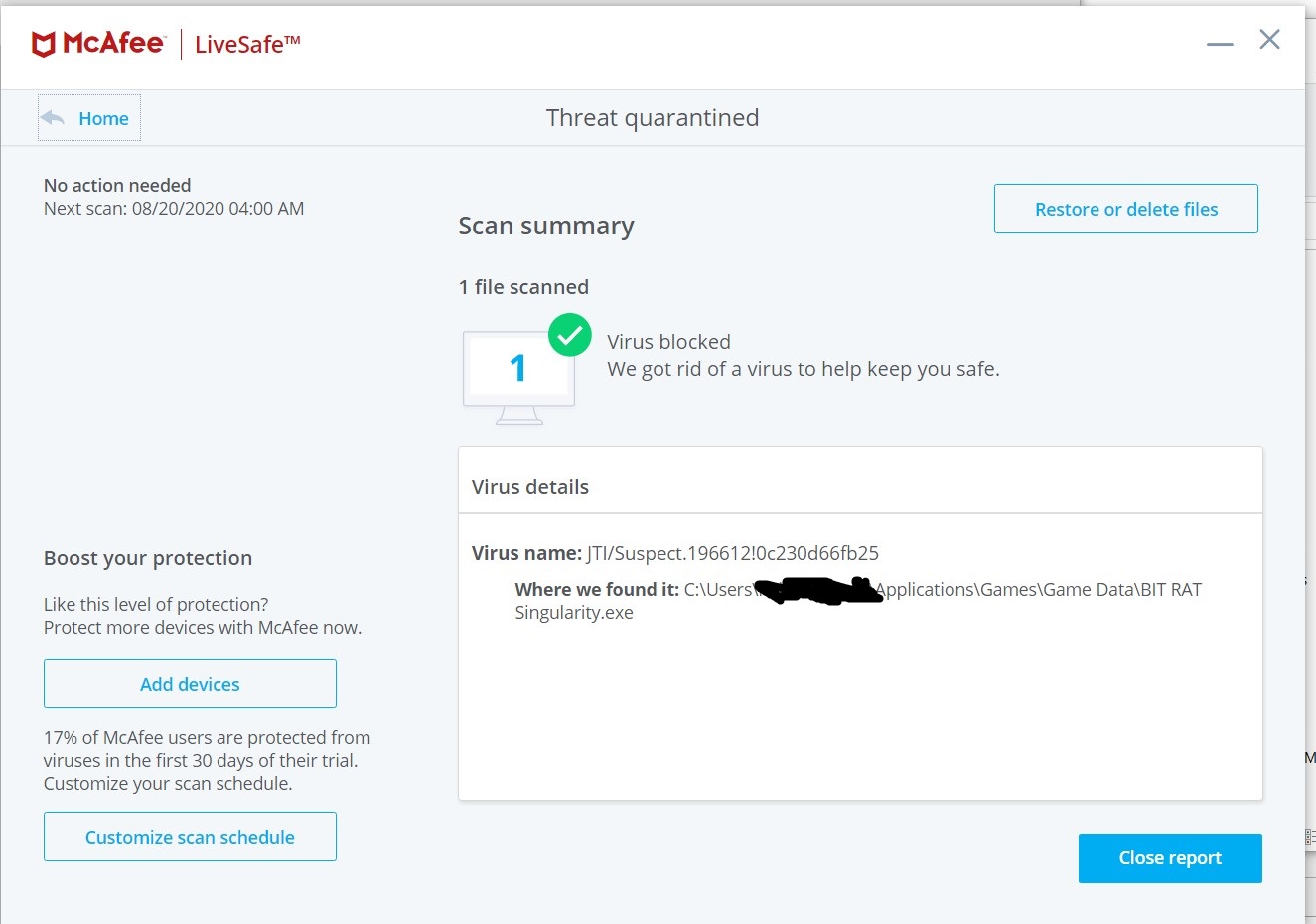 (Sorry for the huge images; I also honestly don't know if it's unsafe to leave my file directory visible, so forgive me for playing it safe)

Anyone know why I'm getting this? Is part of this file insecure?

Cute! Got this with the Racial Justice and Equality Bundle. Puzzles vary between easy and devilishly difficult. Brevil, as mentioned below, is tough enough that I had to track down a walkthrough for hints. The nuclear waste music is the best.

My only issue is that the 2-tile long snakes and the two-headed snakes freak me out. Poor sneks!

Ditto. On the sectioned off level moving platforms. I glitched through the wall and ended up in the void

I think some of it is how the rotators work. I noticed when I got stuck on L11 that the result would flip between two or three patterns of motion, usually changing around the rotator block. Of course, there's really only two types of blocks for L11, so it might be anything

...you can move the grey blocks?

*throws up hands* Man! I was stuck for ages on L11 because I thought the immovable grey blocks were immovable!