Doki Doki Dollmaker will be available on PC only via itch. There are no plans for a mobile/Android release in the future, but if anything changes, I’ll be sure to let players know on this itch page and on Twitter @DokiDollmaker as well. 😊 Thank you so much for your interest! I’m happy that you’re excited for the project. We’re working very hard on it!

Thank you so much for sharing. 💗 We’ve been working very hard on the full release and hope to bring it to you soon. I’m happy to hear that you like the concept and characters; your enthusiasm is greatly appreciated! ☺️

Of course! ☺️ Thank you for your patience and support. 🙏

I appreciate your anticipation for the project! Here’s what’s left to be done before release (as far as programming goes):

Another artist, bemicat, has joined the team to help us catch up with CG production, which we were behind on. Editing will be 60% complete by the end of next month. We don’t have an official release date at this time, but will communicate it with players as soon as one becomes available! 😊

There are no plans to release Doki Doki Dollmaker on Steam at this time, but if anything changes in the future, I’ll be sure to communicate that with players. Thanks for your interest! 😊

You’re not doing anything wrong! The “Buy Now” option does not work at this time because there is nothing to buy - the commercial version of the game has not been released yet. The full version will become available next year, alongside an extended demo; I hope you’ll look forward to it!

Thank you for your support. 💗

Thanks for trying the demo! I’m so happy to hear you’re excited for the full release. Feel free to follow the project on Twitter/Tumblr to stay up-to-date with the project’s progress!

Thanks for checking out the demo and sharing your play through! I enjoyed watching your video; the commentary was entertaining and I caught myself laughing at many of your responses. I especially enjoyed your reaction to the dolls! Kahvel isn't often a first-choice, so it was cool to see someone gravitate toward him like you did.

I sincerely appreciate your kind words about the project and would love to watch your full play through someday!

I'm glad you enjoyed playing the demo and are excited to learn more about the characters! Although the story is fairly linear (with choices affecting specific scenes, dialogue, and endings), I'm sure the unique moments with each doll will make your repeat-plays equally enjoyable! If you've fallen for all five dolls, you may want to aim for the "full group" good ending - it's difficult to obtain, but the bonus scene is worth it.

Thank you for your kind words about Lyle's character and the story. Doki Doki Dollmaker is romance-focused, but it's also a coming-of-age story. Lyle is trying to adapt to his new environment, cope with loss, and learn about himself as he enters a new stage in his life. You will find that his relationships with Cole, Tilly, and Mr. Mendoza can be just as important to his growth as his relationship with the dolls. I'm happy to hear that these aspects of the story are a welcome addition to the script!

Thanks for downloading the demo and sharing your play through! I already mentioned this on Twitter, but I laughed every time you lovingly scolded Lyle, calling him "child" - too cute! I appreciate you sharing your video here on itch as well for those who might have missed it. Happy to have you as a backer on Kickstarter and looking forward to seeing more videos in the future - thanks for your support!

Thank you for continuing to follow the project throughout its years of development! I'm happy to hear that the demo was worth the wait for you and hope the full release will exceed your expectations. I will continue to work hard and make Doki Doki Dollmaker the very best it can be!

I appreciate you sharing your experience playing the demo; it brings me so much joy as a writer and developer to hear that I've been able to make you laugh! I also love that you were able to connect with the characters the way you have. Although I can't guarantee that you'll be able to brush Desifer's hair in the full version, I can promise that there will be some surprisingly wholesome moments with him!

Thanks again for playing the demo and supporting the project! 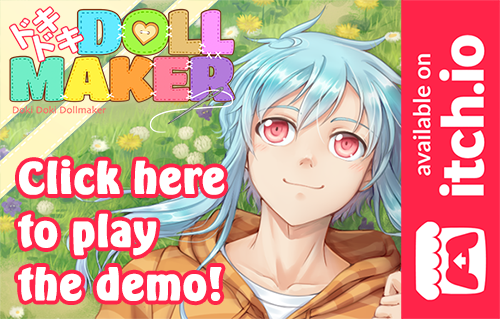 Doki Doki Dollmaker is an in-development boys love (BL or BxB) visual novel. Make decisions on behalf of Lyle to steer the story in different directions and experience multiple endings. The full game is scheduled to release at the end of 2021, but you can try the demo right now to begin the story and meet the characters! The demo was created alongside a Kickstarter campaign to help fund the completion of the project. Please consider checking out the Kickstarter if you are interested in playing more!

Nothing lasts forever – at least, that’s what young Lyle has come to believe. Forced to move away from home with his older brother, Lyle finds himself in a new town, far away from a painful past and heading toward a lonely future. When he finds comfort in making dolls using a mysterious sewing kit, he soon discovers that his life will be anything but lonely! Be immersed in this heartfelt tale of love and discover what it means to find yourself, no matter who, or what, is willing to lend a hand! 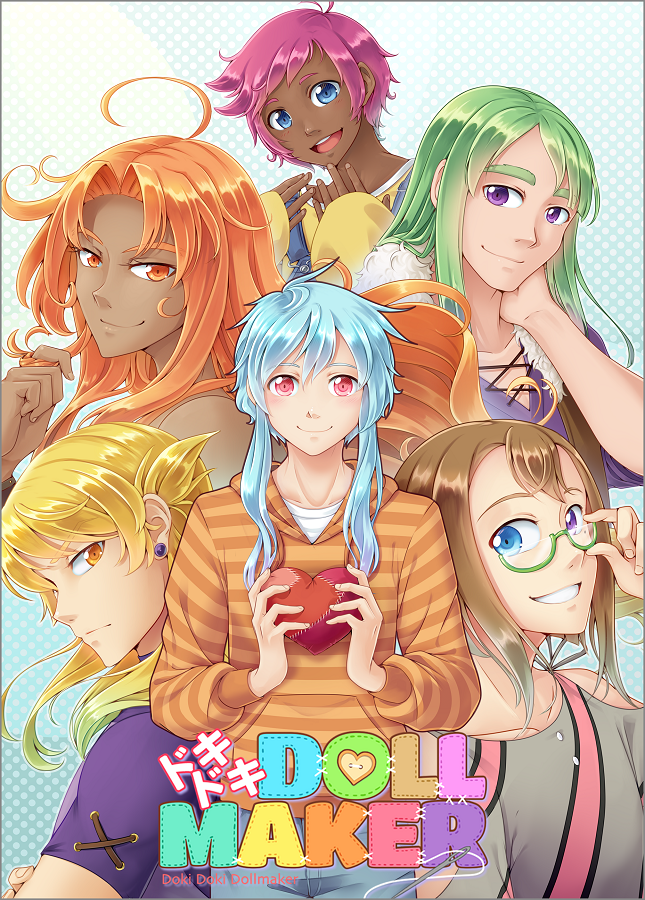 Lyle (the player-character) must move away with his older brother Cole after the sudden and unfortunate passing of their parents. To occupy his mind during the long road trip to their new home, Lyle makes five plush dolls using some leftover materials found in an old sewing kit. Due to the magical properties of the sewing kit and Lyle's cry for help (brought about by loss, unfamiliarity, and bullying at school), the dolls come to life!

The narrative focuses around Lyle and his relationship with the five dolls. He has a lot to teach them, but there’s a lot he can learn from them too. This heartfelt love story is also a coming-of-age story with several overarching plots; Lyle must adapt to his new environment, cope with loss, strengthen his relationship with his brother, discover his sexual orientation, and overcome gender stereotypes, all while teaching five curious dolls about the world. His relationship with the dolls is a complicated one. After all, he plays multiple roles: creator, teacher, and companion. He wasn’t planning to add “boyfriend” to that list, but who knows! Will it be love at first stitch?

Could Lyle fall in love with one of these dolls turned human? It's up to you! The choices you make along the way will affect the outcome of the story. Enjoy expressive character sprites as you make decisions on behalf of Lyle and unlock beautiful CG images along the way!