PONGG
A clone of a game you've probably played before!
NK
GIF
Fragment
a bullet hell for GBjam6
NK
Shooter
Dead Mall Side Scroller
Entry for My First Game Jam: Summer 2018. The thirst is real.
NK

What stood out the most to me about this game is the art and the music. I got caught a lot, but the game play feels fluid. I like the apple (is it an apple?) throwing mechanic, as it gives you a chance to outrun the orcs, though I kinda wish there was a counter to tell you how many you had left.

The game stopped when I got captured on mission 4 (I was playing on Browser, not sure if that is a factor). Apart from that, it was enjoyable.

First off, I love the backstory/concept of this game. I think the use of color lends well to the overall feel, as do the sprites. Unfortunately, I did also run into similar collision issues mentioned in previous comments.

This game was brutal. I think the fight was well paced with the way the attack patterns change combined with the progressive feeling of the background music. The way you broke up the foreground and background city ruins using contrasting solid colors made the environment visually interesting without making it impossible to read what was going on in terms of game play.

This game's visuals are great, the HUD is really easy to read, the sprites are cute and really well done. The scattered remains on the dungeon floor were a great touch. The sound design adds a nice level of polish for a gamejam project. I think what surprises me most though is the depth of gameplay from the enemy variety and powerup options.

This is mainly just for me to track my progress, and hopefully establishing this thread as a devlog will help me get started. Since my previous game jam (My First Game Jam: Summer 2018) entry was super basic, I'm hoping I can step up the complexity, this time featuring more than one level, actual enemies, and the sort of content that makes a game feel like a game.

My personal goals are:

- to learn something
- have actual gameplay
- be longer than one level
- have more than one enemy type, at least 3?
- end on a boss fight (at least one)
- finish the game (obviously)

Only having 2 buttons apart from Start and Select is an interesting design constraint. My immediate thoughts are heading towards something that involves jumping or shooting.
Reply
My First Game Jam: Summer 2018 community · Posted in [ ! ] Post-Jam Playtesting! Share your games here!
NK2 years ago

Pitch/Information: You are a wayward soul wandering a dead mall in search of something to drink. Run, jump, and feel the crushing emptiness that is the dying institution of "the mall."

I'd like feedback on:  The visuals - the character sprites, the background tiles, the colors used, technique, etc. Also, anything else that stands out to you, but given the simple nature of the game.

I need help on: Background tiles- this, apart from music, was probably my biggest hurdle during this project. Next, music theory, the music was made by clicking on random notes on Bosca Ceoil until I landed on something that sounded decent. I'd appreciate any resources on either of these things, preferably geared towards an absolute beginner.

Oh my god, I made a game. There isn't a lot to it, a total of 4 screens, and all you really do is go right, but it's done.  It barely meets the optional theme. 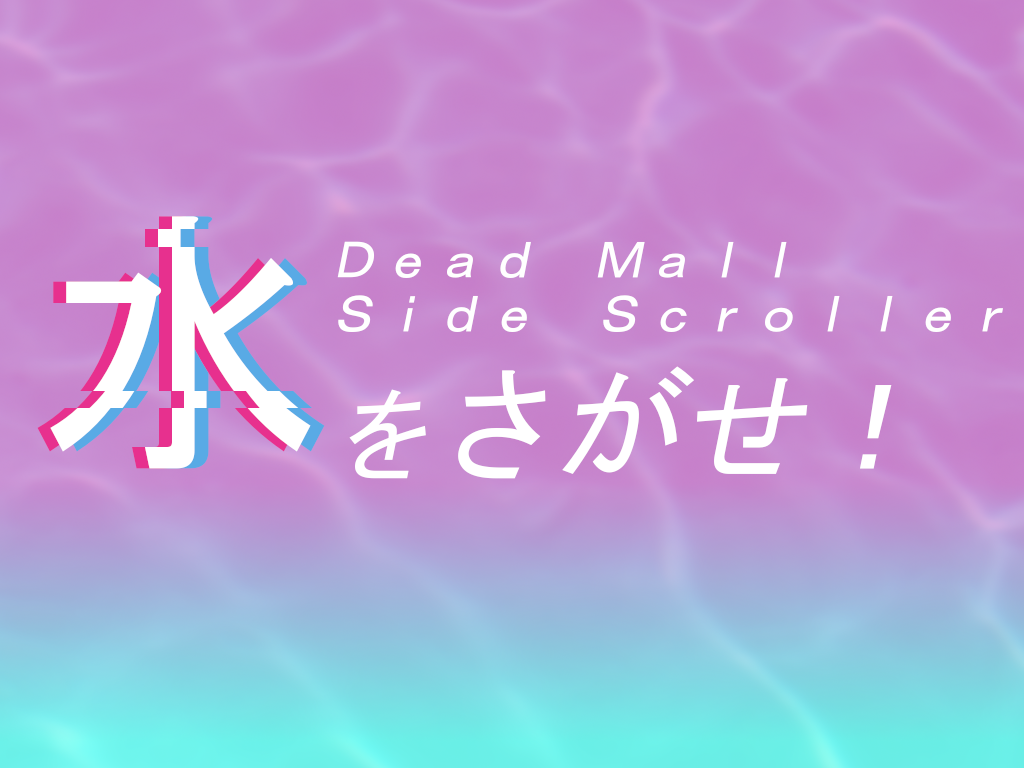 The goal of the game is to find something to drink- and the only vending machine is on the other side of the mall.

Clearly, I didn't keep this devlog updated, but between my day job, learning how to use Game Maker2/GML, and making assets for the project, the devlog fell through the cracks. Although, I did personally track my progress, and I'll do my best to format it for a devlog.

Most of, if not all of the first week of the jam was devoted to just learning Game Maker 2. Starting on 7/17/18, I started looking into whatever I could find in the way of learning Game Maker 2 from the perspective of the absolute beginner. I ran through the built-in GM2 Demos, both for DnD, and Code. At first, I thought I could get away with doing the whole project in DnD, and very quickly realized that I would not be able to. I shifted gears, and dove into GML tutorials. Read a lot of the documentation, watched a lot of videos. On 7/18, I threw together a test sprite and I managed to put this together.

While this isn't the most exciting thing ever, seeing Testguy move and jump in response to the inputs kind of blew my mind.

I ended up hitting a standstill from the 19th to the 22nd, as I went on a 3 day trip with my roommates.

From the 23rd to the 26th, most of the work for the actual project happened. I decided that the game was going to be something SUPER basic- all you really do is move to the right and jump. Since this was my first game jam, even with the two week period, I wanted something I could finish.

For a long time, my project looked like this. No tiles, no background.

J: I have been scouring a lot of the Gamejam's resources and a lot of GM2 tutorials wherever I can find them (which turns out, is a lot, I was kinda overwhelmed by the flood of information I found). I finally was able to get some pixels to move on the screen when I push a button, but not sure if it was anything worth updating the devlog for.

watercolorheart: not 100%, but with what I've learned recently, I might be able to push out something that is 2D and single-screen

I'm really glad this game jam is 2 weeks because there's no way I'd be able to crank something out in just 2 days, like most game jams. That said, today I tried starting a design doc, only to realize I'm not sure what I could feasibly make, or how little I knew about GameMaker 2. Just to have something done, I started project file and tried to throw together a splash screen with placeholders. First wall - how to fade from and into black.

1. Hi there! What's your name? Want to introduce yourself?

Hello. I'm NK. I have a background in art and design, but I'm inexperienced with programming.

2. Did you participate in the last jam we held? If so, what do you plan on doing better this time? If not, what's your reason for joining?

I did not. This is my first game jam ever.

3. What games are your favorites? Did any of them inspire you, or made you want to make your own?

My all time favorite game is Killer 7. In addition to the works of Suda51, I'm really inspired by Hideki Kamiya, Shinji Mikami, and Hideo Kojima. More recently, I've become a big fan of Sean Velasco after playing Shovel Knight.

4. Do you have experience with game development? What did you do/with what engine?

I've done a couple of the built in tutorials for Game Maker. In terms of asset creation, I've done some sprites and animations for a roommate's project. I occasionally found errors in some of his GML code, if that counts. Aside from that, not a lot.

5. Tell us about something you're passionate about!

6. What are your goals for this game jam?

Honestly, just to finish something that runs, hopefully with a title screen, gameplay that won't crash.