Sorry I’m not quite understanding. Are you having problems with the source code? There should not be any issues with it. If you are attempting to recreate it I’m afraid I won’t be able to help as I can only provide support for the projects source code here on itchio. By the sound of it you’re trying to attach something from the canvas to the player, you cannot do that without complex code modification.

I’m quite surprised by 2017, glad it worked. As for the workaround for the file, if you take a look at the full length course on YouTube, the pinned comment has the solution :)

i don’t think it will work in 2017, it was developed in 2019.4... Have you tried any other project after changing platform to android? Also, does everything else work normally? Like the buttons, scene switching etc? If you’ve added code for the mobile controls, is it correct code? Maybe test a little and see how it goes. Still worth contacting Unity Tech too and see if they know anything about bugs when switching platform

hi there, that is an issue with the engine rather than the project and assets. What version are you using? If you try different versions and have the same problem, you may need to contact Unity Technologies to report a bug.

This is my second request for you to add credit to the relevant places due to my assets being used.  Please do not ignore this request

As you’ve used some of my assets without credit, please can you add the relevant credit here on itchio, in the game itself and anywhere else this game exists physically or digitally.

Best of luck with the project.
thank you

works fine in version 2020. Please explain what you mean by “can’t use it”

yes you can use any character you like. I recommend looking through Mixamo

glad you got it sorted. Feel free to leave comments on the videos if you need to know more :)

hiya, so the way you do it is to unzip the file first and put the folder in your documents. open the Unity hub and click on the add or open button at the top right. Then locate the folder you just unzipped and click open. It may take a few minutes to build the project, but it should work just fine. Let me know if you’ve managed to get it up and running :)

Oh hey! Thanks for playing :)

So in a nutshell, if you played it again, it randomizes the location of some of the of items, which causes slight anxiety as you think you know where the items are, but they've moved and because know you're timed, it puts pressure on. Basically, it's just a quick way of showing how to do timed things in a game.

I could have made this waaaay better if I'd have developed longer than 12 weeks, but then that defeats the object lol.

oh wow that’s awesome! Ask away and I’ll do my best to help. Hope you don’t mind, but I’d like to share this game on my channel.

This is amazing! A spectacular take on the original, and almost flawless as well. Keep up the good work and NEVER stop developing!

This is the full project file, meaning the completed version. The full tutorial is only for Patreon and YT Channel Members at the moment.

Make sure your Unity installation is done correctly and has the android build support. If need be, you can check the first tutorial in the series and see what I do - timestamp 02:29 in the video

appreciate the feedback. If these are the only issues then I’d say I’ve done a good job with this game.

you mention the word “realistic” however, the aesthetic of the game is not realistic, so I don’t think it should detract from the experience

the way I see it is that what you’ve listed are very, very minor issues, especially when you consider the amount of issues in games which have a massive budget

once you own the code, it’s yours to do whatever you like with :)

I've shared your video on my channel. I'm genuinely impressed with how good you got :)

Thanks dude! I was expecting a lot of comments about the side to side movement, and it's just the design choice. Basically it's so as you can't pick it up and "cheese" it. It makes you learn how to play it rather than just be ANOTHER game :)

EDIT: You're actually really good at it! Best I've seen so far :D 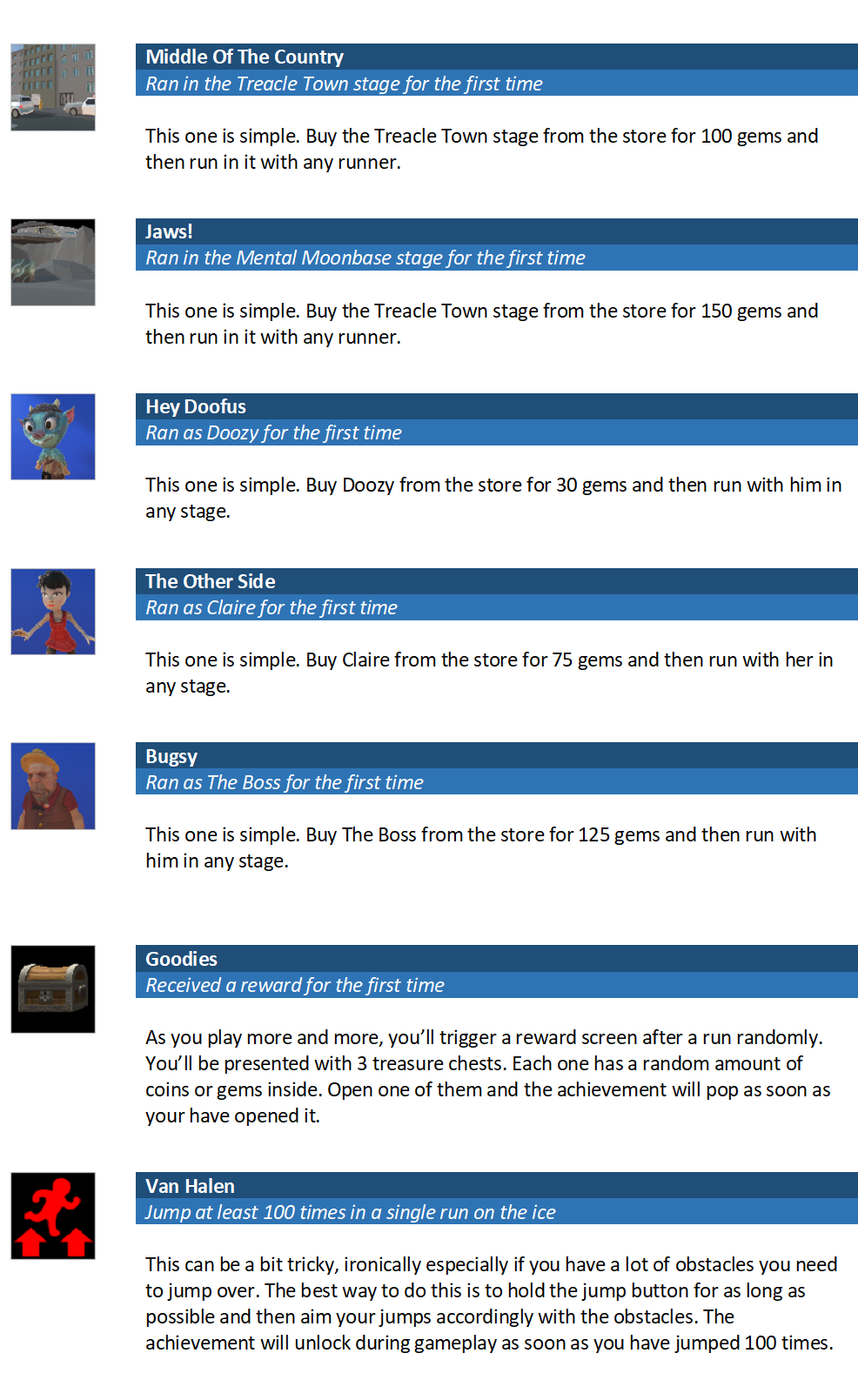 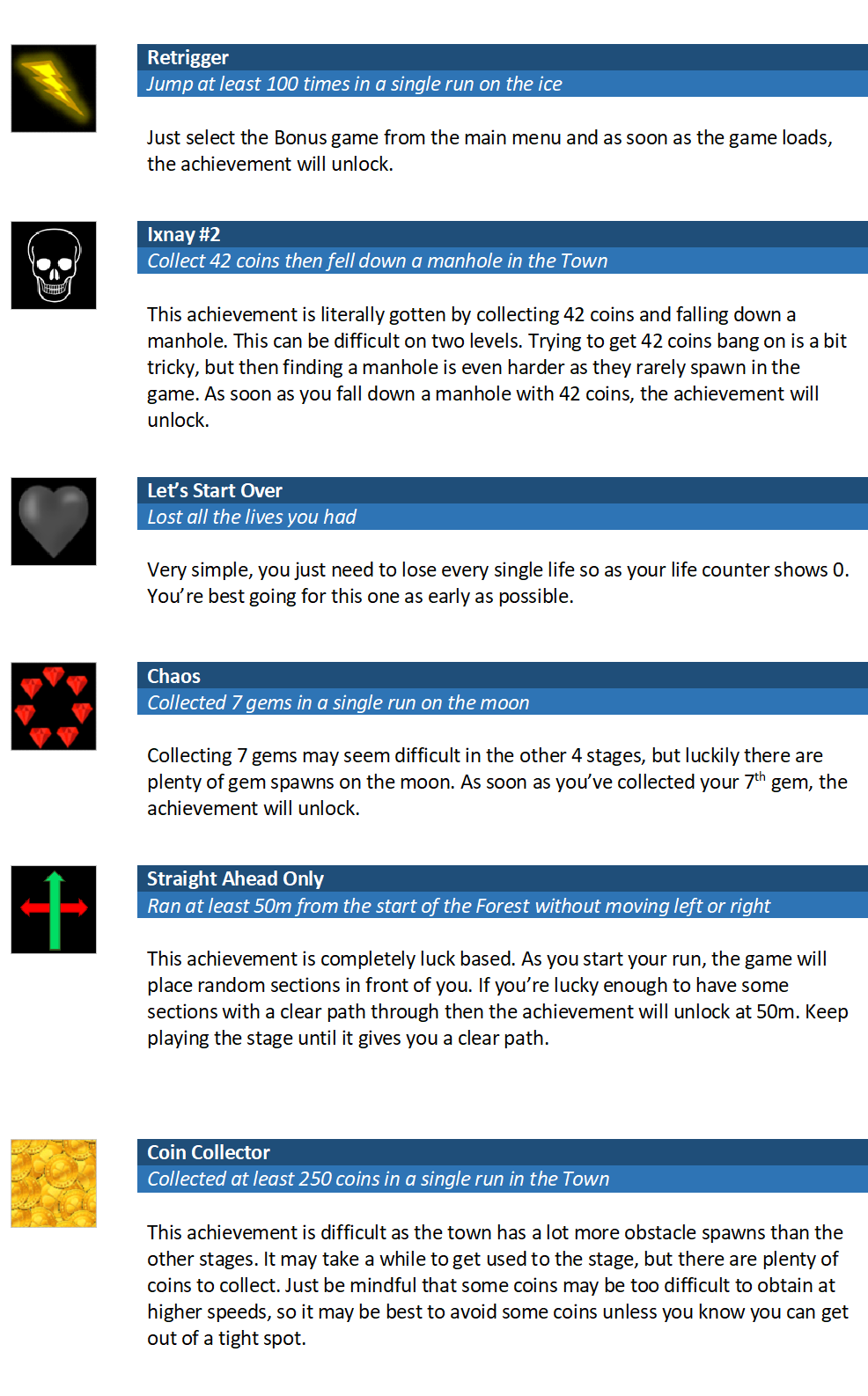 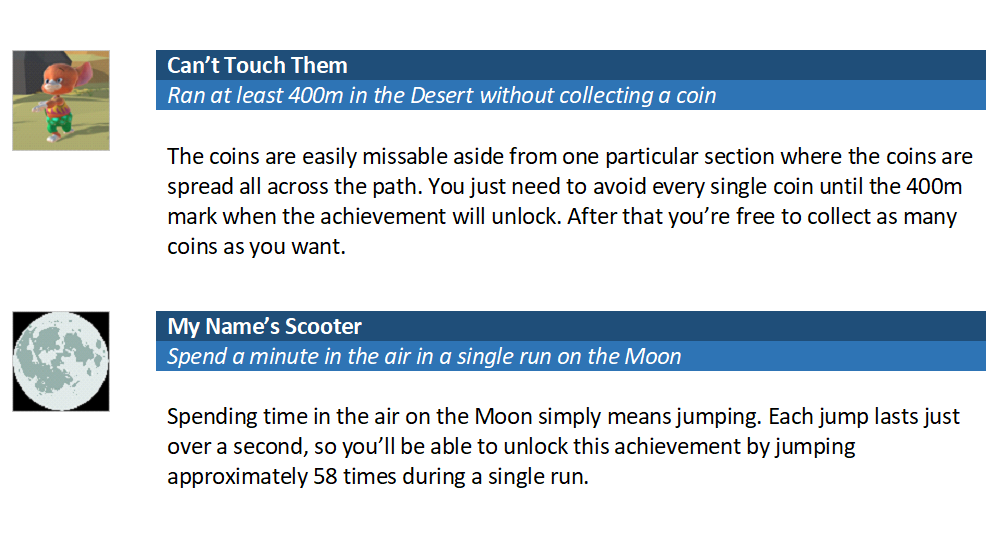 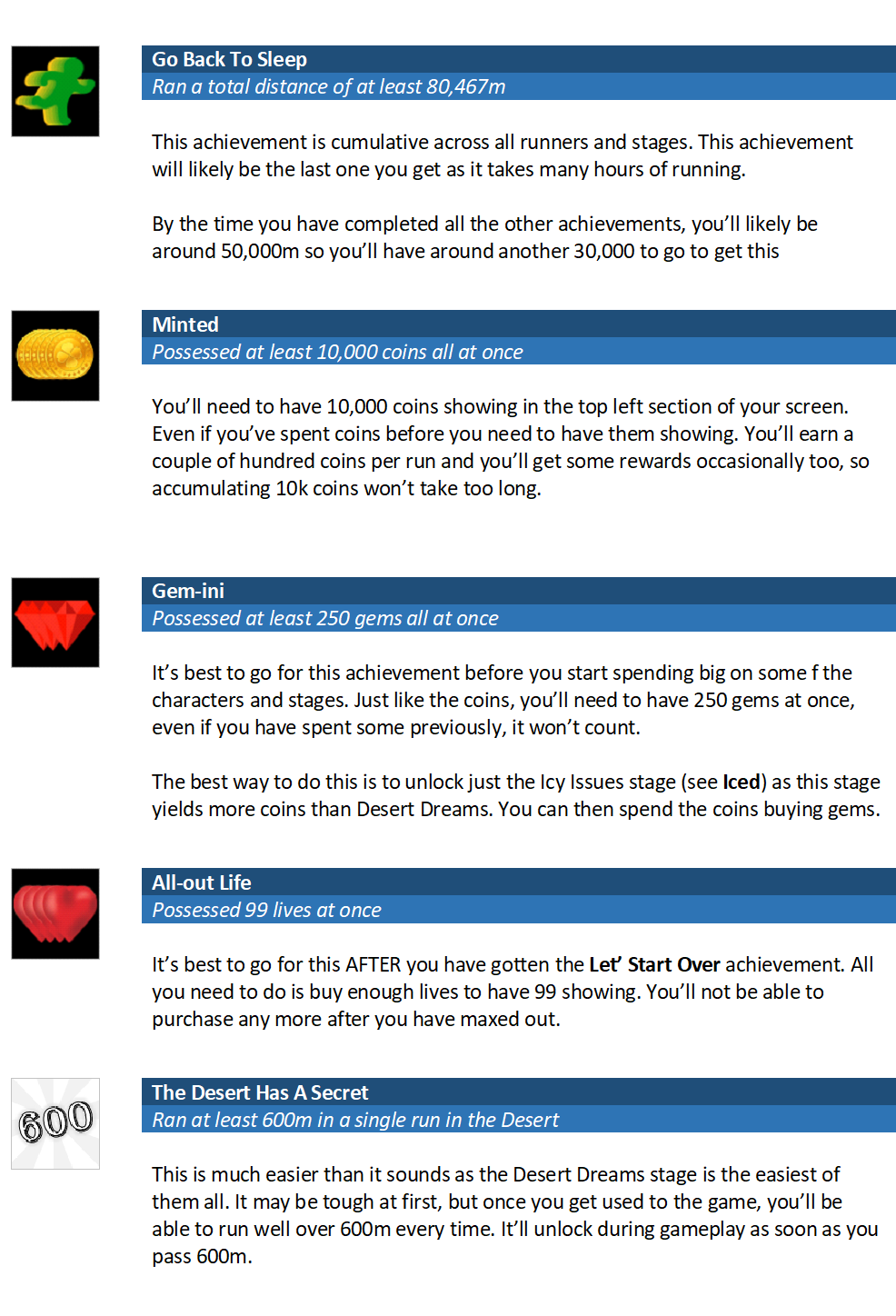 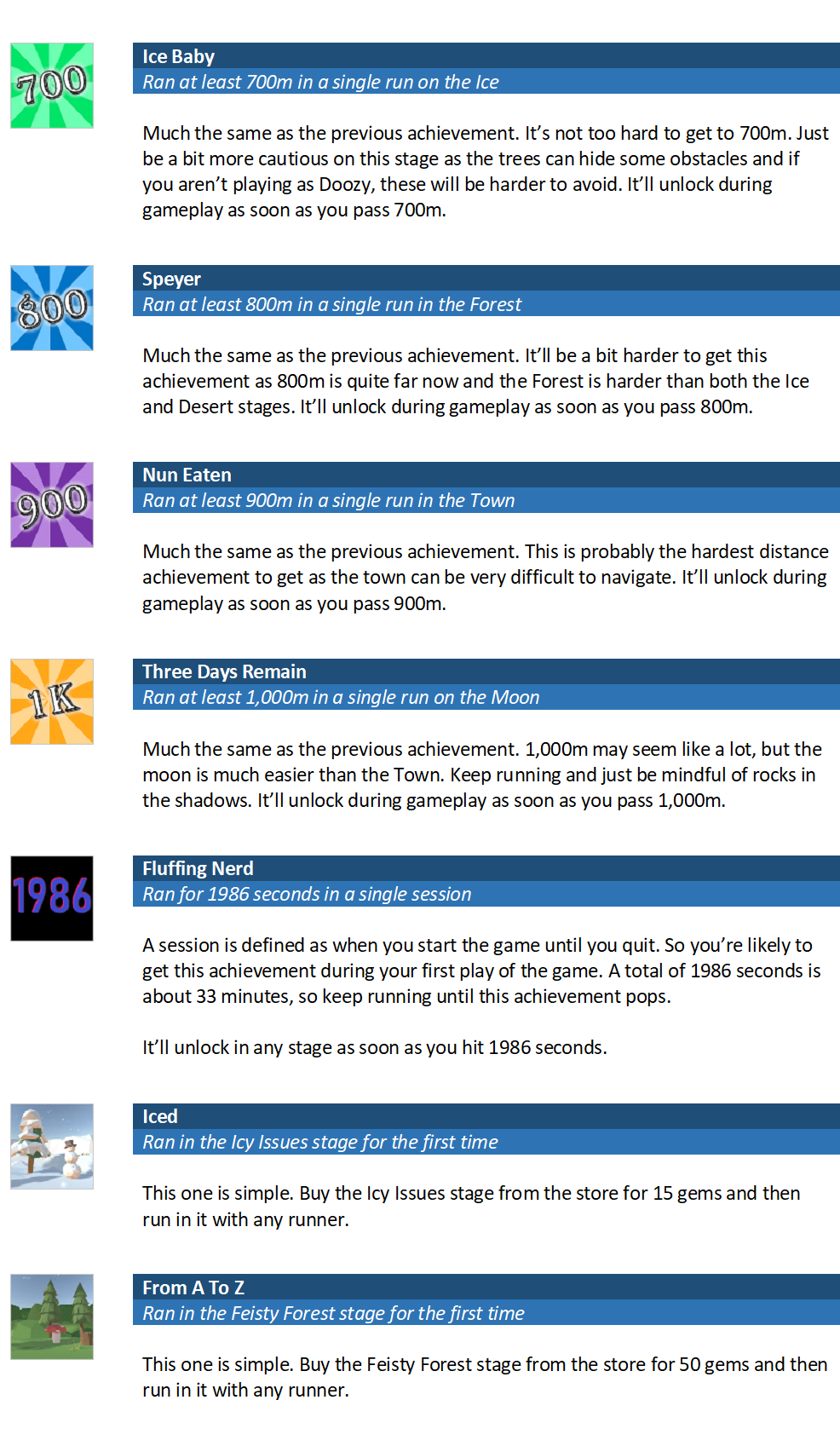 Overview:
Timmy & Mousey is a FREE Endless Runner game for PC created by Jimmy Vegas using the Unity engine. All 27 achievements are easily obtainable but may take longer for more inexperienced players.

There are various orders you could complete them in, for example, you’re probably better off going for the Let’s Start Over achievement before the All-out Life achievement.

Strategy:
1. Play through the 10 lives you start with and run as far as you can collecting as many coins and gems as possible. Try to run at least 600m in the Desert Dreams stage. You should hopefully get at least one reward during these 10 lives. After you’ve lost all 10 lives, play the Bonus game. At this point you should have these achievements:
The Desert Has A Secret
Goodies
Retrigger
Let’s Start Over

2. Buy a mix of lives and gems. If you have more than 15 gems, purchase the Icy Issues stage and play it. If you haven’t got enough gems just yet, keep going just a little more until you have enough. Once you have Icy Issues stage, play it and run as far as you can. Try to run at least 700m and collect as many coins and gems as usual. You can also attempt to jump 100 times in a single run too. Keep going until you lose all your lives again.

At this point, you should have a lot more coins and gems than you did when you first lost all your lives. By the end of this step you should have these achievements:
Ice Baby
Iced
Van Halen

3. If you have enough gems, purchase Doozy. His ability to move side to side quicker helps a great deal in avoiding obstacles. Spend all your coins on lives and gems and if you have enough gems, buy the Feisty Forest stage. At this point, play the forest and try to run at least 800m. You can also try to run 50m from the start without moving left or right, but it’s dependent on which sections randomize into your run. If you have been playing the game without stopping, you’ll also have played more than 1986 seconds. Keep running until you’ve lost all your lives again. You should now have:
Speyer
Fluffing Nerd
From A To Z
Hey Doofus
Straight Ahead Only

4. This step requires the most grinding as it’ll take a while to build up 250 gems. You should hopefully have enough coins to max out your lives, so purchase all the lives you can. Remember that all the while you’re building up gems, you’re also running closer to that 80k mark for the first achievement. Keep running until you have 250 gems. This shouldn’t take too long as long as you keep getting rewards. Once you have 250 gems, purchase Treacle Town and Mental Moonbase. Run in both of these stages attempting to run 900m and 1km respectively. You can also attempt to get 42 coins and fall down a manhole in the town as well as collecting 250 coins in a single run. You can also try to collect 7 gems in a single run on the Moon. If you can, you can also try to spend a minute in the air on the moon. By the end of this step you should have:
Gem-ini
All-out Life
Nun Eaten
Three Days Remain
Middle Of The Country
Jaws!
Ixnay #2
Chaos
Coin Counter
My Name’s Scooter

5. At this point, it should have taken round about 10 hours in total, and you’ll have ran about 50km and amassed a bunch of gems and coins. Use them to buy Claire and The Boss. Keep running in various stages and at some point, run in the Desert Dreams stage and don’t collect any coins for 400m. By the time you get to the end, you’ll definitely have 10,000 coins. After few hours running, you’ll finally unlock:
Go Back To Sleep
Minted
The Other Side
Bugsy
Can’t Touch Them

All achievements are listed in order of appearance in the game menu.