Game #40rty One [dash] Se7en
Get your people aboard a balloon (or is it the moon?) Based on an EE Cummings poem.
Jeff Black
Moonlight Hippos and the Dreaded Croc
A cooperative game where you help four friendly hippos get to their watering hole before the Dreaded Crocodile arrives.
Jeff Black
Bears in Squares
Can you make it to Buckingham Palace without being mauled by bears in time to see the changing of the guard?
Jeff Black
The Jumping Jackrabbits of Rootabaga County
Leap over the tallest building and reach for the stars.
Jeff Black

I have made a few small changes to the rules document that will hopefully make the print and play experience go smoother. Thanks for having a look and enjoy the game!

Hi - I'm Jeff Black - a game designer from Massachusetts, USA. I just want to say hello and to wish all participants the best of luck. I can't wait to see what amazing creations come out of this year's jam!

"I think your game's message is unique and under-represented. Bonus points for the possibility of cute artwork too! (Sea otters? Come on. Adorable.) I'm confident you know way more about kelp forests than I do, but could man-made damage be brought more to the forefront? Does that drive the great eco-friendly message home more or is that too much? I'm also confident you can take this idea and turn it into something great!" .

I agree with Chris' sentiments! The theme of this game is clever and unique - and the artwork builds an immersive little world on your table. Highlighting the cute animals and their efforts to survive and thrive among challenges is engaging and very kid friendly. This could be a game that educates without being an 'educational game'.

Can't wait to see where you go with it next!

Thanks so much Chris! We'd love to see a HABA treatment for this game. Their components are so perfect - and the croc is already one of their pieces!

Glad to hear the rules were clear enough to be understood  and that you had some fun giving the game a try.  Especially glad that the timing of the endgame was so perfect - that was one of the trickiest parts to figure out in the design. Good point about the reference cards. We are taking a look at haw scaling the game could work too.

Given the amount of bits this game's ultimate fate might not be the PnP format !

Thanks again, and keep well!

Thanks Robin! Yes - the different cubes are different types of grasses - except for the pink and purple ones (maybe those could be berries), and  the white ones which are lions.

First let me say thank you for taking the time to play ‘Hippos’ and for your amazing and insightful feedback. Let me take a moment to address some your points individually.

Glad to hear it - the amount of time players have was one of the hardest things to playtest quickly.

You are certainly correct about this game taking a ton of components - I think ultimately it would serve better as a non-PnP game but for those who happen to have lots of bits laying around it can work in a pinch.

Anywhere on the board is ok.

These are free actions.

The game plays best at 2 and 4 players. 3 players is ideal for maybe a parent playing with 2 younger kids where the grown-up controls the extra hippo. We also play as a group of three and just share responsibility for the fourth hippo.

Designing with my son is the highlight of every game we make. I hope you get to share that same fun someday! Keep well, and thanks again!

I don't really have the opportunity to check this one properly right now - but looks like fun.

I feel like this would be a good ice-breaker type of game if played by new acquaintances. I also think it would be a lot of fun to play with close friends with whom you share common slang, nicknames, etc. It both cases it would play differently but effectively. It seems to be both competitive and cooperative as there is cooperation within teams but competition between teams.

Looking forward to having the chance to check this one out further in the future.

My crew and I have enjoyed checking this game out. It was easy to assemble, learn, and play. The theme is cool and some of the flavor text on the cards is hilarious! (Exploding Pandas and Laser Penguins in Madagascar come to mind!)

It would be cool to see a little more integration of the theme with the mechanics. For example maybe a custom 52 card deck with icons/symbols that would tie in to the spy-theme.

This is a nice game! The rules seem clear. The diagrams with the labels on them are very helpful and make set-up very easy.  The components have a nice unified look to them. The artwork overall reminds me of games from the publisher Oink Games. The theme is certainly topical to the moment but the presentation is friendly enough to make it playable as an escape too.

I like the way there are secret goals and public goals. This leads to some uncertainty as to the score until the very end of the game when the winner is determined. I should point out, however, that the game is not a co-op.

All in all we had much fun checking this one out.

Thanks for the feedback! Yes, players can choose not to take all 3 of their actions - I'll clarify that in the rules doc.

This game was designed to be an entry-level, family weight cooperative game for kids, families, and anyone who wants to play! It features action selection and set collection as mechanics.

What about a category for best game for elementary/primary school aged  kids?  In the interest of transparency, this category is where our game would best fit, but I figured there might be others for whom this would be a good fit too.

Nice! I love the choice of source material.

I've attached a link to the original poem by A.A. Milne. https://engpoetry.com/a-a-milne/lines-and-squares/

Thanks for having a look at Bears in Squares! If you have any questions or comments please share - I'd love to hear them. Enjoy the game!

Reply
Gaming Like It's 1924 community · Created a new topic Can I edit after submitting the game?
Jeff Black1 year ago

If I submit the game today can I still edit the rules until the final entry date?

A rule was accidentally left out of the rule book. If the spotted rabbit is covered by more 'allow' cards than 'prevent' cards, the rabbit can leap.

Be the first player to see their rabbit leap over the world’s tallest skyscraper and land among the stars!

The Jumping Jackrabbits of Rootabaga County

Many years ago in the county of Rootabaga, in the center square of a great city there was an exhibition. A great display of power and grace! On that fine day several troupes of gifted jackrabbits set out to leap over the tallest building in town to reach the chains of gold that hung elegantly from each bright and wonderful star in the sky above. Many jackrabbits could clear the building, but how many among them can truly reach the stars? Plus you’ll need to be savvy enough to avoid the pesky flocks of birds that keep getting in your way.

In The Jumping Jackrabbits of Rootabaga County you are the leader of one of these bizarre and talented troupes. If one of your rabbits can reach the golden rope and climb to the stars before any of the others, then you’ll win and be crowned ‘Champion of the Stellar Jackrabbits’. 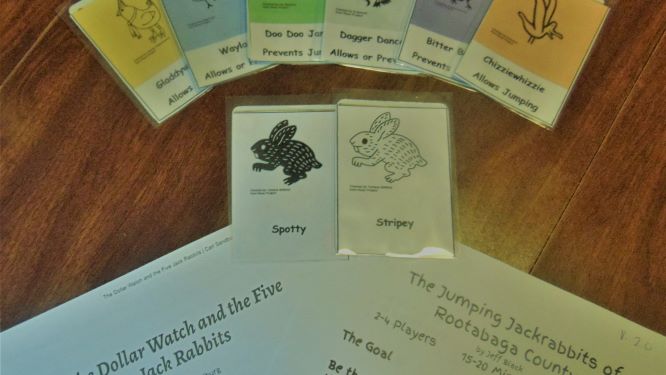